On February 14, a gunman carried out an appalling crime at Margory Stoneman Douglas High School, killing seventeen people and wounding a further fourteen. While the school shooting has become a depressingly familiar feature of modern media, in this case, the coverage often focused on the victims who were there and escaped unscathed. Within a few days, they had committed themselves to the idea that this should be the last school shooting. Shortly after that, conspiracy theorists did what they often do: accused the victims of the real crime of feigning crimes that never really happened.

The “crisis actor” idea is a fairly new phenomenon, though the accusation that protesters and activist are being paid is as old as politics. The term crisis actor comes from real disaster preparedness drills during which medics or first responders prepare for mass casualty events. Actors or volunteers sometimes portray shooting victims, lying around in realistic makeup and covered in stage blood to give the drill a sense of realism. I first saw the idea that there were bands of paid crisis actors after the Sandy Hook shooting, and now they seem to be a common element of the mass shooting conspiracy genre. Jason Koebler at Motherboard has traced the earliest use of the phrase to a 2012 press release from a Colorado company called Visionbox that provides exactly this sort of service.

Conspiracy theorists think that if they—or think they—recognize the same person at two events or if they can catch supposed victims “out of character,” they have shown that the event is a hoax, or at least not what it appears to be. Part of the problem is that school shootings generate lots of similar press coverage: people anxiously waiting outside of the school while talking on their phones, crying, hugging, having press conferences, and so on, so there may be a strong sense that you have seen this all before. In the case of conspiracy theorists, they take it a step further and say they have seen the same people doing this before. For instance: 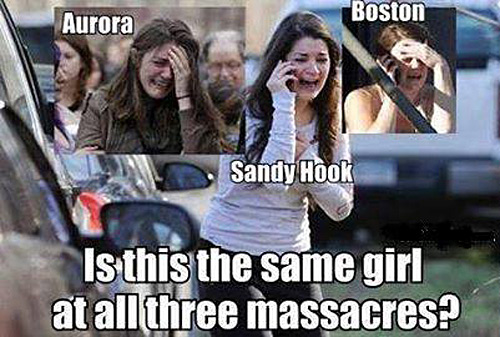 The vague similarities in the poses of women in horror on their phones is evidence enough, say conspiracy theorists, to say with confidence they are the same person.

Conspiracy theorists often confuse cause and effect. They ask the question “who benefits from a tragedy” (“cui bono?”) first and then assign blame retroactively on those who might benefit. It may give you a scapegoat and someone to blame, but it ignores the contingency of history. In this case, because the event is perceived as bolstering the case of those who would oppose certain 2nd Amendment rights, so think the conspiracy theorists, those political actors must be responsible. Generally they are liberals. (It was the same thing after the BP spill in the Gulf. Clearly, it was environmental activists destroying the Deepwater Horizon to … further the environmental agenda by … destroying the environment … for some reason.)

The Parkland shooting conspiracy theory is unique to the current bizarre cultural moment. One student, Ben Hogg, is accused of being coached to act like a victim because he is the son of a retired FBI agent (pictured below). 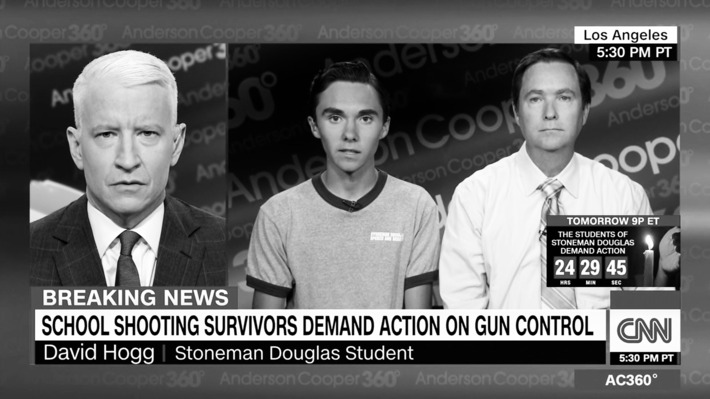 Conspiracy theorists will focus on the “FBI agent” part and not so much on the “retired” part. This is remarkable because in recent weeks, as Special Prosecutor Robert Mueller’s investigation into possible collusion between the Trump Campaign and the Russians has yielded numerous indictments, many on the far right have turned on the FBI, which has been recast as a hive of socialist G-men. And who, you may ask, is really in charge of the liberal agenda the FBI is carrying out? Well, according to a tweet from former sheriff and Law Enforcement Clown David Clarke, it’s George Soros, of course! 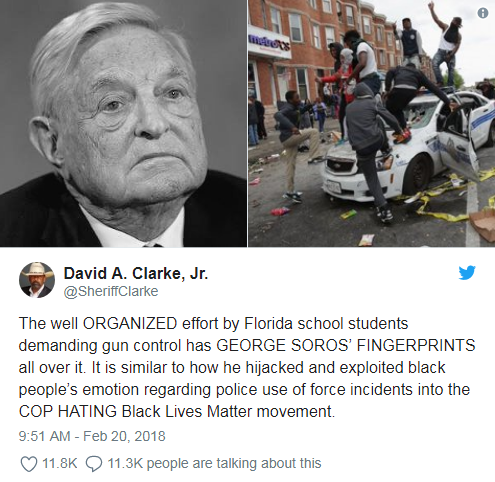 Invoking the name of George Soros represents a lot here. He’s the boogeyman the members of the Freedom Caucus warn their kids about at night, in much the same way the Koch brothers are the boogycreatures of the left—puppet masters using their vast sums of money to directly manipulate the minutiae of the news cycle. I think that most mainstream conservatives see Soros as a meddling liberal figurehead. White supremacists, however, may see him as a rich international Jew controlling world events. These ideas have long genealogies. (In fact, one way to identify a conspiracy theory is when the explanation precedes the event that it is meant to explain. In this case, “set up a fake shooting to generate sympathy for banning guns” existed long before the Florida shooting. Conspiracy theorists just pick the bits they think fit the pattern and ignore disconfirming evidence.)

Another factor that has contributed to the rise of this conspiracy theory is the NRA’s Wayne LaPierre, who actively promoted conspiracy theories about Barack Obama for years, repeatedly putting forward the argument that President Obama was coming for all the guns. This despite the fact that the former president really never talked much about gun control before Sandy Hook, and despite a Supreme Court decision expanding handgun rights in D.C. LaPierre has primed his public to expect a conspiracy against 2nd Amendment rights. And believing is often seeing. If you expect crisis actors, you’ll see crisis actors. If you expect to see a shadowy cabal of liberal Jews bent on disarming Americans and ushering in tyranny, you’ll see a shadowy cabal of liberal Jews. If you expect pandas, you’ll see pandas.

So, how do you defend yourself against these sorts of conspiracy theories, ones that are drawing on recent news where the whole story has not yet come out? 1) Get your news from multiple sources; there is no reason to consider an extraordinary claim to be true until you see it confirmed by multiple competing news outlets. 2) Be wary of wild, emotionally charged stories that appear in social media, and certainly don’t share them. Nobody has any business getting their news of the arrival of the New World Order from you. Let them hear it from the UN or the aliens…or whoever is now in charge. 3) Be suspicious of the motives and objectivity of stories that demonize or make sweeping generalizations about large groups of people or which break the world down into black/white dichotomies. 4) Follow links to the sources of stories and don’t bother with stories that don’t show you their evidence.