An Interview with Michael Blanford of the James Randi Educational Foundation

With an academic background
in zoology, Michael Blanford began his career
as a field biologist, studying amphibians and reptiles in the United
States and Costa Rica. While Blanford enjoys doing research, he has
spent much of the past fifteen years promoting science literacy and
appreciation. He has developed science curricula,
programs, and informal content for a number of institutions, including
schools, community centers, and museums. Most recently, he was
coordinator for the St. Louis Science Center’s Life Science Lab, an
innovative space with the mission of exposing the public to the tools
and methods of scientific research.

Blanford
lives with his family in St. Louis, Missouri, where he spends much of
his spare time promoting grassroots skepticism through a number of organizations.
Blanford is founder of the St. Louis Skeptics Meetup, founder and
president of the Skeptical Society of St. Louis, co-founder of St. Louis
Skeptics in the Pub, and has served as
vice president of the Rationalist Society of St. Louis, America’s
oldest continuously meeting freethought organization.
The James Randi Educational Foundation (JREF) appointed Michael Blanford
as its new director of educational
programs in March 2010.

That
same year, the TAM8 Teachers’ Workshop gave tips, tricks, and practical
advice for teaching critical thinking through classroom demonstrations,
lessons and exercises, and mind-opening mini lessons. The Education
Advisory Panel, formulated in November 2010, has been working on creating
and improving resources for a range of ages. 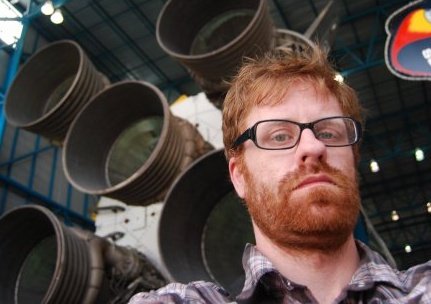 Michael Blanford: I
first stumbled across the skeptical community through the evolution
and intelligent design wars, something I was very engaged in. [They]
led me to Skeptic magazine and Skeptical Inquirer. It’s
something I’ve been very engaged with ever since. My background is
in biology. I started out by doing science; it’s part of what interested
me and still does. But I also thought I was more interested in talking
about science. Modern scientists are so hyper-specialized, and you work
in this narrow-knit field—it’s not something that is especially
good or bad, it’s just the way it is.

I
always wanted to talk about the broader aspects of science, and [I]
started moving more into the education/outreach side of it. I’ve been
really lucky, having a lot of opportunities to do many things in many
different contexts [such as] working for the Center for Inquiry with
their Camp Inquiry and as a lead science facilitator. I’d never been
to camp before, and I didn’t even know camp culture [and] here I was
coming up with science and skepticism content that you do for five hours
a day with kids ranging from seven to seventeen.

Blanford: Yes, and I
came away from it having learned a great deal, even just after one week.
It was a fantastic, if exhausting, experience. [I] learned a lot and
just loved it. I’ve done curriculum design in a bunch of different
settings; I had a really great experience maybe eight or ten years ago
where I had a teaching friend who asked if I wanted to collaborate with
[her on a project funded through] a grant. She was interested in developing
this curriculum … for talking about amphibians with fourth and fifth
graders.

It
turned out to be a huge project, a three- or four-year project funded
by the department of education to develop these modules and lesson plans
with supporting materials. It was a conduit for teaching these kids
how to develop and undertake legitimate scientific studies. We’d be
in the classroom during the day studying reproductive biology and then
out in the ponds at night, breeding wood frogs and sharing our data
with graduate students who were working on related projects. You really
see [that for] these kids, who had been science-faired to death at this
point, … there was something to the authenticity of really getting
out there and collecting data that could show up in the literature.
[It] had a profound impact on them.

I’ve
also been involved in skepticism on the grassroots level for a while:
I was vice president of the Rational Society of St. Louis, which is
the oldest Freethought organization in the United States. I’m also
the founder of the Skeptical Society of St. Louis and co-founder of
the St. Louis Skeptics in the Pub. So I’ve come to this position with
the JREF from a number of different directions.

Blanford: Well, I’ve
been interested in talking about critical thinking and skepticism in
education. The organized skeptical groups have been talking about education
forever and it appears to be the center of all these organizations’
missions, but we haven’t had too much to show for it. So it’s good
timing and something that I have a passion for. [I think] I have a diverse
background … [in both] grassroots skeptical communities and education—and
it appears that the JREF agrees!

Sturgess: So what do
you think the focus will be in terms of audience for the resources that
will be produced?

Blanford: Certainly
the broad educational program that I’m overseeing—skepticism in
the classroom is one aspect that we’re looking at—[is] the one that
there’s the most interest and demand for. Right now we’re looking
at what we call middle and high school here in the United States.

The
focus is on critical thinking and the value of methodological skepticism
in the context of examining the claims that we as skeptics highlight:
ghosts, UFOs, cryptozoology, and all those things. What’s great is
that we have all these tools to talk about critical thinking and these
topics can be both compelling and really fun. That’s something I really
enjoy about this. Look at Daniel Loxton, whose Junior Skeptic
produces these great lessons that are also a heck of a lot of fun to
read. I’m not oblivious to that.

Sturgess:
Do you think that there’s a lack of resources for critical thinking
in the U.S.? Will this be filling a gap?

Blanford: If you look
at just critical-thinking resources out there, there’s actually quite
a bit: books, modules, videos. All those sorts of things have been out
for a while [as] resources on the Internet for example. But as for resources
relating directly to the paranormal, pseudoscience, fringe science—the
kinds of things we’re interested in—there’s very little. There
[are] elements that teachers have produced for a while, things that
have been posted to forums, little bits and pieces here and there. One
of the things we’re looking at doing is producing resources that teachers
can use, but another important part is building a networking infrastructure
for those who are working in the classrooms out there.

[Now],
during [the] web 2.0 era, it is a prime time to be building this network.
I don’t think that many of these teachers have had this chance before—and
many of them know what works and what doesn’t—so trying to leverage
their experience and listening to those people who have been invested
in this for a while in an advisory role [is important]: people like
Barbara Drescher and Matt Lowry and yourself. It’s important to do
this carefully from an evidence-based perspective … to produce materials
that are going to work. The last thing we want [is programs] that are
not practical and can’t work in the classroom setting.

Sturgess: There’s
a significant body of research that points toward efficacy with resources
in terms of what really works in classrooms. What support do you think
the JREF might supply if there are indeed great resources but teachers
come across opposition or censorship? We are, after all, not talking
about “neutral” topics when we tackle topics like ghosts in the
classroom, UFOs, and the like.

Blanford: Yeah, you’re
right, and this is something that [we] can be informed [about] by teachers
who have been teaching evolution in schools and have faced resistance.
(It’s depressing just hearing me say that!) I think that some of them
may have had experiences that will provide some insight on how to deal
with this. [Part of dealing with controversy] is learning how to frame
these topics [by] connecting them to either state or federal educational
standards [and] fitting them into that. It’s something that we’re
certainly going to have to take very seriously so we can provide support
for these teachers. Maybe take a lesson from the intelligent designers
and call them “academic freedom classes” or something. There’s
branding in what they do; maybe in that regard we can follow them.

This year, JREF will be
presenting an Educators’ Workshop on April 28, 2011,
with the St. Louis Science Center. The workshop is for middle-school
and high-school educators interested in improving the critical-thinking
skills of their students through examination of the paranormal and the
pseudoscientific.