It’s CSICon Sunday Paper time! One of best parts of our community is the short lectures told by people who generally aren’t known as main speakers. Many of these people are professors, researchers, scientists, or maybe just someone with a passion about a subject. You will usually find these kinds of lectures at SkeptiCamps all over the world, but for the past few years they have also been on Sunday morning at CSICon. I have written about past Sunday Papers as well as interviewed several of the presenters, and you can read about them here…

For CSICon 2017, I am going to talk about the five paper presentations as well as give you a link to videos I shot of each one, so you can watch them for yourselves. These papers are all organized and curated by Ray Hall several months in advance. Every person who wants to present has several steps they need to follow for Hall to choose them. Hall says that he not only looks for quality but timeliness and how it will fit with the other papers. It is a lot of work not only on Ray but also the people chosen. Slides are presented weeks in advance, and each presenter is on a tight schedule. You need to be well rehearsed. 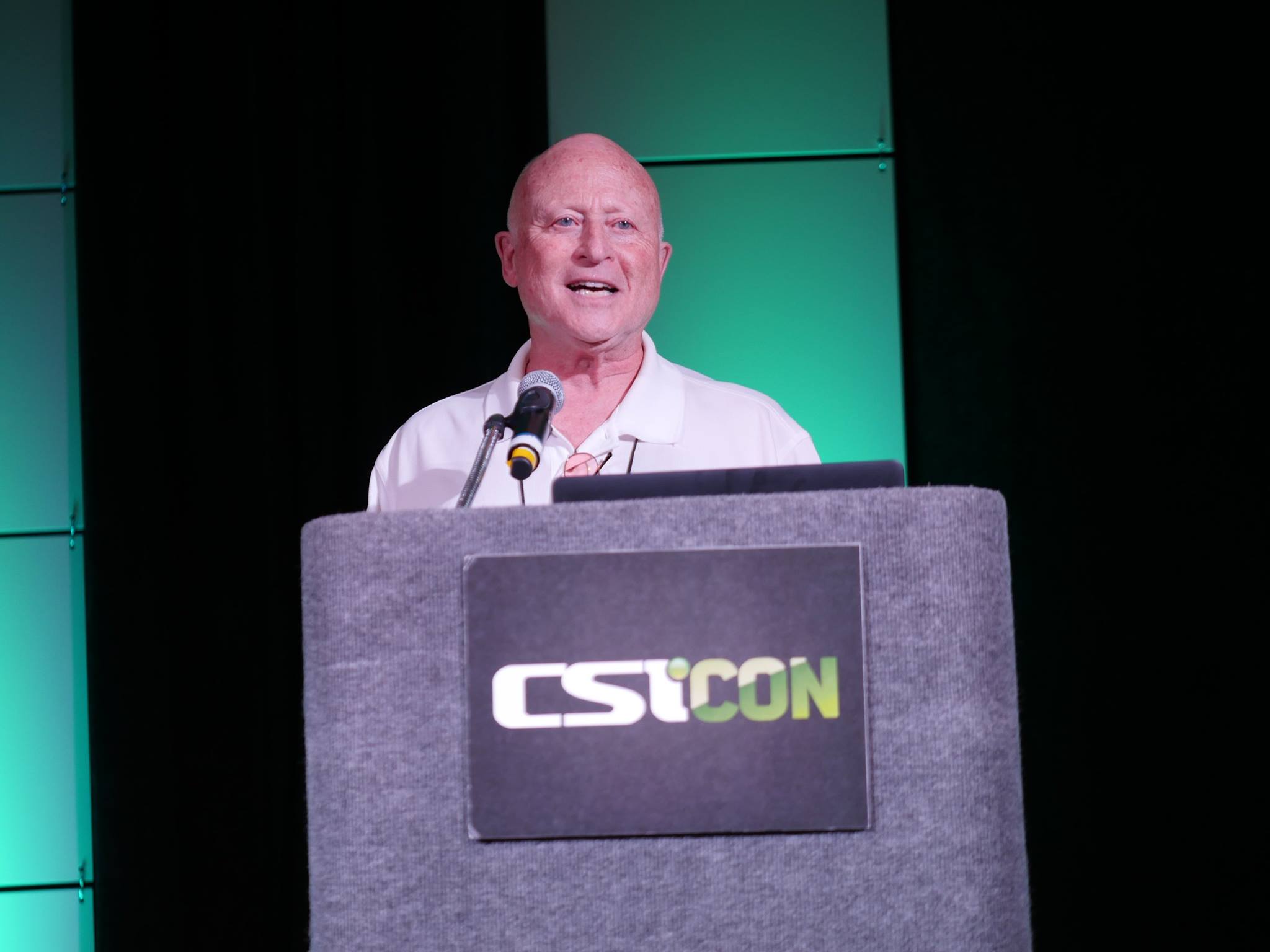 First up is Charles Wynn, who is an emeritus professor of chemistry at Eastern Connecticut State University where he teaches a class on critical thinking. Wynn is also the author of Quantum Leaps in the Wrong Direction, which is on its second edition. I first met Wynn at the Eugene, Oregon, Skeptic’s Toolbox back in 2002. His paper this year was called “Deconstructing Pseudoscience.” He talks about how we can teach people to recognize pseudoscience and how to stop the spread of bad thinking. He said that we can teach people to “recognize the disconfirmation associated with their beliefs” and how to pay attention and see red flags. He did a survey in his college class at the beginning of the semester, asking them about their level of pseudoscience belief. The majority showed most held beliefs in the paranormal. Then he surveyed them again at the end of the class, asking the same questions. The post-survey showed improvements in all areas with the exception of two topics that showed no change—creationism and ghosts. Wynn thinks that if educators focus on real science vs. pseudoscience, teaching what red flags to look for, we will make stronger inroads teaching critical thinking skills. The most important piece of wisdom students need to leave the class with is knowing that when something seems too good to be true, they should question it. Here is a link to Wynn’s video. 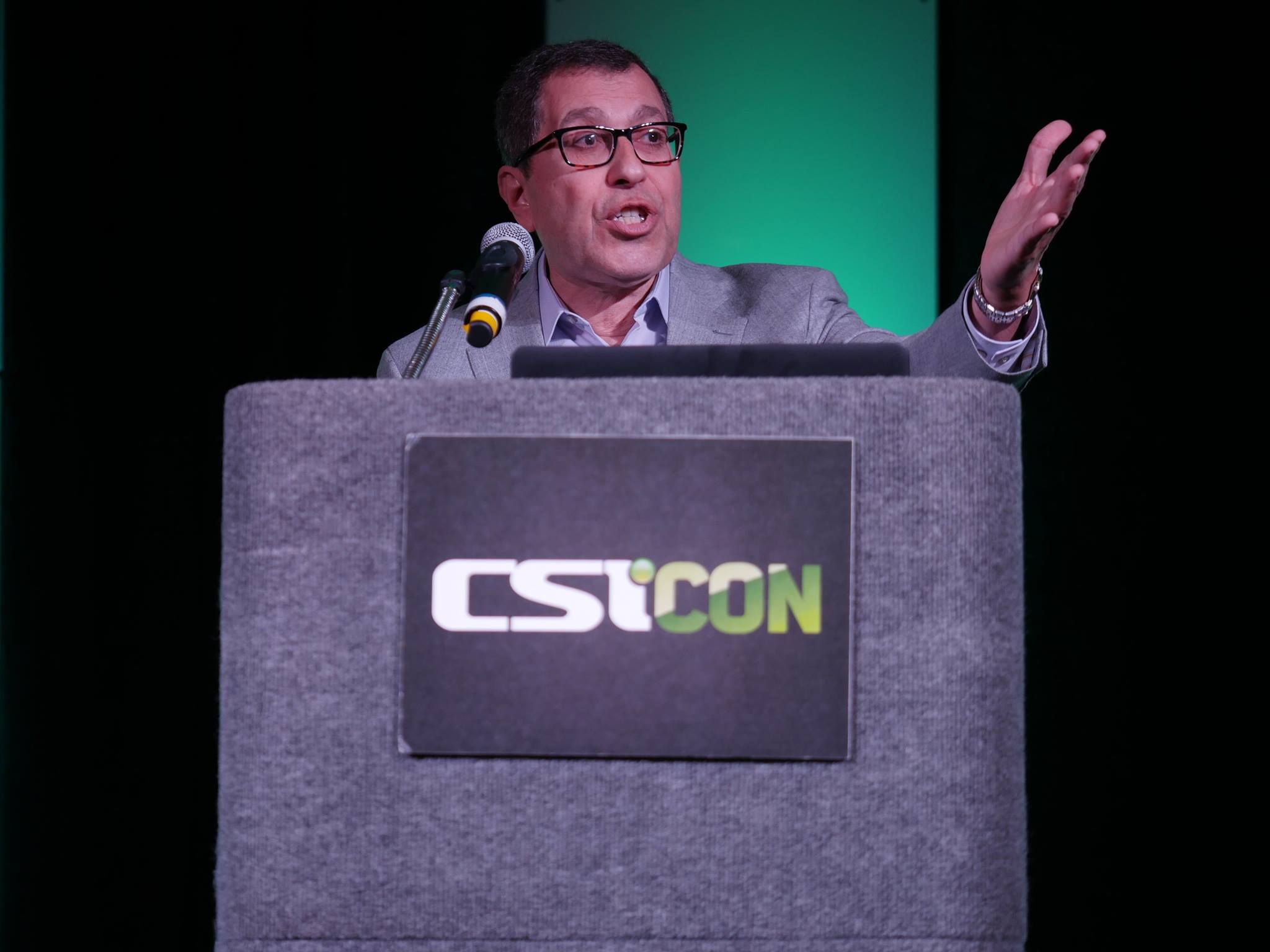 Neurologist Fred Nour was the next speaker. He is the author of the book True Love: How to Use Science to Understand Love (coauthored with Loren Rolak). In this Sunday Paper called “Is Functional MRI the New Phrenology?” he first talks about the history of phrenology, which was the idea that the brain has regions or zones that correspond to emotions and specific functions. While science does tell us that this is true, phrenology left science and moved into pseudoscience; it was quite popular in the early 1800s. Functional MRI is a modern technique (it dates from 1990) that measures brain activity by measuring blood flow. They use brain scans and … well, to be honest with you, I tried to read the Wikipedia page, but it is quite complicated. According to Nour people who are practicing fMRI are reading too much into the statistics and making claims that are incorrect. He says that they are making the claim that networks are independent of each other; Nour says that is not true. Parkinson’s disease and depression networks are continuously interacting with each other. Scientists have discovered the love center in the brain, according to Nour, and stimulating or damaging it will not cause a change in love. In 2009, a doctor named Bennet duplicated the fMRI study of humans reacting to happy or angry faces. What Bennet did was the same study but instead of humans reacting, he used a dead salmon and got the same results. That must have been a wild study. In 2016, scientists reviewed data from fMRI supporters and found a 27 percent success rate. The magazine Nature insisted on seeing the data from fMRIs and not just the conclusions. Nour concludes that the modern fMRI is phrenology all over again. Video is here. 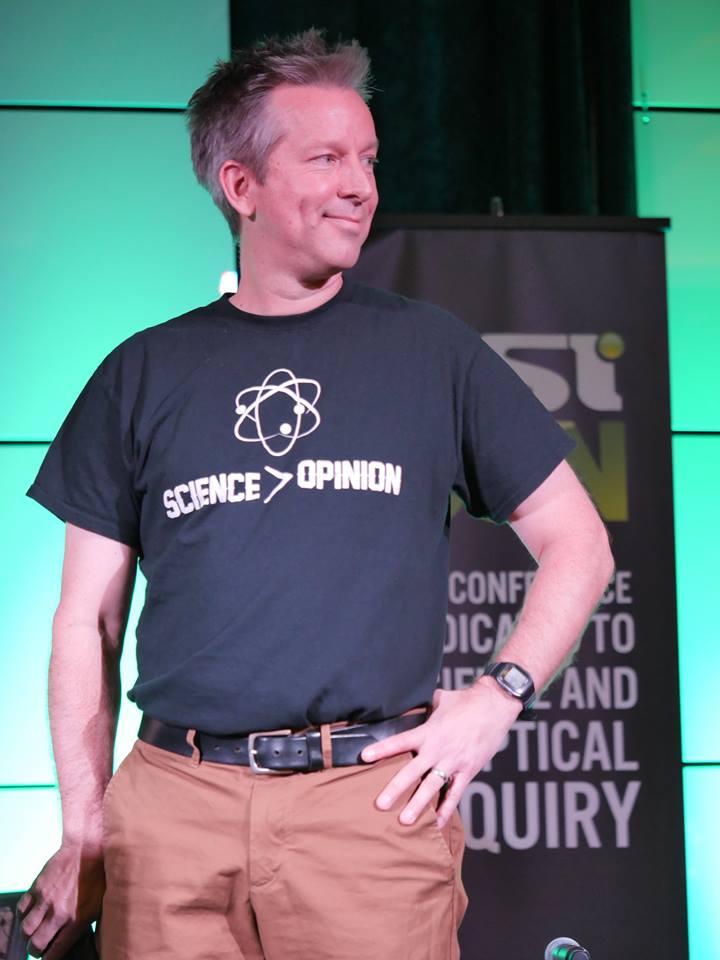 Our third presenter is a good friend of mine that I met for the first time at CSICon 2016, Craig Foster. Foster is a professor of psychology at the U.S. Air Force Academy in Colorado. There he teaches a critical thinking class, and he is also a very big sports fan. You can read all about his 2016 Sunday Paper presentation in this interview. Foster’s 2017 paper was called, “Does God Influence Sports? An Empirical Investigation.” Foster tells us that about 25 percent of U.S. residents believe that God influences sports, and athletes and fans commonly talk about God’s influence. So Foster wanted to see if this was something that can be tested. “Does God use sports to reward faithful athletes or to promote faith itself?” He explains that this is really difficult to even begin to test when you consider that some colleges are religious and that possibly a terminally ill child would have asked God to intercede on the outcome of a game. So how can you weigh whose prayer means more than another’s prayer? Foster looked at the past five years of men’s and women’s NCAA basketball championships, only the first round. I won’t go into the results here of what he found; you will need to watch the video to find out. But he came away with some really great questions and felt that the answers could be really important if we could be sure of the answers. Why would God support one faith over another? Why would God care about sports when there are more important social issues? In the end, Foster thought that a believer would just end up saying “God’s influence is subtle, unpredictable, or untestable.” Here is the link to Foster’s presentation. 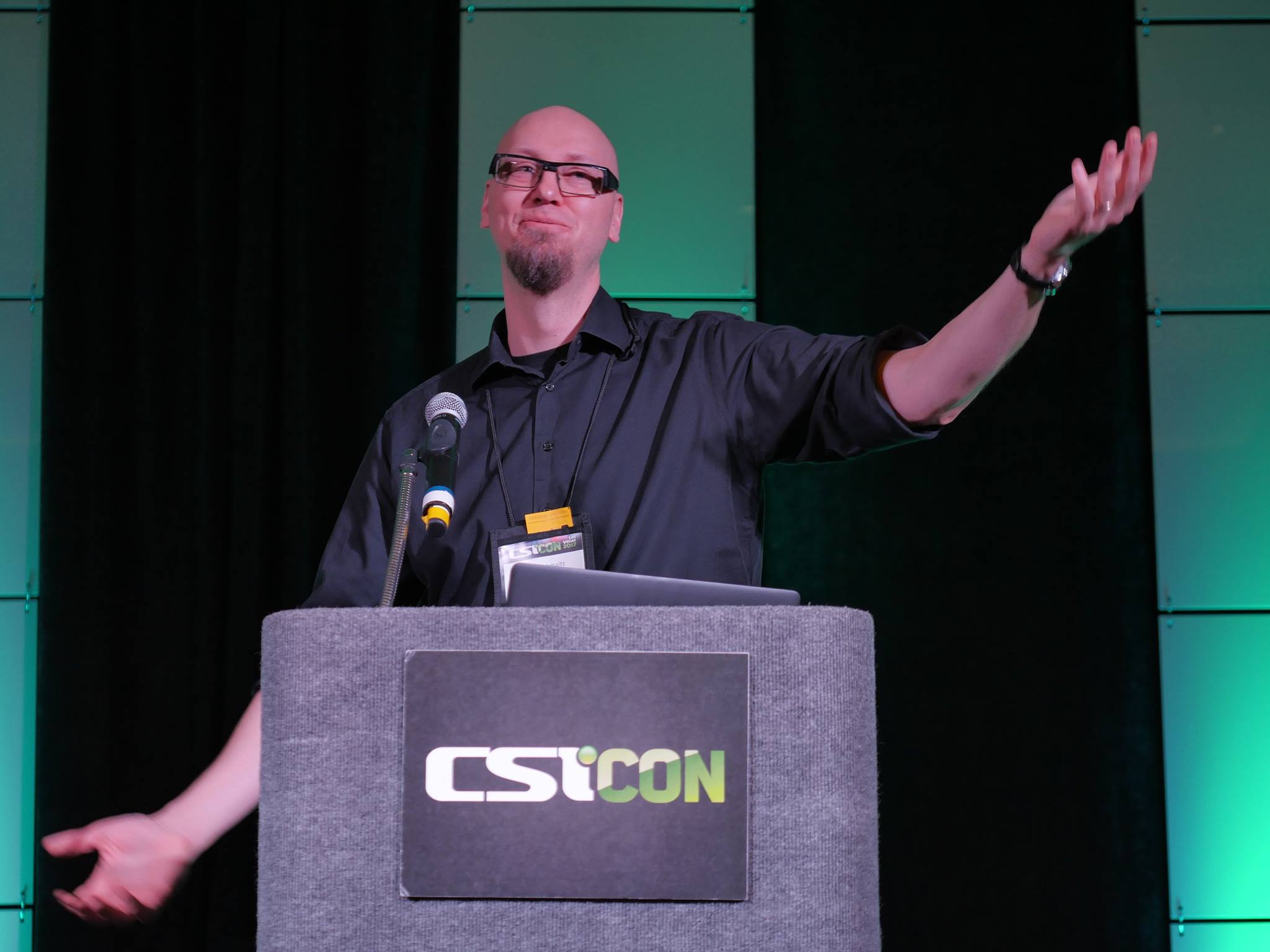 Rodney Schmaltz is an associate professor of psychology at the MacEwan University in Edmonton, Alberta. His paper was called “The Need for Scientific Thinking: Teaching Students how to Detect Baloney.” He surveyed students at the beginning of the semester and asked on a scale of 1 to 5 what they thought their level of critical thinking was. Almost everyone said 4 or 5. He also discovered through the survey that most had a high level of belief in the paranormal. He postulated that this disconnect is because students are told they are learning critical thinking skills, but that term is so broad and ill-defined that they could be learning just about anything and told it was critical thinking. Schmaltz suggests that schools focus on scientific thinking.

Schmaltz and a psychology honors student, Nicole Wenckowski, have put together an hour-long lecture with three demos. These are very simple demonstrations focusing on astrology, a card trick, and a newspaper psychic prediction. Rodney and Nicole are magicians, but they took the advice of Wisconsin Assistant Professor Tony Barnhart who is also a magician when trying to decide on the demonstrations. One of the challenges Schmaltz found was getting permission to work with people under the age of eighteen. When trying to get approval from the IRB, they were questioned why in their survey asked about students’ belief in God, and then another question asked about the students’ belief in the Loch Ness monster. The IRB committee felt this line of questioning could be insulting to students, equating a god belief with cryptozoology. Schmaltz also discovered that there are for-profit groups writing and trying to sell critical thinking classroom instruction. You can view the paper presentation here. 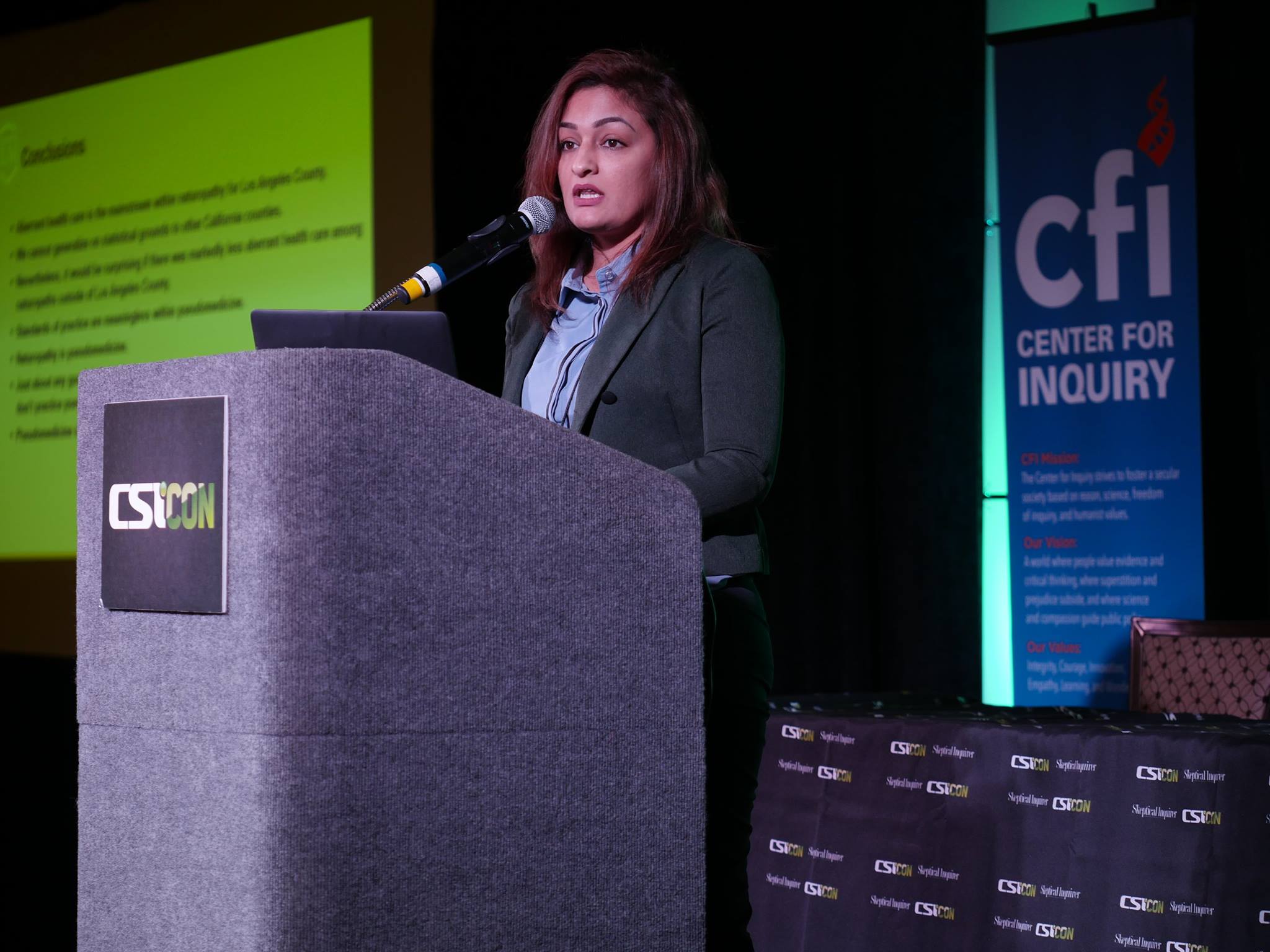 The last presenter for the day was William London and his grad student Parul Chouhan. They are at Cal State University of Los Angeles. London is a professor of public health and someone I have known for years, meeting him first at the Eugene Skeptic’s Toolbox. Chouhan is a grad student who has an undergrad degree in dentistry. This was her very first presentation. Their paper was called “Aberrant Treatments Promoted on Websites of Licensed Naturopathic Doctors,” and it was a review of websites from Los Angeles County. In California, naturopaths can be licensed, and London and Chouhan located 127 licenses that they used to find twenty-eight websites. In California, Senate Bill 746 allows naturopaths to give school physicals for students wanting to play in sports. Senate Bill 796 gives an extension to naturopath licensing until January 1, 2022, at which time there will be a provision to remove licensing.

Chouhan and London reviewed the twenty-eight naturopath websites looking for aberrant pseudoscience claims. They found that 100 percent of the websites contained some nonscientific medical claim. Hormone replacement and herbal medicine were on 64 percent of the websites, and homeopathy and intravenous nutrient infusion on 50 percent. London and Chouhan’s conclusion was that aberrant health care by naturopaths in LA County is mainstream. Naturopathy is pseudomedicine and should not be licensed. For video of the presentation, see here.

I hope you all enjoy the CSICon Sunday Papers as much as I do. I know it’s difficult to get up and functioning after the Halloween party the night before, but you really need to try. I might not be there next year to film. If you would like to present, please read the other interviews I’ve done with past presenters, because they offer some great tips. Also, I have videos from past conferences located on my YouTube channel. Ray Hall is terrific at helping you through the process of making a great presentation, and even if you arrive at CSICon knowing no one, by the time Sunday arrives you will find a friendly and welcoming audience. All details on how to become a Sunday Paper presenter can be found on CSI’s conference website. I look forward to writing about you next year.

All photos taken by Karl Withakay