An August 7 article in the Great Falls Tribune offered a shocking and discouraging statistic in its headline. The piece, by Kristen Inbody, “Survey: People think Native Americans don’t exist/aren’t discriminated against,” states that “For many Americans, tribes are relegated to history books. A recent survey found 40 percent of respondents didn’t think Native Americans still exist.” 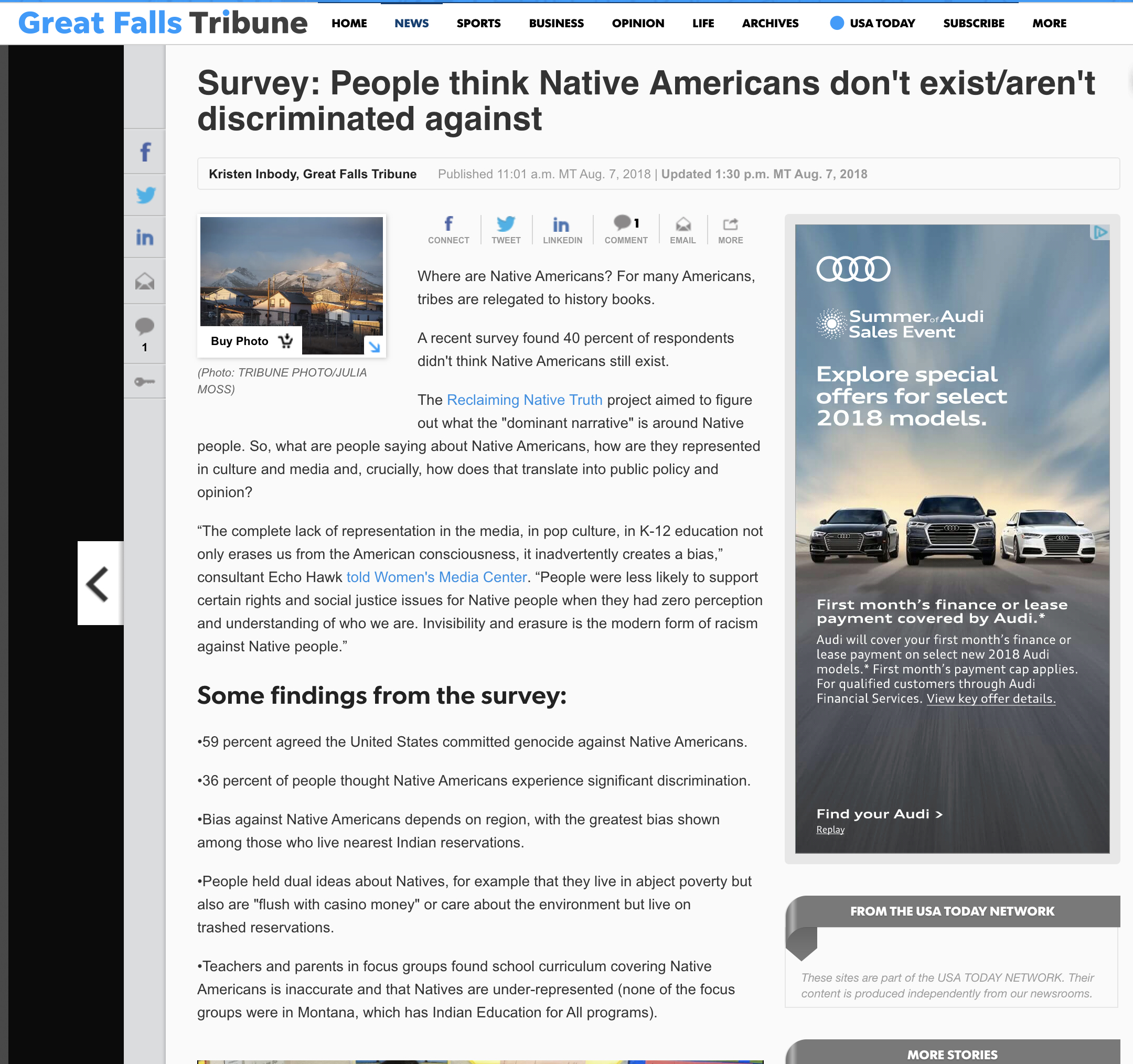 One commenter on the story, Emily Mayer, wrote that “Forty percent is an awful lot of stupid people. It’s time education changed in America … why are my tax dollars going to pay for so much stupid? Totally and completely unacceptable.” Native American activist Tara Houska shared the statistic on social media, also lamenting the lack of education: “40% of America thinks we don’t exist, yet 36% think they have ‘some Native ancestry.’ Education is critical.”

An August 10 piece on Red Lake Nation News asks, “Where are Native Americans? For many Americans, tribes are relegated to history books. A recent survey found 40 percent of respondents didn’t think Native Americans still exist,” and links to the Great Falls Tribune piece. Blogger PZ Myers picked up the story in a headline titled “40% of Americans don’t believe Native people exist?!?” and begins “That’s one of the results of a report on American perspectives on native peoples … we ought to be outraged at this level of ignorance—ignorance that dehumanizes.”

The comments were damning: A sign of American stupidity and lack of education. Dehumanizing. Outrageous.

But was it true? How is that possible?

I live in New Mexico, a land rich with pueblos and Native Americans. They are a part of everyday life here, and the idea that people would think that they don’t exist is absurd. Films such as Wind River, Smoke Signals, Thunderheart, and Dances With Wolves show both past and present native communities. America (and Canada for that matter) has a clear, tragic, and undeniable history of racism, treachery, and neglect of its native peoples.

From my background in psychology and research design, I wondered if the survey was the problem. Maybe the question was worded in a strange way or was confusing. Flawed polls are not uncommon; perhaps the best known was a Roper poll taken in 1992, which found that 1 in 5 Americans doubted that the Holocaust had happened. That shocking statistic was widely reported and touted as evidence of American ignorance about history—if not a sign of rising racism and anti-Semitism. A later poll found that one percent of those surveyed said it was possible that the Holocaust had never happened; 8 percent said they didn’t know; and 91 percent said they were certain it had happened. So what happened? The 1992 poll used a double negative construction that confused respondents: “Does it seem possible or does it seem impossible to you that the Nazi extermination of the Jews never happened?” I wouldn’t have any idea how to accurately answer that question, and most people didn’t.

Maybe the Native American survey’s sample size was tiny and just happened to encompass a large proportion of people who somehow thought that Native Americans don’t exist. There are many confounding factors in surveys that can result in invalid responses.

In order to unravel this mystery I did what journalists are supposed to do: I actually read the study.

With a few clicks of the mouse I opened the full report of the Reclaiming Native Truth survey that article was based on. I skimmed through it, did several keyword document searches, and then read it more closely. It’s an insightful, interesting, and important look at various issues facing Native Americans, including the use of sports mascots, discrimination, and perhaps most importantly how the use of framing narratives can help dispel myths about different groups (see pages 42 to 45). However, I eventually concluded that the headline statistic does not appear anywhere in the survey.

Puzzled, I contacted Inbody of the Great Falls Tribune to ask where that number came from—it was, after all, not a minor passing statistic but important and shocking enough to highlight in the headline and first sentence. Inbody soon replied: “The report was analysis about the findings. Rebecca Nagle of the Cherokee Nation released further information that explained the findings, such as the 40 percent detail.”

This response raised more questions than it answered; Inbody’s news article clearly stated that the 40 percent finding appeared in the study (hence the headline “Survey: People think Native Americans don’t exist”). She seemed to contradict her reporting, saying instead that the statistic came not from the study cited in the headline but from unspecified “further information” released by Nagle.

I responded to Inbody with a brief and polite request for clarification, but it went unanswered. Further web searches for that statistic were fruitless, so I contacted Nagle, of the National Indigenous Women’s Resource Center, and asked her where that information came from. She, also, did not respond to my query.

It seemed to be a phantom factoid, a bogus—yet newsworthy if not clickbaitey—shocking statistic that nobody seemed to accept responsibility for creating. Inbody first claimed the number came from the Reclaiming Native Truth survey, but later claimed instead that she got it from Rebecca Nagle, who won’t respond to confirm or deny it.

One of the most interesting aspects of this was seeing how people failed to challenge even a statistic that sounded dubious on its face. They responded with comments that suggested incredulity (“Really?!?”), but no one seemed to question the numbers. Media literacy and skepticism were entirely absent in most of the responses.

I first noticed this story posted on a friend’s page and noted, “This headline seems to be mistaken; I looked through the report and didn’t find anything suggesting that people think Native Americans ‘don’t exist,’” and I linked to a PDF of the report. She replied, “The first two paragraphs of the article,” and quoted them. It took me a few seconds to understand that she didn’t realize I had already gone to the original source and that she considered the Great Falls Tribune piece as authoritative. When I replied, “But the survey (linked to above) doesn’t seem to say that … If I missed it please correct me!” No one took me up on it. It seemed that people wanted to be outraged about the topic but not spend a few minutes to verify that what they were upset about was real.

Under the pressures of deadlines, reading a study is an easy step for a journalist to skip; after all, if you just have an expert comment on it, you can shift the burden of doing research to others. Quoting others is always easier than reading articles and studies. Usually it’s a safe shortcut, since the chances are that most of your readers won’t bother to read the study either; they will accept what you said that other people said the study said. Despite appearing as first-hand (if not first-class) reporting, it’s actually a kind of third-hand story, and with each iteration, details get dropped, misinformation creeps in, and facts get mangled.

This is of course only one of many news stories whose headlines turn out to be misleading, or outright false, upon reading the research that spawned them. In May of this year, I wrote about national headlines claiming that a recent study at Arizona State University found that college men think they’re smarter than women.

I read the news article (it took about 90 seconds) and found no reference at all to any research findings indicating that men think they’re smarter than women. Wondering if the relevant information in the headline had somehow been dropped from the article, I then clicked on the link to the research upon which the news article was based. The study, “Who perceives they are smarter? Exploring the influence of student characteristics on student academic self-concept in physiology,” was conducted by Katelyn M. Cooper, Anna Krieg, and Sara E. Brownell of Arizona State University (ASU), and published in the June 2018 issue of Advances in Physiology Education (Volume 42, Issue 2). You can read my full article here but the TL;DR version is that if you actually read the study it says nothing about men thinking they’re smarter than women.

Americans have misconceptions about a great many things and a demonstrable blindness to social problems facing Native Americans and others, but misinformation isn’t helpful. Native Americans face myriad real problems, but a significant number of Americans not believing they even exist is not one of them. As always, a healthy dose of media literacy is the best antidote to media myths.

Featured image is an ink drawing created by wsilver