When my friend Ross and I started a podcast
about investigating weird stuff five years ago, we didn’t know what kind of investigation requests we would get. There were the obvious ones: Scientology,
ear candling, 9/11 Truthers, oil pulling. What we didn’t expect was one request that cropped up repeatedly: essential oils.

My understanding of essentially oils was essentially (sorry) that they were concentrated versions of various smelly things: lavender, eucalyptus, rose. And
that aromatherapy enthusiasts used different smells to evoke different emotions or mental states. But aromatherapy turns out to be only a small part of the
essential oils movement. And to find out exactly what it entails, my cohost Ross and I joined a one-night class called “Essential Oils Have Amazing
Benefits!”

Ross and I live in Los Angeles, and the event was in Rolling Hills Estates, a small affluent community about thirty miles away. The chiropractor playing
hostess had a small shop on the upper level of an outdoor mall, complete with a Pottery Barn and a Starbucks, though the whole mall was dead by the time we
arrived at 7 pm. We climbed the escalator to the shop and entered a small, bare waiting room where a few chairs and a table had been set up for the class.
At the front of the room was a table on which dozens of oils and oil mixtures were displayed, accompanied by signs that touted their benefits: some were
for allergies, digestion, energy, healthy skin, and the all-encompassing “total wellness.”

“Welcome!” said Lucy,* the chiropractor who had offered her office up for the session. “Just sign in here, and we’ll get going.”

The room smelled of lavender. Along one side of the hall leading to the treatment rooms was a table covered in healthy vegetarian treats. We loaded up on
hummus, carrots, and crackers and sat down among the other students. As the room filled and finally evened out at twelve attendees, it became apparent that
essential oils are a female-dominated vocation. Of the twelve people, two were male: Ross and a little boy “forced” there by his mom. 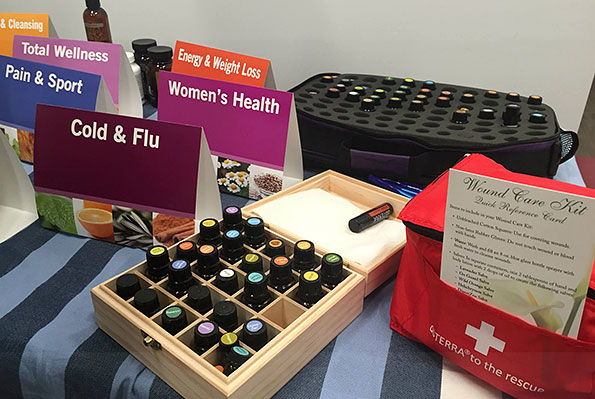 Alice,* the woman leading the class (which might also be called a sales pitch) was a “Wellness Advocate” for doTERRA, one of the leading essential oils
companies. Headquartered in Utah, doTERRA has “advocates” all across the country who sell oils out of their own homes and businesses. Much like Scentsy or
Mary Kay (or, back in the day, Tupperware), advocates make money from selling the oils at profit or by signing up friends to become advocates themselves.
If we chose to become Wellness Advocates, we were told, we would be wise to purchase a $550 starting kit. According to 2014 data, the most common sales level earns a
seller about $25,500 a year.

As we went around the circle listing our names and reasons for attending, many women shared that they were new to the essential oils world. Even Marie,*
who was assisting Alice with the presentation, had only been in the business for one month.

“My husband is a big skeptic, so when I gave him oils the first time, he didn’t believe it, but now he asks me all the time, ‘What have you got for this or
that?’”

Ross and I looked at each other pointedly, wondering whether her husband was just getting this oil stuff out of the way rather than hearing about it all
afternoon while he suffered through a headache.

“Now, I’m a lawyer,” said Alice, “And we have to tell you, essential oils don’t treat or cure anything. They just work with your body’s natural ability to
heal itself.”

This sort of hedging is common in alternative medicine circles. Words and terms such as helps, works with, aids, and complements hint at the idea that the alternative medicine isn’t doing the heavy lifting. This cleverly avoids potential litigation if the
“complementary” treatment proves useless.

But what does “works with your body’s natural ability to heal itself” mean? Every medicine works, in some way, with the body. If you put aspirin in a
bottle, nothing happens. But put aspirin in the human body, and it works with the central nervous system to relieve pain. Any medicine, then,
“works with the body’s natural ability” to heal or treat itself. The real question is how well that medicine works. 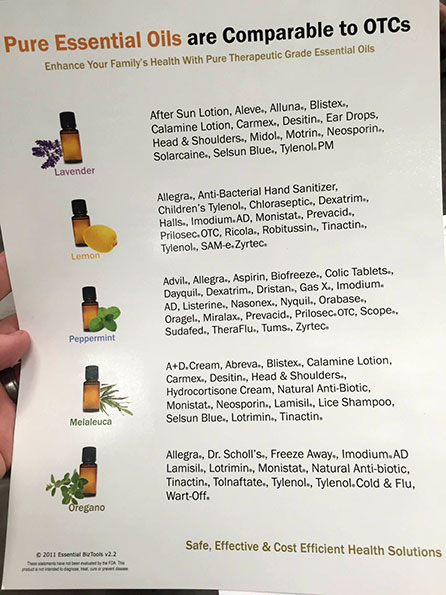 Essential oils marketers, like doTERRA and Young Living Essential Oils, claim that their products help with thyroid function, eliminating toxins, balancing hormones, promoting respiratory health, and improving immunity. Young Living even offers a product meant to be
applied “topically over the liver,” which costs $172 for about one tablespoon.

I asked Alice what would be best for my chronic stress headaches and migraines. She immediately launched into a
list of proprietary blends, as well as individual oils.

“Peppermint, eucalyptus, Past Tense, Deep Blue… Oh, there are lots,” she said.

“Deep Blue is amazing,” the woman next to me said, leaning in and nodding her head adamantly. “You want Deep Blue.”

I took a note of the name of the proprietary mixture. Deep Blue comes in a roll-on oil blend as well as a lotion and contains wintergreen, camphor,
peppermint, blue tansy, German chamomile, helichrysum (a sunflower-like bud), and osmanthus (an Asian evergreen). It should not be confused with the computer that plays chess.

Alice and Marie passed around samples of the oils, which everyone smelled and cooed over.

“Ooo, that’s nice!” we would say when something was pleasing.

“Hmm, interesting,” we would say when it was awful.

Alice continued her pitch as grapefruit oil went around the circle.

“On your feet?” I repeated.

“Yeah, on the acupressure point that corresponds to the body part you want to help,” Alice explained. “Or just put it all over your foot. That’s what you
can do with a child, if you don’t want them to lick it off.” 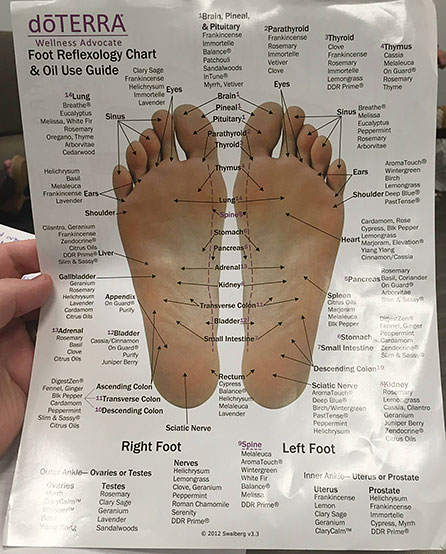 I pictured Marie’s daughter licking sandalwood oil off her arm.

After discussing the various oils for sale that night, the women passed around a book called Modern Essentials that, they said, was like the Bible
of essential oils. For nearly every problem, there was an oil to help solve it. I flipped through the book and found alleged oil solutions for countless
serious conditions: diabetes, cancer, even clubfoot. Even the woman next to us, a true believer, had to laugh at the thought of oils forcing a crooked foot
straight.

We decided to do a full experiment: Ross would try to treat his acne and sore shoulder (from a sports injury he incurred a year ago), and I would try to
treat my broken arm and headaches. Plus, we would loop in someone who could really step up our game: comedian Drew Spears would attempt to cure his cerebral palsy. According to one blogger, the cofounder of doTERRA encouraged her to use cedarwood
oil to treat her son’s cerebral palsy. (It should be noted that the blogger is also a doTERRA seller.)

I stopped at Lassen’s Natural Foods, a store near my home that was sure to sell essential oils. The cost was certainly not prohibitive: It cost about $30
total to buy two bottles of cedarwood oil (coincidentally, cedarwood is the preferred treatment for both Ross’s acne and Drew’s cerebral palsy) and some
eucalyptus and rosemary oil for my headaches. I combined my headache-fighting ingredients (including peppermint oil, which I already had on hand) into a
spray to use on my face when a headache hit. I would also apply lemongrass oil topically to my broken elbow twice a day. Ross would be treating his acne
once per day, while Drew would treat his cerebral palsy twice a day. 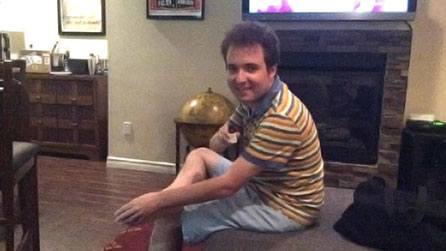 Drew tries putting oil on his feet so that it can seep into all of his pressure points.

The first time I applied my lemongrass oil, the smell filled my apartment immediately. Lemongrass is a pleasant odor, though it reminds one a bit of
cleaning products. I took a photo of my before arm bent sharply downward against nature. I would chronicle my surely miraculous recovery as I
applied the oil.

Meanwhile, Ross would use the cedarwood oil and compare his results with his typical acne breakouts. Likewise, Drew would apply his cedarwood oil twice
daily to see if he would gain improved mobility and flexibility in his right arm and right leg, which are both affected by his condition.

It didn’t take long for a headache to hit, and when it did, I tried the Deep Blue first and the oil spray every subsequent time. At first, there was a
marked difference. The overwhelming smell of peppermint, eucalyptus, and rosemary would fill my nostrils and the pain would go away. But it would return
within seconds, requiring more application of Deep Blue or oil. Sometimes the peppermint would be so strong it would burn my eyes. It seemed I had to trade
head pain for potential blindness. Perhaps the oils worked similarly to capsaicin
to suppress headache pain through the nasal receptors, though its affects were clearly short-lived.

After two weeks of applications, we tallied our results:

Ross’ acne:
Improved! Like tea tree oil, cedarwood oil appears to reduce acne outbreaks for some people. Ross was delighted to find that his acne had decreased after
he started using the topical treatment. Unfortunately, his wife found the smell so intolerable that once the experiment was over, the oil became junk in
the bottom of the bathroom drawer.

Ross’ shoulder pain:
Only temporary relief during Deep Blue application. Like Icy-Hot, it provided a topical analgesic effect that quickly wore off, leaving him where he
started.

My headaches:
No sustained improvement. While the spray provided immediate relief, the effect quickly evaporated, and I was stuck with the usual treatments of aspirin,
caffeine, and acetaminophen. 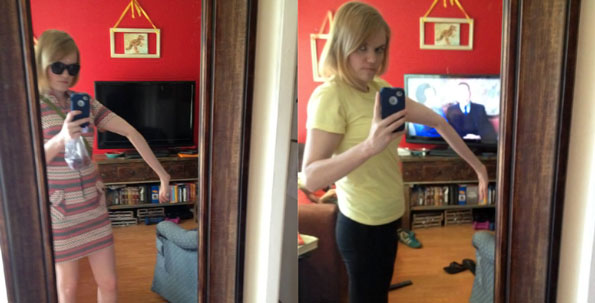 My broken arm:
No improvement. My arm bends “the wrong way” to the exact same degree that it did before the experiment began.

Drew’s cerebral palsy:
No improvement. While Drew thought the experiment was mostly funny, he pointed out that using it on a child, or giving it to someone who might really hope
for a cure, is unconscionable. In short, he summed, “Fuck these people.”

When the experiment was complete, I contacted doTERRA for their side of the story. I asked them whether they encourage people to use essential oils for
serious illnesses, whether their cofounder really told a woman to treat her son’s cerebral palsy with cedarwood oil, where they provide documentation of
the science behind their claims, whether they consider their operation a multi-level marketing model, and why Drew saw no reversal of his cerebral palsy.

As of this writing, doTERRA has not responded.

* Names with an asterisk are pseudonyms.

Update: Since the publication of this article, we have received a reply from doTERRA. It is presented here without comment:

“Thank you for your interest in dōTERRA. dōTERRA products are not intended to diagnose, treat, cure or prevent disease. There are many studies about essential oils found on a variety of resources. One good source for somebody beginning to learn about essential oils is www.doterrauniversity.com. We do not comment on people’s individual experiences. Everybody is different and may react differently to essential oils. dōTERRA is a direct selling company where those individuals choosing to build a business have may multiple levels of distributors they mentor, nurture, and support in their individual business building efforts.”