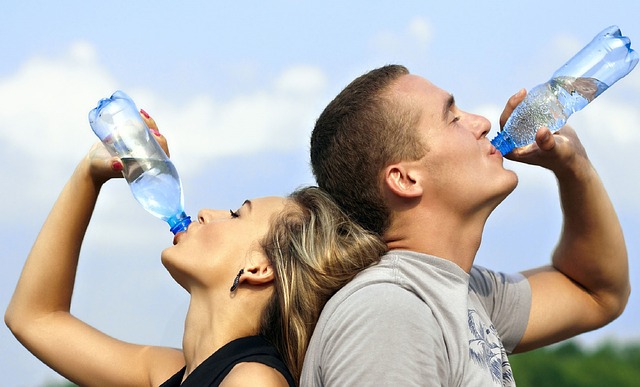 The myth has been repeatedly debunked by doctors and scientists. Even Snopes has declared it false.

I thought the myth was dying, but apparently not. I still see people who carry their water bottles everywhere. I got an email from a man who said:

“I’ve started working out again, and was trying to figure out how much water I should be drinking every day. I keep running into this calculation 2/3 body weight in pounds, drink that many ounces. So, I weigh 300lbs, 2/3rds of that is 200 ounces… that’s 25 cups a day! It seems like a ton of water to be drinking, and I can’t find anyone citing where this info comes from. All of the articles I read are just blindly relaying the same thing. Some say 1/2 the weight in lbs in ounces, but 2/3rd if you’re active.”

Here’s how the eight to ten glasses myth got started. A study in 1945 found that people need about 2.5 liters of water a day. Overall. But it went on to say, “Most of this quantity is contained in prepared foods.” The 2.5 liters was simplistically translated into eight to ten eight-ounce glasses of water, and the clarifying sentence was ignored.

I’m not sure where the rule about two-thirds body weight in ounces came from, but a doctor named Fereydoon Batmanghelidj did recommend drinking half your body weight in ounces. He just made that up. He was a crank who believed dehydration is the main cause of disease. He promoted his Water Cure, which was not based on any scientific evidence. His story is an interesting one; it’s a cautionary tale about how an intelligent, educated man deceived himself. I wrote about him for Science-Based Medicine. I’m guessing some people gullibly accepted his non–evidence-based recommendation of half your body weight and arbitrarily raised it to two-thirds to allow for extra water losses with activity.

Symptoms of Dehydration and Over-Hydration

If you become mildly dehydrated, you may experience symptoms of thirst, dry mouth, decreased urination, darker urine, headache, or muscle cramps. Thirst will usually get you to drink more, thus solving the problem.

Over-hydration can be dangerous. In the early stages, it can cause nausea and vomiting, headache, confusion, and disorientation. If not treated, it can cause muscle weakness, cramps, seizures, and coma. People have died from water intoxication, notably Jennifer Strange, a California mother of three who drank 7.5 liters of water in a radio contest to win a video game system. She came in second in the contest, went home, and promptly collapsed and died. Several radio employees were fired, the station was eventually shut down, and a jury awarded her survivors over $16 million in damages.

A study of runners in the 2002 Boston marathon found that almost 2,000 participants had some degree of hyponatremia (low blood sodium levels due to over-hydration) and ninety had critically low levels. These runners gained weight (water weight) during the race. Runners believed mild dehydration would impair their performance, but studies have shown that dehydration of up to 3 percent does not affect performance.

So How Much Water Do You Need to Drink?

Individual water requirements vary according to ambient temperature, physical activity, illness, and many other factors. It does not make sense for everyone to drink the same arbitrary quantities of water, whether eight to ten glasses or 200 ounces a day. There are two reliable guides to how much to drink:

That’s all you need to know. Simple.