Yes, it’s grief vampire Tyler Henry time again. Cosmopolitan Magazine released a 2:45 minute video of a reading given to one of their staff editors. And guess what? “The results were pretty crazy.” Well, according to Cosmopolitan that is. “Crazy” can mean different things to different people; I’m sure we are not going to agree, but let’s look at this short reading and see what we learn.

First, I should introduce you to Tyler Henry. He is a young psychic medium who was given a reality TV show on the E! Network called Hollywood Medium. He made his debut in January 2016 and has just been renewed for his third season. I have been writing about Henry since the beginning under the title “Operation Tater Tot.” Henry claims that he is unaware of who he will be reading and knows little of the celebrity world because he was raised in a small town outside of Fresno, California. Most skeptics believe that Henry is hot-reading his way through these readings. A hot-read means that he has the knowledge beforehand.

I have written extensively that from everything I have seen he is using cold-reading tactics. This means he is reacting to the person’s appearance and body language. Also, he is throwing out generalities that will apply to most people. All this is followed by video editors who will keep all the best parts of the reading and throw out the misses. The magic really happens in the editing room.

So, here we go: we are given a 2:45 minute video that begins with Tyler meeting a senior video producer for Cosmopolitan named Jason Ikeler. Ikeler is in his late twenties. He is a white male with glasses and a short trendy haircut wearing a light jacket over a plain white t-shirt. Ikeler has a nose piercing, no wedding ring, but he does have a black band on his right hand and tattoos on some of his fingers. He smiles often, showing off a dimple on his right cheek, and he nods attentively and seems careful to follow instructions. A very agreeable sort of fellow, trendy, and open to a psychic reading. All of these observations are important to a cold-reader. They guide the psychic.

First up, Ikeler hands Henry a black sweater as an object Henry will use to focus on. This tells us that Ikeler probably knew he would be participating in this reading. I doubt he carries this sweater (which we later learn is his dead grandfather’s) around with him, so he had to think about this, maybe even ask his mother for the sweater. How much of this could have been discussed at the workplace beforehand is not known, but it’s possible it was. It’s something that Henry’s handlers might have been able to ascertain ahead of time.

The first thing I want to point out is that this is a very short reading, or so it appears to be. Henry takes the sweater from Ikeler and then it looks like right away he “gets” the grandfather. What we don’t see is that there could be a cut between getting the sweater and Henry saying, “Immediately, I have to go to your Mom’s side of the family, not your Dad’s side of the family.” We don’t know if they have been talking for a while and Henry has already learned many things about Ikeler. The word immediately could have been used out of the context of what it seems to mean in this video.

A man comes through and something about generations and “Mom, Mom, Mom… has your maternal grandfather passed?” Ikeler confirms that he has. Henry talks about how this grandfather liked to smile and laugh and Ikeler says that he liked to laugh and was very jolly. But how many of our dead relatives did not laugh and smile? Or at least we have good memories of them doing so at one point. If Ikeler’s grandfather was someone who never smiled or laughed, then Henry could say that now he is on the “other side” he has found a sense of humor or Henry could say, “before he became a grandfather he was a very funny man.” There is always an out for a cold-reader. 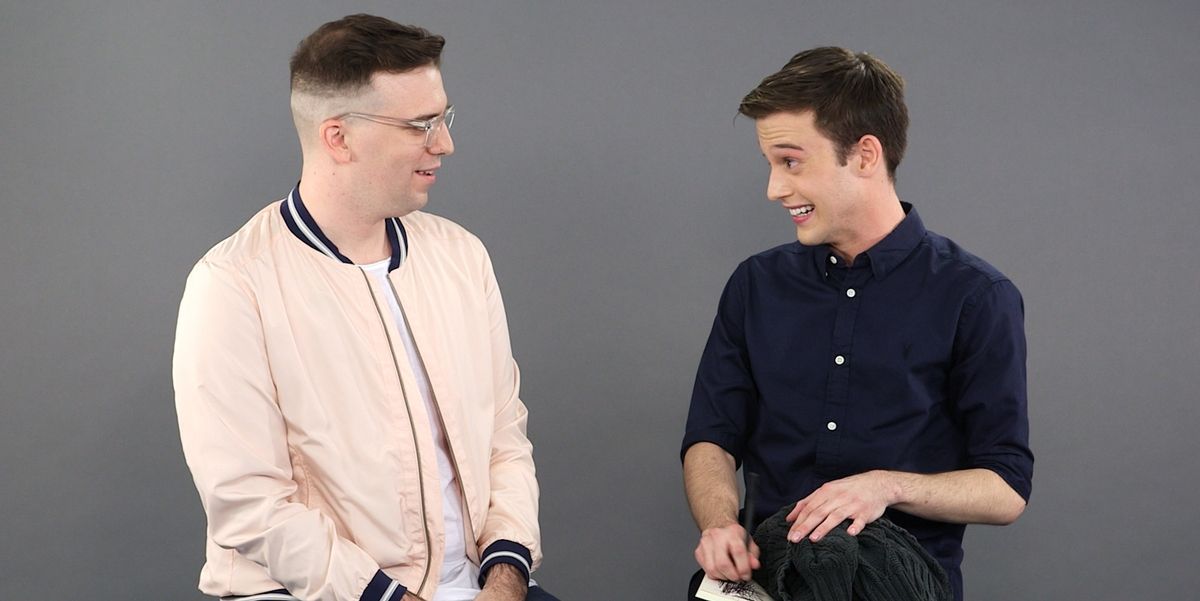 Now here is the big hit. Henry asks, “Who is Ed?” Ikeler is stunned and says, “That’s his name.” Henry is also stunned, “You’re kidding!” he answers. I would be stunned too if a psychic did this to me and I felt like there was no way they could have known my maternal grandfather’s name. But wait, Henry didn’t say that Ikeler’s maternal grandfather was named Ed. He said, “Who is Ed?” Very different, isn’t it? Still it does appear odd, that is until you think how common the name Ed is and consider that Henry is not saying whether Ed is alive or dead. It is just a short name that could have applied to Edward, Edna, Eddie, or possibly a last name. Henry might have had knowledge of this name beforehand, or he might have been throwing out a common name in the hopes it would stick to someone, and he got lucky. Or maybe Ikeler’s grandfather is trying to contact his grandson. If so, then I’m sure he has some important wisdom to give to him…

Well, not so much. Ed wants to talk about the last six months of his life: how he was having problems with mobility, not walking well. Again, not much of a major hit as lots of people have mobility problems months before they die. We do learn from Ikeler that Ed is missing a leg.

Now another hit: “Do you know a Ryan that would be in the family?” Ikeler answers, “That would be my brother.” Again, Henry did not say “Ed is talking about your brother, Ryan.” Henry said “Do you know a Ryan… ?” Ryan is a very common name for men born in the eighties and nineties, and it was also a very common middle name, often teamed up with Christopher. Henry could be playing the odds and got lucky again, or possibly Ed is really chatting with Henry or there was knowledge beforehand.

Ikeler had already told Henry that his grandfather had lost a leg, and now Henry is talking about a story about a pirate and Captain Hook. Ikeler seems to remember his brother teasing their grandfather about being a pirate. That fits; I can easily see a fun grandfather joking with his grandsons about being a pirate. And remember, Ikeler only thinks he remembers his brother telling this story. Then Ed goes on to tell his grandson that he wasn’t conscious when he passed and that everything is okay. Henry asked who the sweater belonged to, and Ikeler said, “my grandfather.” It’s not clear if he is referring to Ed and not to his other grandfather.

Then that was all.

So, we are left with several questions. Could this have been a much longer sitting with lots of misses and lots of chances for Henry to grill Ikeler for information? Possibly. Could Henry have learned who Ikeler wanted to hear from and who the sweater belonged to? We don’t really know. I’m sure the Hollywood Medium people would say that there was no connection between the two of them. Possibly not, but there are a lot of people wandering around working for both sides: makeup, hair, setting, lighting and so much more. All it would have taken would be for one assistant to have asked another assistant, “So who is this guy who is getting the reading today, and who does he want to hear from?” Both Cosmopolitan and Hollywood Medium are on the same page about wanting a really great reading with strong hits. There is a lot of pressure to make a good show. This is entertainment after all, not a show to catch a psychic faking a reading. If it had been a flop and Henry had not connected to anyone, then it would not have aired. We only see the successes. No testing is going on here. No controls are set up. Off-camera they could be sitting together discussing Ikeler’s family history; we just don’t know.

Or maybe it’s possible that Tyler Henry really is in touch with dead people. Why they would want to pass on messages like these I’m really not sure. Why not something more important such as advice for his grandsons and other family members? What’s it like on the other side? And why isn’t Henry clearing up cold-case files for the police? Don’t those grieving family members deserve a little comfort in finding lost loved ones? The only messages Henry can give is a mention of a pirate from a one-legged jolly grandfather?

I know I’m going to appear cynical. It’s obvious of these three possibilities that I’m leaning heavily toward this being a hot-read. For whatever reason, maybe as a joke on Ikeler or in order to get a great reading or because someone in the psychic camp overheard something in the Cosmopolitan camp, I’m betting that there is no communication with the dead. After this reading, I Googled Jason Ikeler and found that he is quite prolific with his writing and social media. Twitter, Instagram, IMDb, Tumblr, and more. His personal website shows his birthdate and where he was born, and while Henry didn’t mention these things on a reading, it does show that Ikeler isn’t private with his personal information. Possibly he or someone around him could have talked about his grandfather. One thing I noticed is that Ikeler is a “reality television producer currently living in Los Angeles.” That sounds familiar. Isn’t Hollywood Medium a reality television show in LA? I wonder if someone who knows Ikeler arranged this reading. Looking through Ikeler’s Instagram page, it is clear that he is really into celebrities; he both interviews and reports on them. I wonder: Have any appeared on Hollywood Medium?

And brother Ryan Ikeler, who is on Facebook, is also a very public person. With a bit of scrolling I find a post in 2016 with photos of a smiling, one-legged grandfather and a mention of how much Ryan misses him. These same photos we later see on the video.

So where do we go with this? There were some really powerful hits, with the names of Ed and Ryan, that sound like there might be some communication going on. But we need to use common sense; what is more likely? That this sitting was arranged between reality TV people and leakage happened, either intended or accidental? Could it be good guessing, with Ed and Ryan thrown out as common names and they got hits as family members and the rest of the sitting was carefully edited out? Or Is the Hollywood Medium really communicating with the dead? Personally, I think that the first option is most likely. Both Cosmopolitan and the E! Network have vested interests in producing this video with a strong message of “WOW! Watch this AMAZING video!” yet they need to make it look really natural. Cynical as it might sound, follow the money and you won’t be far off with your conclusion.