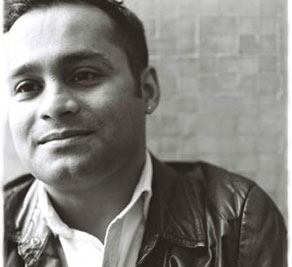 Alom Shaha
was born in Bangladesh but grew up in London. A teacher, science writer, and filmmaker, he has spent most of his professional life sharing his passion for
science and education with the public. He is the author of The Young Atheist’s Handbook, a copy of
which the British Humanists Association sent this year to every secondary school in England and Wales.

Alom was a presenter at the recent World Humanist Congress as a part of a panel discussion
on freedom of thought and perceptions of Islam. Recently he’s been working with the Royal Institution on “ ExpeRimental”—a series of short films with fun, easy, and cheap science experiments you can do at home with your
children.

Alom Shaha: My first experience as a science teacher began when I went to work a summer camp in America after I graduated. I’d actually had a really miserable time
on my physics degree and wasn’t particularly fond of science or science education. But the manager of the camp, the guy in charge, was a giant, big guy
called Bob Bear who was generally bear‑like as well by name. He just said, “You’ve got a science degree. You’ll be teaching science.”

I ended up teaching a regular science class to five- and six‑year‑olds, and I loved it. It was really weird. It was just like when you try on a new item of
clothing in a shop and it fits perfectly; it just felt like a really natural thing to do.

That was the first time that I thought that I could be a science teacher, so Bob Bear is responsible—a big, scary man who forced me to teach science!

Kylie Sturgess: From science teaching then to science communication via film is also quite a challenging step. Was it just the same in terms of putting on a new suit and
finding it fitted?

Alom: My journey into filmmaking and science communication happened as a result of being settled in as a teacher, and then deciding that I wanted to improve as
a teacher. I decided to do a master’s in science communication degree and felt that learning about that would make me better in the classroom.

As these things happen, part of that course was doing a work placement at the BBC, and they offered me a job, and I thought, “Well, this looks interesting,” and from there I went to work in TV.

I left teaching, actually, and went to work in TV for a while, and whilst working in TV, I had this wonderful stroke of luck. I was offered a fellowship by
an organization called NESTA, the National Endowment of Science, Technology, and the Arts, and I got to go to film school, and I really fell in love with
filmmaking. I’ve been incredibly lucky and privileged, but there wasn’t a deliberate plan.

Having worked in TV for a long time, I then found I missed teaching. I missed being in the classroom, so I left television, and went back to teaching
part‑time, but somehow managed to work things out so that I carried on doing science communication mostly through video.

Actually, what helped me forge the rather peculiar career I have was the advent of YouTube and the changes in technology with the advent of digital
filmmaking tools that really brought the cost of filmmaking down. I think that’s what’s allowed me to do the kind of work that I do.

Kylie: With all these activities, now you’ve got a new adventure that you’re involved with, called ExpeRimental. What led to the Royal Institution’s ExpeRimental? Is there an area of need when it comes to science resources online?

Alom: ExpeRimental is very much an evolution of what the Royal Institution has been doing for the past 200 years.

Kylie: So it’s been a long journey to get to this stage!

Alom: Yes, I’m really proud to be working for the Royal Institution because I think it’s very much the birthplace of science communication. Way back around two
hundred years ago, they were first trying to communicate science to the public. Very famously, they started the Christmas Lectures. It’s a place where
science was done, but also there was a concerted effort to communicate science to the public, to engage the public with science.

ExpeRimental is really the twenty-first-century version of that; it’s online because that’s what allows us to reach big audiences beyond our offices in
Central London.

Kylie: What makes ExpeRimental different, say, to turning on the television and watching an episode of a science TV show?

Alom: I think ExpeRimental is not just different from TV programs, I think it’s different from other web content of this sort. Of course, it’s going to sound
weird, but for me, this project wasn’t about getting people to watch the videos. That’s not enough. It’s about getting people to watch the videos and then
say, “I’m going to go and do that,” so it’s a call to action.

These films are not about entertaining you. They’re not about telling you facts or what is called the “empty bucket” model of science communication. We’re
not trying to fill people with information or facts. What we’re trying to do is show people that you can do stuff at home that is scientific in its
approach, and that is fun, and interesting, and that you should be doing it, and not just observing it, and not just passively taking it in.

Kylie: What’s some of the fun stuff I could do?

Alom: We’ve got some great stuff coming up in the next few weeks… The first three videos, one of my favorites is the rubber band cannons, which involve say
taking a crisps/potato chips tin… an empty soda bottle, and some rubber bands, and a pencil. That’s all you need. Then you can make a device that fires
all sorts of projectiles in quite an impressive way!

When we made that film, the children involved absolutely loved it and just carried on with the activity way beyond when we finished filming. The other
thing I learned was one of the films about making giant soap bubbles, and I hadn’t realized how easy it is to make phenomenally huge bubbles with just a
little string and a couple of sticks.

One of the things we’re trying to do with these films is show people how to do this stuff really cheaply, with stuff that you ought to just have lying
around at home or that cost a few pennies. I’m really proud about that, and I’m hoping that’s what will make the films accessible and non‑exclusive. There
won’t be financial barriers to trying out these things.

Kylie: It’s got a pretty open target audience then?

Alom: My target audience is the world, Kylie. You know me! I feel passionately about the fact that science shouldn’t be restricted to any particular class of
person or any particular gender. What I really hope is that these films do encourage people from all sorts of backgrounds to try our activities.

Kylie: Where can people go to let you know and find out more?

Alom: To let us know that they’re trying this stuff, if they just go to facebook.com/ri.experimental, all
the resources are on the Facebook page, and they can become members there, and upload photos and videos of anything they’ve tried out.

We’ll be publishing one a week every Thursday for the next seven weeks and hopefully beyond.

You can find out more about Alom Shaha at his website http://alomshaha.com.