Pizzagate, the conspiracy theory—based on John Podesta’s leaked emails—that claims a popular Washington, D.C. pizzeria hosts a pedophilia ring (not unlike the alleged pedo rings of the 1980s Satanic Panic) has resurfaced. This time it is put forward by investigative reporter Ben Swann, who works at a CBS news affiliate in Atlanta. In February 2011, when I lived in Atlanta, the CBS station aired a story by Jeff Chirico about chemtrails that prompted literally thousands of emails and photos from viewers around the world. In the wake of that unexpectedly vigorous reaction, the editors explored more stories with a conspiratorial bent. I know this because when I read about the reaction, I asked if I could have access to the emails. I met the reporter, and we had a discussion about conspiracy theories and I ended up in a short piece about the Georgia Guidestones, along with researcher Raymond Wiley, which aired in May of 2011. So, when I heard that a new video was circulating from CBS46 about Pizzagate, I was not necessarily surprised, but the tone of this one was much different.

This week’s Reality Check segment by Swann is called “Is Pizzagate Fake News?,” and he starts off describing the media reportage of the story as dismissive and that the story has widely been labeled as “fake news.” He asks as an aside, “What does that [the term fake news] even mean?” Well, he fully answers that by the end of the segment.

The segment is presented almost as a continuous shot of Benn Swann as he speaks in front of a slide show. In some ways, it reminds me of Glenn Beck’s conspiracy theorizing in front of a chalk board. What we have instead of a news report with interviews and reporting from the field, then, is a monologue listing decontextualized evidence and “connections,” tenuous as they may be. He starts with a little CYA, giving the barest background on the story and including a bullet point about how none of the emails mention child sex trafficking or pedophilia: 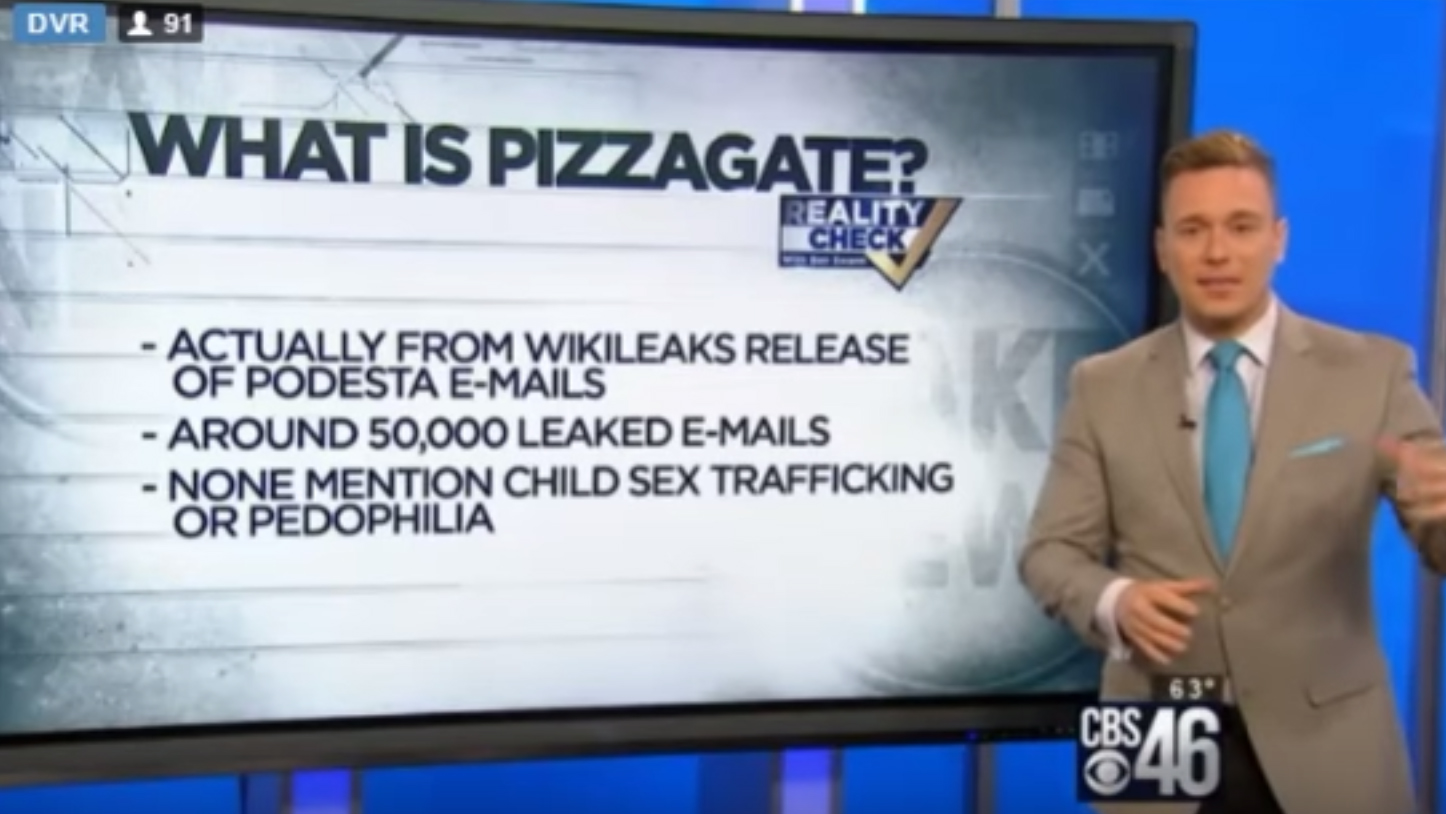 Most reporters might conclude from that the emails in question are not about sex trafficking or pedophilia, but not Swann. “There are dozens of what seem to be strangely-worded emails dealing with pizza and handkerchiefs,” he says. “Self-described online investigators say that those words in the emails about pizza and the talk of handkerchiefs is code language used by pedophiles.”

There is a lot to unpack here, so bear with me.

If you search the Wikileak Podesta archive for “handkerchief,” you’ll see it is more accurate to say that there are nine mentions in five email threads of the term “handkerchief” in the 50,000 Podesta emails. In the four-email thread “Did you leave a handkerchief,” we see that Podesta appears to have left a handkerchief behind during a tour of some real estate with a member of the staff of the Sandler Foundation. The note from the agent mentions that the object was left on a kitchen island of the “Field house.” The Sandler Foundation rep tells Podesta:

The realtor found a handkerchief (I think it has a map that seems pizza-related. Is it yours [sic]? They can send it if you want. I know you’re busy, so feel free not to respond if it’s not yours or you don’t want it.

Podesta says it’s his but not important. This is the only time that the terms “handkerchief” and “pizza” come up together. Podesta, who is supposed to be the link, never uses the terms in the email, rather they come from the Sandler Foundation rep. And while the description is vague but not suspicious in any way, Podesta certainly doesn’t freak out that his handkerchief map to pedophila pizzarias has been discovered.

We find many more mentions of pizza when we search the archive: 149, to be exact. And a quick examination of these suggest that these are in reference to dinner, feeding people doing political canvassing, and other types of events that political humans do. If you come across something in there that is more sinister than anything I saw in my brief skimming of the content, please let me know. But remember, according to Swann himself, he’s been going over the evidence for a month. Certainly he could at least share one coded message to the audience to show that he was talking utter bunk without offending his viewers? Apparently not. Instead, he mystery mongers and we’re left only with: “dozens of what seem to be strangely-worded emails dealing with pizza and handkerchiefs.” Further, to say something is strangely-worded, of course, is to make a subjective judgment. He invokes strangeness without offering any evidence of the strangeness. Maybe it would be more convincing if it turns out that handkerchiefs and pizza really are a sort of secret coded language that allows of pedophiles to pedophile openly in plain sight?

Well, this is a surprisingly tough thing to fact-check. However, according to a summary of the Pizzagate theory, the relevant term is not “pizza” but “Cheese Pizza,” which supposed to be a reference to “Child Pornography.” Their citation is an entry in the Urban Dictionary. The phrase “cheese pizza” does not appear in the Podesta emails at all. A search of Google Books does not turn up meaningful results for the search “cheese pizza,” “handkerchief,” and “pedophilia.” But let’s say that even if these really are code words, and one is based on the initial letters of the words “child” and “pornography,” Swann never explains why the use of a code word would lead us to think that an actual pizzeria was involved? There is no reason to even follow up and consider Comet Ping Pong Pizzeria as the scene of a child sex crime based on secret pedo alliteration.

Just for giggles, I did another search, this time of my own email for mentions of pizza. In Podesta’s email there are 149 uses of the word in some 50,000 emails. I don’t have time to go through them all. When I searched my own Gmail account, after removing references to “fake” and “conspiracy”—thus hiding Google alert results related to pizzagate—in my 109,058 emails there are 154 mentions. So pizza is mentioned twice as often by Podesta and his correspondents as it is by me and my correspondents. I’m pretty sure he attends at least twice as many pizza dinner fundraisers for Hillary as I do. Benn Swann does not even do this level of analysis, which is remarkable for someone who has been “investigating” for a month.

Swann next says that mainstream media says Comet Ping Pong Pizzeria has no relation to anyone mentioned in the emails, suggesting that the media is ignoring the fact that the owner of the restaurant is a friend of Podesta. Swann apparently doesn’t read the New York Times, which stated exactly what Swann thinks the media is hiding on November 22:

Mr. Alefantis [Comet Ping Pong Pizzeria’s owner] mingles with other Washington chefs and his establishment helped him to be named No. 49 in GQ magazine’s 50 most powerful people in Washington in 2012. His customers include some high-powered locals, such as Tony Podesta, the brother of John Podesta, whom Mr. Alefantis knows casually. Mr. Alefantis and Mr. Brock, who is the founder of Media Matters for America, a website that tracks press coverage critical of the Clintons and works to debunk misinformation in the conservative press, broke up five years ago.

The misinformation campaign began when John Podesta’s email account was hacked and his emails were published by WikiLeaks during the presidential campaign. Days before the election, users on the online message board 4Chan noticed that one of Mr. Podesta’s leaked emails contained communications with Mr. Alefantis discussing a fundraiser for Mrs. Clinton.

What Swann says reiterates that there is no direct evidence linking Comet Ping Pong Pizzeria to a pedo sex ring, but then he makes assertions about evidence that he can’t show us. All of this evidence is discussed at more length in a recent episode of the Virtual Skeptics (at time 16:20).

So what’s the upshot here? Well, according to Swann, as he closes the story, “There has not been one single public investigation of any of this, not from local police, not from the FBI, no-one. And that has to be the big question, not for Podesta or for pizza parlor owners but for law enforcement. Based on may be or may not be here, the big question is why hasn’t any investigation taken place?” Then, despite having the title of “Investigative Reporter,” he immediately doesn’t ask the police authorities why they aren’t investigating. So I did. I sent an email to the Metropolitan Police Department and an officer got back to me in minutes:

“The Metropolitan Police Department takes matters such as this very seriously. After investigating those claims, we have determined those allegations to be false.”

This seems to be Swann’s M.O. when talking about conspiracy theories. In 2013, Swann did a video with Luke Rudkowski (of We Are Change) about the ReThink 9/11 movement. In the video, he didn’t talk to anyone who disagreed with the 9/11 conspiracy and he repeated the results of a poll that suggested that Americans were increasingly skeptical of the official story of 9/11. By coincidence, I contacted the pollsters about this survey and its methodology when it came out (Swann seems to not have gotten around to it) and found that respondents were prompted with a deceptively edited video of the collapse of Building 7. All of the questions raised by the Rudkowski/Swann video and the Pizzagate piece have answers. It is the job of responsible reporters to look for the answers, not just ask questions. Otherwise, you are left with fake news.