At a conference this past weekend, I met a PhD student with whom I share some academic interests. His work seemed worthwhile, but one thing he said struck a nerve. When I first asked him the topic of his dissertation, he said “fake news.”

As I quickly learned, his topic wasn’t fake news. It was native advertising—articles that read like news but are paid for like advertisements and often end up confusing readers.

It’s not the first time I’ve noticed this phenomenon. Ever since “fake news” became an inescapable phrase in late 2016, journalism professionals familiar with misinformation have made a point of defining the term carefully. But some academics and journalists seem confused. When I attended a session on “fake news” at an earlier conference, here are some of the information types that speakers lumped in:

All of these represent real ethical lapses by journalism professionals (though the last one is very rare). They are problems that our industry needs to grow up and address—but they do not represent “fake news.”

In fact, fake news isn’t created by journalists at all. It’s content created without an iota of professionalism or integrity and with no benefit for society. That’s why the distinction is so crucial.

I’ll readily admit there is no one, official definition for “fake news,” though Dictionary.com’s offering is pretty good: “False news stories, often of a sensational nature, created to be widely shared online for the purpose of generating ad revenue via web traffic or discrediting a public figure, political movement, company, etc.”

Snopes cofounder David Mikkelson, who has been helping Internet users to identify misinformation since 1994, has a slightly different definition: “Completely fabricated information that has little or no intersection with real-world events.” 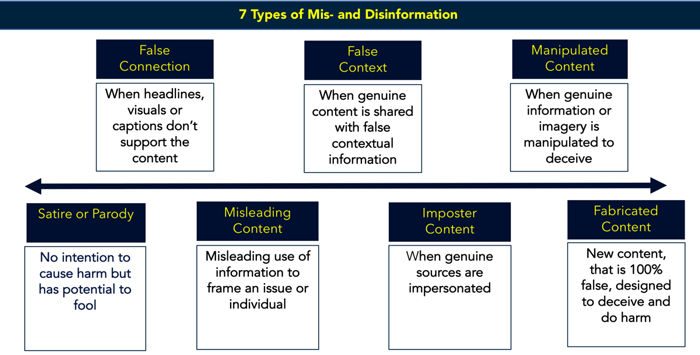 These definitions might not agree on every detail, but they do agree on one point: There’s something fundamentally different about deliberately manufactured falsehoods, setting them apart from journalistic errors.

According to Wardle, there’s a pretty strong correlation between the types of bad information we see out in the world, and the motivations of the content’s creators (as seen in the chart below). Fabricated content is typically created for profit, to propagandize or spread political influence, to provoke or to parody. Poor journalism, on the other hand, doesn’t create wholly fabricated content. Instead, its end results include headlines or visuals that tell a different story than the article text and facts placed in false or misleading contexts. 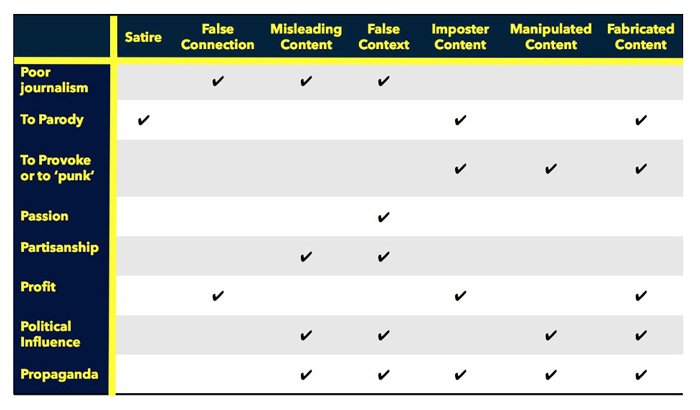 Any of us can test whether Wardle is right about this distinction. Just see how many New York Times, CNN, or Wall Street Journal articles you can find that are made up: Not containing inaccuracies, not fundamentally unsound because the journalist didn’t understand the subject matter or placed too much trust in her sources, but made up out of whole cloth. “Trump strips NFL of non-profit status”? “Hillary caught on tape laughing at hurricane victims”? These didn’t come from the mainstream media.

What Journalism Gets Right

This distinction is fundamental for the future of our democracy. The label “fake news,” as it has come to be used, is a wooden mallet. It’s blunt. It can only smash, not carve, pluck, or hold up for inspection. The more we use it, the more dulled we all seem to its effects.

The smasher-in-chief is, of course, our president. Trump has effectively brought the news literacy crisis to a head by trampling on and obliterating the already blurred lines between types of content. Only by choosing our terms carefully can we start to redraw those boundaries.

To start, let’s acknowledge that most professional journalists aren’t mendacious, manipulative partisans, creating hoaxes and spreading lies to get their favored candidates into office. Most abide by the principles and practices they learned in school and on the beat, such as striving to report all details accurately.

By and large, journalists choose their career because they are passionate about providing the public with up-to-date information to help them make decisions everywhere from the voting booth to the doctor’s office. It’s certainly not for the money or job security, because there’s little of either.

And the work is crucial. In all the hand-wringing about fake news, one news literacy lesson getting severely underplayed in the public sphere is why we value journalism in the first place. It’s because of people like Ida B. Wells, who documented lynching in the American South; Nellie Bly, who investigated mistreatment of prisoners, the mentally ill, and sweatshop workers; and Woodward and Bernstein, who uncovered corruption at the highest levels of the U.S. government. 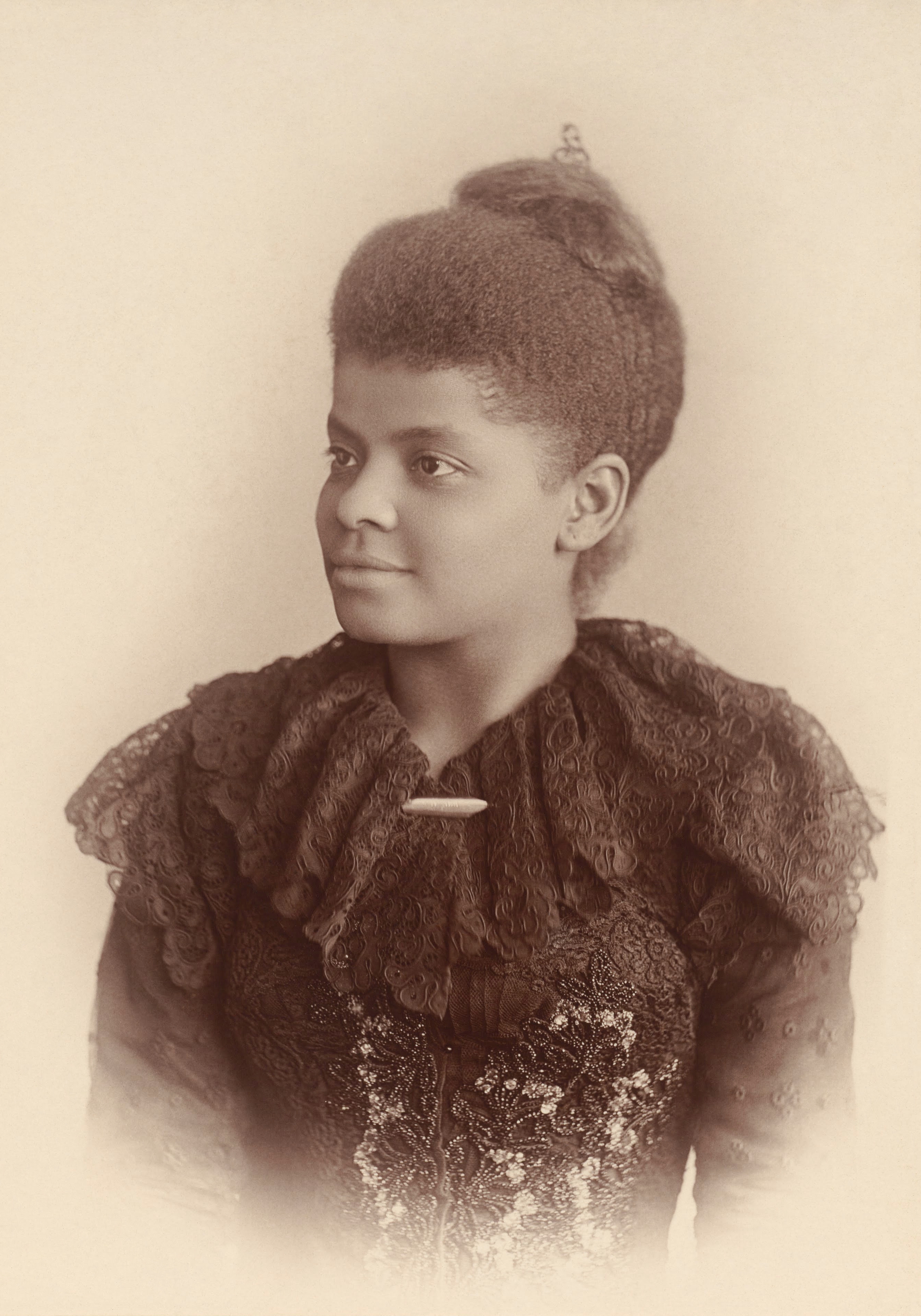 Today’s journalists carry on this watchdog role, even if their names aren’t as well known. This year’s Pulitzer Prizes recognized Sarah Ryley, who found that hundreds of people in New York City were unfairly evicted from their homes due to overzealous police actions, and more than 300 reporters who collaborated to report on the Panama Papers. That roster included Daphne Caruana Galizia, a Maltese journalist who died in a car bomb attack on October 16, 2017. While the motives behind her murder are unconfirmed, over 1,200 journalists have been killed because of their work since 1992. Most knew the risks. They did the job anyway, because the job is that important.

If we lose sight of this, or fail to pass it on to our children, we’ll seriously imperil our future.

What Journalism Gets Wrong

At the same time, journalists’ and news executives’ response to the misinformation crisis has too often been to deny all culpability. There are many reasons people are frustrated with or disgusted by the news media, and much of this is beyond reporters’ control. But then there are errors and arrogance. The news media has too often been unaccountable to its readers and failed to take responsibility for its mistakes. Some of the deeply ingrained problems are:

Poor verification: In the rush to earn clicks and beat the competition, news outlets too frequently cut corners or accept the word of secondary sources.

Emphasis on conflict and negative news: Too often journalists wave this complaint away with the excuse, “No one wants to read about the 5,000 planes that didn’t crash today”—thus conflating “positive” with “ordinary.” In reality, journalism that covers potential solutions holds great appeal for readers.

Lack of context: When negative events are covered as isolated, random, instances rather than as symptomatic of larger problems, it can be even harder to imagine solutions. A similar outcome occurs with protest coverage, when far more words are devoted to the spectacle, arrests, and violent outliers than to the grievances motivating participants.

Dull coverage / failure to connect: Similarly, too many hard news stories are presented in an “eat your vegetables” manner. News reporters assume their job is just to report the facts rather than to explain the situation and how the facts affect readers.

Perpetuating stereotypes: Instinctive, unconscious choices about what stories to cover, or how to frame them, often perpetuate stereotypes about racial minorities and other disadvantaged groups.

Poor health reporting: Reporters often breathlessly report on the latest studies without presenting information on the quality of the research or placing the study in the context of the existing literature.

Invasion of privacy: Grieving individuals sometimes welcome a chance to talk about their loved ones. But reporters who pressure or hound them are acting unethically.

Misleading and annoying ads: Digital journalism is extremely difficult to sustain, and news outlets are desperate for advertising dollars. But one of the major solutions to emerge over the past few years – those “around the web” ads that pair outrageous pictures with hyperventilating headlines – actually undermines the mission of journalism. If we’re in this business to inform, how can we excuse ads that so often deceive? It’s not right and it’s further diminishing trust.

Many smart, concerned people recognize these ongoing problems. You’ll find many of these people in university journalism and communications departments, analyzing coverage, developing theories and testing hypotheses. Unfortunately, far too few concerned individuals actually work in the news media, where decisions are often made on the basis of “this is how it’s always been done”—even while publishers fret about the twin existential crises of falling revenue and declining trust. 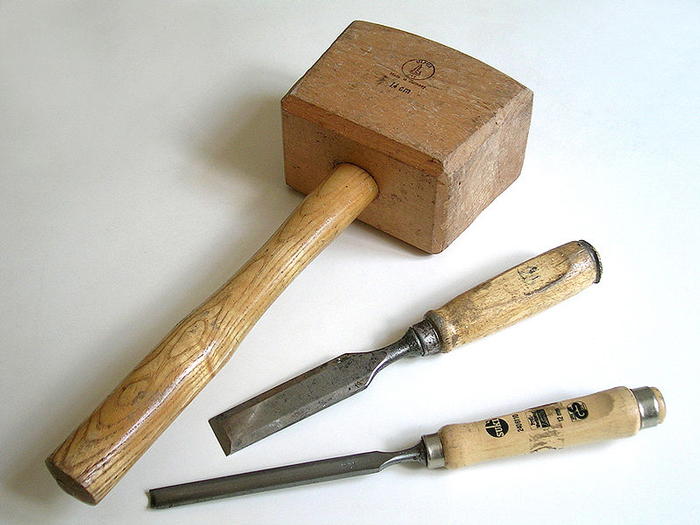 Writing about journalism’s failings is a double-edged sword. I hesitated to write the section above, knowing that those seeking to undermine the mainstream media seize upon every misstep it makes to further lower trust levels, making people even more susceptible to misinformation. I also don’t want to focus unduly on journalism’s missteps when the onslaught of false and grossly distorted information is a much larger threat to public knowledge.

Yet journalists simply must issue a mea culpa. It’s no use shrugging your shoulders, saying, “I don’t know why these people refuse to trust or believe us, no matter how hard we work!” Yes, individual journalists work hard—but some of the profession’s practices are ill-suited to a modern news ecosystem or were broken to begin with. Saying, “I know we need to improve” is a necessary first step to earning back reader trust. (The next step, of course, is to make actual improvements.)

What’s more, if journalists send the message, “The problem isn’t us, it’s all the stuff written by other people,” then they’re simply not representing the problem accurately, and people know it. Seeing that distortion, is the public’s response going to be forgiveness? Or is it going to be, “Yet another lie from the lying media. They’re just as bad as all the hoaxers”?

Acknowledging the full range of misinformation, from fakery to deadline-induced sloppiness and everything in between, allows us to teach news literacy lessons that empower people’s news forensics skills. Instead of the “fake news” mallet, they’ll wield chisels, magnifying glasses, and brushes to sweep away dirt.

We want people to recognize that an article can get a detail wrong and still get the fundamental facts right. That doesn’t mean that misspelling names is OK. That doesn’t mean we can’t advocate for news media to minimize mistakes. It just means acknowledging that all content resides on a spectrum between total truth and total falsehood, and we will value the sources that are most reliable—because the alternative is believing nothing at all.

•••One paragraph was left out of this column when it was first published. This has now been corrected.