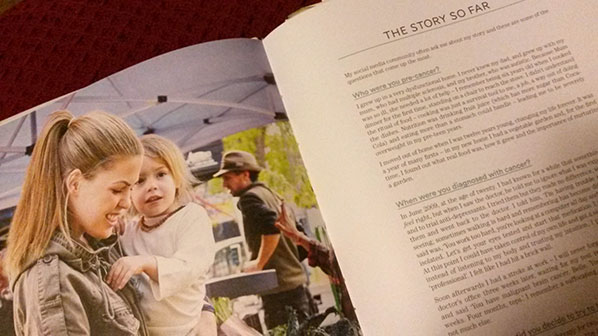 For over a month now, I have read over Belle Gibson’s The Whole Pantry (Over 80 New Recipes With a Back-To-Basics Approach to Wellness, Lifestyle And Nutrition)–a book that reportedly has been removed from the shelves,
but is readily available at my local bookstore and the local library–and find myself repeatedly going back to the disclaimer on the back of the title page:

The information of this book is of a general nature. It is not intended to constitute professional medical advice and is not a substitute for
consulting with your doctor or other healthcare provider. The publisher… and author… are not responsible for any adverse effects or consequences
arising from the use of any suggestions, preparations or procedures included in this book. All matters relating to your health, including diet,
medication and appropriate physical activity, should be discussed with your doctor.

So is Belle Gibson to blame for what happened next? She began as a cancer survivor, a seeker of wellness, a user of Instagram who tapped into a “community”
that has supported her creating “the world’s first health and wellness lifestyle app,” which was to be a featured application on the Apple Watch App Store. 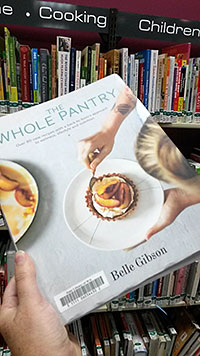 Her name is now associated with lying about cancer conditions, profiting from her reputation as a “wellness blogger”–and has gained hundreds of angry and
upset comments online after her appearance on Australia’s 60 Minutes current affairs program (especially after rumors that she was paid for the interview).

If you skip the thirty or so pages at the front of the book which detail Gibson’s “Philosophy” behind the recipes–“[bringing] together the integral needs
of a balanced life… your new space for inspiration, health, wellness and lifestyle support”–I honestly don’t think this is much of a cookbook.

I still can’t figure out on what basis Gibson ranked her “Australian” version of the USA Environmental Working Group’s “Dirty Dozen” and “Clean Fifteen”
organic vegetable lists. She claims on page 68 that “as a general rule, it’s good to avoid the hormones and fluoride in tap water” and that soy
milk is “typically genetically modified.” The extraction of probiotics from a handful of capsules in order to make Cultured Cashew “Cheese” on
page 180 is weirdly at odds with the organic trend of the meals.

No one is willing to taste the Chocolate, Raspberry, Beetroot and Zucchini Breakfast Muffins (page 84) that took me three shopping centers to find the
gluten-free baking powder for, until I lie and say they’re just plain chocolate chip.

I try making the Asparagus and Zucchini “risotto” from page 94 and everyone asks why I’m serving Hummus dip for the main meal. I would probably try the
Poached Eggs with Green Smash and Hazelnut Dukkah for breakfast again, if it wasn’t for the fact it took me over half an hour to make it… and let’s face
it, plain coffee and toast has much less washing up involved.

After seeing spirulina (blue-green algae) listed as the key ingredient for the scrub and soak mixture, I check the rest of the recipes to see if it’s
included elsewhere (it isn’t). However, it is praised on page 12 as a “superfood” that encourages liver function, anti-inflammatory, and anti-bacterial (even though there’s no apparent evidence for this).


Now I am settling into a diet without a label, because gluten-, grain-, mostly dairy- and egg-free, anti-inflammatory, with Ayurvedic principles is
just too much to stick into one category.

While the recipes weren’t really to my liking, it’s the first two-dozen or more pages of the cookbook are the most distasteful aspect:


I said right from the start that I was a brain cancer patient, on a quest to heal myself naturally. I was totally overwhelmed by the immediate response
to my first posts… what I was writing about was really resonating with my community, and it still amazes me how we’ve all come together.

What do you think it was about your Instagram posts that attracted so many followers?


Authenticity and integrity. It really is that simple. Too many people over-edit themselves. There’s not enough honesty out there. It’s human to feel
sick, to ask questions, to search for answers… I used to feel quite self-conscious and sheltered, but now I embrace rawness and honesty. Never refine
yourself in a way which takes away your heart, message and truest self.

Belle Gibson writes that while she has a simple life in mind for the future, she also has more products in the pipeline and “collaboration on
school-building and other international projects.” It is unlikely this will ever happen now. 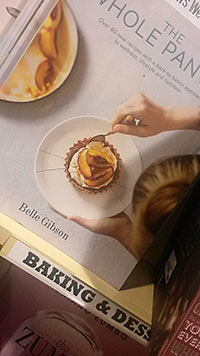 To unpack the ramifications further, I interviewed Dr. Ranjana Srivastava, a medical oncologist and author based in Melbourne and the award-winning author
of So It’s Cancer, Now What?

Kylie Sturgess: How pervasive are alternative medicine claims in regards to cancer cures? Is it something that comes up often in your practice?

Dr. Ranjana Srivastava: The whole alternative medicine industry is worth billions of dollars, and so, I think it would be safe to say that you can take it for granted that most
people whom I encounter in a cancer clinic have looked into or tried some form of alternative medicine.

Now, that may be something as benign sometimes as vitamins or supplements, although, there is evidence that even high doses of some vitamins can be
detrimental to health.

Or, it may be exotic things like herbs and spices, or exotic juices, powders that people import from all over the world. I see a range of things. Some
people talk about them, other people ask me for advice about what to do, and then, there is a large number of patients who would simply not think that it’s
something to be discussed in an oncologist office.

Sturgess: Now, there’s been a recent backlash against Belle Gibson–people are angry at the media for raising her profile, at the wellness industry in general–and
of course, at Gibson herself. Is it too simplistic, do you think, to blame one factor when it comes to miracle cancer cure claims?

Srivastava: The Belle Gibson story has certainly caught people’s imagination, and a lot has been said and written about this. 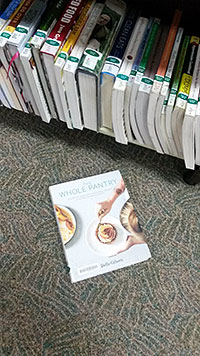 I guess people can make up their own minds about how much or how far they were duped, but I would say that these alternative therapy products, whether they
have to do with diet, exercise or whatever, thrive because we support them, and we buy into them.

And so, I guess the fault lies as much in us as consumers as in the people who are peddling this kind of false stuff. I am sympathetic towards people that
feel that they have been duped, or who have lost a lot of money, or have wasted their health sometimes on these things, but ultimately, I think we have to
be responsible, I suppose, for what we buy and what we believe in.

Sturgess: What are some of the things that people should be wary of when looking for help with health conditions?

Srivastava: I think that old adage about, if it sounds too good to be true, it probably is! It’s an easy one to remember, and time and time again it’s proven to be
true. It’s something certainly that I would encourage people to keep in mind. I would be the first to say that all advice, including medical advice, should
be taken with an open mind.

People should question and also aim to understand whatever it is that they are being told, whether it’s by a doctor, by any manner of other health
provider, or someone else. But at the end of the day, I think if you look at the conventional medical advice that you are receiving, and if you compare it
to some alternative therapy advice? The alternative therapy will guarantee the cure for cancer, or for any number of conditions, which seem too good to be
true. So, I think you do have to go back and look at it with some skepticism.

I don’t know how else to advise patients. It’s heartbreaking when this happened, and as a doctor, I see the end results of someone having gone down this
kind of extreme alternative territory line. But we are all consumers, and we have to take responsibility for what we consume.

Sturgess: Finally, with people becoming more aware of scams, with increased media attention on claims, Belle Gibson is just one example. Should we be optimistic
about improvements on online health advice?

Srivastava: I think there is a whole range of health advice on the Internet that’s good advice, and it comes from reputable sources. For example, in Australia, when
talking about cancer, I would recommend the Cancer Council website, for example.

You can go to Cancer Council Australia, and now, you can find a variety of really good advice and support services, and how to access different things on
that site. But I think that there will always be a range of sites that peddle poor information, that sell falsehood, that sell miracle cures, and it’s very
easy to do.

We see in the era of the Internet, anybody can put up a blog. I don’t know that that’s necessarily something we are going to be able to strongly regulate,
but I would say to people that they need to be savvy, and ask their doctors, or ask other people they trust about trustworthy sites.