On July 4, 2018, a video titled “Ghost Crashes” was shared to a Facebook page called Video Feed, an entertainment website. The video shows a compilation of various car crashes involving a single car appearing to crash into another apparently “invisible” car. In just under a week, the video has gained over 29 million views and over 537,000 shares. I had been sent the video several times, with friends asking if I had any information on it. I decided to take a closer look into it.

The car crashes are typical of what can be viewed in hundreds (if not thousands) of videos on YouTube, collected from traffic cameras and dash cams from all over the world. There are entire channels dedicated to these videos. I spent a few moments reading a few of the thousands of comments attached to the Ghost Crash video; about half declared “fake!” while the other half seemed to be completely mystified by what they saw, swearing these events were genuine cases of the supernatural.

I watched the video several times, and the first issue I immediately noticed was a lot of extra blurring and distortions in the areas where the “invisible” cars should be. In several crashes, smoke (from impacts) vanished much too quickly or swirled around in unnatural patterns due to the elements that were erased or covered up. At times there was a camera shake effect added to the video to make it appear as if the camera was moving (it was not). The visual effects are not horrible, but they’re not particularly good either.

Aside from the poor quality effects, there were a few mistakes made while editing the video. The most obvious is a car that suddenly appears in the background of one of the scenes. At the forty-second mark, a silver car is hit by a “ghost car” and is flipped over onto its roof. Instead of watching the accident car, pay attention to the line of cars on the opposite side of the street (opposing traffic). Just as the accident car begins to flip, the line of cars jumps forward. They don’t roll forward; there’s a definite skip in the video just in that area. Additionally, another vehicle suddenly appears at the end of the line. This is a sure indication of video manipulation. 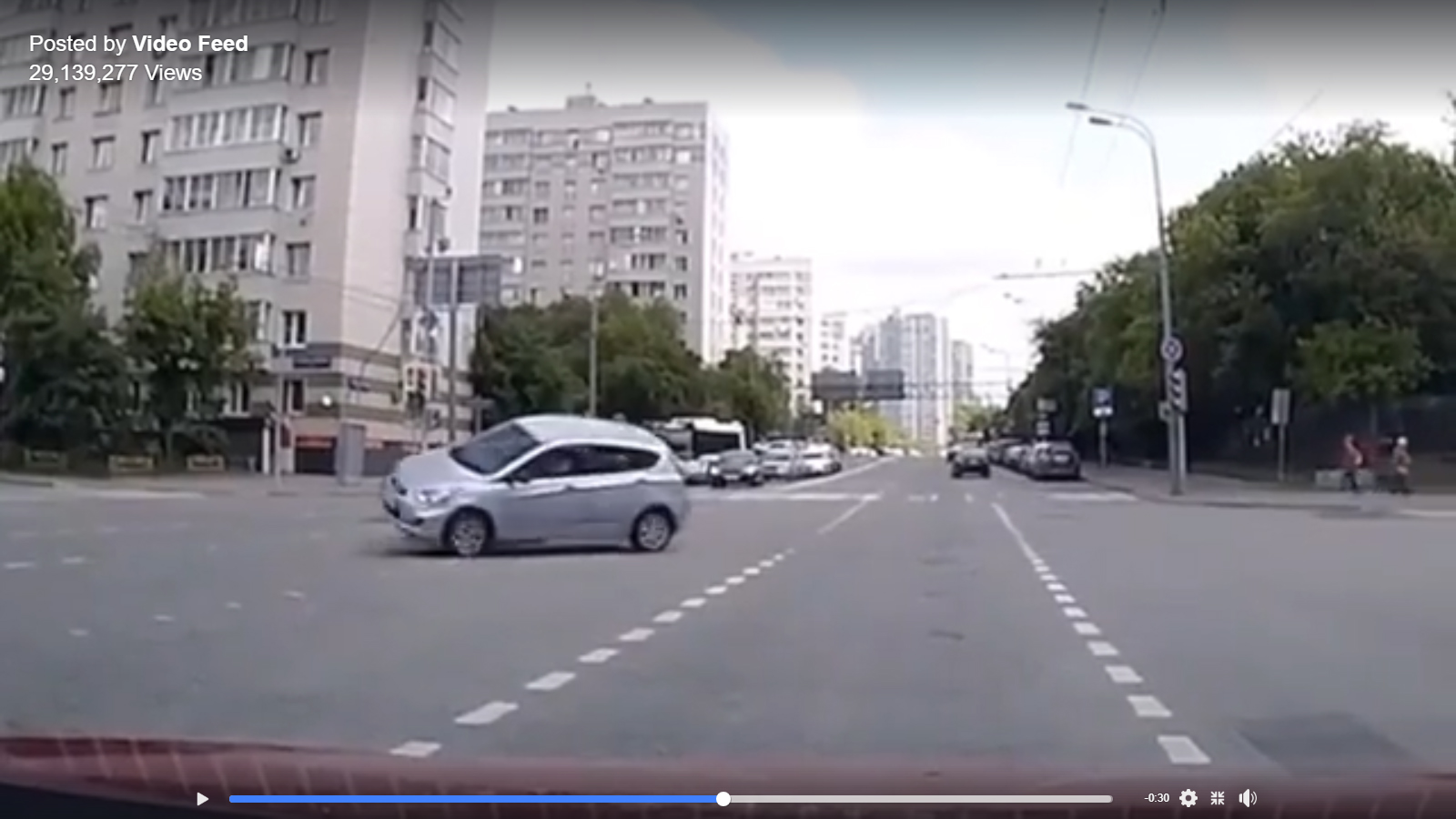 One frame shows a line of cars on the opposite side of the street. 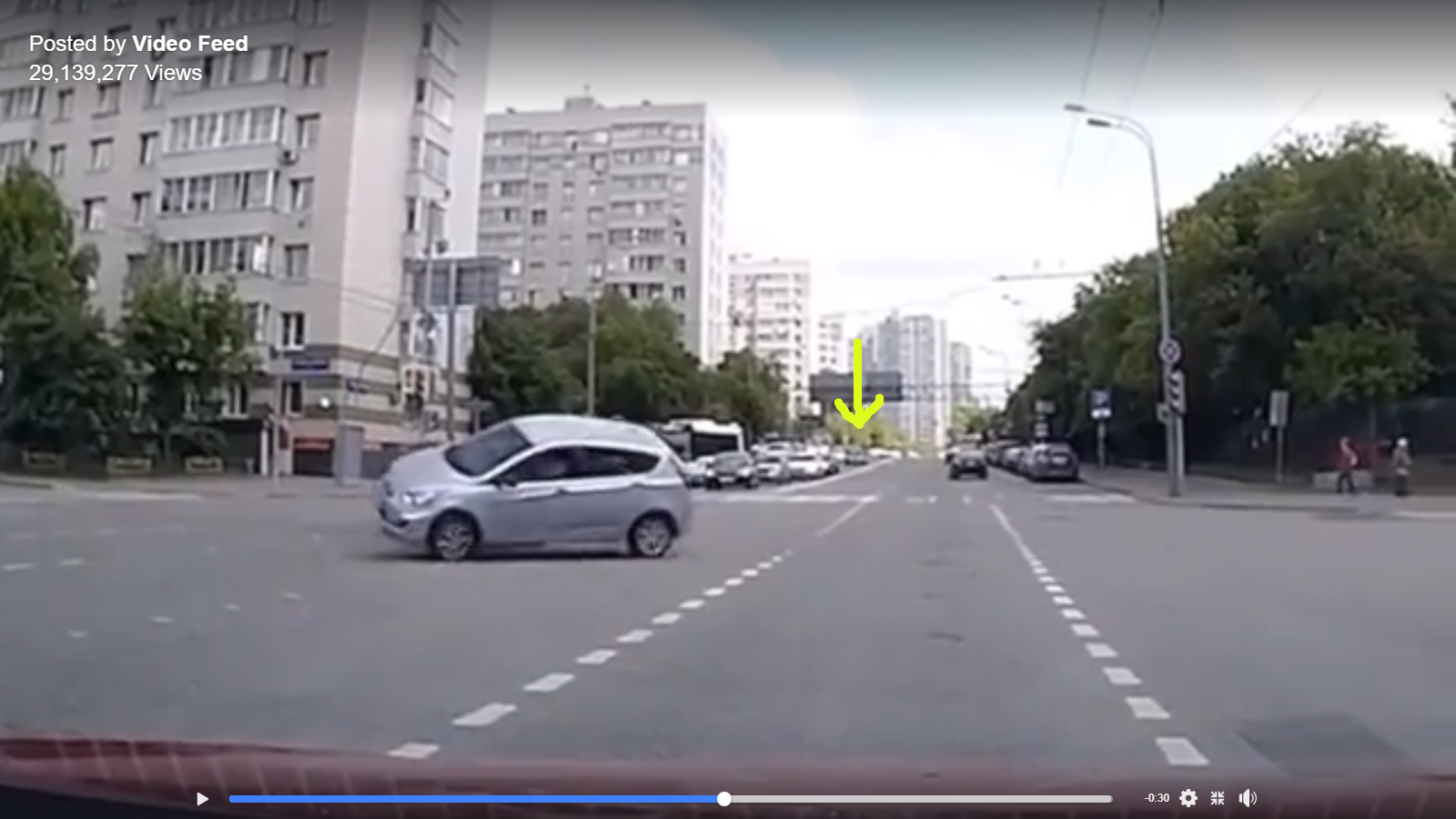 In the next frame, an extra vehicle appears out of thin air. This was caused by an oversight when editing out the ‘ghost’ car.

Each segment of the video is from a stationary traffic camera or dash cam (in a stationary vehicle). This allows for much easier editing techniques. Specific areas of the video can be masked by a screenshot or additional sections of each video, since the camera doesn’t change its view. I’ve used this technique for editing myself into videos as a transparent ghost or making random objects disappear. It requires some practice and a little time, but the skills can be acquired by almost anyone. These techniques (and much more) are covered on the YouTube channel of Captain Disillusion, an incredibly skilled and entertaining visual effects expert.

There was something else that struck me as odd about many of the videos; I could hear all the crashes. Some dash cams do record audio; I own one that has this capability. However, the traffic cams featured also had accompanying audio with them. This didn’t make sense, since they’re usually mounted way up high and are not equipped to record audio (though there are models that do). Even if they were, the sounds of the crashes didn’t always sync with the events we were seeing on the video. They were most likely sound effects added later.

The most obvious indication that this video was a creation and not an incredible compilation of actual “ghost” cars crashing into real cars is how the video ends. One doesn’t have to look into whether visual effects were used or not, they need only to view the video until the end. In the last few seconds, some text appears on screen that reads “by Donato Sansone.” I followed the next logical step and did a Google search for Sansone.

It turns out that Donato Sansone is an Italian Graphic Designer, and “Ghost Crash” was not his first creation. He has uploaded several visual effects-filled videos onto his Vimeo website, a video sharing platform similar to YouTube. While browsing his selections, I found one called “boy-crash” which is a similar type of video, showing a boy getting hit by an invisible car (he was unhurt). “Ghost Crash” was originally uploaded in May 2018 and has since been seen almost 76,000 times on the Vimeo website. Since then, it was shared on various social media pages such as Aperotoon, FeedyTV, and Video Feed where I came across it (and was up to 29 million views as of this writing).

Reading the comments on his personal Facebook page, it became obvious Sansone had fun editing some sequences of real accidents (Sansone 2018). One friend, Juan Scassa, commented “Did you dupe the web, or did the web dupe itself?” There were dozens of comments offering “congratulations” for doing such a good job and fooling so many people. Some of the comments even mentioned a “video manipulating community” that Sansone was a part of.

Even though the evidence so far is more then enough to demonstrate the video is a fabrication, there was still something I wanted to do—find some of the original videos. YouTube is filled with thousands of “Car crash compilation” videos. I knew that looking for matching videos would be time consuming, so I decided to try a shortcut; I went over to Snopes.com. Sure enough, they had also looked into it and, much to my delight had already located several of the original car crash videos. The links below include three of the crash videos in their original form. Incidentally, these three videos, from traffic cams, do not have accompanying audio track.

There is no doubt that what we are seeing, or rather not seeing, are not phantom cars. They are the result of graphic designer flexing and expanding his skills at manipulating video. This is not a case of someone perpetrating a hoax; he made no claims that the video displayed anything paranormal. Sansone simply called his creation “Ghost Crash”; he also put his name on it and made no attempt to hide the fact that he created it. In fact, he proudly posted articles and videos that showcased his creation. I honestly doubt Sansone had any idea his video would be such a sensation.

In the end, Sansone’s work provided him with some notoriety and the satisfaction of millions of people seeing what he created. That would put a smile on my face.