“Are you into Bigfoot stuff?”

The man’s question is genuine, and not directed at me but at a man standing next to me. I’m confused, because they are standing on either side of a table
covered in drawings of Bigfoot, surrounded by people wearing Bigfoot T-shirts and hats that read “Gone Squatchin’,” and they are at a Bigfoot convention.

“You bet,” the other man enthusiastically replied.

Thank god, I think. If he were not into Bigfoot stuff, he was about to have a truly lousy day. 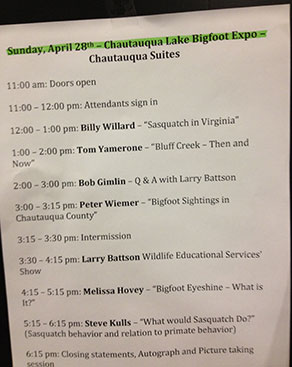 A friend and I had arrived at the Chautauqua Lake Bigfoot Expo ready for a full day of exciting Bigfoot action. The schedule ran from noon until 6:15pm and
was packed with talks like, “Bigfoot Eyeshine—What Is It?” and “What Would Sasquatch Do?” which I imagined as a lecture on top-down morality and ethics as
espoused by a shy, possibly fictional woodland creature.

“For deposit only,” I read out loud, “We Wan Chu Cattages.” I looked at the woman behind the counter and asked, “Cattages?”

In lieu of explanation, she handed us two slips of paper with our seat assignments on them.

We walked into the large, mostly empty conference hall and attempted to figure out the seating arrangements. There were dozens of large, round tables and
some had numbers on them, but they didn’t seem to correlate to the numbers on our slips. After wandering around for a few minutes, a very helpful
conference worker offered to show us to our seats. After wandering the room for a few more minutes, it became clear that she also didn’t understand the
seating arrangements. 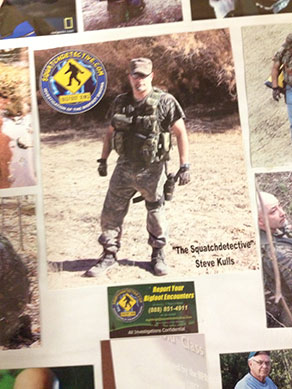 I made a joke about our seats being harder to find than Bigfoot. She smiled politely and directed us toward an empty table near the back.

The crowd was pretty much what I expected of a Bigfoot convention, except for the fact that that Bigfoot wasn’t there. Most of the audience was made up of
adults, with a few families with children sprinkled in. There was a lot of flannel and a bit of camo.

The talks began late, giving us time to check out the vendors, which were mostly artists specializing in the subject of Bigfoot. My favorite was a man who
painted lovely Bob Ross–esque landscapes, each with a Bigfoot hidden somewhere in the foliage.

Finally, the presentations started. All conferences are boring by nature, regardless of their topic, but this one had a few highlights, as when Billy
Willard pointed out that some people report disorientation and sickness when in the presence of Bigfoot, meaning that Bigfoot most likely produces some
kind of infrasound.

“Do you think Bigfoot’s an interdimensional creature?” asked an audience member during Q&A. That question is probably the best I’ve ever heard at a
conference—and I’ve been to a lot of conferences.

“No,” Willard replied, “because I’m a skeptical person.”

The presentations dealing with Bigfoot investigations were, for the most part, a series of descriptions of near-misses. Food was set out, and in the
morning a bite had been taken off of it but no one had thought to set up a camera, so it may well have been a deer that rudely ate the food obviously meant
for Bigfoot. Cameras that were set up to catch Bigfoot just showed an endless supply of deer, foxes, raccoons, cats, squirrels, and owls, but nary
a primate to be seen. And even when footage did supposedly show Bigfoot, even the Bigfoot expo crowd was a bit skeptical. 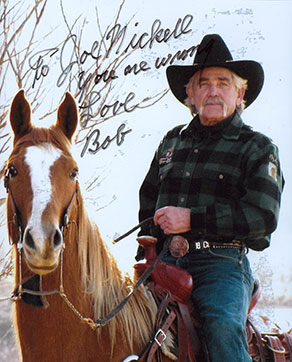 Bob Gimlin, of the famous “Patterson-Gimlin” Bigfoot footage, was the keynote speaker, and the audience was refreshingly irreverent. One of the first
questions was a man who wanted to know why Gimlin headed home after capturing a few seconds of shaky footage instead of chasing after the Bigfoot. Gimlin
hemmed and hawed and shuffled his feet and didn’t really answer the question.

Another audience member pointed out that Gimlin said he viewed the video footage the day after he filmed it. “How did you get it processed so quickly?”

Gimlin said he has no idea, but a friend had connections in the film processing industry. The audience member looked disappointed.

The audience’s skepticism raised my spirits a bit, but Gimlin dashed them when talking about Bob Heironimus, the man who claims he was in the gorilla suit.
Gimlin expressed a desire to go to Heironimus’s house “and give him a cowboy butt-kicking,” to which the audience responded with enthusiastic applause. It
felt wrong and out of place in the midst of a conference where Bigfoot was overwhelmingly described as a gentle giant. Bigfoot would never kick anyone’s
butt.

The other highlight of the day was Steve Kulls’s talk, “What Would Bigfoot Do?” which turned out to be a study of Bigfoot’s behaviors and not necessarily
his ethical concerns. It was fascinating to hear a detailed analysis of the behavior of a creature that has never been proven to exist. Cryptozoologists
often compare Bigfoot to real animals that actual scientists discover living in the wild, like the olinguito, the first carnivorous mammal species
discovered in the Americas in the past thirty years. But, you’d have been hard pressed to find a biologist giving an overview of the olinguito’s specific
behaviors and personality prior to it actually being discovered.

Some of Bigfoot’s behaviors described by Kulls included crossing roads, nodding, staring at women hanging laundry, staring at children, aggression,
screaming, throwing rocks and logs at people for entertainment, and knocking on wood (possibly for luck).

Other talks added a few more behaviors to the list, like Bigfoot’s preference for apples and the fact that he may be bioluminescent.

In terms of appearance, I learned that Bigfoot is red, white, black, brown, or silver and he is anywhere from five to ten feet tall. Also, he smells like
fish or like nothing, and he sounds like a monkey chattering, a baby squealing, a man groaning, or a lion roaring.

One might suspect that Bigfoot can sound, smell, and look like anything at all, which makes him surprisingly easy to find but surprisingly difficult to
prove you’ve found.

After listening carefully to all the talks and considering their evidence, I’ve come to the tentative conclusion that there probably isn’t a Bigfoot, but
looking for him sounds like a lot of fun, anyway. Searching for Bigfoot requires trekking into the wilderness to camp and stalk and hang out with your
friends and use cool technology like night-vision goggles and thermal-imaging cameras. It’s all the fun of hunting without the downer of killing something
at the end.

It’s the perfect hobby, provided you’re not overly concerned with small details like actually catching the thing you’re looking for. In that case, you
might want to try bird-watching.

Rebecca leads a team of skeptical female activists at Skepchick.org and appears on the weekly Skeptics' Guide to the Universe podcast. She travels around the world delivering entertaining talks on science, atheism, feminism, and skepticism. There is currently an asteroid orbiting the sun with her name on it. You can follow her every fascinating move on Twitter or on Google+.

A column by Skepchick.org’s Rebecca Watson

Other Articles from Skepchick

Does your cat want to kill you?

SkeptiCal: The Northern California Conference of Science and Skepticism

Stopping Vaccine Denial: Are We Doing It Wrong?