According
to anecdotes, the machine has been used to treat a wide variety of conditions,
including pancreatic cancer, intestinal parasites, anxiety, depression,
digestive problems, Parkinson’s disease, multiple sclerosis, snoring,
and speech impediments.

For some time, purveyors of
pseudoscience have been name-dropping scientific terms such as quantum,
energy, and vibration in an attempt to lend legitimacy to
their products. It is akin to, many ghost hunters claiming to use the
“scientific method”—one
group even claims
to “employ rigorous investigative protocols, and submit our case reports
to fellow researchers for peer review.” Not to be left out, nowadays
the Denver Metaphysical Fair is less metaphysical and more pseudoscientific.

Moreover, marketing
for these items
is changing. Crystals are repackaged as having “the combination of
far infrared light, negative ions and amethyst quartz [which] opens
the channels for intelligent cellular communication leading to DNA repair
and total body wellness.” Elixirs, potions, and tonics are rebranded
as the “Wonder nutrient of the century-cellular liquid-food liquid
minerals-healthy chocolate a complete RX Defense pack for your Physical-Emotional-Mental-Spiritual
Body!”

Trying
to suggest a semblance of science, paranormal purveyors have swapped
their capes for lab coats. Today’s
paranormal practitioners
often have scientific and scholarly backgrounds; there is a Feng Shui
practitioner with an MBA, an “Oracle” with a master’s degree in
psychology, a Shaman with a PhD, a psychic with a degree in psychology
who works with the police (and Archangel Gabriel), and a teacher with
advanced degrees in chemistry who “developed The Path of the Holistic
Warrior, a system which focuses on balancing inner and outer self-sufficient
realities.”

There was also a so-new-it’s-unnamed
product; yet another device “invented by Tesla” that Tesla didn’t
seem to know about. According to the salesperson, the device uses “electromagnetic
radio wave vibration energy. It’s basically a Chi device. It breaks
down blockages in the meridians. It centers you and lets your body heal
itself.” A member of our party merely pointed at the flashing, humming
machine and received an electric shock. “Careful, it bites” the
salesperson chuckled, although there weren’t any warning signs about
this danger.

Talking
about “breaking down blockages” and “healing” hadn’t enlightened
us about what the machine does any further, so we asked if the device
could cure cancer. “To be perfectly honest, I don’t use the word
cure, but all my clients are cancer free; including me. I had extremely
aggressive skin cancer and a series of strokes. I was also diagnosed
with Crohn’s disease but now I’m completely free of any diseases,”
the salesperson told us. So, he didn’t use the word cure,
but he did use the phrases “cancer free” and “completely free
of any diseases.” The vendor was very cagey when talking about the
product, and for good reason: we recognized it as a remake of the Vibrational
Integrated Bio-photonic Energizer (VIBE) Machine, a device that was
recalled by the Food and Drug Administration (FDA) in 2008.

The
VIBE Machine was created by Gene Koonce, an electronics repairman. He
began manufacturing and distributing the device in 2002, claiming that
it could treat or cure cancer, depression, infection, and pain. By 2008
there were nearly 900 machines in existence and Koonce was selling them
for $17,000–20,000 apiece, mostly to practitioners who would charge
patients for five-minute sessions with the machine.

According
to anecdotes, the machine has been used to treat a wide variety of conditions,
including pancreatic cancer, intestinal parasites, anxiety, depression,
digestive problems, Parkinson’s disease, multiple sclerosis, snoring,
and speech impediments. Some even believe
it cures the soul:
“Some practitioners are using the V.I.B.E. strictly to help people
with illnesses. Others believe the physical healing is just a byproduct—that
the V.I.B.E. has a much broader metaphysical purpose. Some suggest the
machine is helping to raise the vibrational rate of the planet.”

How
does the machine supposedly work? According to one source:

The VIBE Machine works
on five different levels by using a medium electromagnetic field. In
this field, a high voltage pulse is added along with ozone. The charge
is placed at a negative voltage which is being transmitted to an antenna
designed to twist the magnetic field. It is then routed through noble
and inert gases. These gases are in a plasma state, varying in frequencies
which relate to human cellular frequencies. Plasma is found between
the protons and electrons of all cells in the human body. By oscillating
this plasma state, the cells are energized by the VIBE Machine. Disease
is a state found in non-vibrating, non-charged, or non-energized cells.
The VIBE Machine brings the vibrational level of your body back to its
natural state of being. It is a technological breakthrough in enhancing
the human body by helping it reach optimum vibration and energy.

The
FDA recalled the VIBE Machine
for making unsubstantiated medical claims, and the company was also
cited for substantial deviations from good manufacturing practices.
The recall was classified as a “Class 1 recall,” meaning “there
is a reasonable probability that the use of a device will cause adverse
health consequences or death.”
This move was prompted by the death of a thirty-two-year-old Washington
man who had relied on the device rather than seeking orthodox treatment
for his testicular cancer. The practitioners involved in this case were
charged for operating without a medical license and attempting to treat
seriously ill patients.
As often happens with these devices, someone had to die for it to be
recalled.

The FDA press release stated, “The manufacturers, VIBE
Technologies of Greeley, Colo. … claimed their devices treated conditions
ranging from cancer to migraines. The FDA is concerned that based upon
the original health claims made by the company, patients may forgo approved
therapies, and that this could result in more severe illness or death.”
The company was directed to send a certified letter to each customer
who had purchased the device, ordering them to stop using the product
and to cease making medical claims and promoting the product as a medical
device. Yet the VIBE Machine has resurfaced again, much like televangelist
Peter Popoff’s comeback after he was exposed by James Randi. 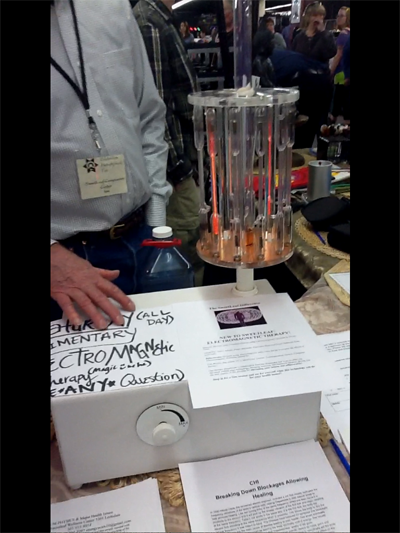 The
Metaphysical Fair vendor offered sessions with the device at the SweetLeaf
Compassion Center, a medical marijuana dispensary (which seems to be
new place for these things to covertly flourish). Here is the advertisement
for the product,
which is replete with medical claims.

Our therapy department is
independent from the dispensary and is set to offer you the latest cutting
edge technology, bringing everyone into harmonic balance, giving you
the best quality of life possible by alleviating pain, nausea and inflammation.

A
VIBE Machine, By Any Other Name

In fact, the VIBE Machine never
really went away. When the FDA began cracking down on the business,
Koonce rebranded his VIBE Machine as the QuantumPulse by VIBE Technologies,
still in operation today. The device has even morphed into several variant
forms, including the Rife Machine, Detox Box, and the Global Wellness
Machine. Of course, the original is the best.

On the current website, gone are the claims that the machine
was “invented by Tesla.” Now, “The QuantumPulse is based on proven
technologies and theories pioneered by scientists.” The site maintains
a practitioner directory so clients can locate a machine. (A second-hand
device was found on eBay being sold for $13,000).

As
per the clauses
outlined in the recall,
Koonce removed all of the explicit medical claims and has replaced them
with ambiguous Law of Attraction-style promises: 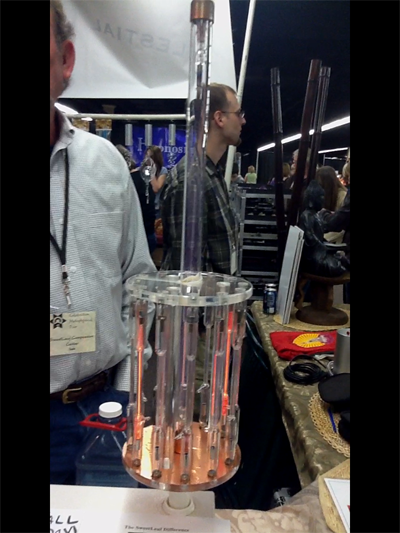 What
can it do for me?

What we are finding is
that it depends on your state of mind, and most importantly, your intent.
“Intent” is defined as “a conscious plan”. Therefore, whatever
you put into your time spent with this machine… whatever your conscious
plan is at the time… will be what you ultimately experience. It could
range from inner peace and profound enlightenment to merely a non-destructive
energy. It’s for you to decide… to create your own plan. Each individual
is unique; their needs are unique as well. What is suitable for one
person may not be appropriate for another. What is important is for
each of us to find the tools we require and to take advantage of them.

Like the “for entertainment
purposes only” caveat favored by television psychics, the QuantumPulse
site features an important postscript: “Nothing on this website is
intended to diagnose, treat or cure any physical or medical conditions.
If you have a physical or medical condition, you should seek the advice
of your medical professional immediately.” And it’s still not FDA
approved. “The QuantumPulse is not a medical device and is not intended
to be used in a medical situation of any kind; therefore, it is not
FDA cleared.”

The
website’s promise that “the QuantumPulse can promote and support
general well-being” is still a medical claim, albeit a vague one.
But as long as the advertising favors language that complies with FDA
law, the device can continue to be marketed and used commercially. However, some sites are still making explicit medical
claims about the device. “[The VIBE Machine] is used to treat conditions
as diverse as cancer, diabetes and depression, all with great success!”

The
FDA has been alerted that the device has re-emerged and that medical
claims continue to be made about the product. The bottom line is that
by any name, the VIBE Machine/QuantumPulse does not work and needs to
be banned from sale and use. Truthful marketing of the machine would
indicate that it’s an expensive, dangerous, ugly ornament.

With thanks to Matthew Baxter
and Bryan Bonner for their research assistance.