Last year, the news media outlet RT News posted a video updating the story of Eric Garner, who died after being put in a police chokehold in July 2014. The July 12, 2016, video, titled “Witness who filmed Eric Garner’s arrest sentenced to prison,” examined the fate of a man named Ramsey Orta, whose cell phone video sparked outrage across the country and around the world, leading to dozens of protests and helping secure a nearly $6 million settlement between Garner’s family and the city of New York. 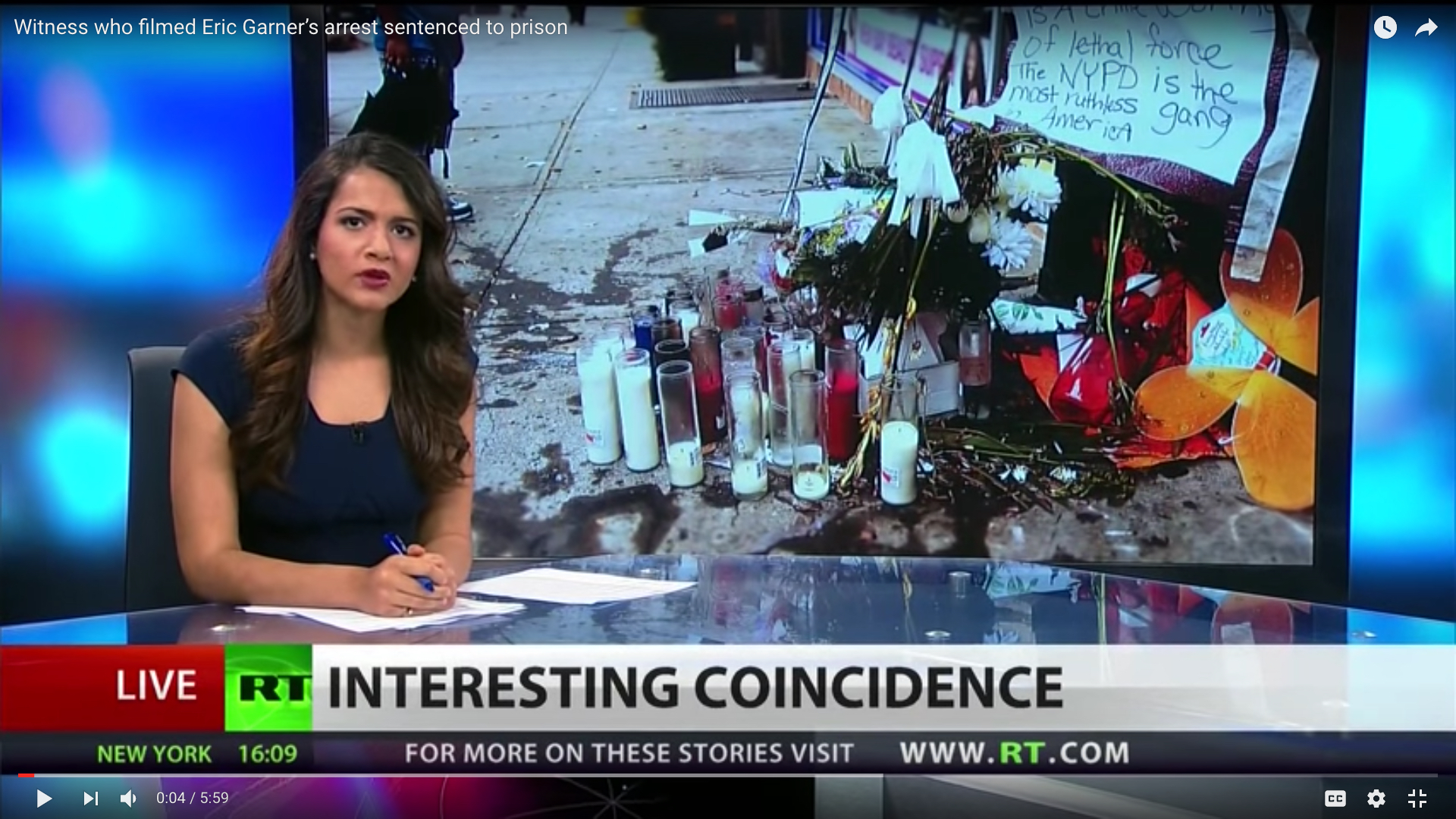 In the video, which can be seen in its entirety on YouTube, anchor Anya Parampil interviews retired NYPD Detective Graham Weatherspoon and asks him: “As the world has just watched the police killings of Alton Sterling and Philando Castile, what message does it send that the only person to have gone to jail from the scene of Eric Garner’s death is Ramsey Orta—the man who filmed it?”

The onscreen caption reads “Interesting Coincidence” and the implication is clear: the justice system punished Orta for exposing police misconduct and sent a “message” to others who record police abusing innocent citizens that they might be jailed for doing so.

Except that Orta was sentenced to four years on Riker’s Island on weapons and drug charges, including selling heroin. There is no evidence or even suggestion that Orta was framed by police (or wrongly arrested or convicted) because of his famous video of Garner’s death, or that it was related to his arrest in any way. Thus, it’s not clear what “message” Orta’s jailing might carry. The fact that no police officers involved with Garner’s death were jailed has no logical connection to the fact that the man who videotaped the assault on Garner went to jail on drug charges.

It’s not clear whether anchor Parampil and her news editors didn’t understand the story or merely chose to spin it in an inflammatory and false way, but in any event the “interesting coincidence” mentioned in the screen graphic is intentionally misleading and trades on Alex Jones–style conspiracy theory. There is nothing “interesting” or relevant about Orta being sentenced to jail for serious crimes that are completely unrelated to his earlier filming of Garner’s death. The written caption under the video clarifies why Orta was sentenced, but the rest of the image and content is clearly misleading.

Detective Weatherspoon, to his credit, tries to clarify the situation while subtly undermining the angle presented by the RT News editor and Parampil. Parampil later raises the question of whether Orta was harassed following the publicizing of his videotape, implicitly suggesting that there may be some connection to his imprisonment—yet no evidence is ever offered for that claim.

Why is RT News peddling misinformation and anti-government conspiracy theory in the guise of social justice reporting? The motivations become clearer when we understand who’s behind RT News: the Russian government. The Russians have engaged in a decades-long sustained disinformation campaign, and as The New York Times notes:

The planting of false stories is nothing new; the Soviet Union devoted considerable resources to that during the ideological battles of the Cold War. Now, though, disinformation is regarded as an important aspect of Russian military doctrine, and it is being directed at political debates in target countries with far greater sophistication and volume than in the past. The flow of misleading and inaccurate stories is so strong that both NATO and the European Union have established special offices to identify and refute disinformation, particularly claims emanating from Russia. The Kremlin’s clandestine methods have surfaced in the United States, too, American officials say, identifying Russian intelligence as the likely source of leaked Democratic National Committee emails that embarrassed Hillary Clinton’s presidential campaign. The Kremlin uses both conventional media—Sputnik, a news agency, and RT, a television outlet—and covert channels, as in Sweden, that are almost always untraceable…. The fundamental purpose of dezinformatsiya, or Russian disinformation, experts said, is to undermine the official version of events—even the very idea that there is a true version of events—and foster a kind of policy paralysis.

The idea that Russians are intentionally fomenting social unrest and government distrust in the United States through news media sounds itself like a conspiracy theory, but it is not. There’s clear and overwhelming evidence of this, and the RT story about Ramsay Orta is a good example; the first comment under the video warns that “This is what TYRANNY looks like!” (For what it’s worth, jailing convicted drug dealers is not in fact what tyranny looks like.) Russia is subtly manipulating well-intentioned social activists to share their viral outrage and anti-U.S. propaganda, and their attempts have become even more obvious in the past year during the presidential elections.

Part of Putin’s goal is (and was) to sow distrust of the Obama administration and outrage people into demanding a change in leadership. That Russia attempted, with varying degrees of success, to influence the presidential election in favor of Donald Trump is beyond dispute and widely accepted by the American intelligence community.

Most Americans were justifiably outraged at Eric Garner’s death, and by misleadingly conflating that with Ramsey Orta’s unrelated imprisonment and suggesting a police conspiracy, Russia Today News is intentionally misleading the American public into unjustified outrage and distrust. It is, in a real way, “fake news.” Disinformation stories such as these undermine the credibility of activist movements trying to bring attention to real social justice problems. As Time magazine noted, “The only way to counter mis­information is to doggedly stick to the facts. The aim of RT is to ‘inundate the viewer with theories about Western plots, to keep them dazed and confused,’ says Peter Pomerantsev, a British expert on Russian propaganda.”

Sincere activists should be on the front lines of guarding against this type of manipulation and manufactured outrage, but all too often people “Like” and “Share” information on social media that confirms their pre-existing assumptions and beliefs. The enemy of your enemy is not necessarily your friend, and those who hype and exaggerate genuine social problems have their own hidden agendas. The best way to avoid being misled is by using, as always, skepticism and critical thinking.