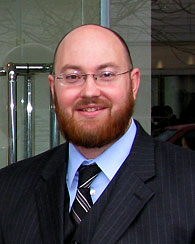 Last fall, it was brought to my attention that John Edward, author of several books, host of SyFy’s Crossing Over with John Edward and alleged
psychic medium, was scheduled to appear in downtown Oklahoma City for two seminars on March 9, 2012. I brought this information to the campus group that I
advise, the UCO Skeptics, and suggested we plan a protest to help educate people on exactly what John Edward would be doing, and that it was in no way
related to supernatural abilities.

The UCO Skeptics are a campus group located at the University of Central Oklahoma, in Edmond (just north of Oklahoma City). Our purpose is to promote an
evidence-based outlook on the world, especially toward claims that involve supernatural, paranormal, and pseudoscientific elements. We actively promote
scientific inquiry, critical investigation, and the use of reason to examine such claims through on-campus programs and speakers, informational booths, and
the like. As a group, we maintain a scientifically skeptical mindset, examining claims based on evidence and not a priori assumptions, while avoiding
cynicism. Compared to similar groups, I think that we represent a more diverse set of worldviews, including atheists, agnostics, freethinkers, secular
humanists, deists, and the liberally religious among our number. We welcome and encourage free discussion of often taboo and off-limits subjects and
challenge beliefs that are held even by our own members.

While we avoid cynicism whenever possible, there are a few things that just rile us up, making us want to shake people and scream data at them. On that
list are so-called psychics, especially those who prey on the bereaved by claiming they can communicate with the dead. All of their “powers” are easily
duplicated using sleight of hand or cold reading techniques, and this has been well documented for decades by skeptical icons like James Randi and Ray
Hyman. Unfortunately, the average person on the street is unaware of this information, as evidenced by the fact that Edward can charge $150 per person for
a seminar where he “talks” to the dead…and draw hundreds of people even in a state as conservatively religious as Oklahoma.

Our protest was intended to be more educational than radical, more informative than angry, more entertaining than upsetting. We knew that we had to appeal
to not only those going to the event but also the high foot traffic we would have coming by us, as there were both pro-basketball (Thunder Up!) and hockey
(go Barons!) games that night near the hotel holding Edward’s event. To that end, we planned a two-pronged approach, described below. First, though, you
need to know the down-and-dirty details of being able to properly pull off a protest.

First, you need a permit. “But it’s my right to protest!” you might say. True, but you still need to follow the rules. Almost all cities and townships
require you to file that you will be holding a protest, including how many people are expected to be there and where you will be. They cannot deny you a
permit based on what you are protesting, and you do not have to tell them in most cases what you are protesting (but if you do, you might get a “Well good
for you, honey!” like we received from the clerk). Second, make sure your protestors know what is and is not okay to do (blocking traffic or impeding the
flow of the public are no-nos, for instance). Third, take a physical copy of your permit with you on the big day, in case anyone tries to hassle you about
not being able to be there. Next, just to be polite, we informed the general management of the hotel holding the event that we would be outside, what we
would be doing, and why we were doing it. After they were assured that we would be a) non-violent and b) not blocking entry into the hotel, they were
completely fine with us protesting, and even said how much they appreciated us informing them in such a polite manner. Finally, in the week leading up to
the protest, I called the news desk of every television station in the Oklahoma City metro area, letting them know what we were doing, when we were doing
it, and giving them our contact information (it helps if you have some contacts in the media, which I do).

Now, on to the main event! For the first prong of our protest, we made the “standard protest” items of flyers and big signs. We focused on having both
informative and funny signs that would draw attention and perhaps start a conversation. I designed the handouts to be a single sheet of paper, folded in
half so it resembled something fancier than what it was. We included several pieces of information in the handouts. Our name and a catchy title for the
handout filled the front cover, in order to let people know exactly what they were getting into. When they opened it up, they found a brief explanation of
what cold-reading is and typical ways “psychics” use those skills to make it appear they have supernatural powers. We also included a “cold-reading bingo”
card (shamelessly borrowed from this site) so that people could play along
either at the show or at home later. On the back side, we included a list of further resources on cold-reading, a brief statement about who we (the UCO
Skeptics) are, and how to get into contact with us (including a QR code that linked to our website).

The protest signs were designed to complement our handouts. As such, they said things like

We also called out to various passersby with “Free psychic readings…from a non-psychic!” and “Learn the truth about psychics!” (among other things, all
tasteful and non-slanderous). Again, our purpose was to challenge but inform. We didn’t want to come off as a bunch of party poopers just here to ruin a
good time for everyone. Hopefully the humor in our signs and handouts helped out.

The second piece to our protest was the inclusion of someone (me) who was skilled at performing cold-readings. As such, we could offer individuals or small
groups their own “psychic” reading, and then explain to them how it works. I gave probably five individuals and three groups a reading, and over half of
them turned out very well (actually higher than the “hit” rates seen in many live shows by the professionals). My favorite one was on the news reporter who
came by to tape our protest for a segment. I managed to tell her the name of both grandfathers, how they died, and what one of them looked like
(unfortunately they cut that out of the story they aired).

Overall, things went really, really well both at the protest and afterward. We protested for about two and a half hours (from an hour before the first show
started until an hour before the second show was supposed to start), handed out close to two hundred flyers, got a large number of supportive shouts from
the people on the street, and were able to directly engage a number of people in one-on-one conversations about scientific skepticism. This isn’t to say,
though, that we didn’t have a few terse confrontations with people. Several people (who apparently did not pay much attention to our signs) misconstrued
what we were doing, thinking we were actually promoting psychics as real and yelling things like “JESUS is MY psychic!” (honestly, that happened
several times from different people). A couple of other people did understand what we were protesting and told us to go home or just leave people alone.

In the next few days, the news story that we were featured in was shown three times on two different channels and was in the “Top Ten” most viewed stories for about ten days. It was even picked up on by a couple of blogs, resulting in several of the skeptics featured in the story
getting recognized by strangers while we were out and about. A poster presentation at the American Democracy Project’s annual conference

won third place
in the student poster competition. I even got asked to write a story about it for some fantastic website…I can’t remember which one, but I’m sure it will
come to me before I finish writing this story.

Even with how well things went, I do feel there were areas we could improve (and will, for the next one!). For example, having agreed-upon things to chant
or say to pedestrians (rather than everyone just saying their own thing) would have made us more cohesive in getting out a specific message. Our signs may
have benefited from larger font sizes, and a smaller number of sayings (again, to improve cohesiveness of the message). I also would have everyone dress
business casual attire, rather than wearing just t-shirts or hoodies, so that we can appear more professional. (One thing we learned was that people seem
to automatically associate holding up a sign downtown with “crazy,” based on the large number of people who wouldn’t even make eye contact with us.)
Alternatively, wearing matching shirts with your organization’s logo can help to get your name out there and show a unified front. Finally, I neglected to
contact the local newspapers, which could have increased the number of people made aware of the event.

For all of those who participated in it, the John Edward protest was highly rewarding. Not only were we bringing skepticism and science to the community at
large, but we were building our sense of unity as a group by coming together to accomplish something worthwhile. Sure, it takes a bit of planning and
effort, but protesting a pseudoscientific event (New Age fair, anyone?) or establishment (alternative medicine providers, perhaps?) can bring attention to
your group and critical thinking to the public. We are already planning our next one!