Indiana has been in the news lately, and most of what we’re hearing isn’t good. First, the long-running comedy show Parks and Recreation came to
an end, cutting off a rich supply of charming images of small town Indiana life. Then on March 26, Governor Mike Pence signed a bill that I’m fairly
certain Leslie Knope would not have supported: the “Religious Freedom Restoration Act” (RFRA). Although the Governor claims the bill “is not about discrimination,” it is widely interpreted as being very much about discrimination. In June
2014, the U.S. Supreme Court’s 5-4 ruling in Burwell v. Hobby Lobby found that the 1993 federal version of the RFRA allowed “closely held” companies such as Hobby Lobby to deny contraceptive benefits mandated
under the Affordable Care Act. Suddenly it was easy to see how RFRA could be used to deny services to gays or anyone else whose demographics were
unsupported by the religious views of a business owner.

The media storm about the RFRA almost completely obscured another action taken by Governor Pence on the same day. The governor declared a public health
emergency in Scott County, where seventy-nine new cases of human immunodeficiency virus (HIV) infection have been identified since mid-December in a
location that usually has a total of five cases per year. A team from the Centers for Disease Control and Prevention was called in to Scott County, and the
state initiated several efforts aimed at combating the outbreak.

The science is clear. Needle exchange programs, or what are more properly called Syringe Services Programs (SSP), work. The Substance Abuse and Mental
Health Services Administration (SAMHSA), a branch of the U.S. Department of Health and Human Services, puts it this way:

Recent studies have affirmed SSP’s efficacy in encouraging and facilitating entry into treatment for intravenous drug users (IDUs) and thereby reducing
illicit drug use. Numerous studies have also documented SSP’s effectiveness in reducing the risk of HIV infection among IDUs and their partners.[1]

In 2011, the U.S. Surgeon General, Regina Benjamin, entered the following statement into the Federal Record.

[SSPs] would be effective in reducing drug abuse and the risk of infection with the etiologic agent for acquired immune deficiency syndrome. This
determination reflects the scientific evidence supporting the important public health benefit of SSPs.

1. It decreases the rate of HIV infection in users and their partners; and

2. It actually decreases rates of addiction by exposing users to people who can help get them into treatment.

Yet in a striking rejection of science and the public interest, federal law prohibits the use of federal funds for SSPs, and many states have drug
paraphernalia laws that make it impossible to introduce SSPs. As Anna Maria Barry-Jester points out in a piece at FiveThirtyEight.com, most of the prohibiting states are
red. States that allow syringe programs are more likely to be blue. Indiana is a mostly red state with laws that currently make SSPs impossible—except, as
it turns out, in emergencies. In a statement that flies in the face of evidence,
Governor Pence said on March 26, “I don’t believe that effective anti-drug policy involves handing out paraphernalia to drug users….” In fact, an effective anti-drug policy would do just
that.

Thankfully, a wiser politician, Republican state legislator Ed Clere, disagrees with the Governor and has introduced a bill that would make SSPs legal
throughout Indiana. In another sad bit of irony, Clere introduced the bill last year and it failed.

This appears to be one more instance of a political or moral ideology trumping the available evidence to the detriment of public health.[2] Opponents of SSPs are reluctant to give heroin and prescription drug users the
tools of their addictions, something that probably seems immoral to them. Supporting
SSPs might make a politician vulnerable to claims of condoning drug use and being “soft on crime,” both of which would be particularly damaging in red
states. But when an HIV outbreak becomes a public health emergency, even Republicans come looking for evidence-based solutions.

By temporarily allowing needle exchanges in Scott County, Governor Pence has made a tiny step in the right direction, but the inadequacy of the response
becomes obvious when you step back and take a look at the wider effects of intravenous drug use in the United States. Consider the following graph from the
National Institute on Drug Abuse.[3] 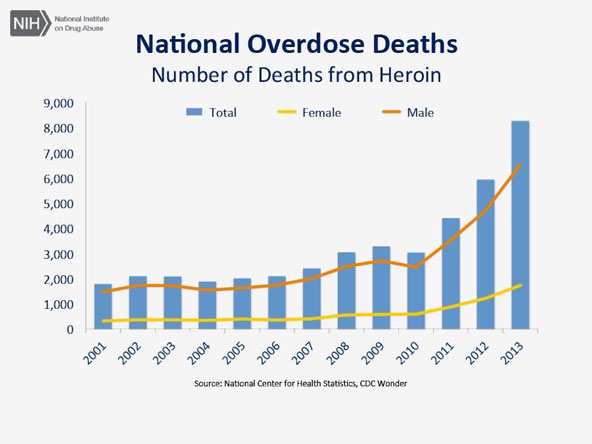 Infection with HIV is a horrible personal tragedy, but it is not the death sentence it once was. In contrast, death from overdose is the end of a
life—often a young adult life. Furthermore, overdoses from heroin are only the tip of the iceberg. The wide availability of modern prescription opioids has
made overdoses of commercially manufactured pain medications much more common than heroin overdose, as Figure 2 shows. 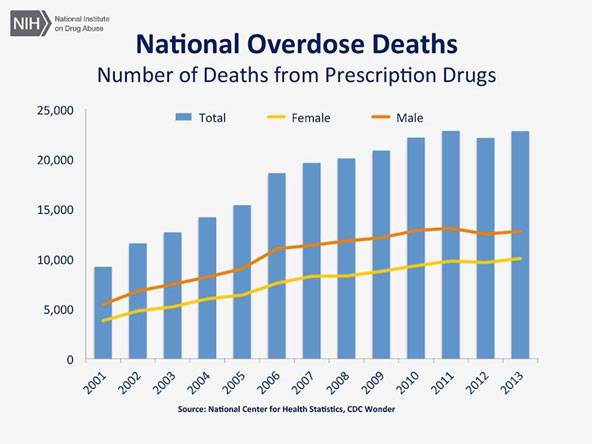 Prescription drug addiction is an enormous problem in the United States. The
HIV outbreak in Scott County, Indiana, stemmed from intravenous use—not of heroin—but of Opana (14-Hydroxydihydromorphinone), a powerful prescription pain medication made by Endo
Pharmaceuticals. Indeed much of the current demand for heroin appears to be coming from users who first become addicted to prescription medications and
then move to heroin when the price or availability of the street drug is more favorable.[4] This is a classic case of economic choice with
substitutable commodities.

Scott County is an economically depressed rural area in southern Indiana, and it has had a serious drug problem for several years. A 2012 National Public Radio story on the high rate of prescription
opioid use in Scott County reported that there had been thirty-one overdose deaths in the previous year, a substantial increase. There have been vigils for
victims of overdose, and County Sheriff Dan McClain recently worried that an entire
generation might be lost to drug addiction. But despite this festering problem, drug use in Scott County only became a public health crisis when it turned
into an HIV outbreak. Between one and three dozen overdoses per year in a county of only 25,000 residents was not an emergency. Why?

It seems to me the answer can be found in our differing reactions to drug overdoses and HIV. Drug addiction bears a heavy weight of moral stigma, perhaps
even greater than the stigma associated with HIV infection. Despite the many social and economic forces that play a role in the current plague of
addiction, drug use is considered a choice—a bad life decision with predictable outcomes. In contrast, Acquired Immune Deficiency Syndrome (AIDS) is an
infectious disease. HIV/AIDS can spread by the use of contaminated syringes, but it can also spread by engaging in other, perfectly legal activities. The
possibility of HIV being passed on to morally innocent people appears to have finally captured the attention of state government.

Scott County, Indiana, is a harbinger of problems faced in many other places, and if moral and political philosophies continue to stand in the way of
evidence-based procedures, then the rising tide of death and infection will continue. Let us hope that Governor Pence’s actions will lead to a more general
recognition that people struggling with addiction are worthy of our concern and that needle exchanges and other effective programs should be promoted in an
effort to help them.

[3]
Figures 1 and 2 come from http://www.drugabuse.gov/related-topics/trends-statistics/overdose-death-rates