Cover Image: Facebook Post by Derek Kevrea — “I’m speechless. Thomas John: Celebrity Medium communicated with my Grandpa. Said ‘He’s proud of you’. It’s a miracle I held it together.”

If you have been following the career of Thomas John “Seatbelt Psychic” Flanagan also known as The Manhattan Medium through my various investigations, then you are all good; this article will make you say, “Really? He is still out there doing his thing?” Yes, he is still getting media coverage; this time it is a WJBK Fox2 in Detroit on June 12, 2019, video shared on Facebook.

In early June 2019, I wrote an update on most that has happened since the New York Times article describing my “Operation Pizza Roll” in March 2019. Within a few days of that publishing, I saw that Thomas John had a live Facebook reading in which he talked about me without actually naming me. He called me a “total whack job,” “this crazy lady,” and stated that his show (Seatbelt Psychic) “is not staged.” He said that he would soon be releasing a video on YouTube that would “address all this.” So, I’m waiting and watching for it. He has blocked me on Twitter, which is really odd given I’ve never tweeted anything at him or even mentioned him. But okay, so I switched over to one of my other accounts that follows and interacts with him (one of several actually) and have been watching for his promised video.

Very soon he put up two videos, one includes three moms who talk about how amazing and accurate he is. Another video he shared was him on morning TV, WJBK in Detroit. I don’t know if either of these are the “promised video”—I guess I’ll just have to keep watching!

Apparently, Thomas John has been a guest on the show at least twice before, judging from the comments from the woman in blue dress that her family usually comes through and no one else gets a reading. Then Thomas John says, “Your family has come through a couple of times.”

The meteorologist, Derek Kevra, is sitting directly across from Thomas John who zeros in on him. The reading progresses with direct “hit” after “hit,” even specific names are given. Kevra validates and offers more information. Throughout Kevra is fully-focused on Thomas John, nodding and giving feedback, the perfect sitter for Thomas John. I’m going to get to the reading in a few minutes, but what I’m addressing here are the comments that Kevra makes at the end of the six-minute reading. The woman in the print dress asks Kevra, “What do you say to people who say you can just look up Derek’s grand[parents]? Is that something that you posted about recently?” And Kevra responds “I don’t think my eighty-six-year old grandma is online anywhere … I don’t think I’ve ever posted my grandmas name anywhere. WOW!”

So, we have a testable claim. This is how scientific skepticism works. We are looking for something that we can investigate. The question is, what information can a stranger find about Kevra’s family on the internet? Remember, we aren’t specifically looking for Kevra’s grandparents, we are just looking for whatever we can find. And I suggest, dear reader, that before I tell you what our team found, you try doing an internet search for Derek Kevra. Check social media also. What do you find?

Hopefully you watch the video, but if you don’t here were many specific hits that Thomas John got.

Kevra throughout the reading and at the end was offering feedback and said that it was all accurate. On the Facebook video that Kevra shared, he writes, “I’m speechless … Thomas John communicated with my grandpa … He said he is proud of you … it’s a miracle I held it together.”

I’ve written to Kevra on Facebook Messenger, Twitter, Instagram, and via email asking if after a few days of thinking about it, is he still “speechless”? Does he still think that his grandfather and coworker were talking to him? I know he saw the message on Facebook Messenger, but I haven’t received a response. I’ll update this article if I do hear back.

It isn’t the sitter’s fault when this kind of thing happens; Kevra might not have even known that a psychic medium was going to be on the show that morning or that he would be the sitter. If this isn’t a world you are used to, then why would you even consider it possible to communicate with dead people? Kevra is a meteorologist, so I suppose that means he has had a lot of science classes and I assume that means the tenants of the scientific method were explained to him. Caught up in the moment, especially when your coworkers are sitting right there saying that this is real, it’s easy to see how someone might believe all this. Plus, this is live morning TV, everything needs to be happy and fun. He needs to play along. What perplexes me is his comments on the video. Oftentimes sitters go home and tell others the story and someone says, “Really? You believed all that?”

Hopefully you had a chance to do a search for Derek Kevra’s family. Here is what my team found: 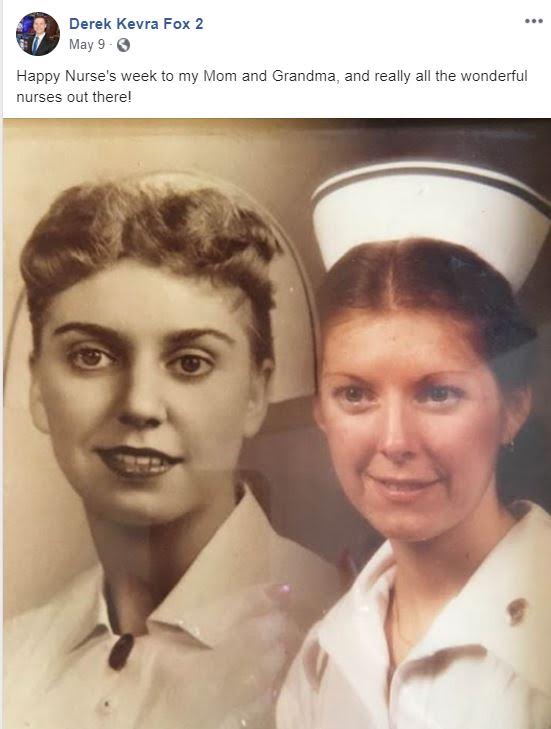 So social media and a quick internet search found a lot. Keep in mind that this was at least the third time Thomas John has visited this set. He’s a friendly guy and people like to talk when getting their makeup and hair done, people want to tell stories … I’m sure you can imagine how much a good listener can easily pick up if they ask open-ended questions. If my team had wanted, we could have data-mined a lot more; all these social media accounts are wide open.

How did we do on this testable claim? Well, we didn’t find anywhere that Kevra had specifically called his grandma by her first name, Leonora, but he has many social media accounts and the name was all over in other places. Both his mother and grandmother were in news segments for the show, so why did he think he never talked about his family? Just because grandma isn’t on social media, does not mean that the rest of your family isn’t?

At the very end of the segment, Thomas John talks about his response to skepticism. I transcribed what he said but the written words miss the inflection of his tone. Too many run-on sentences make it difficult to understand his point about healthy skepticism. I could try to sum up what he says but it is probably best you listen to Thomas John’s words himself; it is at minute 7:00. The other host agreed and said, “Cause there are a lot of people out there that are pretending,”

Kevra sums it all up, “Very comforting to know that grandpa’s proud of me, that’s really nice, he passed away when I was eighteen so he never got to see me do any of this”. And this, dear readers, is why people are willing to suspend critical thinking and fall into the well of pseudoscience, comfort.

Thank you Mark Edward and Derek Waugh for help cleaning up this article for publication.

And a special thank you to the editorial and web departments of SI for their continued patience with me.