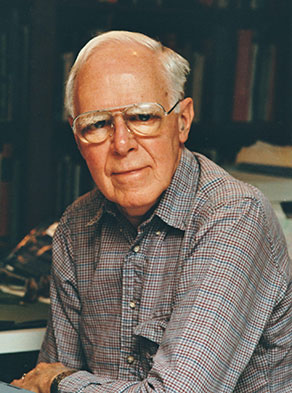 Martin Gardner was born one hundred years ago, on October 21, 1914. To commemorate the centennial of the birth of one of the greatest figures in modern
scientific skepticism, we have decided to republish a selection of his “Notes of a Psi-Watcher” and “Notes of a Fringe-Watcher” columns from the Skeptical
Inquirer on our website.

The articles selected were chosen to not only highlight the wide range of topics that came under the scrutiny of Martin’s wit and curiosity but also to
showcase the varying writing styles Martin used to combat pseudoscience. On one hand, he could cut like a surgeon and be dry and acerbic, while on the
other he could be lithe and deft at turning a humorous phrase. 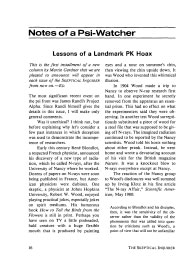 Lessons of a Landmark PK Hoax

“Lessons of a Landmark PK Hoax” was a supportive commentary on James Randi’s elaborate Project Alpha, which Randi reported on in an article in the same
issue. Randi had arranged for two young conjurors to visit the McDonnell Laboratory for Psychical Research at Washington University, St. Louis. After two
years of experiments with them, the head of the lab, physicist Peter Phillips, became convinced that the two teenage magicians, Steven Shaw and Mark
Edwards, could bend metal objects, cause light streaks on film, turn a motor under a glass dome, make fuses blow, and similar wonders, all with the power
of their minds. Randi’s intention was to demonstrate that parapsychology-minded scientists would resist accepting expert conjuring assistance in designing
proper controls and therefore be easily fooled by magic tricks. When revealed as a hoax, the revelations garnered worldwide media coverage and greatly
embarrassed the lab. It closed in 1985. In 1986 Randi was given a MacArthur Foundation award to continue his work in debunking fraudulent claims. 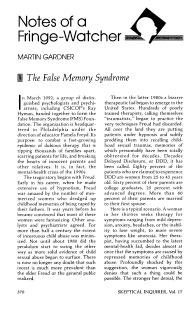 In the late 1980s a therapeutic fad began to emerge wherein therapists began putting people under hypnosis or into a
relaxed, trancelike state, to coax out repressed childhood memories of sexual traumas. In many instances families were torn apart as patients recalled
vivid memories of abuse at the hands of parents, grandparents, and other various loved ones. Other patients recalled abuse by day care staff, satanic
cults, or even extraterrestrials.

In this column Martin writes, “That traumas experienced as a child can be totally forgotten for decades is the great mental health myth of our time—a myth
that is not only devastating innocent families but doing enormous damage to psychiatry,” and chronicles the beginnings of the “False Memory Syndrome.” 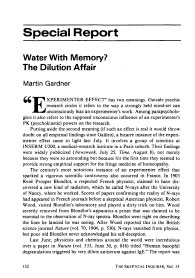 Water With Memory? The Dilution Affair

Can water remember? This question was at the heart of a major scientific debate launched by Nature Magazine when it published a paper by French biochemist
Jacques Benveniste titled:

As Gardner explains in his article: “What were these claims? In essence the French researchers were convinced that, after all the molecules of a certain
antibody were removed from distilled water, the water somehow ‘remembered’ the antibody's chemical properties. Although such a claim violates fundamental
laws of physics, it lies at the very heart of homeopathy…”

The results were so unbelievable that Nature itself published an editorial called “When to believe the unbelievable” and cautioned that “An article in
this week’s issue describes observations for which there is no present physical basis. There are good and particular reasons why prudent people should, for
the time being, suspend judgment.” And as a precondition of publication Benveniste had to allow a team of investigators into his lab to witness a
replication of his experiments. The team included the editor of Nature, John Maddox, Walter Stewart, an organic chemist at the National Institutes of
Health, and James Randi. 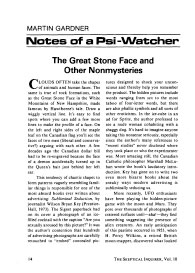 The Great Stone Face and Other Nonmysteries

Oh, who doesn’t love a good case of pareidolia? Whether it is the Virgin Mary spotted on a turtle shell, or the face of Jesus on a tortilla shell, (banana,
tree stump, etc.) we love to, indeed we are programmed to, look for patterns and familiar shapes in random stimuli or chaotic data. In this article, “The
Great Stone Face and Other Nonmysteries,” Martin takes on tour of various cases of pareidolia with particular emphasis on the alleged “Face on Mars” that
has nearly become a popular culture icon. So read this article, and then go outside and take a look up at the clouds. Have yourself a little fun and try
and see who might be looking down at you. 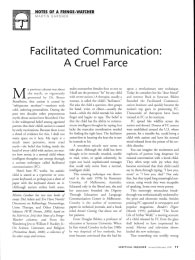 Martin says it best: “My topic is a much more pervasive, more cruel myth—the belief that hiding inside the head of every child with autism, no matter how
severe, is a normal child whose intelligent thoughts can emerge through a curious technique called facilitated communication (FC).”

An autistic child is seated at a typewriter or computer keyboard, accompanied by a “facilitator.” The child is asked a question and the facilitator holds
the child’s hand or arm while the child types. As Martin states, “A wondrous miracle now seems to take place. Although the child has been thought to be
mentally retarded, unable to read, write, or speak coherently, he types out lucid, sophisticated messages that could only come from a normal, intelligent
child.” 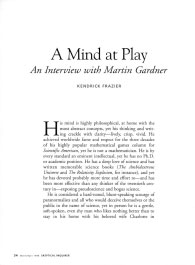 A Mind at Play: An Interview with Martin Gardner
Kendrick Frazier

At eighty-three, Martin Gardner reigns supreme as the leading light of the modern skeptical movement. More than four and a half decades ago, in 1952, he
wrote the first classic book on modern pseudoscientists and their views, Fads and Fallacies in the Name of Science, and today it remains in print and
widely available as a Dover paperback and is as relevant as ever. It has influenced and inspired generations of scientists, scholars, and nonscientists. He
followed that up in 1981 with Science: Good, Bad, and Bogus. In an essay in the New York Review of Books entitled “Quack Detector,” Stephen Jay Gould
welcomed the book and said Martin Gardner “has become a priceless national resource,” a writer “who can combine wit, penetrating analysis, sharp prose, and
sweet reason into an expansive view that expunges nonsense without stifling innovation, and that presents the excitement and humanity of science in a
positive way.”

Martin Gardner is author of more than seventy books, most recently The Jinn from Hyperspace and When You Were a Tadpole and I was a Fish, and Other Speculations About This and That.