Following the current flare up of the Israel/Palestine conflict, a meme has been circulating around the Internet. In it, Laurence Fishburne, as the
character Morpheus in The Matrix, is sitting in a comfy chair calmly explaining the hidden nature of reality to Neo:

“What if I told you that Israelis have no historic or genetic connection to Palestine but in fact originate from the Caucasus and a people called the
Khazars?”

In the corner of the image is web address: davidicke.com. 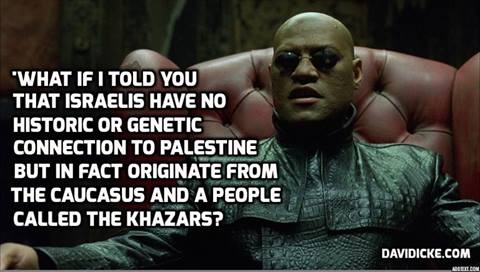 The question here is about the origin of Eastern European Ashkenazi Jews, who comprise around three-quarters of the global Jewish population, a large
percentage of American Jewry, and about half of the Jews in modern Israel. The meme is expressing an idea that is the end result of a long evolution which
is partly rooted in the British colonial rule of Palestine in the late 19th century. The argument in Britain went something like this: “The Holy Land plays
an important part in the final days and the return of Christ. The British Empire currently—and likely will for a long time—governs the Holy Land.
Therefore, we British are preordained to play some important role in the Second Coming. We knew we were special.”

This in turn led to a movement called British-Israelism, the idea that the British are in fact genetically tied to the Jews of the Old Testament,
essentially one of the lost tribes. The belief, when it hopped the pond to the Americas, became the ideological progenitor of the Christian Identity
movement, which posits that God’s chosen people are really white American Christians.

Hence, the idea that there are false Jews.

The earliest incarnation of the idea that the Ashkenazi Jews descended from Khazars in the Black Sea region appears in 1883 in a lecture given by French
scholar Ernest Renan. Michael Barkun traces the subsequent development of this idea in his Religion and the Racist Right: The Origins of the Christian Identity Movement, an excellent and detailed book.

In the US, the idea can be traced back through a Klan leader in the 1920s, Reuben H. Sawyer, who popularized the idea that the “authentic Jews” were
Sephardic Jews (those from the Iberian Peninsula and North Africa) and who decried Ashkenazi Jews as imposters who were hell-bent on destroying
Christendom. In the later ‘20s, the popular racial theorist Lothrop Stoddard opined that ancient Hittite sculpture looked really sort of Jewish (Barkun
127), ushering in the idea of a tainted bloodline.

In the 1940s, this idea metastasized in a religious tract called, When? When Gog Attacks, which was authored by an obscure group called the
Anglo-Saxon Christian World Movement. Barkun notes this tract formulated some notions that would reappear in Christian Identity-style anti-Semitism,
including: “Cain as the founder of the ‘synagogue of Satan’; the ‘Turko-Mongol’ origin of Ashkenazi Jews; the blood of fallen angels among Jews; and the
historicity of the Protocols of the Elders of Zion. As the pamphlet’s author concludes, ‘The Ashkenazim are neither Jews nor Semitic by blood or
race’” (51). (Indeed, in the extreme form of this belief in modern Christian Identity, the root of Jewishness can be found in the union of Eve and the
serpent in the Garden of Eden, which will become an important point when we consider David Icke.)

The idea that the Ashkenazi bloodlines come from Asia (and the corollary notion that Eastern European Jews were mostly converts) denied them any historical
claim to the Holy Land, and this became very important after the Second World War, which saw the dawn of the Cold War and the establishment of the state of
Israel in 1948. Eastern European Jews had long been scapegoated as being responsible for the rise of communism, and Zionism was seen as the mechanism by
which Jews would ascend to global hegemony.

The racist right in the US could look confidently at the establishment of Israel and its subsequent population with Jews from Eastern Europe as justifying
both Cold War fears and religious paranoia. Denying the population of Israel both genetic and historical claims to Palestine was a method of resisting the
commie-globalist Jewish cabal.

Is there any truth to the idea that the Ashkenazi Jews are Khazar? The genetic history of the Jews is complicated (Elhiak, Costa). The Jewish people are
diasporic, widespread throughout the Mediterranean for at least 2000 years. The global migration of Jewry has been the subject of much historical research,
and genetics promises to add additional context to that history. In fact, modern genetics have already shed some light on the ancestry of the Ashkenazi.
According to geneticist Harry Ostrer, the Ashkenazi are genetically more similar to Sephardic Jews of the Mediterranean than they are to their geographic
neighbors, who would presumably share the most genes with the historical Khazars (Yandel).

There are some surprises in the Ashkenazi genome, for instance that mitochondrial DNA, which is inherited exclusively through the maternal line, shows that
half of Ashkenazi Jews share DNA from just four women. There has been much debate about where those women came from, and the evidence suggests they were
European women from the north Mediterranean. While the size of the European contribution to the Ashkenazi genome is the subject of ongoing research,
geneticists seem to agree that the Sephardic and Ashkenazi Jews are genetically linked and that they share those genetic markers with Jewish populations
from the Middle East (Fischman).

So, why is David Icke circulating the Matrix meme? David Icke is a retired British footballer, sports broadcaster, and Green Party spokesperson who has
embarked on a fourth career as a New Age guru who claims that the world is controlled by capitalist reptilian bloodlines.

Icke has adopted a version of the Matrix meme, that the world is decidedly not as it seems, but is a false image projected into our minds from the hollow
moon, which is also a spaceship. So, the imagery appeals to him. Secondly, it’s often really hard to distinguish the things that Icke says about the lizard
people and the things that run of the mill anti-Semites say about the Jewish New World Order, and I think that the far racist right hears a dog whistle
when he says “reptilian,” which they interpret as “Jews.” It probably confuses things further that the American Christian Identity movement actually thinks
that the people they believe are imposter Jews are descended from the serpent in the Garden of Eden.

Furthermore, Icke has never exactly done much to dissuade people who have made their minds up that he is an anti-Semite. He does, however, seem to think
that the Jews as a group are controlled by outside alien entities, as are Muslims, the Council on Foreign Relations, the UN, the Freemasons, and all other
social institutions. In Icke’s schema, everyone is a pawn, including the Jews.

The scheming that he believes puts Khazars in Israel is not necessarily that of the Jews themselves, which… maybe?… makes it less racist? Maybe?

Barkun, Michael. Religion and the Racist Right: The Origins of the Christian Identity Movement. University of North Carolina Press, 1996. Print.

Elhaik, Eran. 2012. "The Missing Link of Jewish European Ancestry: Contrasting the Rhineland and the Khazarian Hypothesis." Genome Biology and Evolution 5: 61-74.

Fischman, Josh. 2012. "The Chosen Genes." The Chronicle of Higher Education. Online at: http://chronicle.com/article/The-Chosen-Genes/131481/

Yandell, Kate. 2013. "Genetic Roots of the Ashkenazi Jews." The Scientist. Online at: