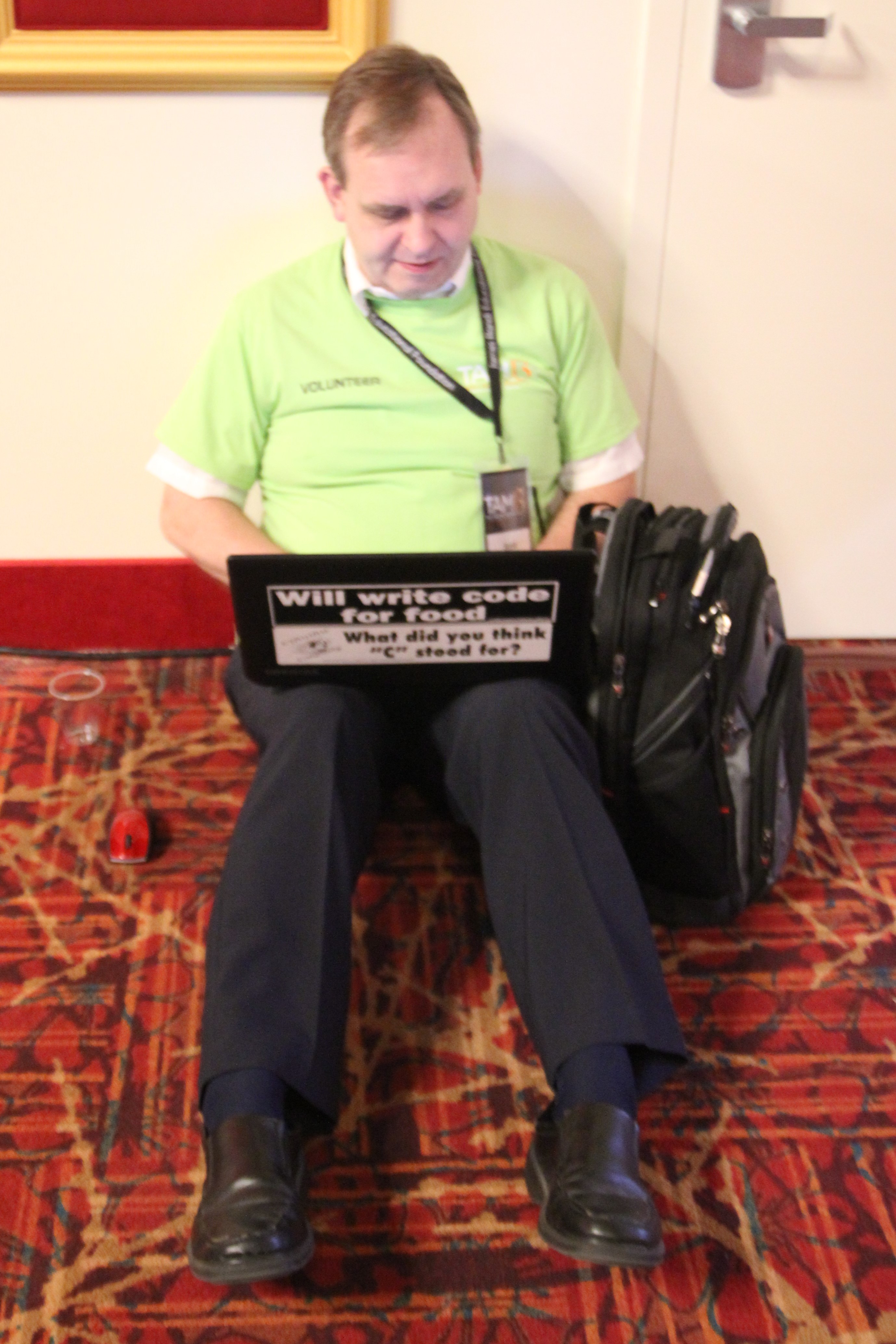 Working behind the scenes to make a conference run smoothly is usually an army of people. Over the years, I and others have come to appreciate the calm and organized nature of Scott Romanowski. After seeing him at over 9,000 skeptic conferences, I thought maybe I should talk to him about how he came to be in charge of volunteering, and hopefully he’ll share some history and behind-the-curtain stories with us.

Scott Romanowski: I’m an electrical engineer and have been writing software for embedded systems like toys, GPS receivers, and coffee brewers for thirty years. I already had a history of helping before I attended my first TAM. I GMed the Squad Leader tournament at Avaloncon 1992, then helped as an assistant GM for the Advanced Squad Leader tournament there in subsequent years.

Gerbic: How did it happen that you became the skeptic volunteer guy?

Romanowski: I didn’t plan to become the “volunteer guy”; it just happened. At the first The Amaz!ng Meeting in 2003 (TAM wasn’t numbered at the time), I passed Hal Bidlack, Linda and Karl Shallenberger, and others unloading boxes of books into a suite. I recognized some of the books as being for TAM. This was my first TAM and I knew no one, so I offered to help. Later, during a break, I noticed Linda sitting at one end of a long set of tables, with so many people standing there with books in hand, looking for where to pay, they couldn’t see Linda. I offered to stand at the far end and tell people to go to her to pay. She accepted. The table proved to be a good place to hide later. Hal Bidlack coordinated the volunteers for TAM 2, and I volunteered. Hal was too busy with MC duties to do it at TAM 3, and I was asked if I could take over that role. The role later expanded to coordinating the speaker-media interviews.

After TAM13, Ray Hall asked if I could coordinate the volunteers at CSICON. I of course said yes, and here I am!

Gerbic: As someone who has attended a lot of TAM’s what are some of your memories?

Romanowski: The JREF Forum was the place to talk about JREF back then. About a dozen of us planned to get to the hotel on Thursday before TAM, drive to Kennedy Space Center, then return to attend Randi’s internet talk show at the JREF. I remember our tour guide at KSC was so cheerful. She said if any of us were going to be in the area, even as far west as Orlando, we should listen to the double sonic boom on Saturday from first the nose then the wings of the space shuttle. That was Thursday, January 30, 2003.

You may know where this is headed.

That Saturday morning, I stepped out for a moment and passed Randi. Randi looked like he had a bad head cold with running eyes and nose. I asked Linda if Randi was OK, that I hoped he didn’t have a cold. Linda told me that Randi was upset because they had learned we lost the Columbia, that there was going to be an announcement, and not to say anything. I went back inside for the last half of Michael Shermer’s talk but I don’t remember anything about it. Phil Plait wrote about it. I wanted to be alone during the break, so I took up my position behind the table. I could see a TV and be alone to think.

Gerbic: My GSoW editors have been talking about their past experiences with volunteering at CSICon. They tell me that you are really good at arranging so they can attend specific lectures they want to see. There also are perks, I understand, besides a special meal with Dawkins and a free Halloween Party ticket.

Romanowski: The rule I was given by Hal and Linda was that the volunteers don’t miss anything they paid for. Linda explained how close to breaking even the early TAMs were, and that they couldn’t give a discount, so we had to make sure we didn’t take away something a volunteer had paid for. We have enough volunteers that I need only about four hours per person, so it’s easy to schedule with a spreadsheet I developed to help.

We get free admission to the Halloween party at CSICon. The ticket takers for the workshops get to attend the workshop for free. They have to stay near the door during the workshop as people come and go, so it’s not the perfect experience. I really do pick those people randomly from those who want that job—I have dice. I’m not eligible though, by my own fiat. I also count a workshop as only thirty minutes of your four hours.

[To give some context, a 2017 Doctor Who convention on Long Island cost about $50 to attend. If you volunteered for a dozen hours you’d get free admission, but those hours would be during the conference and you would miss talks. The organizers would try to work around what you really want to see, but no guarantees.]

The special meal isn’t with Richard Dawkins per se. It’s a staff and volunteer dinner, and some speakers attend. I don’t remember if RD attended them all, but I remember one. There were some new volunteers and I joined them, just to talk and make sure they were included. Robyn Blumner came in and sat at the table. That wasn’t surprising because we know each other from various conferences. What was surprising was that when RD came in, he sat with the person he knew best, Robyn, so we had dinner with Richard Dawkins!

Romanowski: Yes, I could use a few more volunteers. It’s never too late to volunteer. Even if the schedule is complete and I have all I need, I always can use a few alternates in case someone has to cancel at the last minute. I can’t guarantee Richard Dawkins will sit at your table though.

Gerbic:They say that organizing skeptics is like organizing cats. I haven’t experienced that while running GSoW all these years. What do you think?

Romanowski: It’s not at all like that! All the volunteers have been motivated, punctual (which is much more important than you’d think) and devoted to getting the job done. I think we all do this for love of the “cause”—critical thinking.

Gerbic: You have attended more TAMs than I have. I’ve done ten, started at TAM 4. So, you have seen the history of modern skepticism in ways that others have not. What are more of your favorite memories?

Romanowski: I’ve attended all fourteen TAMs in the USA plus TAM Australia. 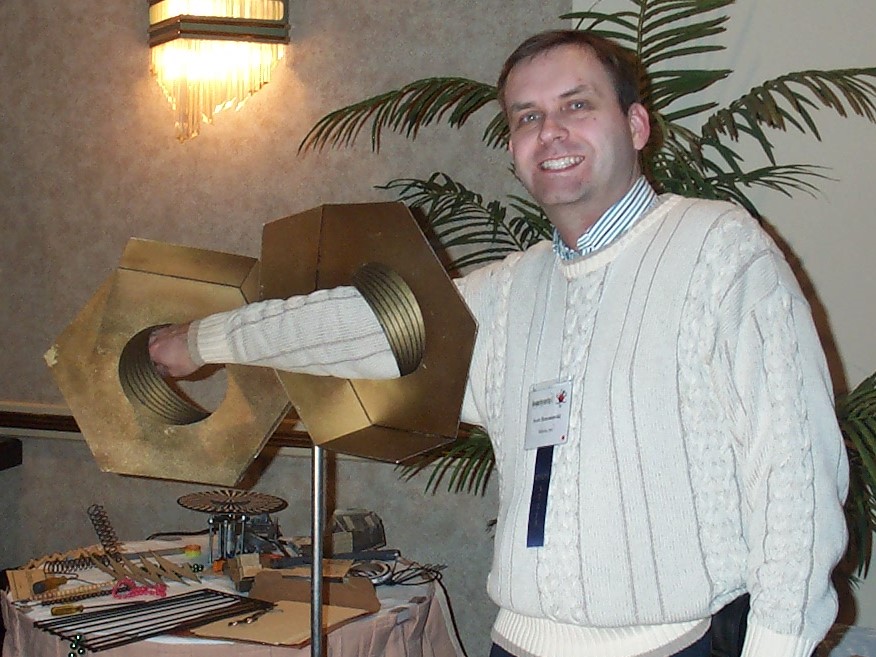 Gerbic: I didn’t attend that Star Trek dinner but heard lots of stories about it, plus there was a t-shirt if I remember correctly? Tell us all that story please?

Romanowski: I’ve forgotten who organized it. ST:TE was closing later that year, and some of us fans wanted to celebrate with one last dinner at Quark’s, their restaurant. The organizer knew that Quark’s couldn’t (wouldn’t?) give us separate checks, or even break it up by table, so we all brought cash. The total with 19 percent mandatory gratuity and tax came to $2388.66; we gave them $2400 in cash. The staff told us we were the largest cash total they’d had. As I recall, my hamburger and soda made up less than 1 percent of the total.

Someone later made t-shirts with “2388.66” on them, and I’ve got one in a box of memorabilia in my attic. Kitty Mervine made this video of the experience.

Gerbic: Do you get to watch lectures also? What have been your favorites and what are you looking forward to this year at CSICon?

Romanowski: Yes, I do get to attend the talks. All the volunteers do. I pay the normal fee, and I’m not going to shortchange myself. There are so many I remember! I enjoyed Neil deGrasse Tyson’s keynote talks, and Randi’s reminiscing about $1M Challenge tests, Phil Plait’s talk about Planet X, given after the Columbia disaster, and Ray Hyman’s Cold Reading workshop (I’m an amateur magician, but I don’t perform, so I’ll never use it).

This year I’m making sure that I attend Steven Pinker’s talk because I recently read Enlightenment Now; Susana Martinez-Conde’s and Stephen Macknik’s previous two talks and books were so interesting that I must hear what they have to say this year; and Paul Offit’s talk because I called some local radio DJs talking about people mailing chicken pox–infected lollipops. I knew the dangers of this from his books, and my call was played on the air!

Gerbic: What kinds of tips would you give brand new attendees to CSICon?

Romanowski: Socialize! The friends you make are at least as important as what you learn from the speakers.

Gerbic: Thank you so much, Scott, for speaking with me. There were lots of things I had forgotten and things I didn’t know. For anyone attending CSICon 2018, please remember there is a Halloween party (pajama theme, family friendly) and also follow the conversations and updates on the Facebook page for CSICon.