At the World Skeptics Congress in Berlin, a prominent poster display by Leo Igwe featured graphic accounts of the trials that he and many of his supporters have faced in Africa—their work to oppose the persecution and killing of children and minorities, and the failures on the part of law enforcement and religious leaders to challenge such atrocities. During the closing “Houdini Séance” on the last day of the convention, Leo stood up during the question and answer session to personally thank James Randi for being such an inspiration in the pursuit of justice in the name of skepticism and rationality. For many of us, Leo Igwe is similarly inspirational.

Leo Igwe was the Western and Southern African representative to IHEU, the International Humanist and Ethical Union. He has worked to challenge a variety of human rights violations, including anti-gay hate, sorcery, witchcraft, ritual killing, human sacrifice, “untouchability,” caste discrimination, “child witch” superstition, and anti-blasphemy laws. He is presently enrolled in a three-year research programme on “Witchcraft accusations in Africa” at the University of Bayreuth, in Germany. 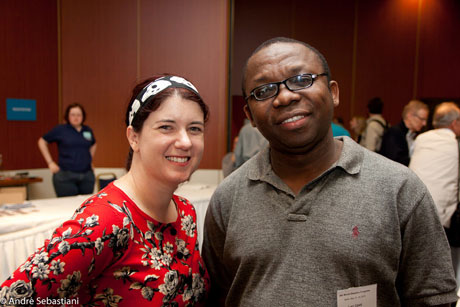 Kylie Sturgess: You’re now going to be studying in Germany, I've heard, rather than working in the field as you’ve done in the past?

Igwe: Yes, I'm doing a research program here on witchcraft accusation in Africa, and I took on the program because it also resonates with skepticism and rationality.

Sturgess: I've been admiring your poster display at the convention, which I think has been getting a lot of attention. Can you tell us about that?

Igwe: Well, the posters at the Berlin Congress are just all about the challenges we're facing in Africa. They're enormous. A lot of work has been done in Europe, in Australia, in America, but not much has been done in Africa. So the posters are there to let international participants understand the challenges we are facing in the area of witchcraft accusation.

They’re about the role churches are playing, where there are the witch doctors; pastors are the modernday, if I can use that word, witch doctors in Africa. I look at the part that Islam and Christianity are playing—they reinforce superstitions in the modern day, and are not addressing them. Incidentally, Christianity, maybe because it was brought by Europeans, it’s considered to be civilized. At the end of it all, I see them as another form of superstition, and it is not helping our efforts to promote reason, science, and critical thinking in Africa.

We also have, of course, traditional superstitious beliefs that have nothing to do with Christianity. They have a lot to do in terms of being also on the same irrational platform, like ritual killinghuman sacrifice—which many people don't want to talk about—but that's exactly what we’re facing. People honestly think there are agents somewhere who can be appeased by sacrifices—the killing of something, an animal or even a person. We also have the problem of persecution of albinos, particularly in East Africa. We have persecution of children, sacrifices of children in Uganda, Nigeria, and Swaziland, and all of that. But the fact there is that there are no rational voices; even though there are people who are rationally minded, they are not speaking out. This is because sometimes they are afraid—maybe, they might think there could be some supernatural backfiring or retribution—they just don't want to tamper with those things.

That is why I say a skeptic conference is a safe space: where we can speak out, where friends will understand the kinds of challenges we are facing, and where we can also mobilize and see what we can do to address these problems.

Sturgess: In terms of activism and being on the front line, you are, possibly, one of the most amazing role models out there. What advice do you have for people? You have faced not only political backlash, death-threats, the police …

Igwe: Yes, see, the thing is when one is driven by conviction, when you are driven by what’s good for society, that’s the first important thing. Number two, I'm not using any illegal or let's say, violent methods. I'm not going out there to say, or be like people who are killing doctors who are performing abortions, no. I believe in dialogue. I believe in debate. I believe in persuasion, and all that. Those are my methods.

I'm driven by the conviction that what we do is for the good. I have read history, and I have found out that what I'm doing: the wars that we are fighting in Africa, have been fought in other places—and won. The fact is history is on my side and civilized values are on my side; I'm using civilized methods. So, why can I not face anything?

I know that if people today are attacking me, they will get to learn this and they will have to establish a treaty. Like those who invaded our [Calabar anti-witchcraft conference in 2009] venue—they thought that they could, that violence was on their side, they thought that corruption and the police forces were on their side. I must tell you, they soon ran out of luck!

That’s just to give you a typical example. I know that the forces of irrationalism are at a retreat if you put up a strong opposition. If you put up a strong campaign, they will retreat. I am not interested in the pace of the retreat, and I'm not interested in living to see them disappear completely! But I know I'm deeply convinced that at the end of it all, civilized values, rationality, compassion formed by reason, science, and critical thinking will triumph.

Sturgess: They’re not going to stop the mission that drives you.

Igwe: Yes. Of course, is also encouraging to know there are friends out there. Since I came to this conference, new people have become fascinated by what I'm doing, and I'm so happy. It's not just about my personal drive. It's also about the encouragement and motivation you get from friends, people come around and they talk and say “Ah, Leo, I know what you’ve been doing.”

I have this very strong conviction that even if everyone who lives in my country or on the continent turns against me, I can still look them in their faces and say, "Look, you are wrong—I'm not going to be confrontational but I will make all efforts to present my ideas to you.” Of course, today we have Internet, there are so many ways of registering your positions without necessarily going off to face danger and challenge them in person. In fact, [because of the Internet] my friends in Australia do know about things, before my parents in my village do!

Igwe: Yes, because they have the Internet! My parents have a telephone and I have to call them, but sometimes the information that I'm arrested gets to Australia before my own parents get to know that I'm arrested! You really cannot believe it! Can you see the new world I'm walking in? So, I don't just depend on the traditional institutions of solidarity; I see that the institutions of solidarity are enhanced by communication technology.

Overall, I know that we will keep making progress. Still I stay. We'll keep chipping away, the rock of ignorance, the rock of superstition and like they say here in Germany, they say that constant water drops crush the rock.

We're going to keep dropping that water—I don't know the pace of it, but we must keep it going until the rock of superstitions crack and turn it into a road, that paves the way for science and rationality.