A special thanks to Mike Skor, who lent advice on light meters and testing methodology.

The applicant has requested to remain anonymous, so he will be referred to here as “Subject.” He arrived exactly at the agreed time on the day of the demonstration.

The Subject first applied to the IIG $100,000 Challenge in November 2013, stating that he had a variety of paranormal powers, including telepathy, telekinesis, and the ability to influence the weather. As IIG did not have any affiliates or representatives near his then place of residence, discussions with him ended after a couple weeks. He contacted IIG again in February and March 2014 stating that he could do telepathy and pass Zener card ESP tests.

The application resulting in this demonstration was submitted on October 11, 2016. Subject was by this time living in Oklahoma. IIG therefore approached Dr. Farha about potentially administering a demonstration. He agreed, and so with a local director available, IIG proceeded with protocol negotiations. IIG conducted a preliminary trial run of the testing methodology at the monthly IIG meeting in Los Angeles on February 18, 2017.

The Subject claimed to be able to change the luminosity (brightness) of a light bulb using only psychic ability.

In his application, he stated that he had “been meditating for some time now” and was able to “influence electricity with [his] mind.” He stated that he would hold a plugged-in light bulb in his hand and “focus on” it, which would cause the bulb to “suddenly” begin increasing and decreasing in brightness. He sent us two videos he had made of this. In one video, the bulb is held in the Subject’s hands. Most IIG members who viewed the video reported that they could not discern any visible change in brightness. Some members suggested that the camera used by the applicant might be automatically correcting for small fluctuations. In the second, longer video, a bulb that appears to have a stained-glass–like surface is resting on its side, with the applicant’s hand held directly above it. In this video, what subjectively appear to be momentary changes in brightness do occur.

The demonstration was conducted using a frosted-glass incandescent light bulb mounted on a tripod. A large white card was hung on the wall behind the bulb to serve as a bounce board for the light. A Sekonic L-758 light meter, also mounted on a tripod, was trained on the bounce board. The meter was set in spot meter mode and to give a reading of brightness in exposure value (EV) settings. Two cameras were set up: one recording the overall scene in the room and one recording the display of the meter.

An important control measure was the use of an uninterruptable power supply (UPS) to minimize electrical fluctuations not due to alleged psychic ability. Similarly, an incandescent bulb was used because fluorescent and LED bulbs contain electronic components that could hypothetically cause minor fluctuations in brightness. A frosted glass bulb and bounce board were used to “even out” the light emitted by the bulb.

Other control measures included Subject not having any metal devices, magnets, or reflective or “glow in the dark” clothing on his person that could influence the meter reading. Prior to the demonstration, he was asked to empty his pockets and remove his belt and was checked using a handheld metal detector. 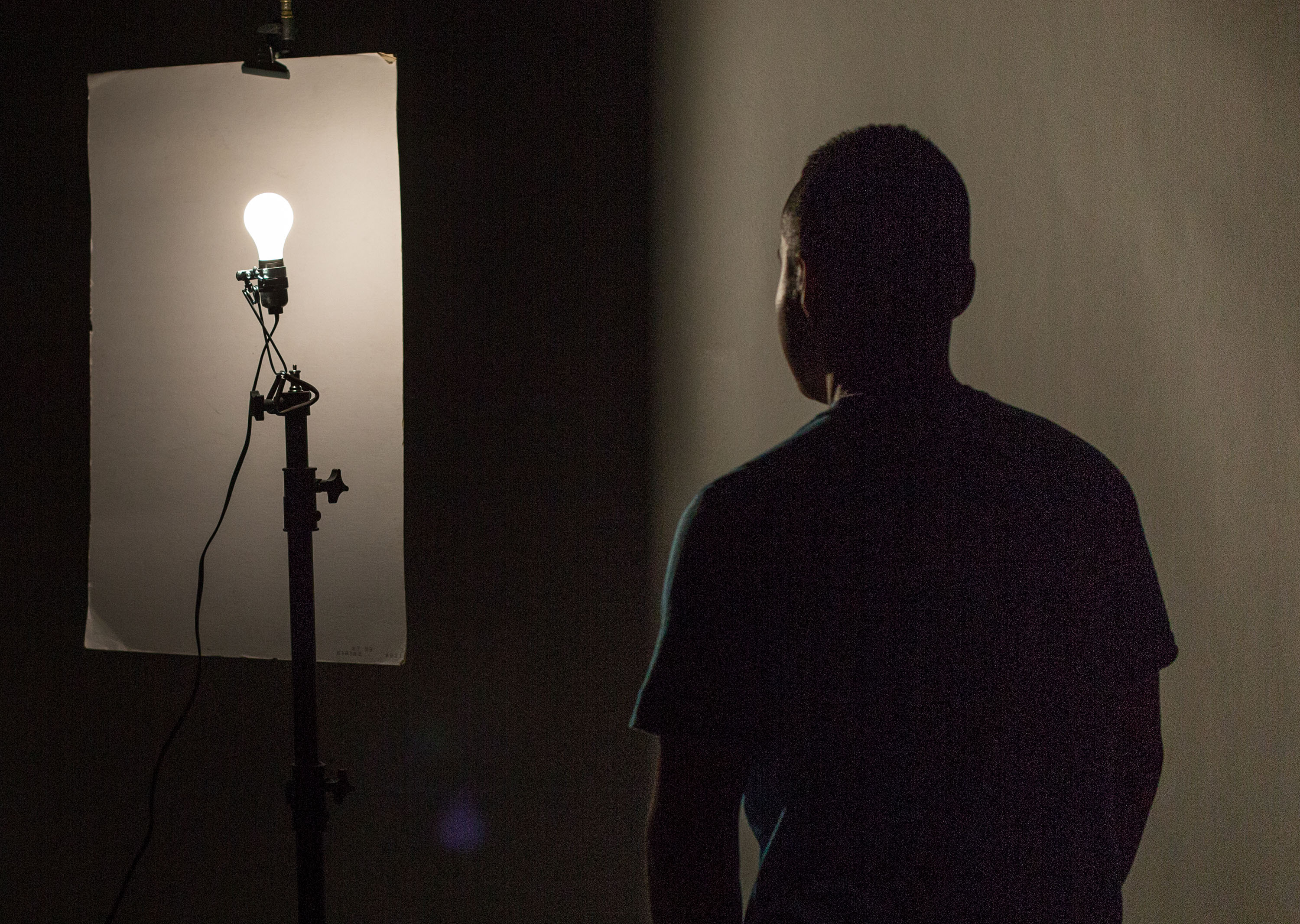 All artificial light sources in the room other than the test bulb were turned off or covered during the demonstration. All windows, doorways, etc., were closed/covered to minimize intrusion of outside light.

The pre-demonstration began with a ten-minute control period to check the baseline level of variation in the meter’s output. The meter remained on a reading of 11.2 EV throughout the control period.

Before each trial, Subject had a maximum of two minutes to declare if he was going to increase or decrease the light bulb’s brightness. The trial would be counted as a success if the meter’s reading changed by at least 3 EV and remained that far from the baseline value for at least three seconds. Because EV is a base-2 logarithmic scale, this would mean an eightfold increase or decrease in brightness. This was explained to the applicant beforehand; he indicated in writing that he understood this and accepted it as the standard for success.

Subject would need to succeed on ten of fifteen trials to pass the demonstration. Each trial was two minutes long. If Subject passed the demonstration, he would become eligible for a full test for the $100,000 prize money.

Each trial was executed smoothly, with Subject not complaining about anything. He seemed to be concentrating pretty hard. Recall the pre-demonstration “control” meter reading was 11.2. On each trial, the baseline reading was either 11.1 or 11.2 (or steadily fluctuating between the two). On the first six trials, the meter reading never changed from 11.1 or 11.2, ending the demonstration (since it became mathematically impossible to achieve ten successes with nine trials remaining). Subject did not achieve the ±3 needed on any trial.

Subject not only did not achieve the necessary ±3 change needed to succeed in the demonstration, but he also did not influence the luminosity of the light bulb in the slightest. Even if the standard had been ±1, Subject would not have succeeded. There is no evidence from this demonstration that Subject possesses psychic ability.

He seemed understandably disappointed that he would not be advancing to the full-scale test—giving him a chance at the $100,000 prize—but Subject said he would likely reapply after the required one-year waiting period.

After the end of the demonstration, Dr. Farha asked Subject if he has been able to successfully manipulate the brightness of a bulb at home. He replied:

“Whenever I’m just, like, driving around […] when there’s a light, like, flickering […] just focus on it, and it just happens.”

Here, he described essentially the same thing that has been referred to as the street light interference phenomenon: the claimed ability of certain individuals to manipulate the brightness of street lights or switch them on or off. IIG has received other applications to the Challenge from individuals claiming to have this ability and similar ones. It seems likely that the belief in such an ability often arises through confirmation bias: a person notices and recalls occasions when they were thinking about a light changing and it did change, but they do not notice or remember cases where the light did not change. They may thus come to believe that their thoughts caused the change.

A special thanks to Mike Skor who lent advice on light meters and testing methodology.