An Interview with Professor Daniel Simons and Christopher Chabris

Professor Daniel Simons and
Christopher Chabris have released The Invisible Gorilla and Other
Ways Our Intuitions Deceive Us, a book about their ten years of
research on why people succumb to everyday illusions and what they can
do to inoculate themselves against the effects of these illusions.

The book details Chabris and
Simons’s original experiments and how their results might explain
why companies spend billions on products they know will fail, why award-winning
movies are full of editing mistakes, and other behaviors caused by everyday
illusions. They combine the work of other researchers with their own
findings on attention, perception, memory, and reasoning to reveal how
faulty intuitions often get us into trouble. 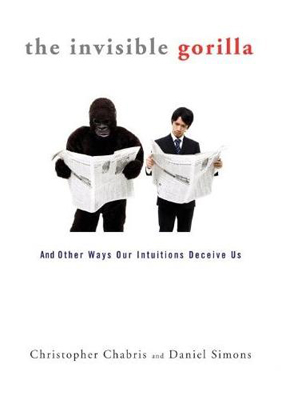 Kylie Sturgess:
What are the origins of the experiment [in your 1999 article
in Perception], “Gorillas
in Our Midst: Sustained Inattentional Blindness for Dynamic Events”? It’s been around for nearly a decade
now; it must have been quite a journey.

Daniel Simons: It has
been! When we first did the study, it was originally intended to be
a replication and an extension of a much earlier study [from the 1970s]
by our colleague Ulrich Neisser. It was just a study of attention and
perception; since then it’s kind of taken on a life of its own that
we never anticipated. So, the original study was one that we did about
a dozen years ago—we were both at Harvard—[for] a class I was a
teaching assistant for, an undergraduate math class [in which] we decided
to do a class project and create the study.

The study was fairly simple;
we had people watch a video in which people were watching basketballs.
And all you had to do was … count how many times the players wearing
white passed the ball. We made it harder because sometimes they faked
passes and they moved around. There were also three people wearing black
shirts passing their own ball, and you were just supposed to count the
passes by the players wearing white, so it’s a selective attention
task.

About twenty or thirty seconds
into the task, we had a person in a full-body gorilla suit walk into
the scene, get to the middle of the scene, turn and face the camera,
thump her chest, and walk off to the other side with a total [appearance
time] of about nine seconds. What we find is that half the people trying
to count the passes by the players wearing white—fully half of them—don’t
see the gorilla at all and are shocked when we show [the footage] to
them [again].

Sturgess:
The move from the laboratory to real-world applications is the focus
of The Invisible Gorilla. What have been some of the important
findings that have resulted from this?

Simons: Well, I think
that the starting point of the book is the gorilla experiment. The broader
theme that we’re addressing is the many ways in which our intuition
about our minds is wrong. So the thing that is interesting about the
gorilla study is not just that people fail to see a person in a gorilla
suit, which although interesting is not the really critical thing! The
really critical thing is that people fully expect that they would [see
the gorilla]—and that’s because we have a mistaken idea about the
way our mind works. We have what we call the “illusion of attention.”
We think we notice and will notice anything important that will happen
right in front of us. But the reality is that we’re aware of a far
smaller subset of our world than we think. That illusion, as we’ve
discussed it more and more over the years, applies to a lot of our cognitive
processes, a lot about how our mind works. It’s not just about attention
and perception; it’s about how we think and reason and remember and
anticipate. So, the book is much more broadly about how we think about
our own minds in general, not just about perception and attention.

Sturgess: I was particularly
impressed by Chapter Five in The Invisible Gorilla, where you
looked at vaccinations and the vaccination myths that are out there.
What led you to tackle this issue? … I was really surprised to find
it [in the book].

Christopher Chabris:
I’ll start with that. In the book we sort of progress from perception—we
talk about what we pay attention to and what we notice—into memory.
And then from memory, [we progress] into questions of confidence, which
is sort of a natural connection. We have different levels of confidence
in our memories; we’re certain of our memories when they’re really
not accurate. And from there, we sort of moved into the direction of
“well, what about our confidence about what we know, and where do
those beliefs come from?” The illusion that you’re talking about
here is called “the illusion of cause.” It’s the illusion that
we understand what causes what in the world. In fact, we’re drawing
that conclusion from evidence that doesn’t support that conclusion,
that something is causing another thing.

For example: if two things
only happen to occur together, there’s an association between them:
“Kids who watch more television are more aggressive.” Well, it’s
natural to assume that watching more television made them more aggressive.
But it could equally go the other way: it could be that kids who are
more aggressive are more likely to watch television. Or there could
be some third factor that causes both of them: maybe their parents don’t
pay much attention to them, so the kids watch TV and go out and are
aggressive; you could create an infinite number of explanations. But
our minds for some reason like to jump to the causal conclusion. That
one must be causing the second one.

In fact, it can be even easier
[than that]. We don’t even need the kind of statistical data like
TV and aggression! We just need one good story, for example, one’s
personal experience [of] having their child … vaccinated for measles,
for example (or any one of the childhood vaccinations, but measles tends
to be focused on) and then [the child] be[ing] diagnosed with autism,
unfortunately, shortly after that. Those two things might be connected
closely in time (say the vaccination preceded the diagnosis) and—this
is crucially important—there has to be some sort of plausible reason
or some belief that would let you connect those two things. So, “Vaccination
involves injecting strange, foreign subjects into the body, and autism
is a noticeable change in behavior.”

So you can see how those things
might inform the belief that one causes the other. And being told later
that people have done studies, with hundreds of thousands of subjects,
finding that there is no difference in the rate of autism between people
who have been vaccinated and people who haven’t been vaccinated …
can have very little effect on the causal belief you’ve formed, based
on the vivid story of personal experience. And that’s the illusion
we’re talking about in that chapter, this illusion of cause—believing
that you’ve detected that one thing causes another when in fact all
you’ve got is that one thing came before another one or that one thing
happens in the presence of the other, but there’s no causal relationship.

Simons: Let me just
amplify one thing about this: we’re not saying that people who do
this are in any way dumber or less educated or less intelligent…

Simons: … in comparison
to anyone else. This is just what all of us do naturally; we reason
based on anecdotes and stories and examples. And it’s very hard to
reason based on statistics; it’s not something we do naturally, any
of us—even scientists. So, if you look at the people who are the proponents
of this link between vaccines and autism, at least in the United States,
on average they are better educated than the general public, and they’re
higher income [earners] than the general public. So, these are not people
who are lacking in education or resources. It’s something we do very
naturally because we accumulate anecdotes really well, and in many ways
it’s a lot like accumulating this belief that you’ll always notice
unexpected things because you’re only aware of the [situations in
which] you noticed [them].

In the case of vaccines and
autism, the only cases that get reported are the ones where people think
there is a link. The anecdotes are: “My kid got vaccinated and now
[he has] autism.” It doesn’t get reported: “My kid got vaccinated
and he didn’t get autism!” because that’s not newsworthy.
So, we don’t accumulate those numbers we would need in our minds,
those anecdotes in our mind that would give us the right pattern. Instead,
we accumulate the ones that get publicized, and that leads to the wrong
pattern. It happens very naturally: we accumulate anecdotes, and when
we do that, we give a lot more weight to them than we probably should.

The book
The Invisible Gorilla and Other Ways Our Intuitions Deceive Us (http://www.theinvisiblegorilla.com) is available world
wide.