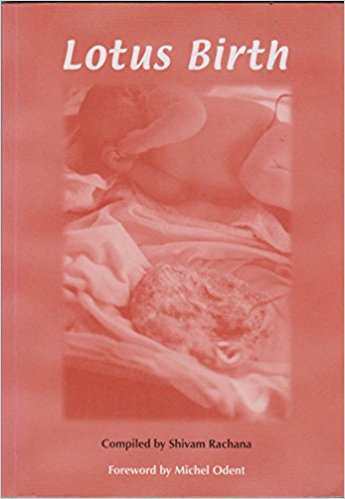 Known in proponent circles as “lotus birth,” umbilical nonseverance is a practice in which the umbilical cord is not cut post-birth, leaving the baby attached to the placenta until the cord dries and eventually detaches from the navel—usually a period of three to ten days. Little information has been published on the safety or medical benefit of this practice. Those engaging in lotus birth often keep the placenta in a pouch or a bowl to dry, with salt and optional dried herbs and essentials oils to aid in the drying process and to mask the odor of the decomposing placenta. These supplies are sold in kits from local sellers or through online shops like Etsy, though lotus birthers also share tips on how to prepare concoctions at home. Some proponents distinguish between “full” and “short term” lotus births, in which the cord is cut four to forty-eight hours following birth.

Considered a recent alternative birth phenomenon, the roots of lotus birth as currently practiced can be traced just a few decades back. With a vague but unconfirmed notion that some non-human primates don’t sever the umbilical cord, a pregnant woman named Clair Lotus Day from California began to question routine cutting of the cord back in the 1970s. Australian doctor and lotus birth proponent Sarah Buckley writes that Day’s “searching led her to an obstetrician who was sympathetic to her wishes and her son Trimurti was born in hospital and taken home with his cord uncut” (Buckley 2009, 40). The practice has been growing since 1974, with the late yoga master and midwife Jeannine Parvati Baker credited with popularizing lotus birth in the United States and midwife Shivam Rachana, founder of the International College of Spiritual Midwifery and author of the book Lotus Birth (2000), spreading the practice in Australia.

The “prolonged contact” with the placenta that a lotus birth provides “can be seen as a time of transition, allowing the baby to slowly and gently release their attachment to the mother’s body,” writes Buckley.

Placenta rituals among Australian home birthing women have been described as use of the organ “in various rituals and ceremonies to spiritualize an aspect of birth that is usually overlooked,” including lotus birth, burial of the placenta beneath a specifically chosen plant, and consuming the placenta (placentophagy) (Burns 2014).

Prevalence of lotus birth around the world is unclear. Buckley writes that “since 1974, many babies have been born this way, including babies born at home and in hospital, on land and in water, and even by caesarean section” (Buckley 2009, 41). Lotus birth remains rare in hospital settings. The practice appears to be more common in out of hospital births, with discussions and advice-sharing on lotus birth in parenting forums on Facebook and WhatToExpect.com. A search of Facebook as of publication turns up a few active discussion groups, including “Lotus Birth/Umbilical Non-severance” with over 600 members, “Lotus Birthing” with over 400 members, and Italy-based forum “LOTUS BIRTH ITALIA” with over 2,000 members. Members of these forums share advice, anecdotes, and photos.

Mention of lotus birth in the medical literature is sparse, though case studies have been documented from the 1970s on. Proponents tend to hold the placenta in high regard, wishing to honor the organ, citing both abstract and specific benefits.

“We need to relearn what a birth can be like when it is not disturbed by the cultural milieu. We need a reference point from which we should try not to deviate too much. Lotus Birth is such a reference point,” writes Dr. Michel Odent, surgeon and proponent of lotus birth and other risky feats like water birth, dubbed the “French birthing guru,” in the foreword to the 2001 book Lotus Birth.

“I notice an integrity and self-possession with my lotus-born children, and I believe that lovingness, cohesion, attunement to Mother Nature, and trust and respect for the natural order have all been imprinted on our family by our honouring of the placenta, the Tree of Life” (Buckley 2009, 43).

“The placenta is placed at the same level with the baby to ensure the blood transfer. An extra 80-100mL of the oxygenated blood can contribute towards their brain development within the first year.” There is evidence in favor of delaying cord clamping, though there are gaps in the existing evidence regarding “the optimal time to clamp the cord and the interventions that should be performed before clamping in infants who fail to establish spontaneous respirations or are severely asphyxiated, as well as those who breathe spontaneously” (Niermeyer 2015).

The Royal College of Obstetricians & Gynaecologists issued a statement acknowledging that “(RCOG) is aware that a small number of women are choosing umbilical non-severance, or “lotus birth,” and stressing that “the practice of lotus birth is new to the UK and there is a lack of research regarding its safety” (Royal College of Obstetricians & Gynaecologists 2008). In the statement, Dr Patrick O’Brien, RCOG spokesperson, said: “If left for a period of time after the birth, there is a risk of infection in the placenta which can consequently spread to the baby. The placenta is particularly prone to infection as it contains blood. Within a short time after birth, once the umbilical cord has stopped pulsating, the placenta has no circulation and is essentially dead tissue.” RCOG published a scientific impact paper reviewing the body of evidence suggesting that deferred rather than immediate clamping may have benefits at both term and preterm births (Royal College of Obstetricians & Gynaecologists 2015).

Though lotus birth is not well-documented as a practice in medical literature, negative health outcomes have been documented, including infection and idiopathic neonatal hepatitis (Tricarico et al. 2017). Lotus birthing also requires the primary caregiver—almost always the mother—to remain close to a bag of decomposing flesh, and it keeps her homebound as she cares for the newborn until the umbilical cord detaches.

Dubbing it “the wackiest childbirth practice ever,” Dr. Amy Tuteur, a vocal critic of the natural childbirth movement, describes lotus birth as “a bizarre practice with no medical benefit and considerable risk, particularly the risk of massive infection.” She explains the phenomenon: “What’s the real reason behind lotus birth? Homebirth and other fringe birth advocates are engaged in a battle of oneupsmanship, and the woman with the most bizarre (and often the most dangerous) birth practices wins” (Tuteur 2012).

Dr. Jennifer Gunter, Canadian-American gynecologist, obstetrician, vaginal health expert, and author, writes in her blog that lotus birth is “biologically unsound [and] untested,” adding that it is “the equivalent of diapering up a raw steak and attaching to your newborn for three to five days. It is not a magical, historical or cultural practice forcibly torn away from women by an uncaring patriarchy; it was something a woman dreamed up after hearing about chimpanzees. To brand this as a modern ritual is nothing but predatory marketing” (Gunter 2017).

Dr. Kristina Bryant, a pediatrician specializing in infectious diseases, suspects that peer pressure to choose the most natural birth options plays a role in the proliferation of lotus birth. She writes that “many pediatricians, me included, are not well informed about these practices and don’t routinely ask expectant moms about their plans. I propose that we can advocate for our patients-to-be by learning about these practices so that we can engage in an honest, respectful discussion about potential risks and benefits. For me, for now, the risks outweigh the benefits” (Bryant 2017).

Lotus birth is poorly studied, and experts largely agree that this is for good reason—there is no need to legitimize a high-risk, no-benefit phenomenon that didn’t start until the 1970s. Nevertheless, awareness of lotus birth, the reasons proponents cite for doing it, and management of those who choose it, should be on the radars of medical practitioners. Along with refusal of other newborn nursery protocols, including refusal of intramuscular vitamin K, erythromycin eye ointment, newborn screening for congenital conditions, hepatitis B vaccination, discharge timing, and recommended sleep position, “providers need to be aware of alternative practices and know how to respond to them with patient-centered yet medically safe care” (Monroe et al. 2018).

Kavin is an author and public speaker covering science, health, medicine, agriculture, food, parenting and their intersection. Her work appears regularly at Forbes, SELF Magazine, Slate, and more. Her chapter in the recent MIT Press book “Pseudoscience” is entitled “Swaying Pseudoscience - The Inoculation Effect.” When she’s not writing and tweeting, she’s busy being a “Science Mom”—also the name of a recent documentary film in which she’s featured—to a 7-year-old and 5-year-old.

“Woo Watch” with Kavin Senapathy explores the claims and claimants in the alternative health, clean food, and spurious parenting worlds, and examines the institutions and personalities driving these movements. Spanning the infuriating, heartbreaking, and just plain mind-boggling, the column will take a fresh look at old school woo, and keep an eye on the newest spurious health trends.

Other Articles from Woo Watch

The Overblown Breast is Best Mantra

Pseudoscience Trends in the Pet World