The first in a hopefully fun and informative series of columns, I want to kick-off Reductio ad Absurdum with a look at so-called
“magnetic people.” As will be the case for all the columns, never mind that there is no evidence for these gaussy guys and gals, what would the world
be like if people really did generate a noticeable or even intense magnetic field? 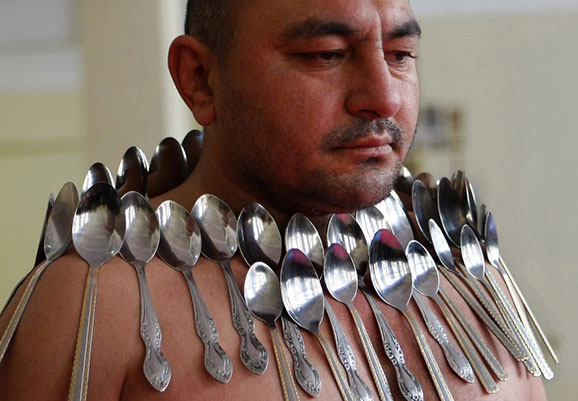 Strip club patrons would get quite a show, more so than usual, if people really were magnetic.

Amid the dollar bills and drunk-at-noon businessmen, a magnetic stripper, if she spun fast enough around the poll, would melt it. At the very least she
would shock herself before shocking the crowd. When a conductor like metal meets a changing magnetic field, the magic of reality induces an electric
current in it. Flip-flop this current around enough, and the metal heats up to the point of melting.

If people really were magnetic, they would be terrible navigators. Taking to their smart phones and computers, their screens would blur out and become
unusable. Going back to the old methods, a compass wouldn’t help much either. It would be more likely to find you than Earth’s magnetic north.

Like all interesting human qualities, magnetic people would have a range of field strengths. Perhaps there would even be schools and universities dedicated
to harnessing or improving your output. In any case, the strength of the field matters quite a bit. It’s the difference between being a glorified
refrigerator magnet and being able to free fall down a metal tube without dying.

Magnetic people with the strength of refrigerator magnets would produce a field 100 times stronger than the Earth’s. But if any fortunate “Magnetos”
existed, perhaps with MRI-like output, they would have one million times the field strength of Earth. For the refrigerator-strength people, you
wouldn’t have to change much. But a public warning would have to go out whenever those Magnetos were about. Entire houses, entire cities, would have to be
shielded; all metal objects not tied down turn into deadly projectiles. In fact, a rogue oxygen tank once proved this danger, killing a patient during an
MRI scan after rocketing across the room, drawn by the monstrous amount of teslas. (You can see the incident re-created here.) And at this strength, you better avoid your friend’s stack of old floppy disks and unshielded hard drives, as you could shuffle their bits into blurry oblivion.

But it wouldn’t be all bad. Magnetic craftsmen would find that every part of their body has become a convenient tool and nail holder. Salmon fishermen
could experience a huge boom. As salmon navigate their way home according to the Earth’s magnetic
fields, a giant magnet in the form of a fisherman could disorient or even attract the fish. Magnetic lifeguards could take to the ocean as shark repellants.

Lovers might find it annoying however, as there is no telling when your poles, so to speak, would line up.

If people really were magnetic, it would eliminate the need for elevators, at least as a way down. A strong enough magnet can be dropped into a metal tube,
fighting gravity all the way, and descend slowly, impossibly, to the ground. Abandoning elevators for simple metal tubes, magnetic people working in office buildings could simply jump
into the tube, allowing their fields to slow their descent. Getting back up is another matter. Like Spiderman and his abnormally “sticky” hands, magnetic
people could just walk up the side of a metal edifice. Of course, a lot of modification would be in order, as would leg workouts.

Recreation would change for the magnetic humans. Think of the joy in frolicking around a ferrofluid-filled pool. Silly putty goes from cool to amazing in your
hands. But sticking spoons to your nose would hardly be anything to brag about.

If a kind of biological magnetism were the norm, medicine as we know it would change. Metal scalpels would be abandoned for fear of losing grip of them.
What was meant to mend would turn into a missile. Pacemakers would lose the beat as induced currents surged through the wires. Metallic implants would
shift curiously inside us. And needless to say, an MRI machine could make quite a mess.

Handrails at malls and airports the world over would not only need to be cleaned, but de-magnetized. As millions of magnetics ran their hands across the
rails, they too would become attractive. People would lose their car keys and loose change to these invisible pickpockets. However, it would make it easier
to pick up change off the street, if you could just collect it all from your feet and ankles.

All of this could be avoided with a little science. Magnetic shields—materials that draw fields into themselves, preventing magnets from interacting beyond
the shield—could eliminate many of the potential hazards. The clothing industry would have to incorporate completely foreign materials. Conventional design
structures would mold around materials like Permalloy, a metal used in shielding, instead of
polyester. Expensive at first, the booming new industry would soon drive down prices so that even the refrigerator magnet-strength people could get in on
it. Engineers would continue to find ingenious ways to weave shielding into clothing and accessories. It would be a paradigm shift in textile design—a
style revolution to follow a magnetic one.

So many things would have to change—our technology, the tools we use to operate on medical patients, our transportation systems, the way we play sports,
the way we move, even the way we kiss—in a world were opposites really do attract.

A world where human magnetism is an anomaly would be very different from one where it is the norm. A singular magnetic man, the only one of his kind, would
be a freak, for lack of a better term. Sadly, he would probably meet his end at the sharp point of some scientific scalpel. Of course, before he met his
end he would be, effectively, a superhero. He could spend his days re-creating scenes in Star Wars, pulling metal lightsabers his way. He could do
the same with Thor’s hammer, if he didn’t kill
himself with a flying pot or pan instead.

Instead of finding these amazing feats of electromagnetism, we find slightly more sticky humans whose abilities are defeated by talc powder. Science tells us what to expect, now what do
you see?

Kyle Hill is a science writer who specializes in finding the secret science in your favorite fandom. He writes for the Scientific American Blog Network at his blog, But Not Simpler. Hill also contributes to Slate, Wired, Nature Education, Popular Science, and io9. He manages Nature Education's Student Voices blog, is a contributor to Al Jazeera America’s science show TechKnow, and you can follow him on Twitter under @Sci_Phile.

Other Articles from Reductio ad Absurdum

The Feng Shui Way: A Catastrophe For City Planning