It was a quiet, uneventful week in Washington. I mean, aside from the ongoing tire fire at a fireworks factory that is the Trump presidency. When news broke that Trump had given highly sensitive intelligence to the Russians and that he had asked recently redundant FBI Chief and famed memo writer James Comey to call off the investigation into suspected foreign agent and National Security Advisor Michael Flynn, a dependent clause that one would never thought would ever have to be written, I expected wall to wall coverage about the scandal. And there has been, with the notable exception so far of conservative media, including Fox News. Instead, a number of outlets have been focusing on the early morning murder of a DNC staffer named Seth Rich last July. It seems like a random killing, and most of the reports I’ve seen suggest that it was the result of a robbery gone wrong in a part of town where there had recently been several muggings. Rich’s name was again popping up in my conspiracy theory feeds, and it was clear he was back on the radar. Nonetheless, I was shocked when I tuned into a PBS audio feed of an off-camera press gaggle May 16, where I heard what for all the world sounded like the Press Secretary of the White House talking about a DNC staffer during the week that things were exploding in the administration’s face.

I had missed the beginning of the exchange with the reporter, so I looked up the transcript of the gaggle later. Spicer called on a reporter named Ronica, and it turns out this is Ronica Cleary from a local Fox outlet, WTTG Fox 5. I usually don’t conflate Fox News and their affiliates. The scope and content of the local and national news usually are quite separate, but it had never occurred to me that things might be different in DC. 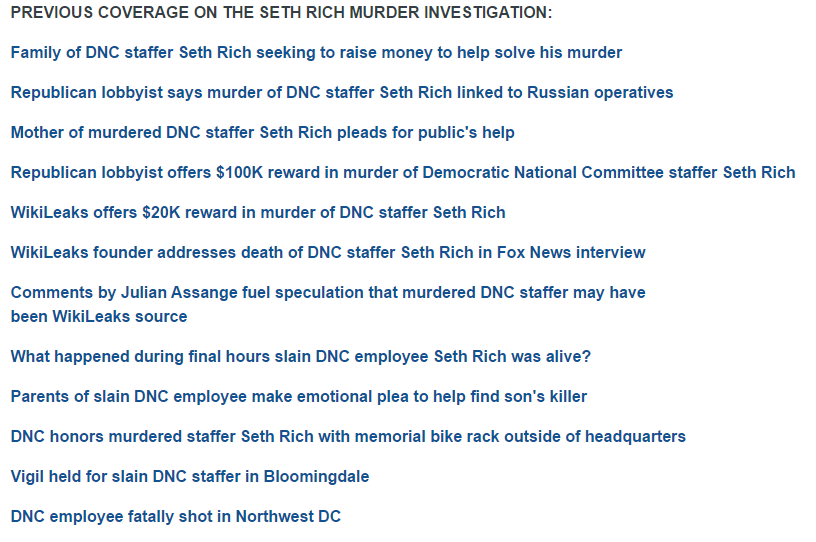 Because Rich lived in the DC area and was killed there, it makes sense that the death was covered by the local Fox affiliate, and Fox 5 has covered it extensively, but it’s also routinely covered some questionable claims relating to the murder. Nothing seems weird about the case itself, though it remains unsolved. The weirdness is in the commentary circulating around the murder. Julian Assange and possible Russian connections are mentioned in the list of previous stories. We’ll get back to that. The resurrection of the Rich story occurred on May 15 and it came from a private investigator named Rod Wheeler. Wheeler, who is also a regular Fox News guest/analyst, is described in a story on the Fox 5 web page as the Rich “Family’s Private Investigator.”

Rich was shot a few weeks before the DNC email leak at Wikileaks. Guest of London’s Ecuadorian Embassy, Julian Assange, who has proven to be a partisan in this matter (and, let’s face it, a completely heartless monster if he’s using the Rich family’s pain for cheap political points), hinted to Megyn Kelly in August of last year that Rich may have been a source of the DNC emails. Of course he never said it outright, and I think that Wikileaks’ announcement last August about a $20K reward for information about the murder was a cheap publicity stunt. No evidence has emerged that the murder was in any way related to Rich’s job or that he was a source of information sent from Wikileaks.

When the explanation of an event precedes the event, you are often looking at a conspiracy theory. In this case, the story about the shooting is another chapter in the longstanding Clinton Body Count, which is a decades-old narrative sustained by the far right that contends that if anyone connected to the Clintons ever died, it was because of the Clintons. Snopes’s excellent overview currently lists nearly fifty victims. Seth Rich worked on Hillary Clinton’s behalf during the election last year, so of course she is implicated in his murder, goes the thinking. In this variation on a well-established Clinton murder/cover-up theme, Wheeler says: “I have a source inside the police department that has looked at me straight in the eye and said, ‘Rod, we were told to stand down on this case and I can’t share any information with you.’ Now, that is highly unusual for a murder investigation, especially from a police department. Again, I don’t think it comes from the chief’s office, but I do believe there is a correlation between the mayor’s office and the DNC and that is the information that will come out [Tuesday]” (brackets in original). Well, if a hypothetical person looks you in the eye, it has to be true.

Wheeler claims that Rich’s laptop, and with it the email evidence linking Rich to Wikileaks, is curiously missing and that both the FBI and DC police claims the other agency has it. NBC looked into the case of Rich’s laptop: “A former law enforcement official with first-hand knowledge of Rich’s laptop said the claim was incorrect. ‘It never contained any e-mails related to WikiLeaks, and the FBI never had it,’ the person said.” Oops.

I contacted the DC Metropolitan Police and they replied very quickly with what is clearly a form letter (it was identical to the email sent to Snopes):

The assertions put forward by Mr. Wheeler are unfounded. The Metropolitan Police Department’s (MPD) Homicide Branch is actively investigating Mr. Rich’s murder and we continue to work with the family to bring closure to this case as we do with all homicide investigations.

The investigation by Wheeler, who once claimed on the O’Reilly Factor that gangs of lesbians were raping young girls and wreaking havoc with their pink Glocks across the country (really), is being paid for not by the family but by a third party, a financial adviser in Dallas named Ed Butowsky. Butwosky is a Fox News regular, according to NBC, and he has also written for Breitbart, the right wing propaganda outfit whose former Chief Executive sits at the right hand of President Trump. Butwosky telegraphed the release of this story last week in a tweet, but that message has since been deleted. Butwosky denied that he was even involved in the independent investigation, at least until Rich’s family went on the record about it.

It seems clear that the right wing media would rather talk about anything other than the unfolding extinction event at the White House. Butwosky and Wheeler picking on a dead kid, however, is beneath contempt.

Postscript: Fox 5 has updated their coverage of the worthless “revelations”:

On Wednesday, just before our newscast, Wheeler responded to our requests via a telephone conversation, where he now backtracks his position and Wheeler characterizes his on-the-record and on-camera statements as “miscommunication.”

When asked if Wheeler is still working for Seth Rich’s family, Wheeler told FOX 5 DC the contract still stands—ties have not been severed.

We reached out once again to the Rich family, and through a spokesperson the Rich family tells FOX 5 DC, “The family has relayed their deep disappointment with Rod Wheeler’s conduct over the last 48 hours, and is exploring legal avenues to the family.”

Post-postscript: Can you imagine having the opportunity to ask a question to the Press Secretary during such a historic week and wasting it on this?