Measles was eliminated from the United States in 2000. It could have stayed gone, but it didn’t. As of April 19, 626 cases had been reported to the CDC so far in 2019 in multiple states: Arizona, California, Colorado, Connecticut, Florida, Georgia, Illinois, Indiana, Iowa, Kentucky, Maryland, Massachusetts, Michigan, Missouri, Nevada, New Hampshire, New Jersey, New York, Oregon, Texas, Tennessee, and Washington. Measles no longer existed in this country, but thanks to air travel, cases of measles were easily imported from other countries and developed into outbreaks among the unvaccinated or poorly protected. 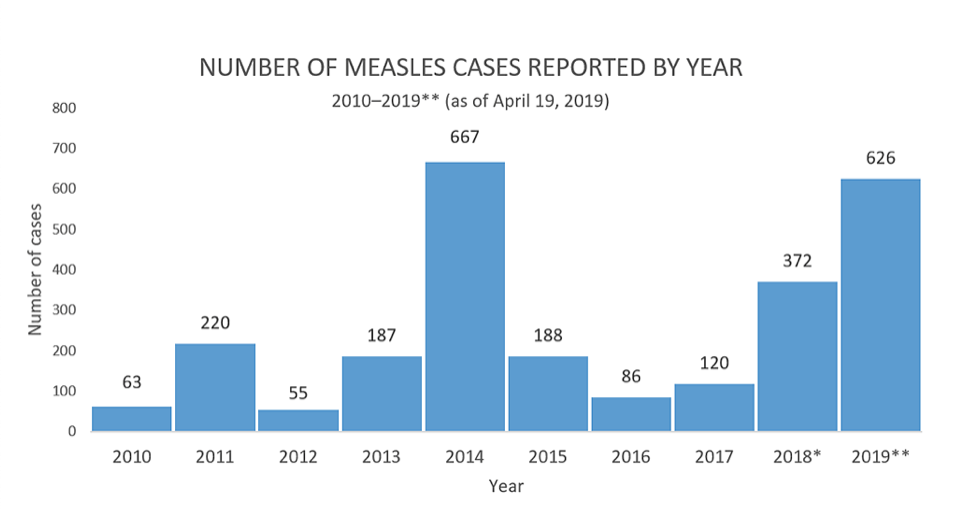 Diseases with Only Human Reservoirs

Some diseases have reservoirs in the natural world, for instance tetanus in the soil and Ebola in wild animals in Africa. Other diseases have no natural reservoirs and can only be transmitted from human to human. Those are the diseases we can reasonably hope to conquer. Smallpox once killed 400,000 people a year, but it has been completely eliminated from the globe. The last case occurred in 1977. The Americas have been polio-free since 1994; Europe has been polio-free since 2004. Cases continue to occur, but only in a few countries where people have refused vaccination due to misinformation and conspiracy theories. There is every prospect of eliminating polio from the globe soon. Measles is another good candidate for elimination: all it will take is the will and the organization to mount a concerted public health and vaccination campaign.

There is a widespread misperception that measles is a harmless childhood disease, but it is one of the leading vaccine-preventable causes of death. It killed 2.6 million people around the globe in 1980. Thanks to global vaccination programs, the death rate had dropped to 73,000 a year by 2014, but it has started to rise again due to a decrease in immunization. Complications are relatively common, including pneumonia, ear infections, seizures, blindness, and brain inflammation. A devastating late sequela, subacute sclerosing panencephalitis (SSPE) can occur anywhere from 1 month to 27 years (!) after the initial infection. The risk for babies may be as high as 1 in 609. There is no effective treatment, and it is almost always fatal.

Measles is the most highly contagious infection, transmitted by airborne particles through coughs and sneezes. It is contagious before the rash appears, before patients even realize they are sick. Nine out of ten people who are not immune and share living space with an infected person will be infected.

Three quarters of recent U.S. cases occurred in New York in ultra-Orthodox Jewish communities. A prominent rabbi announced that parents who “placate the gods of vaccination” are engaging in “child sacrifice.” Rabbis are spreading false information, saying vaccines cause autism. Authorities declared a state of emergency and instituted a $1,000 fine for unvaccinated individuals who refused to be vaccinated. In response, parents filed a lawsuit claiming interference with religious rights.

Another option is to quarantine people who have been exposed to a case of measles until they can show they have been vaccinated. Two universities in Los Angeles have instituted quarantines. Both options respect patient autonomy. Individuals can choose to accept quarantine or pay a fine: no one is holding people down and forcibly injecting them with vaccines.

There are legal precedents for mandating vaccines and implementing quarantines. Society has not only the right but the obligation to protect vulnerable people from preventable infectious diseases. Some individuals can’t be vaccinated, either because they are too young or are immunocompromised. There are legitimate reasons to grant medical exemptions, but unfortunately some unscrupulous doctors are granting them willy-nilly to please patients and get around the law. Non-medical exemptions for philosophical and religious reasons are allowed in all but three states (California, West Virginia, and Mississippi); most doctors and scientists think they should never be allowed anywhere.

If you want to blame someone, Andrew Wakefield is a good candidate. He authored a fraudulent research paper that has since been retracted, and he publicized the idea that the MMR vaccine could cause autism. The result was a significant decline in immunization rates. Extensive research has shown no link between vaccines and autism. Wakefield lost his license to practice medicine but has moved to the United States and has reinvented himself as an anti-vaccine activist. He continues to claim vaccines cause autism and he questions vaccine safety through books, films, and speaking engagements. He has done a lot of harm. After he spoke to the Somali community in Minnesota, vaccination rates dropped from 92 percent to 42 percent, and measles outbreaks ensued.

People have a lot of different reasons for refusing or delaying vaccines; those reasons are all bogus. Every one of them has been definitively refuted and countered with facts and scientific evidence—over and over. Here’s one recent example. But concerned parents are not listening.

But maybe there is hope. President Trump once discouraged vaccines, tweeting anecdotal reports that vaccines caused autism. But even he has changed his tune and is now urging parents to vaccinate their children.

Measles is bad. Vaccines are safe and effective. These outbreaks need not happen.