“You should freeze your toxins out!”

The emails were adamant. Everyone wanted me to undergo cryotherapy: step into a -260°F stall, alone and naked, for three minutes, and feel the toxins flutter away into the ether.

No thanks, I thought. I am a cold wuss. I grew up in Los Angeles, where anything below 80°F is cool and below 70°F is downright cold. Not to mention that even here in Hollywood, I am always the person to ask whether anyone has an extra sweater before we go into an air-conditioned movie theatre. I didn’t seem like a good candidate for experimental hypothermia.

Yet we got the request so many times that my curiosity grew. The frightening-sounding treatment has been on the rise the last few years, with The New York Times noting the increase in athletes who used it in 2011. Since then, companies offering the service have sprouted up, especially in Los Angeles, where alternative therapies abound. Earlier this year, The Atlantic released a video about their medical-doctor-turned-editor-in-chief trying out cryotherapy. He was willing to do it, despite the practitioner telling him that some brave partakers got frostbite. If a doctor could summon the courage, couldn’t I? With a little encouragement from my podcast host Ross, and seeing that the whole experience totaled out at three minutes, I decided to give it a shot, even though those three minutes would cost $65. 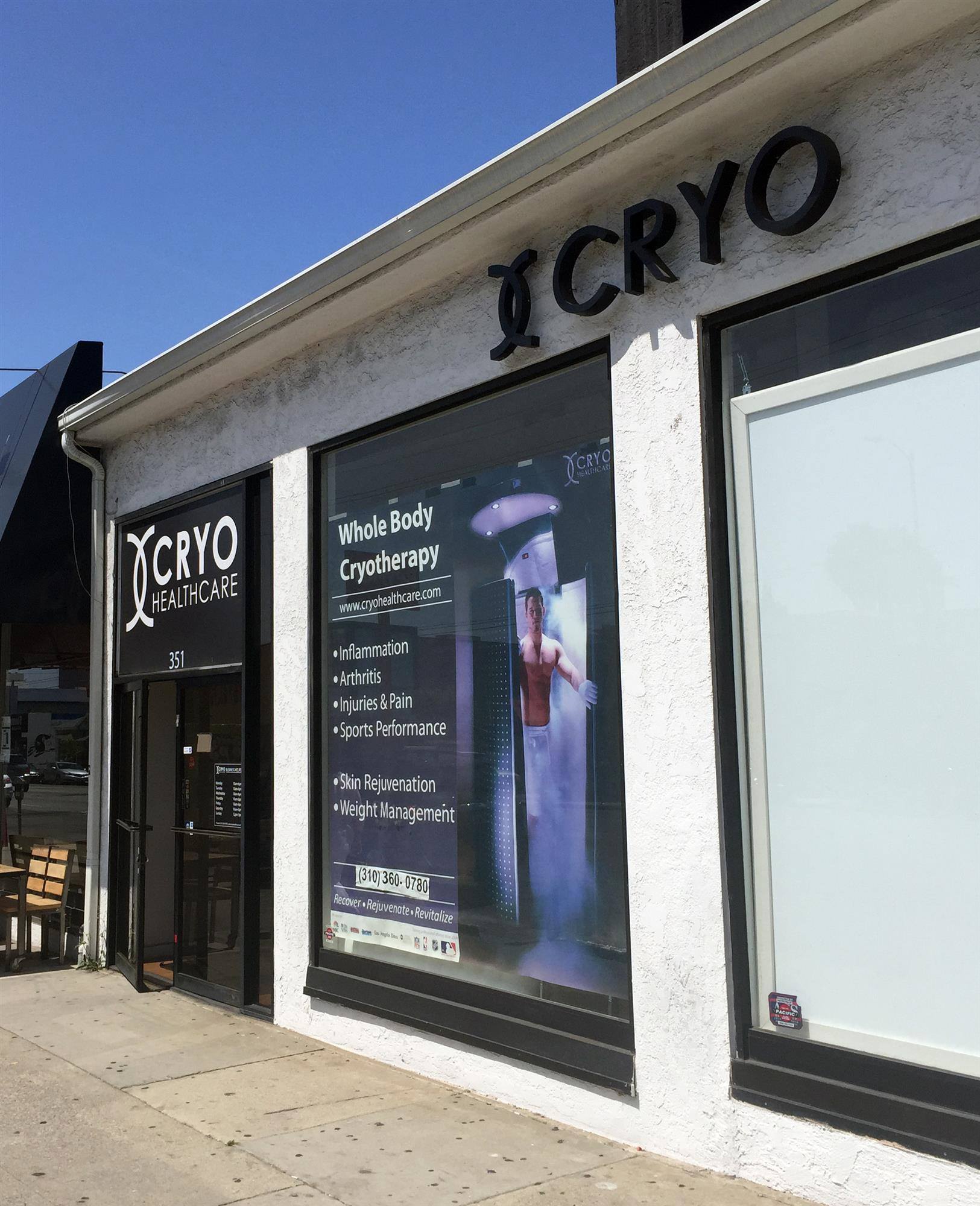 I showed up at Cryohealthcare in West Hollywood at 11 a.m. The storefront was relatively unassuming, bearing just the word “CRYO,” and one window postered with a photo of a man looking powerful and manly as he exited a cryochamber next to billowing fog. As I entered, a blonde Caucasian woman greeted me from behind the counter. She was surrounded by sleek, white, ultramodern fixtures. The entire place felt at once spa-like and dystopian, like a plastic surgeon’s office in a movie set in 2050.

“What are you here for today?” the clerk asked.

“Whole body cryotherapy,” I said, nervously. “But my friend is coming!” I added, hoping Ross’s absence would buy me a few minutes.

“Well, you can get started on the forms,” she said. The high-tech atmosphere left no room for silly things like paper and pens, so she handed me an iPad and had me read the various required warnings. I was not to do cryotherapy if I had Reynaud’s Disease (extremely low blood flow to the fingers and toes) and other conditions that would mix badly with, say, sub-zero temperatures. Claustrophobia was also a no-go, as were pacemakers and tumors.

Once Ross arrived and began filling out his own releases, a woman in all white came to take my blood pressure. The good news, she said, was that first-timers stayed in the chamber for a shorter time: men for two minutes, women for ninety seconds. Deeming me safe to freeze, she sent me into the next room, followed by Ross. 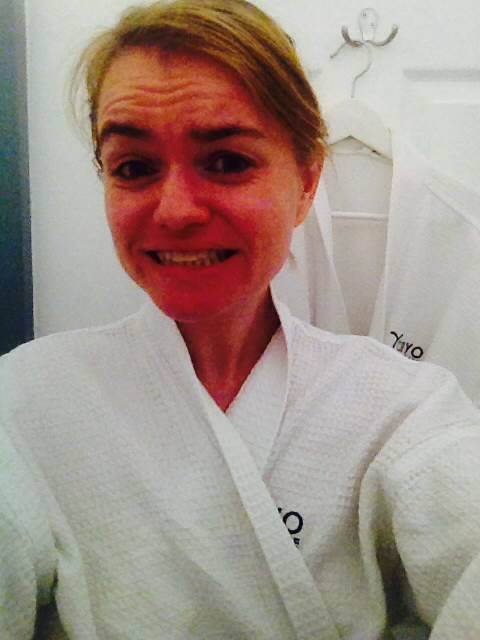 The all-white decor continued, with various Caucasian, blonde women calmly escorting guests in and out of dressing rooms. I was sent into a small changing stall and told to put on a robe and thick, knee-high socks. I was to remove everything under the robe, while Ross was told to leave his underwear on (presumably to protect, and I think this is the scientific term, his hanging junk). Inside the private stall, I took a photo of my nervous face, dreading what was to come. I hadn’t slept nearly at all the night before, and the dark circles under my eyes commingled with the fear in my eyeballs.

I got in line with Ross, watching as others entered and exited the “cryochamber.” There was only one chamber, allowing the attending staff to give their full attention to whoever was inside. Everyone ahead of us in line had gone through the procedure before, so they exchanged brief words with the woman working the machine, entered the small dressing room attached to the chamber, and once disrobed, gave a wave to the technician from a window at the top of the stall. One hundred and eighty seconds ticked down as the victim chilled inside. One by one, they exited the stall, happy and invigorated. Some went straight for the elliptical machine to warm up their muscles before returning to their cars. Others gave a quick thank-you and left. No one seemed to be reacting normally: screaming in pain as their body turned to human ice. 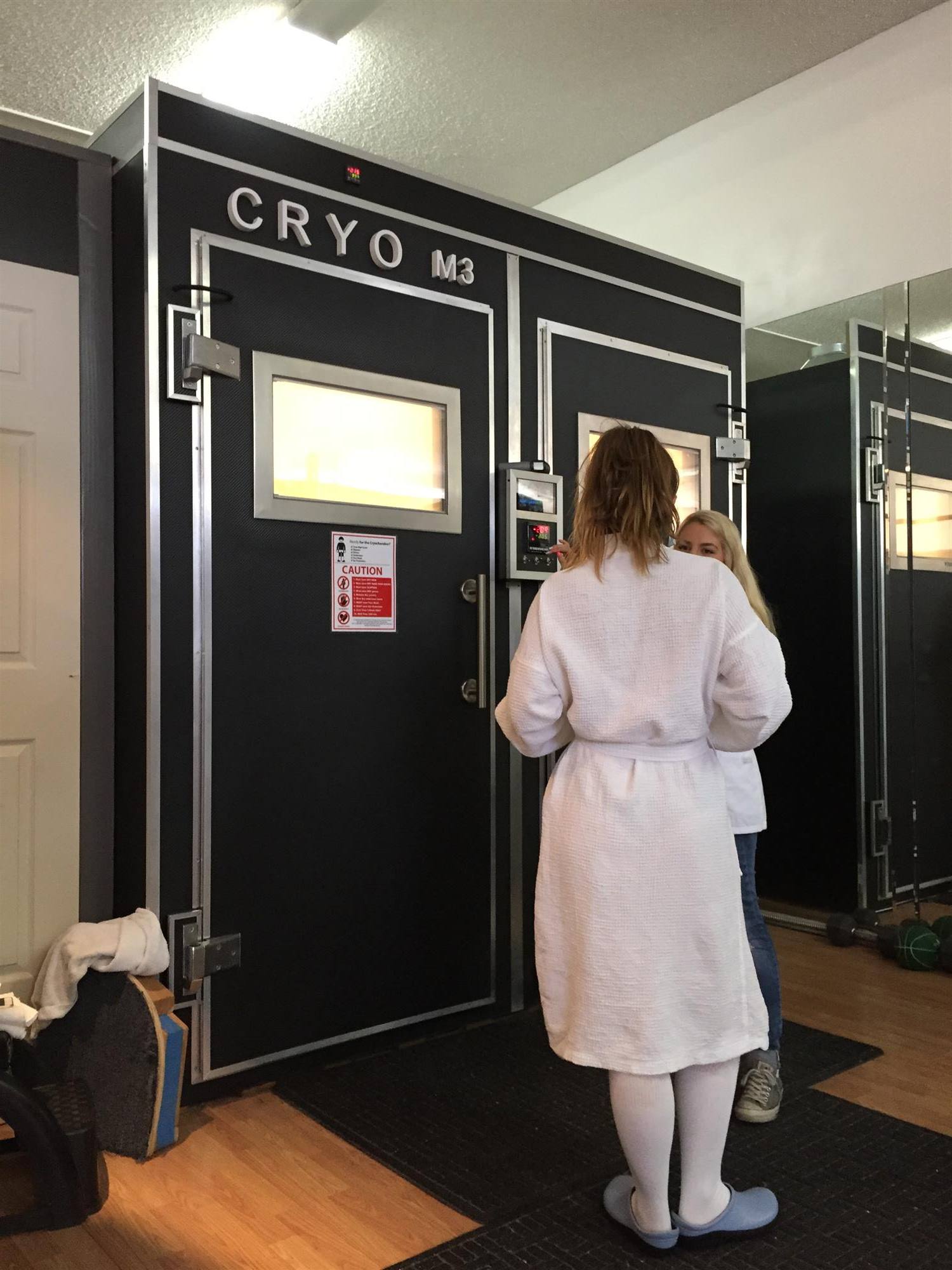 As instructed, I finished my preparations by donning a face mask, gloves, and rubber clogs. It was my turn.

“This is my first time,” I told the technician, “So just ninety seconds, right?”

I hadn’t known we could pick a song.

Something warm, I thought.

“Here Comes the Sun?” I shrugged, smiling meekly at my own joke.

“Here Comes the Sun?” I nodded, certain that she must know it. “It’s The Beatles?”

I entered the dressing room, and a massive door settled shut behind me. Even the dressing room was too cold for putting on clothes, much less taking them off. I quickly disrobed, then, urging myself to waste no time, opened the meat-locker-style door, and entered a wall of fog so thick a murderer could have been standing behind it, and I would have walked right into her arms.

For a moment, I panicked. I hadn’t given the technician the thumbs-up sign. What if she hadn’t started the timer, and I was wasting precious seconds, encased in a dry ice machine? But the music started, and I knew she had begun. A creepy rendition of “Here Comes the Sun” started playing. It was happening. I was freezing my toxins out.

With not an inch of sight in front of my face, I immediately went into survival mode, clinging to my naked breasts and covering my nipples, then hunching slightly to protect my exposed crotch. 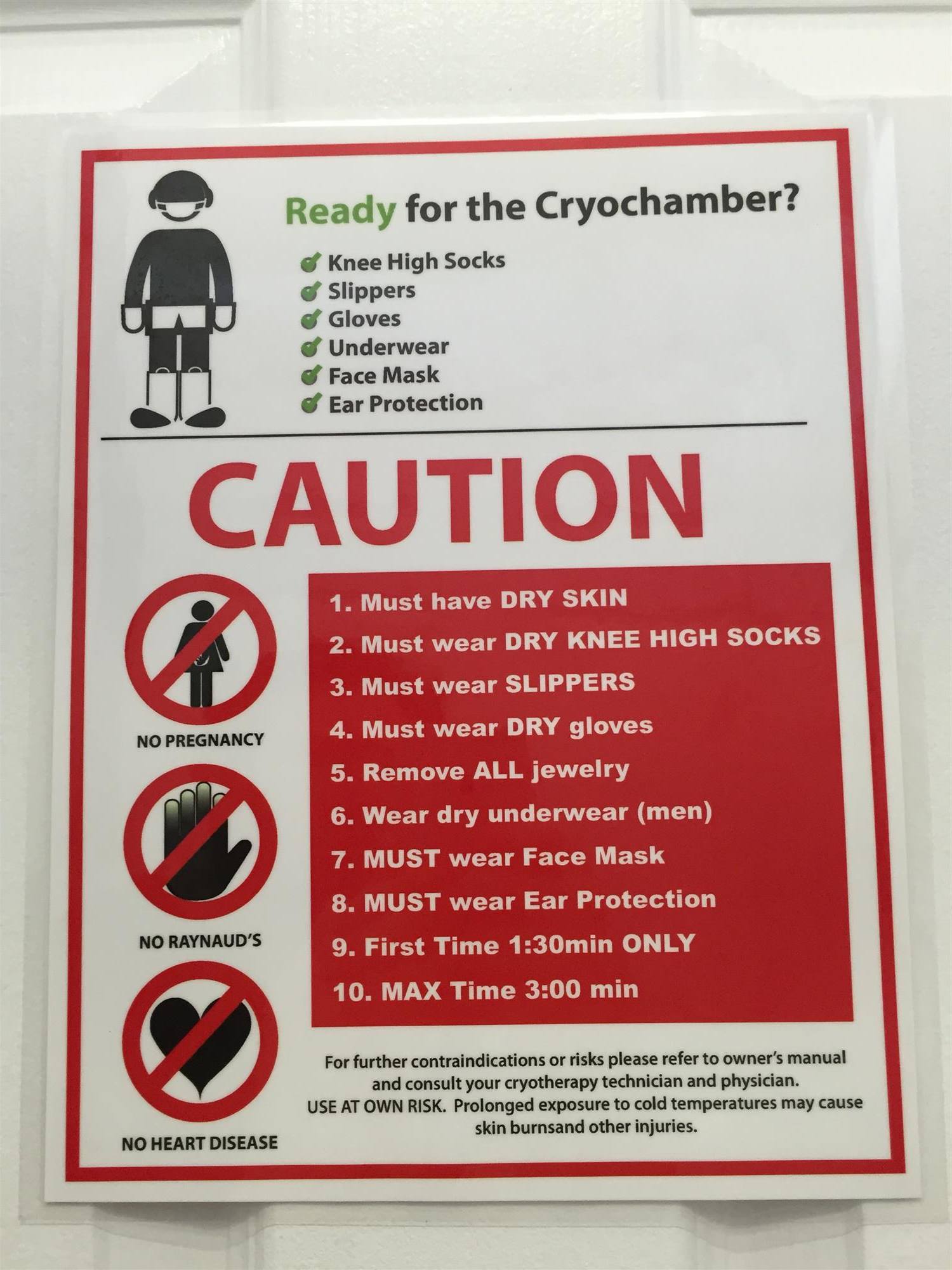 The cold was so extreme that my body didn’t seem to know what to do with it. Without the accompanying moisture it was used to in low temperatures, the icy air was prickly and remote, not settling in on my skin, as if the cold and I were being repelled like magnets. It was cold, but the cold somehow couldn’t reach me, inside. Fear and survival kept me warm. I felt my nipples turn rock hard, squeezing into a painful point. My eyes began to dry up, and the thin layer of snot lining my nose turned into icicles, poking my septum. It was an eerie analog of death, with little of the accompanying pain and panic. My basal temperature had no time to fall before the final countdown began.

I braced myself, trying not to count down with her. I knew that the seconds would seem much longer against my own racing brain.

I wondered how anyone could do this for a full three minutes. Didn’t they treasure their life, as I did? I was definitely going to read Infinite Jest.

If I got out of this, I would tell everyone I loved them, every single day. Even if I didn’t.

Maybe my mom was right about me being a psychologist. It’s not too late. Besides, I had a psychology minor in undergrad. Just a few more classes, and— 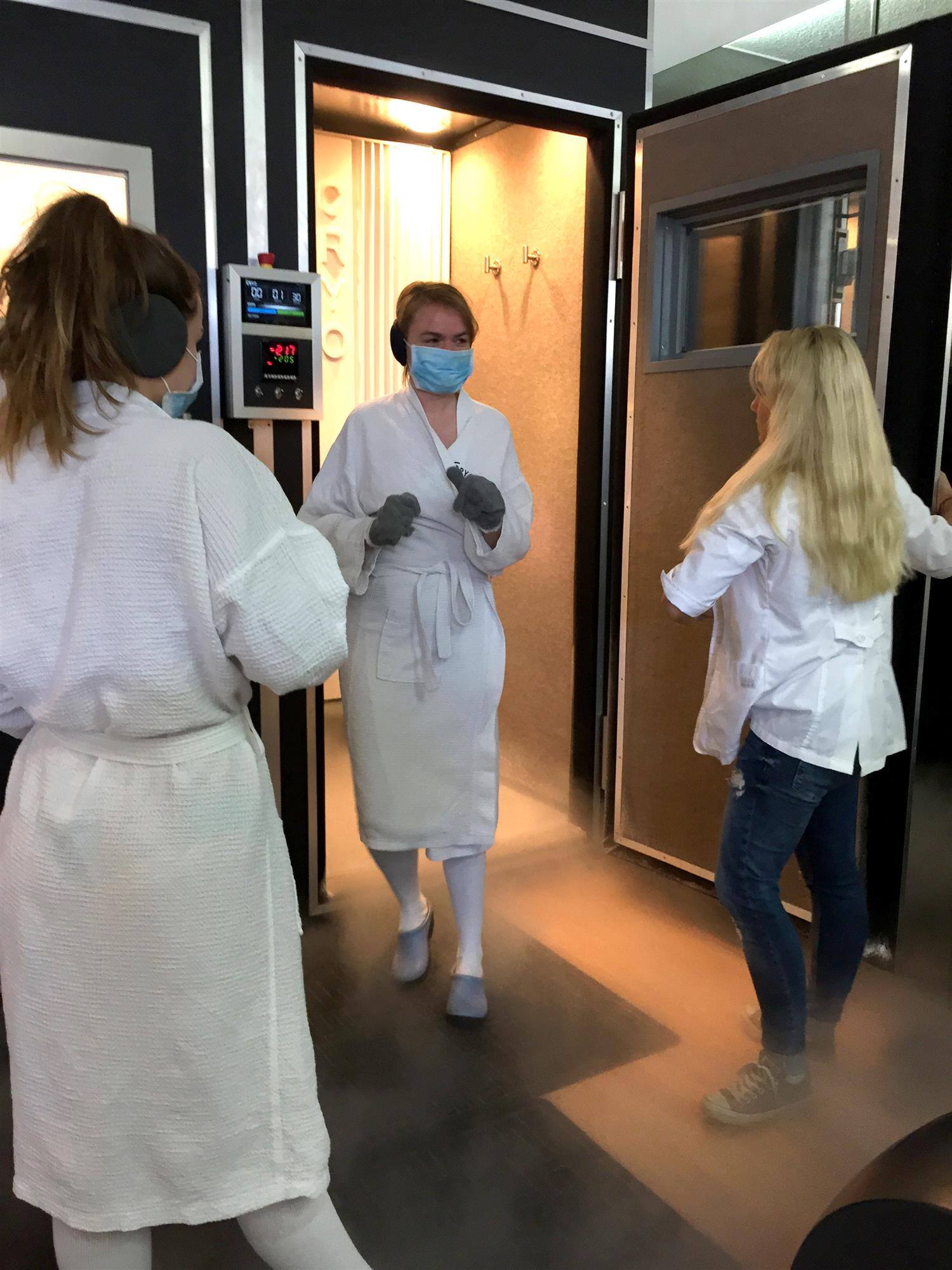 I burst out of the chamber, pushing the door with all my might. The apparatus is designed to allow exit at any time, even for the weakest of clients. It swung easily open and I tumbled out, nearly hitting the wall on the other side of the dressing room. I quickly put my robe on and thrust the dressing room door open. The technician looked at me, wide-eyed, for signs of panic. I must have passed the “alive” test, because she nodded casually and grabbed an infrared thermometer.

“Stay there; I have to take your skin temperature,” she said.

She measured the temperature on my lower shin.

“Hey! How was it?” asked Ross, eagerly waiting outside for my return.

“You next?” the technician asked him.

“Yep!” said Ross, eagerly stepping into the chamber. His two minutes passed in no time.

When we left, we noted the things we had that were supposed to improve in the next few days: my headaches (ever present), my recent insomnia (caused in part by worrying about cryotherapy), and Ross’s sports injuries. A few days later, we compared notes. Ross’s injuries were about the same. My headaches hadn’t improved. But I had slept like a baby that night.