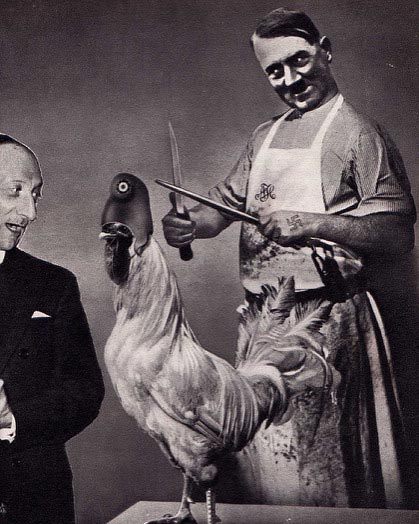 You know that riddle about killing baby Hitler? The one where you’re asked if you would go back and kill an infant Adolf, knowing that he would one day be a mass murderer? I wish I could go back and kill vegetarian Hitler, because he’s been ruining conversations for decades.

I happen to be a vegetarian (and not a Nazi), so I get to hear this little diddy about once every two months. Often I’ve said nothing about my diet at all; I pick up a piece of Tofurky, and out spills the rage of someone at the dinner table, who feels judged even while my mouth is too full of soy meat to be making moral proclamations. But even my meat-eating friends (the ones without so much inner turmoil, I suppose) blink in absolute astonishment. Why are we talking about Hitler at Thanksgiving? Why are these thoughts even connected to our dinner? Is our friend having a stroke? And wait, hang on, did Hitler eat meat?

So, let’s settle this: Was Hitler a vegetarian?

First of all, no.

If being a vegetarian means abstaining from meat without fail, then no. Don’t trust me, and don’t trust animal rights brochures. Trust the chef who fed him: “I learned this recipe when I worked as a chef, before World War II, in one of the large hotels in Hamburg, Germany,” writes Dione Lucas in her 1964 classic, Gourmet Cooking School Cookbook. “I do not mean to spoil your appetite for stuffed squab [pigeon], but you might be interested to know that it was a great favorite with Mr. Hitler, who dined at the hotel often.” Lest we think she meant a different Mr. Hitler, she adds, “Let us not hold that against a fine recipe, though.” 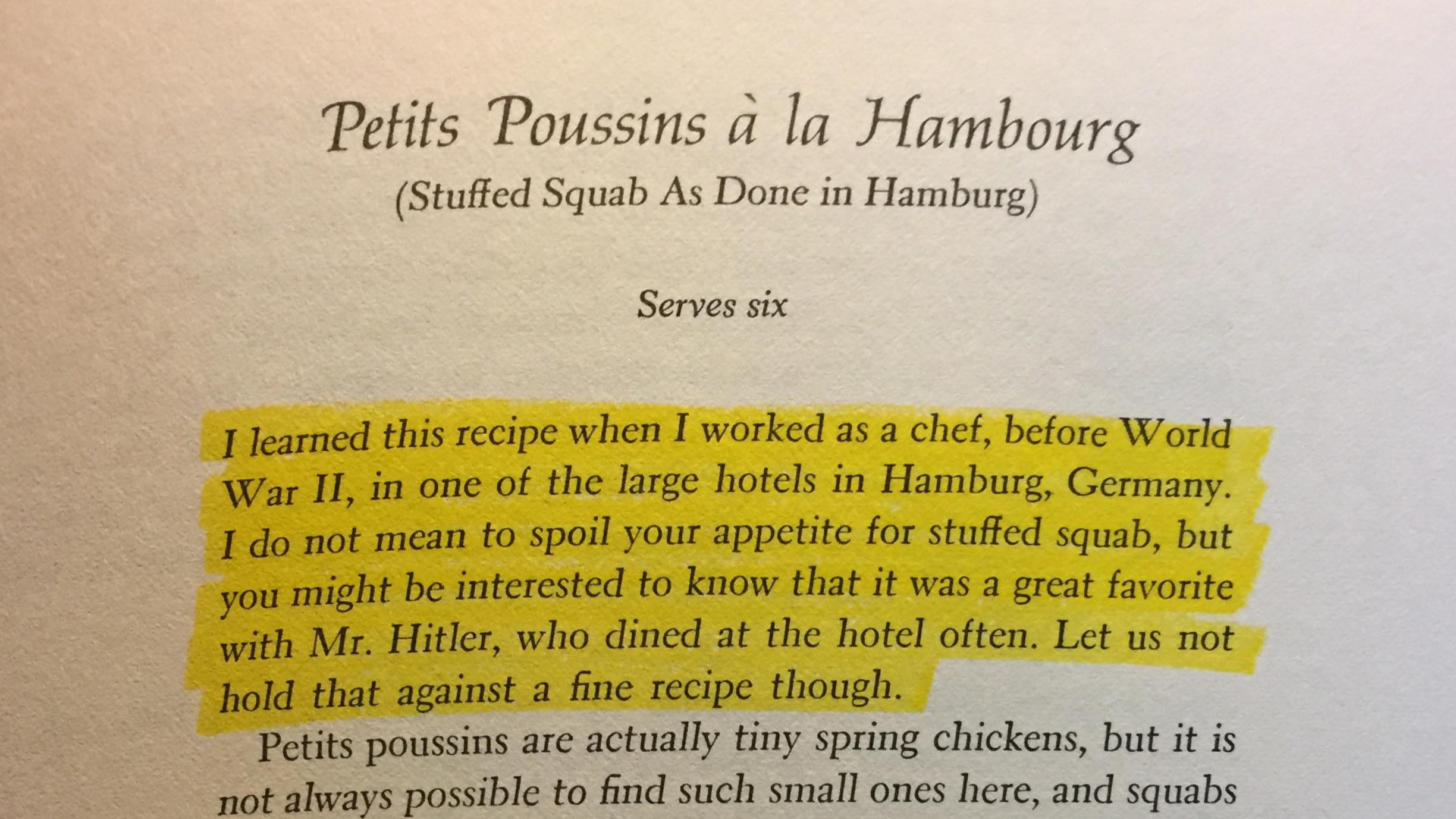 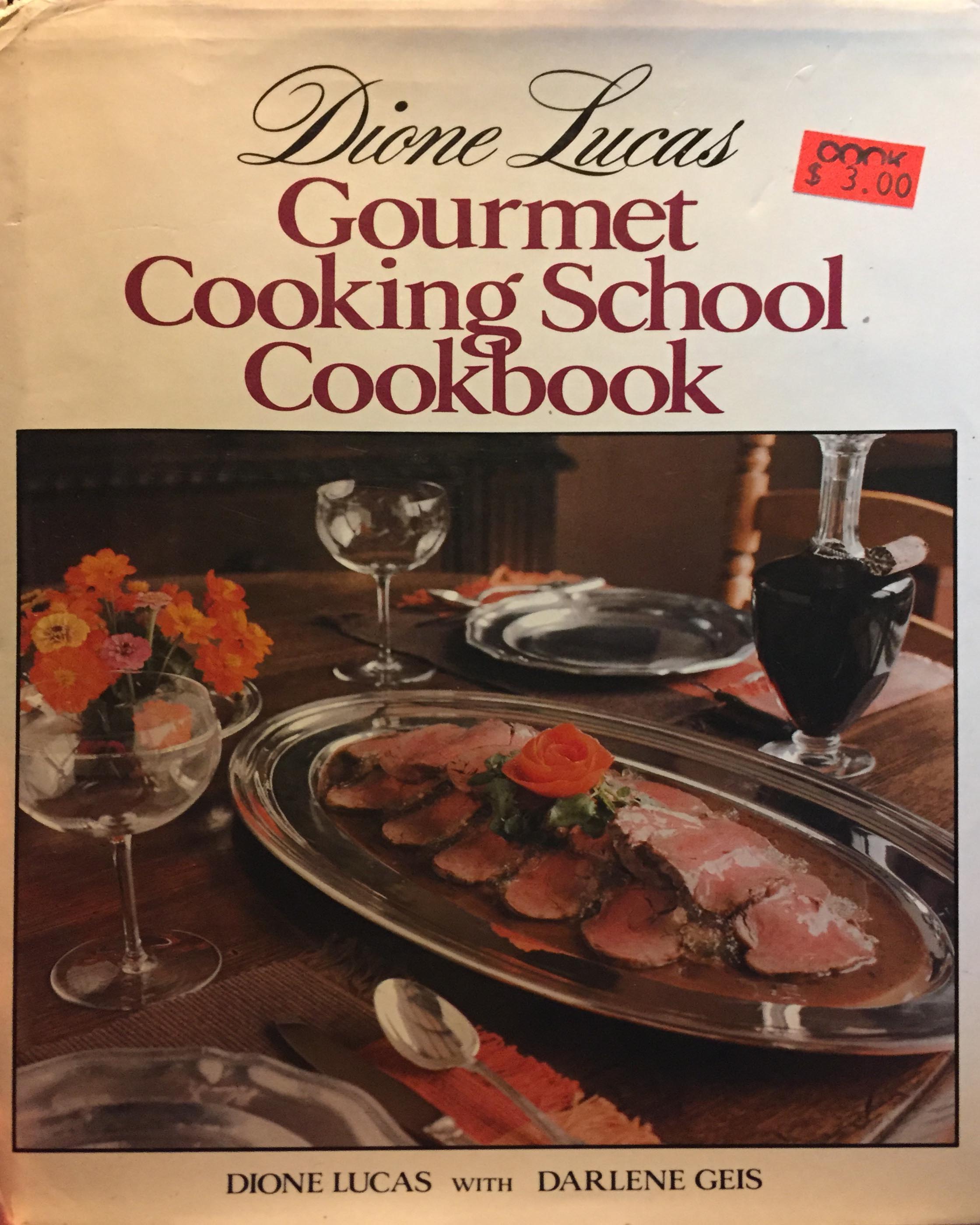 I picked up a used copy of the cookbook (for a humble $4) to verify the quote, which has found its way into defensive vegetarian literature near and far. It is, indeed, legitimate. And one has to wonder why anyone would claim that Hitler, of all people, loved their cooking, unless he did. Other biographers have him eating sausages and liver on the regular, and some (such as historian Robert Payne) believe Hitler’s reputation as a vegetarian was a shrewd propaganda campaign to make him appear an ascetic.

But in 2013, that all fell apart. A 95-year-old German woman named Margot Woelk gave an interview to the Telegraph that year, claiming that she had been one of Hitler’s official food-testers. Horrifyingly, she was required to try each of his meals herself before serving it. If she died of poison, as the plan went, he wouldn’t have dinner that night.

“It was all vegetarian, the most delicious fresh things, from asparagus to peppers and peas, served with rice and salads,” she told the Telegraph. “It was all arranged on one plate, just as it was served to him. There was no meat and I do not remember any fish.”

Indeed, Nazi Germany put in place a number of animal protection laws, including famously banning vivisection, so this all makes sense. Even so, biographers such as Payne claim that Hitler was not devoted to the lifestyle, choosing to feast on meats when he so chose. But as Hal Herzog, PhD, points out in Psychology Today, that’s not so different from most Americans who call themselves vegetarian but give themselves the wiggle room to succumb to human temptation without giving up on their ideals (and their “vegetarian” moniker) altogether.

So, was Hitler a vegetarian? Sort of, off and on. He certainly advocated a vegetarian diet and lifestyle at certain points, but he by no means maintained the diet consistently. And when trusting people at their word, the last person you might want to trust is, well, Hitler.

Which brings us to the most important question: Why are we still talking about Hitler at the dinner table?

Humans are capable of grand and tragic displays of cognitive dissonance. Where Hitler may have ironically seen common ground between humans and animals, but failed to find compassion for his fellow human beings, many of us are guilty of the reverse.

In the end, it doesn’t matter whether Hitler was a vegetarian. But, if you really want to know, he wasn’t a very good one.

Dream Meditation Is a Bit of a Snore