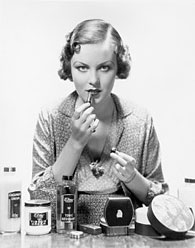 There’s two things the general public are guaranteed to be concerned about: their health and the contents of their wallets. Yet somehow we are drawn to claims that you can make your thighs thin via a tube of goop and eagerly purchase promises of perfect complexions through using gunk best slapped on with a spatula.

Just look at any of the millions of products on supermarket shelves worldwide touting legally defensible scientific-sounding advertising gibberish (with no explicit claims as to what exactly the “life-enhancing collagen” will do for your dead hair follicles). Skepticism and questioning the pseudoscience in cosmetics should go together like the products’ endless promises of long-life and perfect skin. With that in mind, I set off to conduct a series of interviews over several months on this topic, hoping to get some sensible advice as to what to do when making up my mind about makeup.

When talking to people for the episode of the Token Skeptic podcast (“On Myths and Makeup”), I tracked down representatives from the United Kingdom, United States, and Australia. While all of them encouraged a skeptical outlook, they all had slightly different takes on the cosmetic industry and how laws in their countries deal with the more questionable efforts to promote products.

For my interview with a representative of the United States, I spoke to Perry Romanowski. He’s a member of the Beauty Brains Podcast and the Chemists Corner website, where he reviews cosmetic products and solves consumer problems. Perry has written and edited numerous articles and books, taught continuing education classes for industry scientists, and is the author of the book Beginning Cosmetic Chemistry.

Perry Romanowski: It’s actually an area in skepticism that I don’t think is really analyzed that much. We don’t really look at consumer advertising, and at least I don’t know of other podcasts dedicated to consumer products and the kind of information that people are getting through advertising, and how they can be skeptical about those things.

Kylie Sturgess: Do you think people are naturally skeptical about cosmetic claims, or do we just lap it up and accept what’s being fed to us?

Romanowski: I think there’s kind of a dichotomy there. People don’t want to know the truth. People actually want to buy the story. But I think in buying the story, they sort of accept that it is a story.

For example, you know, the best functional ingredients might be something like petrolatum, but nobody wants to buy a petrolatum-featuring lotion; what they’d rather have is an aloe vera lotion. So what the companies are going to do is create the best working lotion, but then they’ll drop in some aloe vera because it’s the glitz and the story that people really are ultimately going to buy.

Sturgess: Do you think that people have overly high expectations of what cosmetics can do for them?

Romanowski: Some people do have unreasonably high expectations, yes. I mean, it is sad to me when I see people spending hundreds of dollars on beauty products which I know are not going to work any better than something that would’ve cost them five dollars. But if you put it in the right packaging, you put the right story, have a dermatologist behind it saying it’s going to work better… that is enough to convince people to buy a product for an amount of money that they don’t really need to spend.

Sturgess: What’s some of the best advice that you give to people when they’re heading towards the cosmetic counter, some of the key terms that we should be more skeptical about?

Romanowski: Well, if you look at the United States (and I think it’s pretty much true around the world) we have a law here where it says you cannot lie in advertising. So you can say whatever you want about your product—you just can’t lie. Some of the beauty claims, the way the things are worded, give an impression of a meaning that maybe isn’t there.

For example, the marketing people, when creating an anti-aging product, they may say something like, “Rejuvenex” or something like that, and that’s just a made-up word. The way that the claim is written, they’ll use the words, “With Rejuvenex.” So they’ll say, “This product moisturizes your wrinkles with Rejuvenex.” The way that they write the claim implies that the Rejuvenex actually does something—but it doesn’t, really, if you look at the way the sentence is written. So it’s a little bit complicated, and that’s one of the ways that people can trick you.

Another thing to look for is when you see the word unique. Pretty much anybody can use the word unique in their advertising, because if you made the product, it is unique to you, so… But it doesn’t really mean anything.

You know, another thing that doesn’t really mean anything is when you see a claim about “cruelty-free” or “not animal-tested.” It’s a big area that people are concerned about. But the truth is you can say “not animal-tested” as long as you didn’t personally test the product on animals. Now, you could’ve had all your raw material suppliers do all the testing using animals, but you still can say that you didn’t do it. So you should be wary of those kinds of claims too.

Sturgess: Just how ludicrous can advertising about cosmetics get?

Romanowski: Well, anti-aging is probably one of the biggest areas for cosmetics where you see products that say that they work as well as a facelift, and this is absolutely untrue. There’s no way that a topical product will work as well as surgery. I don’t care how much money you spend on it, it just doesn’t work that well!

Sturgess: So what’s the legislation like in the USA? You mentioned that there are requirements in terms of advertising; is there a difference between federal and state level?

Romanowski: As far as it goes, not really. The cosmetic industry is regulated in a variety of ways. Mostly it’s self-regulated in the United States. But we have to follow the laws of the FDA, the Food and Drug Administration. And you have to follow the FTC [Federal Trade Commission], which talks about the advertising. But the industry is largely self-regulated, and it has worked. As far as producing a safe product, it has worked rather well for a lot of years, and that’s sort of why there hasn’t been any push for more regulation. But, you know, cosmetic companies are interested in selling products and getting people to re-buy products, and so it is in their interest not to produce products that are dangerous!

Sturgess: Are women still targeted more than men by cosmetic products? I mean, historically, they clearly have been, but is there a growing trend for men to be drawn to the cosmetic counter?

Romanowski: Well, there absolutely is a push by the cosmetic industry to grow and segment. Every year, that’s always touted as the next hot segment. And the truth is I think it’s like pushing a rock up a hill, because it turns out that men mostly don’t buy cosmetics. There’s been small growth in the development of cosmetics for men in the market, but it just ends up that wives or girlfriends are the ones buying the products for them!

There has been some small growth in the market, but it has never caught on the way that people have thought it would. Cosmetic companies still focus on selling primarily to women, because women are the people who buy the products.

Sturgess: So what would you say is a good blanket strategy to adopt when you’re shopping for cosmetics? What should people be mindful about?

What I would suggest is that you go through and start with the lowest price that you feel comfortable paying and try products on that level. The truth is, most products are going to work and function pretty well because a lot of it is about the experience of using the product. So if you start at the lowest price that you feel like spending, and if those products don’t work for you, go up to the next level of pricing. Find a level of product that you like how it works and you feel comfortable spending that amount of money. And stay away from products that really cost a lot of money, because they aren’t working any better—it’s all just marketing.