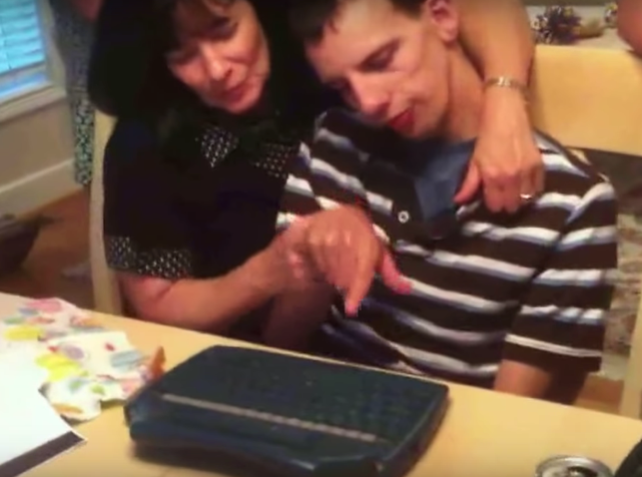 As readers of this column will recall, FC is based on the theory that many people with profound language deficits suffer from a physical problem—an inability to produce the sounds for speech or the movements required for writing or typing—but are not cognitively impaired. According to this theory, these individuals can’t get their ideas out of their broken bodies. FC supporters claim this problem can be solved by having another person—a facilitator—hold the student’s hand or arm and guide it over a keyboard. If the facilitator could just steady the non-speaking person’s hand, the intelligence hidden within could emerge. In the early 1990s, FC spread rapidly, and with the help of their facilitators, many previously non-speaking people began writing poetry and performing at grade level in school. Some of them even went on to attend college accompanied by their facilitators.

But in the early 1990s, the first empirical tests of FC began to appear, and the results were devastating. In every case, double-blind studies revealed that the facilitator—the disabled person’s helper—was doing the typing, not the person with autism. It was a Ouija board–like phenomenon, and the facilitators appeared to be entirely unaware that they were the authors of the words on the computer screen. Since then a number of systematic reviews of the evidence have come to the same result: FC doesn’t work (Mostert 2001; Mostert 2010; Schlosser et al. 2014).

Down syndrome is a genetic disorder that affects approximately one in a thousand births worldwide (Weijerman and De Winter 2010). Typically, the nucleus of each cell of the body (other than in the sperm and eggs cells used in reproduction) contains 23 pairs of chromosomes. In its most common form, Down syndrome, also known as trisomy 21, is produced when a child’s cells show an extra chromosome or partial chromosome in pair 21. Children with Down syndrome have characteristic physical features, including low muscle tone, small stature, and an upward slant to the eyes, and they experience substantial learning challenges. A recent survey of adult Americans with Down syndrome found that 57 percent were in paid employment but only 13 percent worked twenty-one hours a week or more (Kumin and Schoenbrodt 2016). The cause of Down syndrome is still unknown, and the most important known risk factor is maternal age, with increased incidence in mothers over the age of thirty. 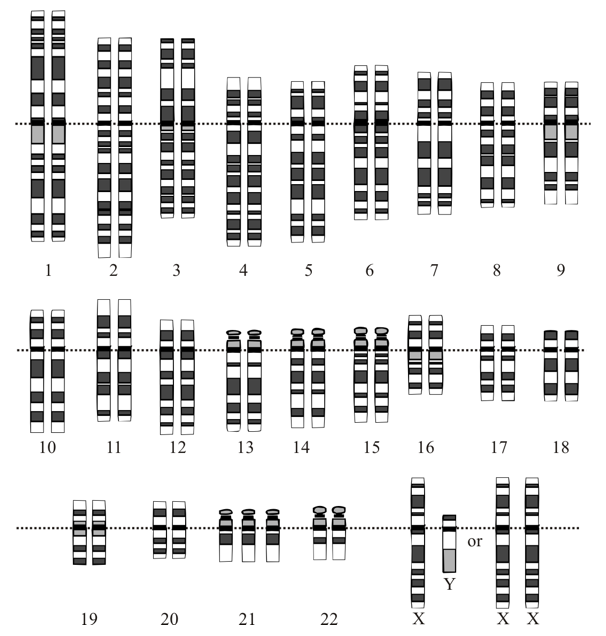 Karyotype of a person with Down syndrome showing three copies of chromosome 21.(Source: Wikipedia)

The NDSS FC webinar was set up as a narrated slide show. Participants who logged in on their computers saw Ashby’s slides and heard her voice but could not see her. In addition, participants could type questions for the speaker to answer. There were the usual number of technical problems, and, unfortunately, only Ashby could see the questions participants posted. There was no opportunity for real dialogue.

The webinar began with some quotes reputedly from people who use FC to communicate, and, in many cases, Ashby reported that some of these individuals now typed independently and could read what they had typed. However, it was not clear whether the quotes presented were written with a facilitator or independently. Many of the quotes were about how these individuals had suffered discrimination and believed they had a fundamental right to communicate. Others described the physical problems they faced in an effort to get their words out.

Ashby’s presentation had all the earmarks of a belief system rather than a description of an educational technology. She repeated a popular motto of the modern FC movement, “presume competence,” and she repeated the word believe several times in her presentation. Furthermore, she expanded the idea of presuming competence, asserting that it was also important to “constructing competence”:

It is not enough to believe people are capable of communicating; there are things we need to do…. So, constructing competence is something that requires action.—Christy Ashby, PhD

As this quote suggests, Ashby encouraged facilitators (a) to believe these non-speaking individuals have the ability to communicate and (b) to be active when helping them—a combination that is likely to lead facilitators to control the typing while believing they are not.

In addition to encouraging belief in the technique, recent strategies for promoting FC have turned it into a social movement. In her introduction to the quotes from FC users, Ashby invoked the disability rights motto, “Nothing about us without us.” This phrase expresses a reasonable demand that affected people be included in the design of policies and adaptations for their benefit, but when we are talking about the statements of non-speaking people obtained using FC, it is not clear the “us” is them. It seems important to point out that substituting another person’s opinions—the facilitator’s—for the non-speaking person is no better than leaving them out of the discussion entirely. It is perhaps worse.

The social movement approach to promoting FC has many features. For example, an increasing number of people with autism freely adopt autism as a feature of their identity. Many years ago, professionals were urged to say “person with autism,” rather than “autistic person.” The latter was thought to define the person by their diagnosis—turn them into their diagnosis—whereas a person with autism was a person first. Recently this idea has been reversed. Members of the Autism Self-Advocacy Network, an active autism rights organization, and others have embraced the autistic identity. Similarly, in talking about Jamie Burke, a famous FC user who graduated from Syracuse University, Ashby said that Burke, “identifies as autistic.” The adoption of an autistic identity is also consistent with the civil rights approach to advocating for people with autism, and as a result many messages obtained through FC describe the forms of discrimination the individual has suffered. In an extreme form of the civil rights approach to promoting FC, at least one advocate has asserted that opposition to FC is a form of hate speech (Stubblefield 2011).

Several critics of FC, some of whom were members of the “True Voices” group described in an earlier column, enrolled in the NDSS webinar, and to her credit, Ashby responded to a few critical questions. When asked about the “controversy” surrounding FC, she asserted that “actually the studies have been mixed,” and she offered to supply the questioner with studies that support FC. Of course, the studies that provide a test of authorship of the messages are not at all mixed.

One interchange was particularly interesting. A questioner asked, “What would it take to convince you that FC doesn’t work?” In a move reminiscent of Supreme Court Justice Brett Kavanaugh’s confirmation hearing interchange with Senator Amy Klobuchar, Ashby avoided answering by turning the question back on the questioner: “What would it take to convince people that for this individual it does?” Unfortunately, due to the webinar format, the questioner could not easily respond, but there was an obvious answer: “I would be convinced if the individual could pass a simple double-blind test similar to the ones used in other evaluations of FC.” All the published studies of FC that have used double-blind tests of authorship have shown that the facilitators—not the disabled individuals—were controlling the typing.

Ashby took another question from a participant who asked about a recent policy of the American Speech-Language-Hearing Association (ASHA) that opposed the use of Rapid Prompting Method (RPM), a variant of FC. ASHA, like a large number of other professional organizations, had previously released a policy statement against the use of FC. Ashby acknowledged the new ASHA policy but was encouraging, suggesting that different school systems were looking to their speech therapist professionals—some of whom are using FC or RPM—for guidance:

I am working with lots of schools in the area, and they’re certainly aware of the ASHA statement. But they also believe very strongly that this is a human right and a civil right for students. —Christy Ashby, PhD

Based on this remark, it appears that some speech therapists are continuing to use FC and RPM in opposition to the recommendations of their professional organization.

Although FC and RPM are most often associated with autism, this is not the first time these techniques have been promoted for children with Down syndrome. Back in the early 1990s, when FC was new, its proponents suggested it might be useful for children with Down syndrome, and in 2005, Christine Tracey (2005) wrote an article in Down Syndrome News and Update about what she believed was a successful implementation of FC with her son Matteo. The family lived in Rome, Italy, where Matteo attended school with a facilitator. In addition, Ashby quoted an FC user with Down syndrome named Mary, also Italian, who used FC. Finally, Ashby suggested that FC could be used with any number of conditions that shared a lack of speech ability. The first step was to presume competence.

Given NDSS’s mission of being “The leading human rights organization for all individuals with Down syndrome,” it is not surprising the organization supports a communication method that Ashby described as a “human right and a civil right.” Nonetheless, it is unfortunate that a leading Down syndrome advocacy group is promoting a belief system over evidence-based methods that work.

A New Review of FC

All of this is somewhat ironic because less than two weeks before the NDSS webinar, a new review of research on FC was published in the peer-reviewed journal Autism & Developmental Language Impairments (Hemsley et al. 2018). Since FC was introduced in the early 1990s, there have been a series of systematic reviews of the research on FC. Hemsley and colleagues covered the period between 2014 and 2018, and their conclusions were not at all ambiguous:

This does not sound like “mixed” research results. When you compare the findings of this study with the NDSS webinar presentation, it is hard to avoid the conclusion that those who conduct rigorous, peer-reviewed research on FC live in a very different world than the NDSS, Christy Ashby, and the Syracuse University Institute on Communication Inclusion.

In contrast, the NDSS does not support Down syndrome as an identity. Their Preferred Language Guide [pdf] still supports the “person with Down syndrome” terminology.