Despite returning to its regular home at the Fashion Institute of Technology in Manhattan, change was in the air for NECSS 2018, the tenth annual event coproduced by the New York City Skeptics and the New England Skeptical Society. With James Randi being unable to attend the Northeast Conference on Science and Skepticism on July 12–15 as originally planned and Bill Nye being a late addition, most of the speakers were likely seen by veteran skeptical convention-goers for the first time.

Among them were the keynote speaker, renowned science writer Jennifer Ouellette, former science editor at Gizmodo and author of books such as The Calculus Diaries, Me, Myself, and Why: Searching for the Science of Self and The Physics of the Buffyverse. Ouellette’s talk, “Plateau: Why Nothing Changes (Until It Does),” addressed the counter-intuitive phenomenon of criticality, likening social change and other shifts to a phase transition. Nothing seems to move until about 25 percent of a population adopts a stance, then vocal members of that group begin influencing others.

Social media mavens such as physicist Katie Mack, who delivered an upbeat talk on the death of the universe, and chemist Raychelle Burks, went out of their way to engage the audience. Burks’s presentation, “It was the Professor, in the Library, with Poison,” touched on her own unique career trajectory and revealed a little more about the 300 or so in attendance than maybe we wanted to know.

“How many people want to learn more about murder?” Burks asked, to a resoundingly positive response.“That’s not disturbing in the slightest,” she said.

Burks, who now spends much of her day devising ways to detect drugs and bio-weapons, presented the audience with several different “murder” cases, each time providing a little bit of data, allowing people to talk about it among themselves, then fielding questions to see if they could hone in on the culprit. The first such story ended up not being a murder at all, though it sure looked like it at first. The truth became more apparent as threads became untangled and the injuries and circumstances came into focus. “The context really, really matters,” Burks said.

Mack and Burks were part of a NECSS 2018 speakers group that was more than half female, and the unavoidable topic of sexual misconduct in the skeptics community was addressed in a panel named “SciComm Meets ‘Me Too,’” moderated by Skeptics Guide to the Universe costar Cara Santa Maria and featuring Buzzfeed science editor Virginia Hughes, Guerilla Science head of operations Olivia Koski, and law professor Margo Kaplan.

“This is not new, it’s just that you now know about it,” Santa Maria said. The discussion rarely named names, though, and instead focused on the nature of evidence in sexual misconduct investigations, what these investigations are really like for women, and how we can all make things better moving forward.

“I think the skepticism community has a lot to say in this movement,” Kaplan said, specifically, where there’s an opportunity to dispel myths. “A woman’s statement is evidence,” Koski said, and the call to “believe women” just means to take that report as a piece of evidence and not to dismiss it out of hand. The number of false claims is very small, “so incredibly small,” Santa Maria said, although a source was not provided.

At the same time, Hughes emphasized that reporters are not “stenographers of women,” truly vetting claims and doing most of the journalism work behind the scenes. “This is not going to be fun for you,” Hughes said of any potential misconduct accuser, saying that reporters will go to all of your friends to try to find holes in your story. Kaplan said there’s little benefit to making a misconduct claim, as “it follows you around,” there will always be someone at the next job who didn’t believe you, and you might even lose a mentor in the process.

The panel also spoke about “benevolent sexism,” things that might seem helpful while assuming women to be helpless. Carrying someone’s groceries might sometimes be chivalrous, but maybe she doesn’t want strangers touching her stuff. The help that’s really needed is to not be silent when misconduct occurs, because then it’s normalized. “Call out bad behavior,” Koski said.

Primatologist Natalia Reagan’s talk, “Time Has Always Been Up,” echoed some of those thoughts, as she said, “you cannot blame biology for your bad behavior,” and other NECSS presentations roamed into the political realm, too, with panels on gun violence research, the benefits(?) of medicinal marijuana, and one named “Scientists Take Action,” moderated by Heather Berlin, featuring three scientists who have actually run for political office. 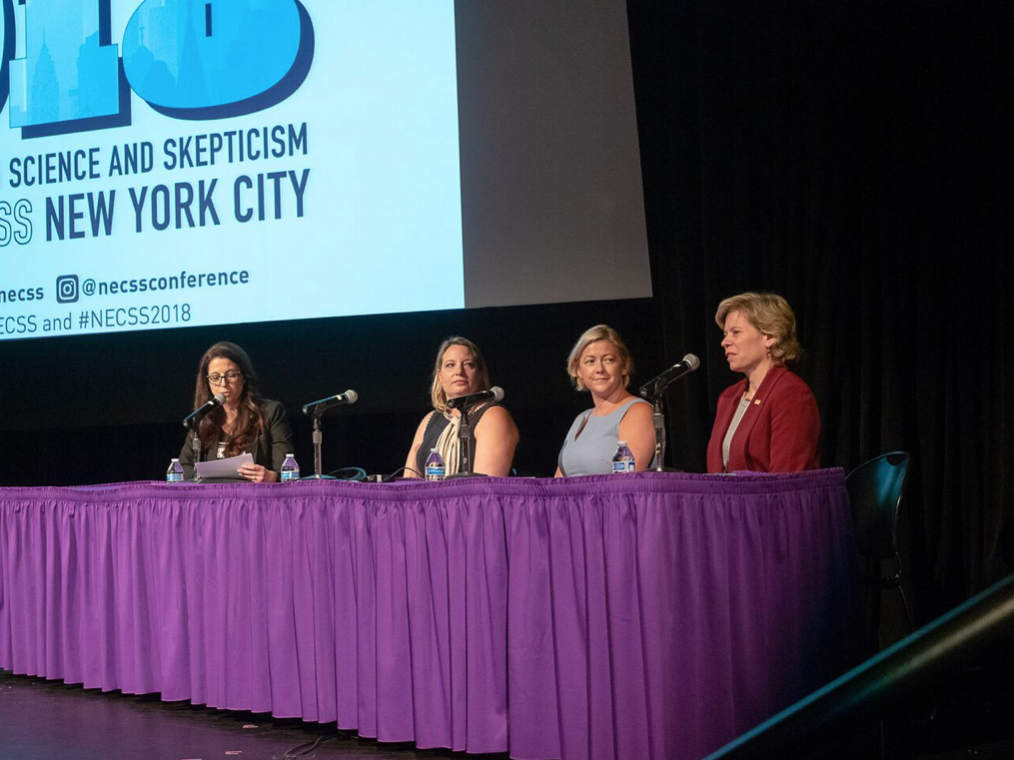 “It’s harder than I thought it was going to be,” said Yale molecular biologist Valerie Horsley and Democratic Party challenger for the Connecticut state senate. It bothers her that truth doesn’t get the same respect in politics that it does in science but adjustments are needed. “You’re a scientist, why would you do anything that doesn’t work?” asked Elaine DiMasi, who lost her New York congressional Democratic primary bid, about reticence to engage in professional marketing pushes. Shaughnessy Naughton, who lost her Pennsylvania congressional Democratic primary bid, said that first time candidates need to articulate why they’re running and what they hope to accomplish and not just rest on their credentials.

“It’s not about how smart you are,” Naughton said. “Nobody cares.”

NECSS 2018 topics were diverse, though, including a presentation on local myths by official Manhattan Borough historian Mike Miscione and one of the conference’s continuing hallmarks, a full day of Science-Based Medicine, presented by the website of the same name, who also cosponsored the conference. Talks included David Gorski on the hype of stem cell treatments, Harriet Hall on the dangers of cancer vaccine “manufactroversies,” Clay Jones and Grant Ritchey on quack Tourette Syndrome remedies, and Michael Marshall discussing his strategies with the Good Thinking Society that helped (almost completely) eliminate public medical funding for homeopathy in the United Kingdom.

“Clean eating is really about marketing,” Steven Novella said, in maybe the most relatable talk of the day. People tell you not to eat anything you can’t pronounce, but everything has a technical name, and you should avoid pesticides, even though 99 percent of the pesticides you ingest are produced by the plants themselves. The “clean-eating” movement wants to conflate physical and moral disgust, shaming those who don’t eat the right things, while making it so the “good” people are “reassured by a comforting label.”

NECSS 2018 also featuring a renewed emphasis on art and alternate outreach methods, as verbalized by Jay Novella in a Thursday workshop titled “Epic Movie Characters,” which also featured his wife Cortney, brother Steven, and physicist and Ninja Sex Party band member Brian Wecht. Other workshops included anthropologist and comedian Kyle Marian on using humor for outreach, the author on using pop culture, and artist Tony Saunders and singer Hai-Ting Chinn holding something like a “support group” for skeptics in the arts. Chinn actually concluded NECSS with an excerpt from her Science Fair opera, which followed a surprise performance by rap artist Baba Brinkman and Olivia Koski showing off a brain mold from a Guerrilla Science project that neurologist Steven Novella dutifully checked for accuracy. 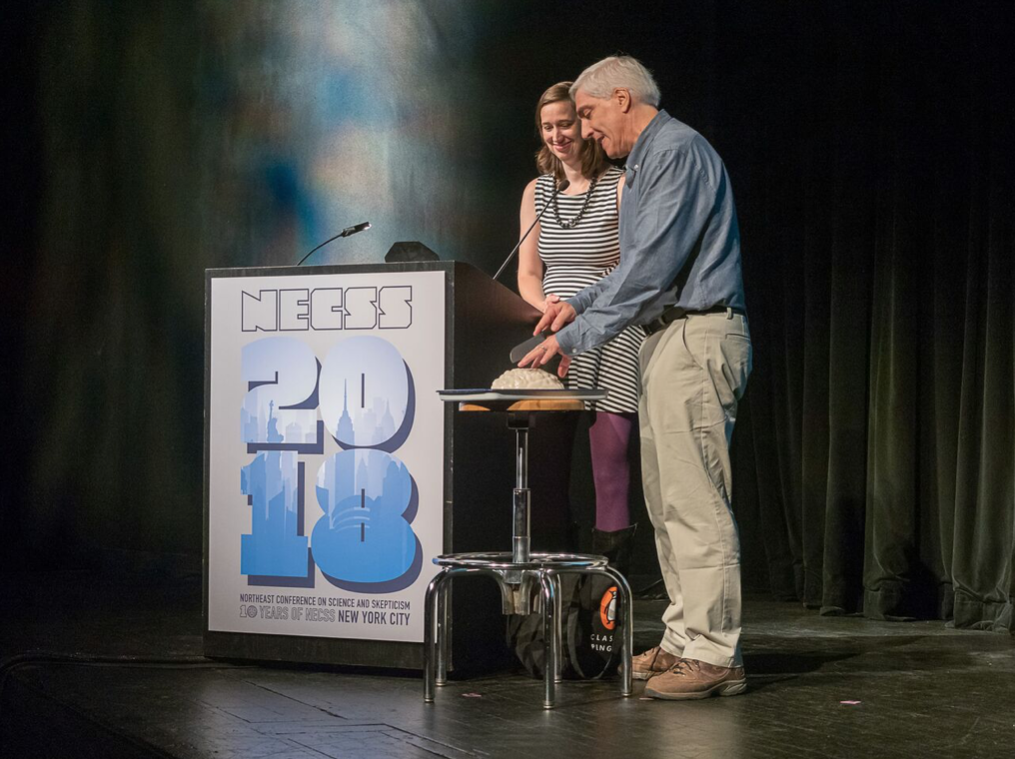 “Did Steve cut that brain up like a trained serial killer or what?” asked emcee and comedian Leighann Lord, whose attention to detail and highlighting of the weekend’s best moments made her one of the most dependably entertaining parts of the proceedings for a second consecutive NECSS. With a blending of new paths, old traditions, and new traditions, NECSS has taken its first steps in blazing a different trail in the future of skepticism.