Cover Image: Neon message on the outside of the Christchurch Art Gallery.

The New Zealand Skeptics have completed yet another awesome conference. This one was held November 29–December 1, 2019, in Christchurch on the South Island of New Zealand. I also attended the 2016 conference in Queenstown and you can read about that HERE.

First let me describe Christchurch, because Mark Edward and I spent a week wandering around the city and visiting the museums and galleries and just about everywhere we could get to on foot. The organizers had put us up in a hotel right across from the iconic Christchurch Cathedral that was destroyed by the 2010–2012 earthquakes and next door to the brand new public library named Tūranga. While over 400,000 people live in urban Christchurch, it felt like only a few thousand as we spent most of our time in the Cathedral Square. You might remember that Christchurch has suffered immense tragedy in the past few years. In 2010, the area started experiencing a series of earthquakes, the worst in February 2011 that liquefied the ground with a magnitude 6.3. From the stories I heard from the locals that rode it out, the problem was the motion that was up and down reaping havoc on buildings that were already suffering from the 2010 7.1 quake. Because the 2011 quake was shallow (only three miles below the surface) and it was only four miles from the city center. After the shaking stopped, the city found that over 80 percent of the sewage and water systems were damaged, and 185 people were killed, most in one building.

It was explained to me by Russell Tomes and Jonny Grady, who picked us up from the airport and drove us around the city, that what has sprung up in a lot of the vacant areas are art. Mark Edward and I found that to be very true, in nooks and crannies everywhere you find amazing street art and a lot and a lot of flowers. We also learned that Christchurch is called the Garden City, due to a botanic garden in the center of the town and plantings in anything that could hold a plant throughout the rest of the city.

To make the sorrow of Christchurch even more horrible, in March 2019 a lone terrorist shot up two Christchurch mosques, murdering fifty-one people who were attending prayers on a normal summer day.

The reason I feel mentioning these two horrible incidents at the beginning of my article about attending the NZ Skeptics conference is because these tragedies permeate through all things Christchurch. Maybe the locals no longer feel it, but as an outsider I sure did. The city has suffered so much and is trying very hard to fight back. Much of the pop-up artwork around town encourages people to engage with the art and in groups, some with messages of hope, togetherness, and resilience. The downtown merchants strongly focus on customer engagement, and most we saw are local non-chain stores. Even within the skeptic community, people willingly wanted to share their stories of “where they were when,” and you could feel the pride from the locals of perseverance.

Mark Edward and I arrived at Christchurch after a fourteen-hour plane flight from San Francisco many days before the conference to get acclimated and over our jet lag. One of our first stops was the nearby public library. Edward and I love books and feel at peace to be surrounded by them. I think you can judge a community by the quality of its public library. And Tūranga is incredible, not just the architecture but the details, when you walk in the front doors you enter into the magazine section. The latest Skeptical Inquirer magazine was there to greet us, always a great sign. A long table with chess sets and a jigsaw puzzle with a man attempting to put it together was a great sign, but the sealer for me was a vase of freshly cut roses near the welcome area. It was a great touch and made me want to spend time there. And we did; venturing to lunch in the library’s café, we found one of the NZ Skeptic Board members Clive Hackett hanging out with his son. Later on, I spent a couple hours catching up with one of my Operation Peach Pit operatives Daniel Ryan and his go-get-em wife Lisa. The rogues from The Skeptics Guide to the Universe (SGU) flew into New Zealand a day after we did but traveled to Queenstown and drove up to Christchurch stopping to have adventures and take a lot of photographs. They arrived in Christchurch on Thursday, which was Thanksgiving for us Americans. The Kiwis treated it like it was just another Thursday. The SGU, along with their families and some of the local skeptics had a very non-Thanksgiving dinner together where we got to meet one of the other speakers, Jacinta Cording.

The conference was held in the most amazing place, The Great Hall at the Art’s Center, which was next to Rutherford’s Den. Rutherford is known for receiving the Nobel Prize in chemistry in 1908 and for his discovery of alpha and beta radioactivity. Canterbury College in Christchurch was where Ernest Rutherford started his college education. Rutherford was given a small basement room to do experiments, which was part of the museum. He would later transfer to the University of Cambridge in England and then to teach at McGill University in Montreal, Canada. The college built an interactive museum devoted to his early history and discoveries. It was such a terrific place, and I learned quite a lot that I’m hoping to use during upcoming trivia nights at my local pub.

It was arranged that Mark Edward would shoot a promo for the conference with the team at Channel 3—“The Project.” Edward found out who would be interviewing him and we spent a couple hours scrolling through the interviewers social media. When it came time for the interview, Edward had memorized many details about the reporters’ personal life. We knew they would interview for ten minutes but cut down to three minutes, but we hoped the hot-read would make it on the show. It didn’t, but the interviewer and her cohosts had a lot of fun with Edward posing as a psychic and then explaining how he appeared to know all about her.

The pre-conference meet and greet on Friday night was held at the reputedly haunted Riccarton House. The organizers had several group games to allow attendees to interact with each other.

We officially started the conference on November 29 with 150 skeptics from across New Zealand, Australia, and elsewhere. Apparently 150 is one of the larger turnouts for a NZ Skeptics conference. Speakers Steve Novella, myself, Jacinta Cording, Maree Hackett, Mark Edward, Cara Santa Maria, and Professor David Wiltshire filled Saturday and part of Sunday. Subscribe to the NZ YouTube channel so you don’t miss these lectures.

On Saturday night, we had a formal dinner held in that amazing room and we were treated to music by Brad MacClure and Craig Shearer (on piano). Mark Edward did a hilarious mentalism act, and a good time was had by all.

The group gives several awards out yearly, The Bravo award is given to journalists to promote critical thinking in their reporting. The 2019 prize went to Tom O’Connor who writes for Stuff. The article that won him the Bravo is called “Snake oil claims allowed to go on too long.” Apparently, an American doctor who was registered in NZ to practice medicine was selling chlorinated water as a cancer cure, for $100NZ per two liter bottle.

Normally a Denis Dutton Skeptic of the Year is awarded, but the committee decided not to award it this year. Past winners have been Mark Hanna, Daniel Ryan, Siouxsie Wiles, Helen Petousis-Harris, Lance O’Sullivan, and Jessica Macfarlane in 2018.

Lastly, the group awards a Bent Spoon to the person or organization that has shown to be ridiculous and acts as a determent. Only NZ applicants are considered otherwise I assume the list would be too long. This award has been given out since 1992. The 2019 winner was given to the Wellington City Council for paying the contractor Downer Group for using water divining to find underground pipes. I love this quote from the Wellington City Council when they learned they had won the Bent Spoon, “Generally we like getting awards but we can’t accept this one … We’ve always been sceptical about dowsing—most of us don’t think it works—we didn’t collectively come down in the last shower of rain.” They felt that because the contractor didn’t charge extra for the dowsing and they didn’t dig a bunch of random holes that it was fine. Maybe receiving the Bent Spoon award will make them think twice before they set themselves up for appearing to endorse pseudoscience.

The NZ Skeptics should be very proud of their community. People are friendly, intelligent and open to having their beliefs challenged. I would happily endure the fourteen-hour flight every year if they would have me. If you are in New Zealand or think you might want to visit this awesome country, you should start planning for the 2020 conference to be held in Wellington. The dates are not firm, but I’m told it will probably be the last weekend of October. Check their website for details.

Christchurch was a beautiful place to photograph; all my photos are stored here and videos here. 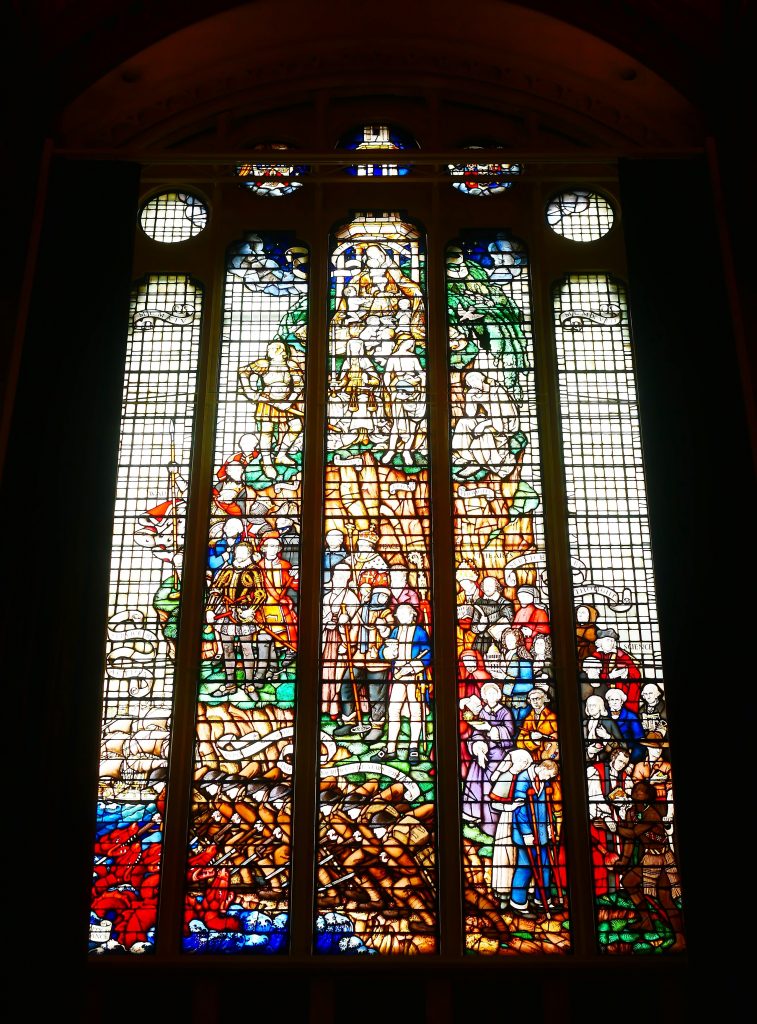 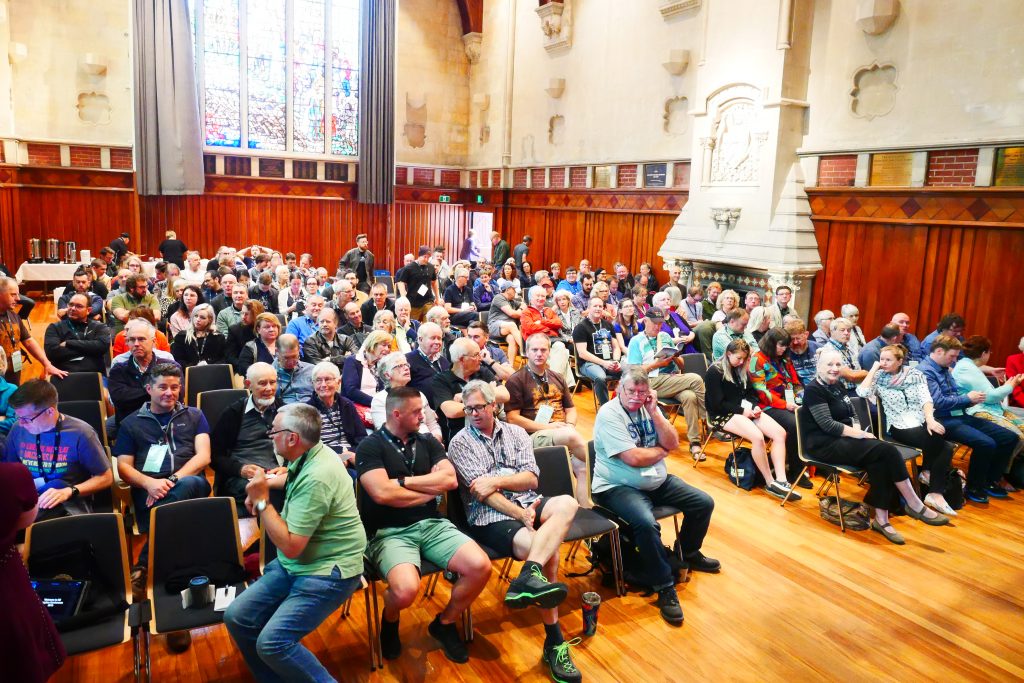