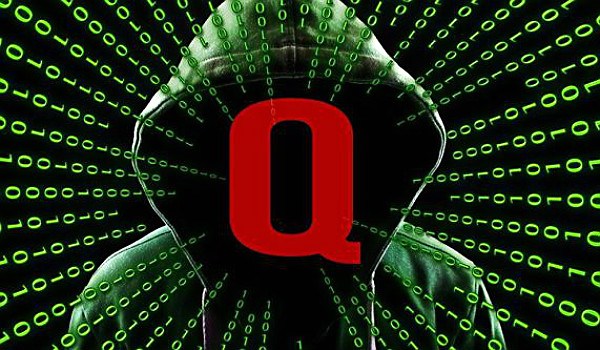 The Qanon conspiracy theory is both an old and new conspiracy theory; the narrative elements of the conspiracy long predate this most recent assemblage. In the week since Qanon signs and supporters appeared at the President’s Tampa rally waving signs and wearing Q t-shirts, the press has focused on the bizarre beliefs promulgated by the online community developing and pushing this conspiracy theory. Numerous explainers have appeared over the past few months, but Will Sommer has been on top of the story since the beginning, so I recommend his version. In short, it’s a conspiracy theory that posits that things are really sort of going Donald Trump’s way. The Mueller investigation? Mueller is working for Trump, and together they are going to root out the pedophile murder-squads of the Deep State. It is, in the words of Ben Collins, “Pizzagate on bath salts.”

The evidence for this conspiracy theory supposedly comes from anonymous posts on 4chan and 8chan by someone close to the administration who is supposed to have top-level “Q clearance” and leaves what are known as “breadcrumbs,” or cryptic clues. These “QDrops” are so vague as to invite numerous interpretations, and as a result the beliefs spawned by intense scrutiny are varied and totalizing.

None of this is remotely new in America, however.

The Pizzagate-style focus on violent crimes against children is an extension of an old, old scare story that has been used for decades to demonize outgroups, a lie as old as the blood libel, in which Jews were accused of killing Christian children for their blood to either perform Satanic rituals or make matzo. It also resembles the Satanic Panic of the 1980s, only this time nobody has found a single child who has been victimized by the cabal in question. In fact, the hardest evidence emerged from Tucson last month when a conspiracy theorist “patrolling the desert” came across a homeless camp that he immediately identified as a child rape camp, whatever that is. There is literally no evidence of this, and the activist has since been arrested for trespassing.

What stuck out to me as I watched the breathless wall-to-wall coverage of Qanon on major networks that don’t usually pay attention to that sort of thing was that anchors and reporters looking into it were flabbergasted that people could believe this stuff. But the older conservatives who are latching onto this conspiracy theory have been trained to believe something almost exactly like this, the story of the Second Coming of Christ as laid out in Revelation and interpreted by premillenarian Christians.

When I say premillenarian Christians, I’m talking about the religious perspective that led to the Left Behind series, the novels that are based on an interpretation of the book of Revelation where humanity has to go through a Tribulation, along with the associated wars and suffering at the hands of the Antichrist, before Christ’s triumphant return. When he returns, he will separate the sheep from the goats in one great act that resolves history, leading to his thousand-year reign. This form of Protestant eschatology is the predominant form among American evangelicals. Because the Bible is supposed to be the inerrant word of God, the faithful scrutinize Revelation and try to match characters and events to the world, essentially reading Revelation as if it were a newspaper. This flawed type of reading, which takes Revelation outside of the context of its writing and assumes that the modern world is its actual context, has been practiced for centuries. For instance, between the World Wars, some evangelicals claimed that Hitler or Mussolini was the actual Antichrist. It’s never been a particularly prescient type of reading, but it has kept Christians on the edge of their seats, biting their nails and all that, as they allow their imaginations to swap in and out new actors for the characters in the Bible. The end is, from this perspective, perpetually nigh because the faithful are distorting the world to fit their expectations.

In a country where a sizeable percentage of the population thinks that mighty, unseen forces are shuffling the chess pieces around the board for an inevitable victorious outcome, why should we be the least bit surprised when a secular version of the story pops up? In this version, we have the evil cabal working in secret, made up of Hillary Clinton and the rest of the Deep State sex deviants (and people in Hollywood) who have controlled the White House for generations in the role of Antichrist. We have the media being portrayed as a false prophet, and we have Q the Evangelist making the will of those closest to the Throne known to the people in a highly elliptical way open to lots of bad interpretations (according to one believer Q’s anonymous tidbits are the “most important intel drop in the history of information”). Above all, is a sixteen-dimensional chess-playing savior who is going to separate the “white hats” from the “black hats,” and all the bad actors (Democrats and, for some reason, John McCain) are going to be banished to Guantanamo Bay. And it’s all just about to happen! We are seeing, I think, a secular millenarianism, where the faithful read the postings of internet trolls as if they were gospel. America is the promised land and it will be made great again and be returned to a prelapsarian state.

The media should not be surprised by the emergence of this strange cluster of beliefs at this time of national division and uncertainty, which is always fertile ground for conspiracy theorizing. Further, Qanon is neither the strangest version of this story out there nor the most widely believed. According to a 2010 Pew survey, about 40 percent of Americans have convinced themselves, using similar interpretive textual practices, that all of what Qanon espouses is basically true, only in their version the faithful will be raptured into heaven first.