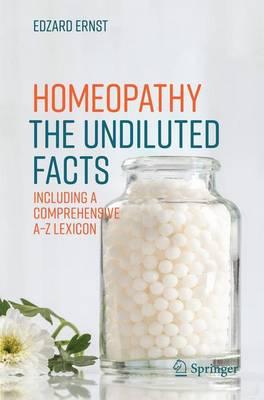 One of the great things about the holiday break is the opportunity to get some reading done—and Edzard Ernst has a new book out this year.

His new book traces the genesis, principles, and practice of homeopathy and discusses the reasons for its enduring popularity. Ironically, while modern medicine has changed beyond recognition, homeopathy, with its roots in alchemy and metaphysics, continues to be practiced precisely as it was in Hahnemann’s day.

Homeopathy—The Undiluted Facts : Including a Comprehensive A-Z Lexicon is the story of homeopathy and its almost magical attraction, with a rational and scientific discussion of the biological, chemical, and psychological questions that this treatment raises.

As he writes in the book:

My foremost aim is to provide a service to consumers by reporting the scientific facts in an accessible way. Most people who are tempted to try homeopathy and even many users of homeopathy have little idea what this type of treatment is all about. They might believe that it is akin to herbal medicine, for instance. Or they may assume that homeopathy works like vaccinations. Or they may think that homeopathy is synonymous with holistic health care. Misconceptions of this sort can never be a good basis for therapeutic decisions. I aim not to perpetuate old myths, but rather to facilitate well-informed, evidence-based decisions.

Edzard Ernst: I’m a retired professor of alternative medicine for twenty years at Exeter University. I’ve researched alternative medicine, all aspects, all treatments that you can think of. Now I’m retired, having published quite a lot, and my most recent book is on homoeopathy.

Kylie Sturgess: You’ve had a career that has spanned many years, and now your new book is called Homoeopathy—The Undiluted Facts. What led to this particular publication being written after all the other work you did?

Ernst: Homoeopathy has been with me all my life. As a boy I was treated by a homoeopath, my first job after studying medicine was in a homoeopathic hospital, and then I researched homoeopathy. I felt that a book would be in order not least because the lay public misunderstands homoeopathy so very much. Even from skeptics, I get the impression that they are often not quite sure what it is and make a lot of errors when they criticize homoeopaths.

Sturgess: What are some of the errors that even the critics of homoeopathy make?

Ernst: The most obvious is to claim that there’s nothing in homoeopathic remedies. This obviously is true for a lot of them but not for all of them.

If you take arsenic, for instance, you take the pure arsenic. If it’s prepared according to a homoeopathic pharmacopoeia, pure arsenic is already a homoeopathic remedy. You don’t buy it over the counter because it would kill you. The first dilution of arsenic contains enough arsenic still to kill you. The second dilution also could be deadly. There are too many misunderstandings and things are actually quite, quite complicated.

The other misunderstanding about homoeopathy is that there’s one single homoeopathy that we can criticize. Not true. There are actually quite a few different types of homoeopathy. There’s classical homoeopathy as it was taught by Hahnemann 200 years ago, but there are other forms like clinical homoeopathy, complex homoeopathy, isopathy, etc., etc. It all gets very complicated, and I thought a book would be in order to explain all these complexities.

Sturgess: I notice you wrote that you avoid jargon and did your best to abstain from taking sides while writing the book. Was it difficult due to your prior experiences, or did it help knowing that you had experienced both being pro-homoeopathy and then becoming skeptical of it?

Ernst: I think in the world of homoeopathy I’m probably quite unique because a homoeopath obviously is totally convinced and they’re often very deluded and remote from reality. Maybe I was such a homoeopath once upon a time. Now I’m one of the most outspoken critics of homoeopathy and therefore I understand both camps and I have a degree of sympathy with both camps. I think this makes the book unusual.

Sturgess: What particularly surprised me is the decline of the prescription of homoeopathy through the NHS in the U.K. What surprised you when you were doing the research for the book?

First of all, there’s plenty of evidence. They have got 500 clinical trials. Secondly, some of these trials do show that homoeopathy works, and some of these trials that show that homoeopathy works are actually methodologically sound. (I can only speculate why this is so, there are 2 main possibilities: 1. Pure chance; 2. Fraud.) Again, full of contradictions and fascinating, an absolutely fascinating subject.

Sturgess: The last time I interviewed you was about your memoir, A Scientist in Wonderland, and I asked you about your view of the future for alternative medicine claims. Do you think that your view has changed since that time?

Ernst: I don’t know what I said last time but I do know that I’m not very good at predicting the future! If not, I would be on the west coast betting on horses or getting very rich. I’m just a scientist, and I’m not somebody who can read tea leaves.

Having said that, I think alternative medicine is here to stay. We can fight it as much as we want to. People are just not rational and they want to believe in alternative medicine and lots of other things. What we can do is prevent the worst harm that cranks can do and that’s what I’m trying to do.