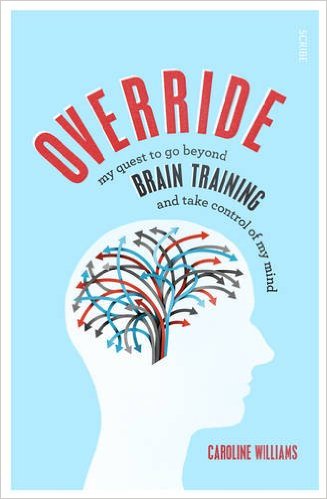 In the 1970s, only fitness fanatics went to the gym. Now a twice-weekly visit is the norm for anyone who wants to keep their body healthy. A similar revolution is happening in brain fitness and training. But there’s a problem: no one knows exactly what they should be doing. Brain training games aren’t necessarily all they’re cracked up to be—so there may be other ways to become more focussed, reduce anxiety, improve our maths skills, or better our sense of direction? Override chronicles Caroline Williams’s year-long mission to find out.

Caroline Williams: I have a degree in Biology, that’s where I started off. I never became a proper scientist, but then after university, I did a masters in science communication or science journalism really, and from then, just got into writing about science. Yes, you see the benefit of being a science journalist is that you don’t have to do the slow tedious process of doing science, that takes years, and years, and years, and you just go in at the end and say so many exciting stuff. You get to know the latest that’s going on without having to do it. That’s what attracted me to journalism.

Kylie Sturgess :  Override: My Quest to Go Beyond Brain Training and Take Control of My Mind is an exciting title. Did it take a while to come up with it?

Caroline: Well, Override came to me halfway through the process of trying to sell the book to publishers, because originally it was called PIMP My Brain, with the idea of being like PIMP My Ride.  But some people didn’t like that!

They thought it was a bit– they didn’t like it anyway. I thought Override is more– it describes what you are trying to do. It takes what you’ve got, and just flip the switch, and go, “I don’t want to be like that, I want to be like this.” The subtitle came along at the end, when I was like, “Oh, I feel like we need to go beyond brain training.” At the start I was going to look into brain training and what actually it meant, and whether it worked or not, and I very quickly found out that it doesn’t really do what it’s claimed to do, and what a lot of people think and hope it’s going to do for them.

Kylie: How long did it take you to plan this book? Did some of your previous journalism tap into the subjects that led to this extended investigation? 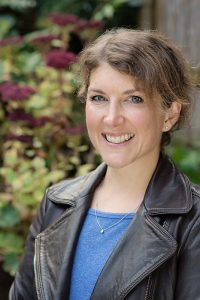 Caroline: Yes, some of them bubbling away for a very long time. I’ve been a science journalist for about fifteen years or so, and it’s around the time when I started, that the idea came through into the public that you can change your brain throughout your life, throughout the whole of adulthood. Then it didn’t take long for people to then jump on that and turn into brain training apps: “Improve your brain age by doing these things everyday – these puzzles every day.”

I guess from then I saw two things. First, I thought, “Really, is that going to do anything?” Then the science started to show that “No, it doesn’t.” It’s like the physical equivalent of doing a lot of sit-ups, and expecting your heart and lung fitness to improve. It’s doing one thing expecting everything to improve. At the same time, it was all the idea of your brain changing was being co-opted by self-help, left right and centre, saying, “Look, there’s neuro-plasticity, you can change who you are.”

I was also curious, so I got this shopping list of things I’d like to change about my own mind, and brain. Let’s try it, let’s see what we can actually do. Because what was out there already wasn’t satisfying for me in any other way. It was like, either do crosswords, or meditate, and that was about it.

Kylie: But it’s one thing to read general articles or phone up someone and say, “Hi, what does your research say?” It’s another thing to pop yourself into an MRI…

Caroline: Yes. I’ve never had an MRI scan before I did all this. I was a bit worried about it I suppose. I’d heard it was really loud and clunky and awful, but luckily, by the time they shoved me in these scanners I’d usually been doing several hours of psychological tests by then, and I was completely exhausted, and I actually found it quite restful. Then they shove you in! There were some guys at Canvass University, who just made it the most fun.

They were talking to me through headphone inside, and they just sounded like something like mission control from NASA, and they’re like, “Hey, are you okay in there?” I’m like, “Yes. I’m fine. Okay. Let’s go!” That was good, but the one that was really worrying was the brain stimulation, whether it was magnetic stimulation or electrical stimulation.

There’s something a bit nerve-racking about having someone strap electrical things to your head and then switch them on, with the idea that they’re going to change something inside your head. But it’s like, “Yes. I’ll live to tell the tale, so it’s fine.”

Kylie:  One of the great things about this book, is it addresses many myths. In fact, it jumps into them quite early in the book. What ones concern you the most? I’m certain there’s some that probably hit the wallet quite hard…

Caroline: Yes, this one size fits all brain training apps that are out there. They’re quite careful nowadays to not claim too much publicly because one of the biggest ones Lumosity got fined $2 million for claiming too much. But I think people do buy into them and they think– I was speaking to a friend at the weekend who was saying, “Well I do this every day because my mother had Alzheimer’s and why aren’t they going to help me stave off that.” She’s basically doing everything she can to try and stop the same thing happening to her which is totally understandable.

But the problem is there isn’t any good evidence to back it up. I think people are spending money and time doing something that’s probably isn’t doing them any good at all. Actually, in terms of keeping your brain healthy there’s a lot more evidence to things like physical exercise, aerobic exercise and good diet and keeping your social life going and they seem to have much more impact on your brain than anything you can do in 10 minutes a day.

Kylie: I think one of the great lessons I learned from this book was that anxiety is bad for everything, I was like, “Oh good, great – an excuse not to worry so much!”

Caroline: Yes, when I started out I knew that I was a bit of a stresser and a bit of a worrier but I had no idea the impact it was having on everything. It was robbing me of my ability to control impulses like to be distracted, it was taking away from that, it was taking away brain power I could be using to solve Math problems. I was going, “I can’t do this.”

It was getting in the way of thinking and also just this underlying current of everything that was just really unhelpful, and I did scour the literature to find some benefits of anxiety, and I really couldn’t find anything, at least not for the individual. I think if you consider it in terms of groups in evolutionary terms, if you have somebody who’s anxious in a group and he’s always looking like a meerkat for danger then it’s probably good for the group as a whole but that particular meerkat person will probably won’t have the most efficient brain, will probably die younger for a lot of stress. Yes, it’s really not good for anyone!

Kylie:  Overall, was it difficult to maintain some of the lessons you’ve learned in the book? Caroline: Yes, well, the one that has really stuck is the sustain attention training I did which wasn’t so much about learning a skill, it was about getting to learn the state of mind that is best for focusing for long periods which I thought is called relax and ready but it’s like being in the zone really. What I learned from that is it’s actually not what you want to do to try too hard to focus to stare at your computer screen and go, “Come on, I’ve got a deadline.” That’s not the best way to do it.

The best thing to do is just allow your mind to wander, have a little bit of downtime if you got the time and can go for even a ten-minute walk round the block, just clear your head and go back and that state is much more likely to show up. That’s been a real revelation, it sounds like not much at all but it really has been something that I have used ever since. The other thing that stuck with me is the idea that mindlessness, the opposite of mindfulness is actually really important to make room for as well.

It’s the best state if you want to be, creatively, as it gives you a mental break. Rather than trying to fight that and think that you’ve got to be on all the time, just giving yourself a bit of time to let your mind wander where ever is, it doesn’t feel like work but it’s actually going to make you more patient anyway and it’s going to make you feel better and more relaxed. It’s definitely worth making room for I think.