First, it was found in Danish waters. And then France. Then in New Jersey. A fish, normally found in the Amazon, was scaring the pants ON fishermen
around the world. Why be scared of a pacu? Teeth and what it was rumored to eat. 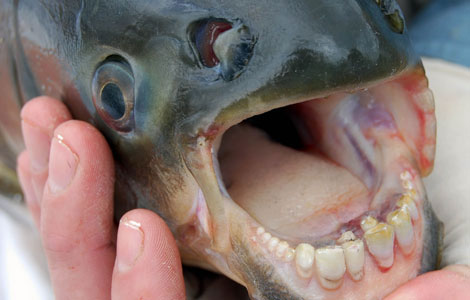 It has teeth resembling humans'. It is often associated with its horrifying family relation, the piranha. The pacu is the common name given to several species of omnivorous freshwater fish of South
America. They are frequently sold for aquariums. When they get too large or unwanted, they are illegally released into the local waters. They were also big
news this past summer.

Here is an example of how the story was covered, from The Independent (UK):

“Testicle-eating fish, the Pacu, found in Paris with fears it could be coming to the UK”


“It is a fish that could give the great white shark competition as the most terror-inspiring creature of the deep. With the appearance of the piranha,
but with teeth that look uncannily human, the pacu usually dines on a feast of insects, decaying plants and fruit that fall into the waters of the
Amazon. But it has become more known for reportedly dining on another food: men’s testicles.”

Sensationalism, pure and simple. Competes with a great white shark for terror? HARDLY. It's only twelve inches (or so) long! It's related to the piranha
but it doesn't devour people. It doesn't even eat meat regularly. The photo used in this article appears to be a sheepshead (fish), not pacu. So much for
fact checking.

Maybe it was just a good story, but I suspect it was the image of a toothy mouth and the idea that the animal goes for the crotch that caused the media to
take the bait on this story. When I covered it for Doubtful News, it sounded fishy. In short order I
found there was no evidence for the claims that pacu were anything to fear. Disturbingly, I found that certain scientists who were sought out for
information by journalists promoted unnecessary fear by being a bit cheeky.

When a specimen of this fish was found in Danish waters, it was disturbing to wildlife officials because it should not be there. It is a tropical fish. The
threat of an out-of-place find of a nonnative species is an interesting bit of news, but the story got huge press in August 2013 on the basis of
problematic quotes from a professor, Peter Rask Moller, who warned people about the fish:


"All we suggested was that swimmers keep their pants on until we know if there are more of these fish out in our brackish waters," Peter Rask Møller, a
professor at the University of Copenhagen, said in an email to the Los Angeles Times.

The professor thought it was funny to suggest the fish was a danger to human males by mistaking their organs for its normal food of (tree) nuts. “The story
about the ‘nuts’ was never meant to be the headline. But it certainly got people’s attention,” Moller told CNN. “I’m sorry if it has caused you any
trouble. It was a bit of a joke, but I still will keep my swimsuits tied up, and I will never swim in an aquarium with these fishes.”


“The pacu is not normally dangerous to people but it has quite a serious bite. There have been incidents in other countries, such as Papua New Guinea
where some men have had their testicles bitten off. “They bite because they’re hungry, and testicles sit nicely in their mouth.”

I cannot find a verified incident of this actually happening. Where did he get it from? He may have heard it from Jeremy Wade of the TV show River Monsters
who also promoted the pacu water hazard:


Wade told the Daily Mail: "I had heard of a couple of fishermen in Papua New Guinea who had been castrated by something in the water. The bleeding was
so severe that they died. The locals told me that this thing was like a human in the water, biting at the testicles of fishermen. They didn't know what
it was.

In response to the August fish frenzy, Wade, commendably, gave a much more sane interview for Esquire where he reiterated this story. Wade made several
salient points about why this was not something to fret over. My lights, he did a better job than the other quoted fish experts. Perhaps because it is in
the water facing these threats in real life:


Whenever we do a shoot we do a risk assessment. “What’s all the terrible things that can happen? What’s the worst-case scenario?” But then in another
column it’s, “but what is the likelihood of this happening?” Yes, there is a chance that someone’s little Benjamin there could get bitten by one of
these things, but the likelihood is minimal I think. If you want piece of mind just cover yourself up and I think you’ll be all right.

The pacu Wikipedia page has information on a child being bitten on the finger by an
aquarium-kept pacu but no other reports of human incidents. Their scary teeth can deliver a nasty crushing bite because they are equipped to eat hard foods
like tree nuts. It was irresponsible for these professors, who the media looks to for expertise and facts, to extrapolate that the fish could be a threat
to human parts. Other fish in lakes and rivers have teeth and occasionally chomp on people, too. Should we get all nervous about them too?

Sheepshead
are fish that are native to the U.S. with a very scary dentition, even worse than pacus but we don't seem to get too worked up about that. As noted above,
some photos of pacu mouths appear to be sheepshead instead.

It is also worth considering how often men actually swim naked in these well-populated areas? It's POSSIBLE that those natives who regularly fish in the
pacu's Amazon environment may have had a few incidents (as I said, there is no readily available documentation of it), but that is completely different
that the situation of the pacu found in non-native waters. They are tropical fish, and while fairly adaptable it seems, they will die in post-summer
cooling or freezing waters. Only one specimen was reported in each of these places, not several. Nor is there any reason to believe many of them were in
the waters. It is unlikely that they can reproduce because the northern water conditions are not conducive to mating.

The previous unsubstantiated rumormongering provided a foundation to spread the nonsense stories about this fish again. When a specimen was caught in New
Jersey, the same ludicrous legend was attached.

“A fisherman at a New Jersey lake got a surprise when he hooked an exotic fish that’s been rumored to feast on testicles.”
[Source]

Really, people! The N.J. fish was only 10 inches long. Ooh, scary. Don't put it down your pants and you should be okay. The pacu has been found in loads of
other states and non-native locations. It's rather common to find it where it isn't supposed to be.

There are serious things to worry about. A pacu invasion is NOT one of them. Rotten tomatoes are metaphorically to be pitched at the media who ran with the
sensationalism. Finally, a note to scientists: don't assume the journalist will get your humor. Be aware of things you say, because many people will
swallow it hook, line, and sinker.