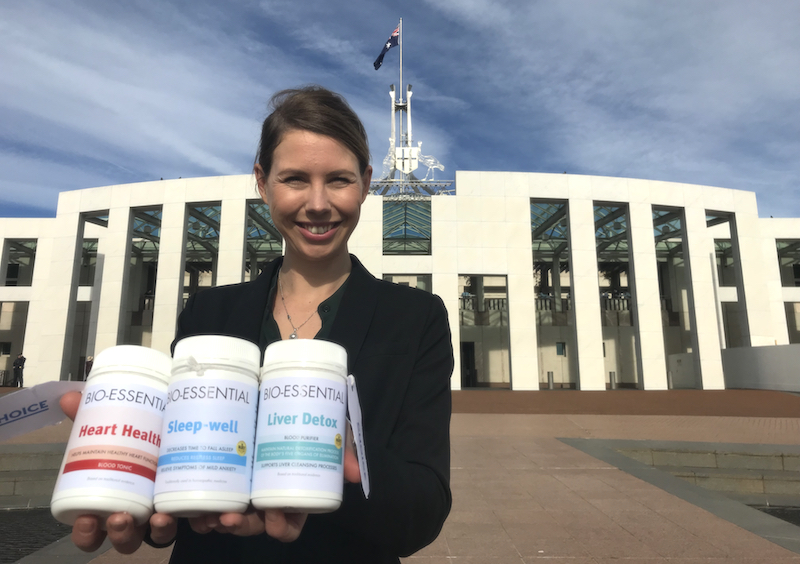 Hundreds of bizarre health claims such as “tonifies kidney essence” and “opens body orifices” could appear on complementary medicine labels under new laws being pushed by the Australian federal government.

Consumer advocacy group Choice is urging the Australian public to tell senators to knock back these laws so that Australians looking for vitamins and supplements can separate fact from fiction.

Their campaign points out that “Proposed laws could see dangerous and potentially misleading claims on therapeutic goods, especially complementary and alternative medicines like herbal and homeopathic treatments. It means that products can claim to decrease the time it takes to fall asleep or help maintain healthy heart function without having scientific evidence to back their claims.”

Katinka Day: There is a huge array of therapeutic products in chemists and supermarkets. So you know when you walk in to a chemist you’re often overwhelmed by choice, products spruiking a whole range of claims.

Currently the legislation is fairly weak in that it doesn’t really help consumers differentiate between products that are based on scientific evidence and products that aren’t. So it makes it really difficult for consumers to find products that are going to suit their needs or particular ailments. We’re talking about people who are at their most vulnerable, who are seeking to find a cure or prevent some issue happening. You know when it’s an issue around health people are more willing to spend lots of money. So that makes it a particular area of concern.

Choice is always concerned about truth in labelling. We’ve worked across a number of food issues, where we’ve seen products making unfounded or potentially misleading claims. But this area certainly got our attention due to these new laws that were being proposed to potentially tighten up this regulatory space. So it is a new area for us, but there is a lot of concerns that have been raised from looking into complementary medicines.

At the moment in Australia, complementary medicine or products are termed as low risk products, those that you would normally find in the chemist. They are able to make a wide range of claims. So they have a free text field and the onus is on them to hold the evidence. So there’s not any process where the regulators of Therapeutic Goods Administration has to check off those products. So it’s fairly loose at the moment.

Kylie Sturgess: So how did this campaign first get started? What are these new proposed laws that (and I’m quoting here from what I’ve seen from Choice’s media release), “Could see dangerous and potentially misleading claims on therapeutic goods.”

But instead of that theyallowed industry to contribute to what that list would look like, and it ended up with a list of 1,000 different claims that can be made on therapeutic goods products. Eighty-six percent of those claims are not based on scientific evidence.

We think that this is going to lead to a whole range of products making claims that aren’t based on scientific evidence, which is why we think that we could see potentially dangerous and misleading claims on therapeutic goods.

Sturgess: Just how dangerous and misleading could these claims get? Could there be new kinds of problems arising from these changes?

Day: They’re dangerous in the sense that you could potentially have a product that claims to help support heart health, for example, without having scientific evidence that it does that. So, what you could see is that people are spending money on those products and foregoing actual treatments that do work. That’s where we see it being quite dangerous.

Then on the other hand, you’ve got homeopathic products. So homeopathy has been warned by the Federal Government that it is ineffective in terms of treating peoples’ problems. So the fact that now homeopathic products can make a whole range of claims, based on this legislation, could mean that people are potentially mislead into believing that a product does one thing when it doesn’t.

Sturgess: I’ve seen online that you’ve been sourcing hundreds of vitamin bottles and lollies and labeled them with the kinds of claims that vitamin companies are able to get away with under these proposed laws, and you’ve been taking them to politicians in Canberra. How has that been received?

Day: Yes, this month we went to Canberra and we had a hundred bottles that we’d mocked up with what the labels would look like under the proposed laws. So, we had a heart health product, we had a product that claimed to help you sleep, and a product that claimed to detox your liver. These are all claims that would be allowed under the new legislation, and all of those claims are not based on scientific evidence.

We went and dropped one of these products off at every single senator’s office to highlight the issue. At the moment, how the legislation is standing, is that senators can knock it back and they have until 25th of June to knock back this piece of legislation before it becomes law. So we really wanted to highlight the detriment of these proposed laws to consumers by mocking up the products ourselves.

We got a fair bit of good feedback; once you kind of have these product claims on actual products you can see, you know how ridiculous it is and how it doesn’t help consumers make an informed choice.

Sturgess: Obviously Choice has made a very bold step by actually going out to Parliament and dropping it off to senators, but what can the general public do next? And what is Choice suggesting the public might do next, if they’re concerned about these kinds of claims being legitimized?

Day: On the same day we went to Parliament we got our campaign supporters to write to senators to remind them that they received a little delivery from Choice in their Parliament offices. We really need to highlight that there is consumer concern about these proposed laws.

The petition can be found athttps://campaigns.choice.com.au/tga-fact-over-fiction/