On the South Island of New Zealand, near the town of Wanaka, resides a tourist attraction that will make puzzle fans drool. It is Stuart Landsborough’s Puzzling World. Stuart and his wife Jan purchased seven acres of land and built a giant maze that opened in 1973. According to their website, they attracted 17,600 people in their first year. Last year almost 200,000 people visited the attraction. Stuart retired in 2004 and now it is in the hands of his family who continue to expand the exhibits. http://www.puzzlingworld.co.nz/

Why am I writing about Puzzling World from my desk in California? What does this all have to do with scientific skepticism? Stuart is a member of the NZ Skeptics and hosted the 2016 Queenstown conference awards dinner at the venue. Puzzling World ties even closer to scientific skepticism because, for years, Stuart has offered a $100,000 prize for anyone who can use their psychic powers to remotely find a piece of paper located on the property.

First, let me tell you about this curious attraction. I had never heard of the place and really didn’t know what to expect. I thought it was going to be one those mirrored rooms like at a carnival. I didn’t expect what I found there at all. The facade looks like four small, brightly painted buildings, built at very strange angles, fanned out like a hand of cards. It is quite a sight to see.

When I entered the main building, one of the first things I saw was a Jerry Andrus illusion, hanging from the ceiling. Also located in the foyer was a giant suspended faucet pouring water into a well. Everything in the room was designed to trick your eyes and tease your senses. I just wanted to stand in one place and look around; even the ceiling and wall supports were a visual treat.

There was an exhibit devoted to tricky marketing advertisements, very clever stuff that I’m sure sold whatever products they marketed. One that caught my eye was called “Guerrilla Marketing;” it was from Germany and called “Wrong Job,” showing people purchasing items at a vending machine or at a laundromat, even an airport scanner machine. The trick is that on the outside of the machine; there is a realistic image of a person inside the machine, sweating and cramped, scrubbing the clothes, looking through luggage with a flashlight or preparing the items for the vending machine.

Other exhibits in this area showed AT&T products painted to look like human hands and arms, in a variety of countries around the world; this promotes their “roaming” network. Just amazing art. There were company logos that told different stories, depending on how they were looked at. Interestingly, people see the FedEx logo often yet many will never notice that, in one version, there is a hidden arrow between the E and the x. There was a campaign for Schick NZ called “Free Your Skin,” with bearded men; only looking closely would you see that the “beards” were actually furry animals.

In another corner, you will find an exact duplicate of Stuart Landsborough sitting in a chair with his coffee cup in his lap. Stuart told us that he has sometimes removed the replica and sat in the chair himself, freaking out his family. What a sense of humor he has. Yikes!

We arrived outside visiting hours so we had free access to the whole building. Richard Saunders and I recorded a lot of video and audio for YouTube and his podcast The Skeptic Zone. He was suffering with a nasty cold, but he was a trooper and plodded on, even though some of the rooms wreaked havoc with his balance. We had a blast.

There was also a room with large checkers on the floor.Standing on one side of the room you seemed to be a giant, but if you walked to the other side you felt tiny. Another large room had faces painted on the wall that followed you as you moved around. This is the “hollow-face” illusion; look it up on Wikipedia! The gaze of these faces really do seem to follow you around the room.

All around the venue, hanging everywhere on the walls, are quilts and art that are optical illusions. 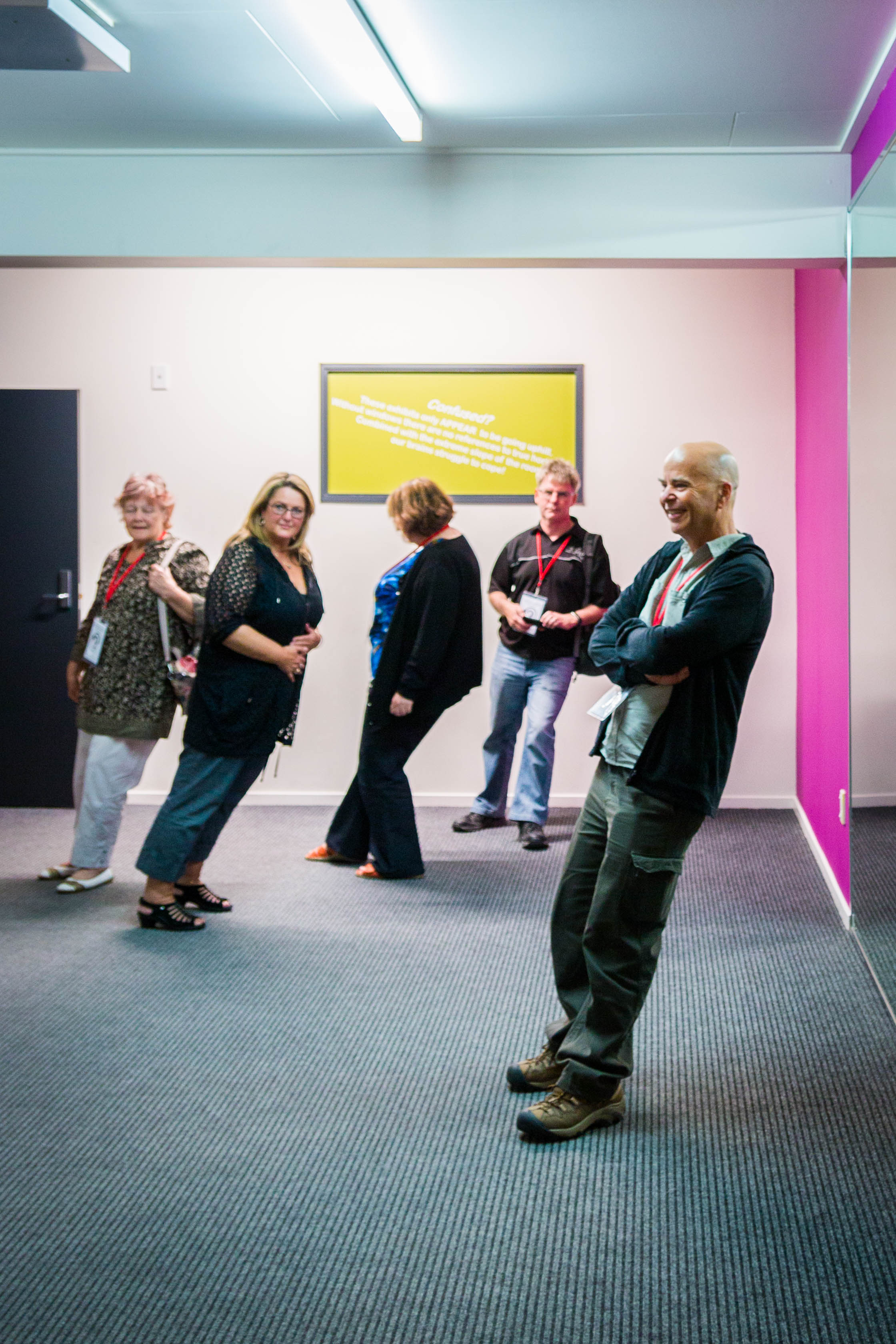 The sloping room is very unsettling; the floor is set fifteen degrees off horizontal. Stuart told us that for some reason, women are affected more, and children don’t seem to be bothered by it at all.

In another area, we found the psychic challenge, which states “We challenge you to find two halves of a promissory note hidden within 100 meters of this point. Follow the rules, find the two halves and $100,000 is yours!” The rules are pretty simple: you need an appointment with Stuart and need to pay a $1,000 deposit (he told us this is just to make sure people are serious). The psychic will sit opposite Stuart with a screen separating them, the challenger will ask Stuart questions for thirty minutes, and Stuart will only answer by thinking his responses. Then the challenger will have one hour to locate the two halves of the note. No major obstacles should lie in the ability to see the notes; Stuart told us that at one time, one of the notes was hidden in a toilet cistern in the building.

When the psychic challenge began, the offer was $50,000 and the notes were hidden within 5 km of the building. Later Stuart reduced the search distance to 200 meters, and finally, in 2006, he increased the reward to $100,000 and reduced the search distance to 100 meters. He told Richard Saunders on a Skeptic Zone episode that he hasn’t seen a lot of challenges over the years. One woman wanted Stuart to touch her breasts to help her locate the notes. He declined the offer.

Rounding another corner, I found another Andrus illusion, “Crazy Nuts,” which looks like two giant metal nuts (the kind that goes on a bolt). When you put your arm inside the holes of the nuts, it looks like your arm is bending when it really isn’t. Your brain wants to make it 3D because that is how it “should” work. This exhibit, like all the rest, shows us how easy it is to trick the brain.

Near our dining room I found another Jerry Andrus illusion, the “Magic Square,” which is one of my favorites.

The building and exhibits were not the only entertainment for the skeptics. Richard Saunders is a whole act by himself. He went from table to table teaching people the tricks of spoon bending. Then Brad MacClure entertained us with some music before the awards ceremony started.

The NZ skeptics have existed since 1986 and had their first conference that same year in Dunedin, New Zealand. They give out three awards, including the Denis Dutton Skeptic of the Year Award. The first winner of this award was Mark Hanna, in 2014, for creating the Society for Science Based Healthcare and battling pseudoscience via ASA and MedSafe. In 2015, the award went to Daniel Ryan, President of Making Sense of Fluoride. And in 2016, the award went to Siouxsie Wiles, a microbiologist and science communicator.

The Bravo Award has been given out since 1995 and is meant to be a “carrot” to journalists to encourage them to do good research and reporting. The 2016 award went jointly to Mark Hanna and Mark Honeychurch for providing data to The New Zealand Medical Journal detailing scientific research into Chiropractic. The last “award” is the Bent Spoon, which is given to a person or group that “should know better” … and be “wilfully misleading with intent to profit.” According to Chair-entityship Vicki Hyde in 1996, the group saw an increase in calls from the media that begin with “‘We don’t want to get the Bent Spoon so we thought we’d better check with you guys…’ It is gratifying to note that such calls have increased over the past four years.” The Bent Spoon was first awarded in 1992 to the Consumers’ Institute for an alt-med article they wrote. For 2016, the award was given to the New Zealand Herald for publishing a variety of pseudoscience articles presented as fact without refutation. 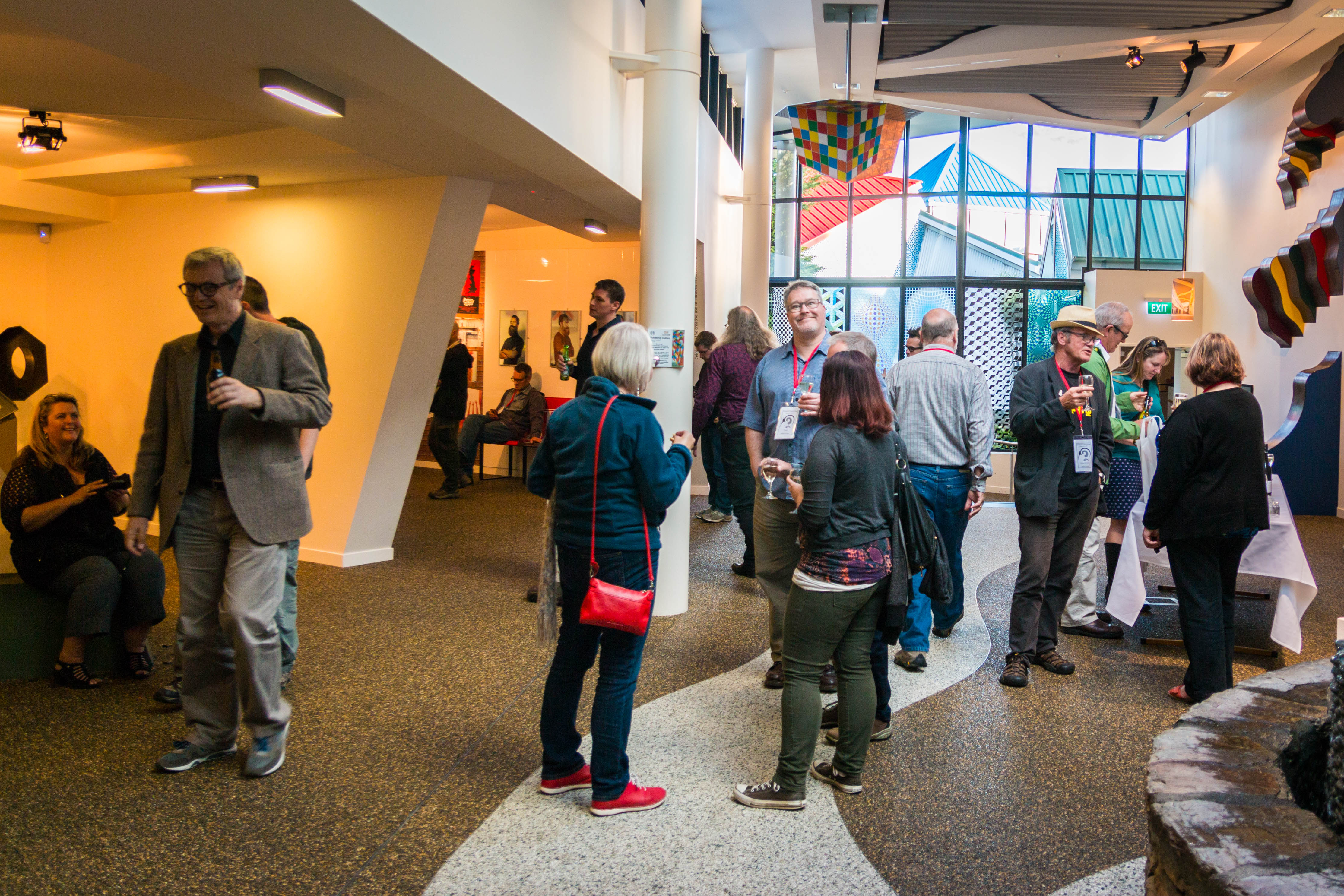 To recap, Puzzling World is really worth a visit; I missed quite a lot because I was too busy socializing, eating, and listening to music. I really need to get back there for another visit; I missed the main maze and the Roman toilets. Apparently, that was a big deal as many people were talking about them on the bus back. One thing I did not miss was my first view of the Southern Cross in the night sky on the drive back. New Zealand is an amazing place; the people even more.

Thanks to Rob Palmer, Gene Roseberry, and Stuart Jones for proofreading.