Baba Brinkman
is a Canadian rap artist, writer, and performer and the creator of “The Rap Guide to Evolution,” a hip-hop exploration of modern
evolutionary biology, natural selection and evolutionary psychology. Fast, furious, and not for the faint-hearted, his performances have shocked
and delighted listeners worldwide.


“The Rap Guide to Evolution”
was first performed at the Edinburgh Fringe and has even become a teaching resource. Since then, he has followed up with a number of ventures,
including more albums, TEDx talks, and a sequel stage show specifically about evolutionary psychology. “The Rap Guide to Human Nature,” was adapted
into a new production, “Ingenious Nature,” and ran off-Broadway from November 2012 through to
January 2013.


In 2014, he has plans to complete a documentary, provisionally titled “Darwin’s America,” and will be heading to the New York City Skeptics’ North East Conference on Science And Skepticism before touring across Australia in
May/June. 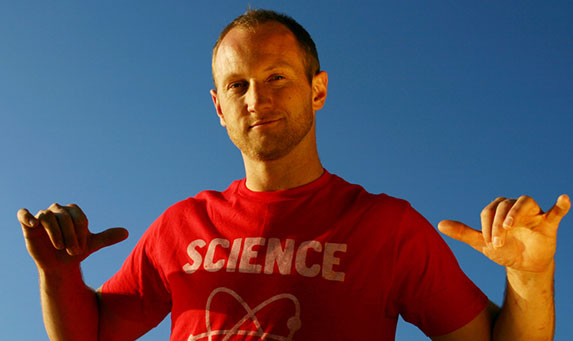 Baba Brinkman:
When I first started, I did a show about The Canterbury Tales. I used to perform my rap adaptation of Chaucer on tour.

I took it to Australia and I took it to England and while I was in England, a biology teacher happened to see the show and he saw the potential. He reached
out to me and said, “If you can do The Canterbury Tales, I bet you can do The Origin of Species.”

I was not a science person; I had only a comparative literature background but he encouraged me and offered to be my scientific expert consultant. He peer
reviewed the raps. I would write the songs, send him the lyrics and he’d come back with comments and at the end I could feel like what I was saying in the
songs was actually articulating the scientific consensus around Darwinian biology.

Therefore, I’m just a messenger—don’t shoot the messenger! If you don’t like the message, take it up with your biology professors at your university
because this is what they all teach!

Kylie: Your work has been incredibly successful. You won the Scotsman’s Fringe First award in 2009. You’ve traveled worldwide, including heading to Australia
again in 2014. Did you ever expect this kind of success?

Baba: I can’t say that I did, really. I started out quite small. I just wrote the original raps, “Guide to Evolution,” songs to perform at a Darwin-themed
conference, and then took it to a couple of festivals. The response has just been really overwhelming.

I think it’s something that I guess people are ready for. There are a lot of people that are interested in evolution but not really sure what you can say
about it that’s definitive or what it explains in terms of human behavior.

I think that’s the part of the show that’s resonated the most with people, is not just explaining Darwin’s vision but celebrating it and looking at how it
can actually be seen as inspirational and empowering for us.

It’s been a great ride. The highlight for me came a couple years ago when I got to open for Stephen Hawking at a festival! I got to go on stage before he
did his lecture and just also just after him. While I was performing from on stage I looked over to the side and he and his retinue had stayed to watch the
show from the wings. There was Stephen Hawking parked at the side of the stage while I performed the raps.

Kylie: What have been some of the challenges of bringing science and music together, particularly rap, which I guess has got an urban attitude to it? I don’t
really think of it as being complementary to science, in my mind…

Baba: If you think of science as beakers in a chemistry lab or astronomy, a lot of the physical sciences would be more of a leap—but evolution is about
behavioral sciences. Rap is, if nothing else, human behavior. It’s human behavior on display.

The subject matter of rap is betrayals and conflicts and competitions and status clashes and reproductive challenges.

Basically, a lot of evolutionary biology, when it comes to behavior, really boils down to attracting mates and defeating rivals. That is what rap is all
about. If you listen to the lyrics it’s about those two topics.

I just went through a load of hip-hop songs. My background is more with hip-hop than biology, so I’ve got this literacy where I can quote my way through
rap songs. I just show how what the rappers are talking about are their personal stories and experiences—but they’re also speaking universal human stories
and experiences.

Because human behaviors have an evolutionary logic and an evolutionary history they lend themselves to evolutionary analysis. Rap just seems to work very
well for that because it’s a sequence of brash statements that can be used as signposts to understand what are the agendas and strategies of the organisms
in questions—which in this case happens to be rappers.

Kylie: What happens with audiences who are less than open to the scientific side? Not everyone’s going to be pro-evolution, as it were. What’s been the outcome
when you’ve had audiences who question or might be even out rightly antagonistic to your message?

Baba: It’s been mixed! I haven’t had a hostile takeover or been shouted down in the midst of a show but I have had strong negative feedback from the
creationist side because the show’s very pro‑evolution and pro‑Darwin.

I’ve built a mechanism into the show, which is like a pressure release valve or something. It’s at the end of each show I ask the audience for feedback. I
make the point that the audience feedback is really the crucial function that allows artists to evolve their craft because without audience feedback you
wouldn’t have any directional sensibility about how to change or improve what you’re doing.

The twist is, of course, that I’m not going to uncritically absorb all feedback. I’m just going to take all feedback into consideration. If I don’t think
it squares with the evidence or is a good, logical argument than I might just end up making fun of it instead of absorbing it. I’m hoping to hear
everything!

At the time, right now, we’re in the midst of filming a documentary that is going to be about half finished when I come to Australia. The documentary
follows the show on tour in the American South. We’ve been to Mississippi and we’re going to Tennessee, Alabama, and Texas.

We’re going to take the show to where it’s going to be the most controversial and have conversations with people about what kind of reaction they have and
whether it’s helped them to move forward in terms of accepting, understanding, or being open to evolution as a concept.

Kylie: Fascinating. As you said, you’re heading to Australia in May. What are some of the other projects that you’re working on in the future?

Baba: I’m excited to be hitting up all these venues all across Australia. While I’m touring Australia I’m also going to be working on writing some new stuff.
When I started doing “The Rap Guide to Evolution,” I originally conceived of it as a trilogy where the first one would be about evolution. The second one
would be about human nature and psychology. The third one would be about religion. I’m actually zeroing in on that now.

I’m working on “A Rap Guide to Religion,” which is going to premiere in August at the Edinburgh Fringe Festival. That seems to be the main motive for
people to be disinterested or to reject the science. It also seems to be a source of a lot of disagreements and conflicts in the world.

I’m interested in the evolutionary view of where religion comes from as a behavior and how can you understand religion from an evolutionary standpoint,
which it turns out you can. There’s a whole thriving field, evolutionary religious studies. That’s going to be one of my next shows!