On September 18, 2019, a video titled “2019 Real UFO Sighting” was uploaded to YouTube by William Guy, an Indiana man working on Ocracoke Island, North Carolina. The video, which is thirty seconds long, shows fourteen bright yellow lights clustered together hovering in the sky. It didn’t take long for the video to go viral, and as of this writing, the video had over 1.5 million views, with almost 1,900 comments. 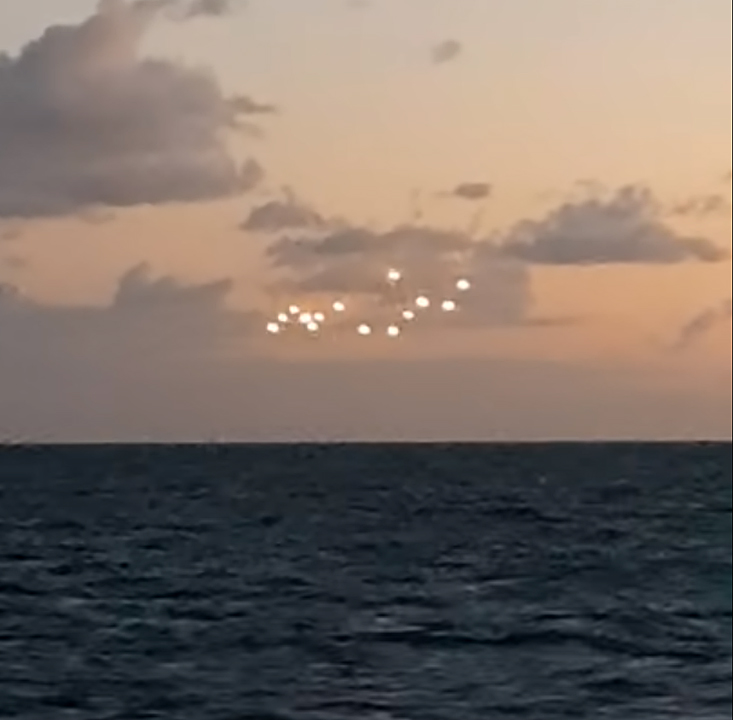 In the video, we see a beautiful scene of the evening sunset, and then we hear Guy asking “Anybody tell me what that is? We’re in the middle of the ocean, on a ferry, nothing around. No land, no nothin’” (Guy 2019). As the cameras pans across the scene, it settles on fourteen bright yellow lights that don’t appear to move noticeably. According to a comment from Guy on his YouTube channel (where the video is posted), he filmed the clip while aboard a ferry crossing the Pamlico Sound lagoon, heading to Swanquarter, North Carolina, from Ocracoke Island. In the background, we can hear an unidentified man say, “You only see this stuff on TV,” with a female responding, “I know!”

So, are we looking at UFOs? I doubt it, but let’s take a closer look and see what we can uncover. First, we should recall that “UFO” is short for “Unidentified Flying Object”—not aliens or their spacecraft. It just means those viewing the object cannot identify it, at the time and under those conditions. To Guy and the people we hear in the video, they could not identify the objects, thus to them, they were looking at unidentified flying objects (UFOs). However, Guy makes the common mistake of assuming these lights are the pop culture meaning of UFOs: alien spacecraft. He also apparently didn’t investigate the matter any further than the short video clip he posted. All of this is evident in the title he gave it, “Real UFO Sighting.”

Although the video is thirty seconds long, the floating lights are only on screen for thirteen seconds—less than half of the video. Guy turns the camera left and right, an attempt to show viewers he is in the middle of the ocean. As it turns out, the ferry Guy is traveling on is not “in the middle of the ocean”; it’s in the Pamlico Sound lagoon, situated between the North Carolina coast and the Outer Banks. Google Maps provides the route the ferry takes, via a dotted line (as long as you’re zoomed in enough). This is important information, because it tells us the ferry was heading to the mainland (west/northwest). The last frames of the video give us a glimpse of the front of the boat (bow), indicating Guy was standing on the port (left) side and facing a southwest direction. Not only is he not in the middle of the ocean, he’s not even looking toward the ocean; he’s looking at the coastline of North Carolina.

Directly in his viewing direction are two military bombing ranges; BT-11 and BT-9. BT-9 Brant Island Shoal (R-5306A) is a small island approximately nine miles southwest of the route the ferry takes across Pamlico Sound. This is a mining exercise area with targets that consist of a “sunken freighter hulk and two sea-going tugboat hulks grounded on Brant Island Shoals. Night lighting by means of MK 24 or MK 25 air-delivered flares is authorized” (GlobalSecurity.org 2019a). BT-11 Piney Island is a 10,000-plus-acre electronic practice range approximately eighteen miles southwest of the ferry’s route, on the eastern tip of Carteret County. The use of night lighting by means of air-delivered flares is also authorized here as well (GlobalSecurity.org 2019b). 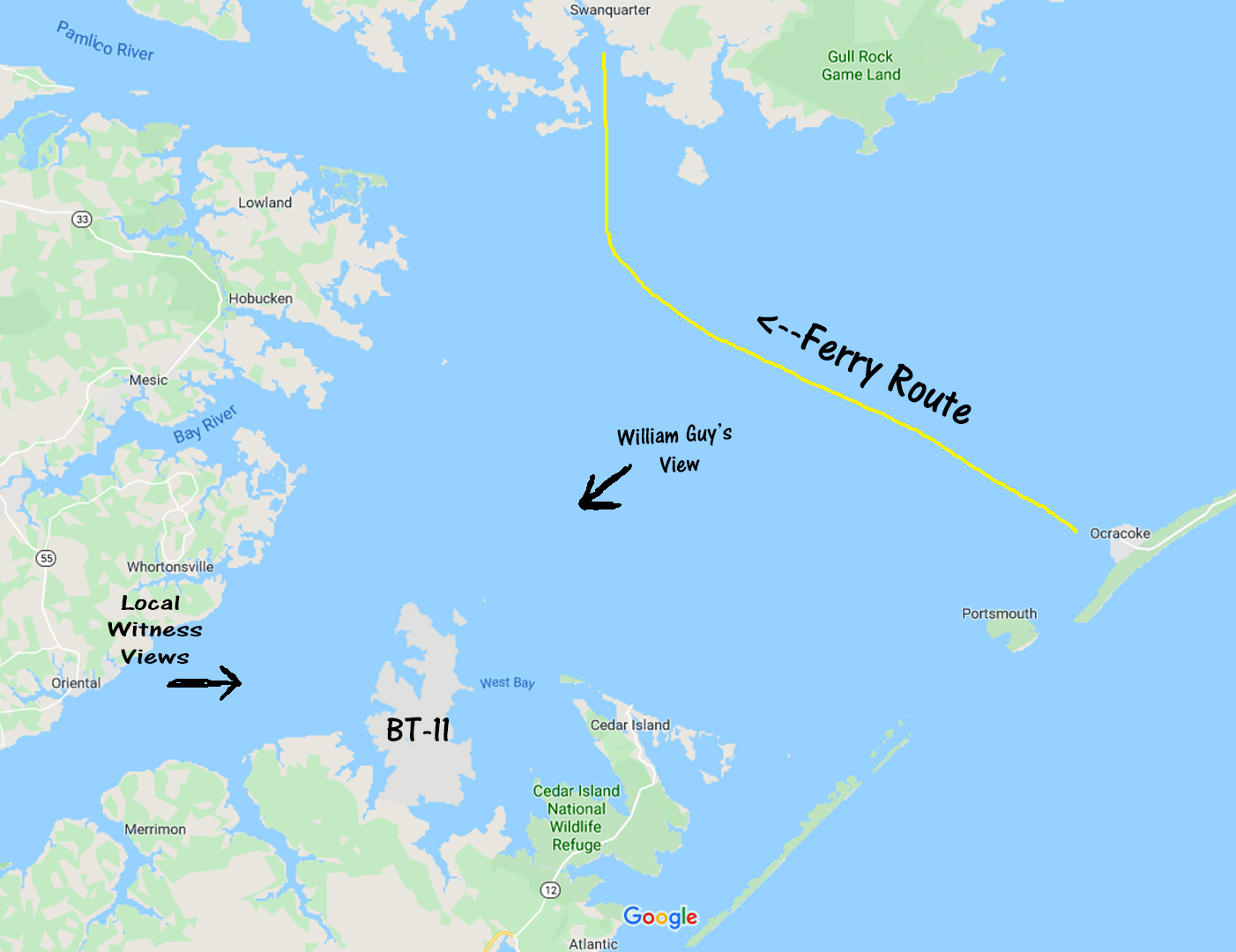 When asked why the video was only thirty seconds, Guy responded, “Sorry it was short, had to edit it down, it wouldn’t let me share the whole video but it was only about a min and half long but they disappeared but came back about 2 minutes later then one by one they disappeared” (Guy 2019). Knowing there was more to the video, many commented and demanded Guy post the entire video. After stating he would try, Guy has yet to upload the full video.

Although it would be nice to see the whole thing, we really don’t need to. The description of events gives us the details we need to determine the most likely cause: MK 24 flares. The location of the bombing ranges, the short burn time of the flares, the brightness, and even the reappearance and subsequent “disappearing one by one” a few short minutes later all points to illumination flares being the cause.

While browsing the plethora of comments, I found quite a few from retired veterans that are quite familiar with these flares. For example, Derrick Chennault commented, “William, nice vid. As your vid on the news reads you were on a ferry off the coast of North Carolina and facing towards Pamlico Sound I am pretty sure I know what those lights are. As a former Marine based at the 2nd Marine Air Wing in Cherry Point, N.C. And flight crew Sgt. on the C-130 squadron VMGR-252. We used to regularly drop flares out of the back of our plane in the evenings for military exercises in that area. They are one million candle power each so they were pretty bright and can be seen from far away and floated down slow as they hung from a parachute. When we would fly back to base in Havelock N.C. We would watch the news and people called in to say they sited UFO’s in the area. Locals in that area all know that goes on. I’m pretty sure the ferry captain knew too. When I did this, it was from 1976–1980. Glad to see the Marines are still spooking people. Have fun and keep looking.”

In addition, TownDock.net, a website about local events and news in Oriental, North Carolina, reported on September 19 that residents also witnessed the lights the day before, the same day Guy filmed his viral video. The locals also sent in clearer images, showing the yellow burning flares and the trails of smoke as they drifted down. Resident Steve Elbert said, “Last evening about 7:30 we noticed what appeared to be a formation of lights that were located east of Oriental. We live on Smith Creek and the lights seemed to be north of the water tower and maybe over Straight and White Farm roads” (Towndock.net 2019). Drawing a line from their residence to through the streets mentioned, it points directly at Bombing Target 11 on Piney Island. Diann Landow, another resident wrote in, “We saw the lights last night from Maribel / Bay River looking east. We noticed 2 separate drops of flares about 10 minutes apart at approximately 7:30 pm.” Again, this points directly at BT-11 on Piney Island. Landlow’s statement also matches Guy’s statement that the lights disappeared, came back, then disappeared again for good. 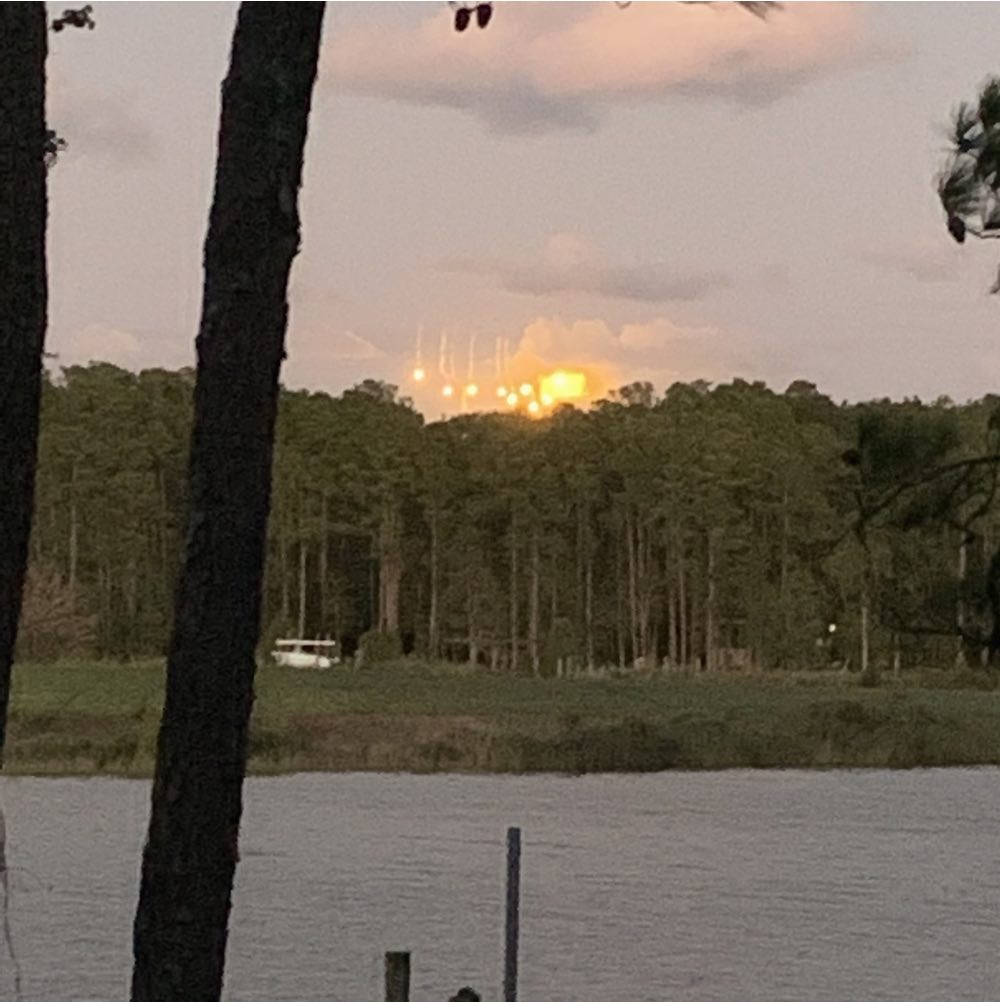 William Guy was in North Carolina helping to repair the damage caused when Hurricane Dorian hit the area in August 2019. He’s from Indiana and likely just didn’t know what he was looking at. In addition, he didn’t know the area, so he wasn’t aware of which direction he was looking or what was in the surrounding area. Unfortunately, he jumped the gun by labeling his video as a “real UFO sighting” before knowing what he filmed. When we follow the evidence, we find that he took video of parachute flares dropped from aircraft over a military bombing range. No alien fleet required.