Ghosts are big business. For entities that may or may not exist, they seem to be everywhere, especially during Halloween. They are in books and on television shows, such as CBS’s The Ghost Whisperer and NBC’s Medium. Dozens of “ghost hunter” organizations exist across North America, small groups of self-styled ghost buffs who lurk around reputedly haunted places, hoping to glimpse or photograph a spirit.

The most famous ghost hunters are two plumbers who moonlight as paranormal investigators, seen in the popular Sci-Fi Channel reality show/soap opera series Ghost Hunters. They go to haunted places and find “evidence” of ghosts such as cold spots, photographic anomalies called orbs, and other such spookiness. The two featured investigators, Jason Hawes and Grant Wilson, are proudly blue-collar workers, not egghead Ph.D. scientists, which adds to their strong “regular guy” appeal. While one doesn’t need to be a scientist to search for ghosts, the pair (like most ghost hunters) could benefit greatly from a little critical thinking. They claim to be skeptics but are very credulous and seem to have no real understanding of scientific methods or real investigation. (Audiences don’t seem to wonder why these “expert” ghost hunters always fail: Even after two seasons and over ten years of research, they still have yet to prove that ghosts exist!)

Though most ghost investigators’ worst crime is wasting time, sometimes they make nuisances of themselves and even break the law. In October 2005, three ghost hunters in Salem, Massachusetts, were arrested for trespassing on private property in search of ghosts. They had entered an abandoned hospital reputed to be haunted. The group was so busy looking for spirits they failed to notice the police station across the street; all three were arrested, fined, and sent home. Trespassing or vandalizing ghost hunters have also been arrested in cemeteries in Illinois, Connecticut, and other states.

When it comes to searching for ghosts, you’d think that only the most reliable methods would be used in an attempt to get solid evidence for something as mysterious and elusive as a spirit. Yet, in ghost hunting, often the less scientific the methods and equipment, the more likely a researcher is to find “evidence” for ghosts.

Ghost hunters use a variety of creative—and dubious—methods to detect their quarry’s presence, including psychics. Psychics not only claim to locate ghosts but also to communicate with the spirits, who unfortunately don’t provide any useful or verifiable information from the afterlife. Virtually all ghost hunter groups claim to be scientific, and most give that appearance because they use high-tech scientific equipment such as Geiger counters, Electromagnetic Field (EMF) detectors, ion detectors, and infrared cameras. Yet the equipment is only as scientific as the person using it; you may own the world’s most sophisticated thermometer, but if you are using it as a barometer, your measurements are worthless. Just as using a calculator doesn’t make you a mathematician, using a scientific instrument doesn’t make you a scientist. 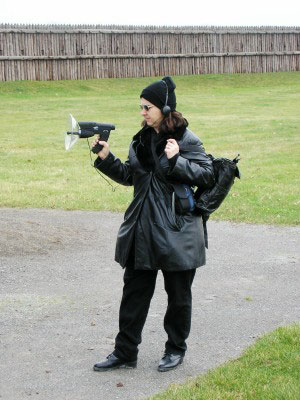 Figure 2. A ghost hunter uses a sensitive microphone, attempting to record ghostly sounds during an investigation in Ontario, Canada.

In 2003, while I was investigating a haunted house in Buffalo, New York, the owner of the house asked me what equipment I planned to use. He had glanced in my duffel bag, which contained two cameras, a tape recorder, notebooks, a tape measure, a flashlight, and a few other items. Perhaps he was expecting to see a Negative Ionizer Ghost Containment backpack like the kind Bill Murray wore in Ghostbusters.

An EMF meter is among the most common devices used by ghost hunters today. I spoke to Tom Cook, of TomsGadgets.com, a British purveyor of “scientific” paranormal kits for the enterprising (and gullible) investigator. Starter kits begin at 105 [pounds sterling] (US$180) and reach up to 500 [pounds sterling] (US$850) for a custom ghost-hunting kit. (Negative Ionizer Ghost Containment packs were not listed.) I asked him what, exactly, the scientific rationale was behind the equipment he sold. He replied, “At a haunted location, strong, erratic fluctuating EMFs are commonly found. It seems these energy fields have some definite connection to the presence of ghosts. The exact nature of that connection is still a mystery. However, the anomalous fields are easy to find. Whenever you locate one, a ghost might be present…. any erratic EMF fluctuations you may detect may indicate ghostly activity.” In the final analysis, Cook admitted, “there exists no device that can conclusively detect ghosts.”

The uncomfortable reality that ghost hunters carefully avoid—the elephant in the tiny, haunted room—is of course that no one has ever shown that any of this equipment actually detects ghosts. The supposed links between ghosts and electromagnetic fields, low temperatures, radiation, odd photographic images, and so on are based on nothing more than guesses, unproven theories, and wild conjecture. If a device could reliably determine the presence or absence of ghosts, then by definition, ghosts would be proven to exist. I own an EMF meter, but since it’s useless for ghost investigations—it finds not spirits but red herrings—I use it in my lectures and seminars as an example of pseudoscience. The most important tools in this or any investigation are a questioning mind and a solid understanding of scientific principles.

The ghost hunters’ anti-scientific illogic is clear: if one area of a home is colder than another, that may indicate a ghost; if an EMF meter detects a field, that too may be a ghost; if dowsing rods cross, that might be a ghost. Just about any “anomaly,” anything that anyone considers odd for any reason, from an undetermined sound to a “bad feeling” to a blurry photo, can be (and has been) considered evidence of ghosts. I was even at one investigation where a ghost supposedly caused a person’s mild headache. Because the standard of evidence is so low, it’s little wonder that ghost hunters often find “evidence” (but never proof) of ghosts.

The whole idea of ghosts runs into trouble as soon as a little logic is applied. There’s not even agreement on what ghosts are—or might be. A common claim is that ghosts are spirits of the dead who have been wronged or murdered. Let’s inject some real-world statistics into that assumption and see what we get. If murder victims whose killings remains unsolved are truly destined to walk the earth and haunt the living, then we should expect to encounter ghosts nearly everywhere. According to the Bureau of Justice Statistics, roughly a quarter of all homicides remains unsolved each year. (In fact, fewer homicides are solved now than in the past; in 1976, 79 percent of homicides were cleared, down to 64 percent in 2002.) There are about 30,000 homicides in America each year. Using the most recent numbers, that’s about 11,000 unsolved murders per year, and 110,000 over the course of only ten years, and probably well over a million over the course of the twentieth century in America alone. Where are all the ghosts?

And why aren’t they helping to bring their killers to justice, with so many crimes unsolved? Why would they hang out in scary mansions instead of directing police to evidence that would avenge their murders? For that matter, why are ghosts seen wearing clothing? It’s one thing to suggest that a person’s spirit has a soul that can be seen after death; but do shoes, coats, hats, and belts also have souls? Logically, ghosts should appear naked. The fact that they don’t suggests that people’s ideas of what ghosts are—and what they look like—are strongly influenced by social and cultural expectations. (For an excellent discussion of this, see Richard Finucane’s book Ghosts: Appearances of the Dead & Cultural Transformation.)

If ghosts exist, why are we no closer to finding out what they really are, after so much research? The evidence for ghosts is no better today than it was a year ago, a decade ago, or a century ago. Ultimately, ghost hunting is not about the evidence (if it was, the search would have been abandoned long ago). Instead, it’s about having fun with friends, telling ghost stories, and the enjoyment of pretending you are searching the edge of the unknown. (It’s also about making money selling Ghost Hunters T-shirts, books, and videos.) Ghost hunters may be spinning their wheels, but at least they are enjoying the ride.