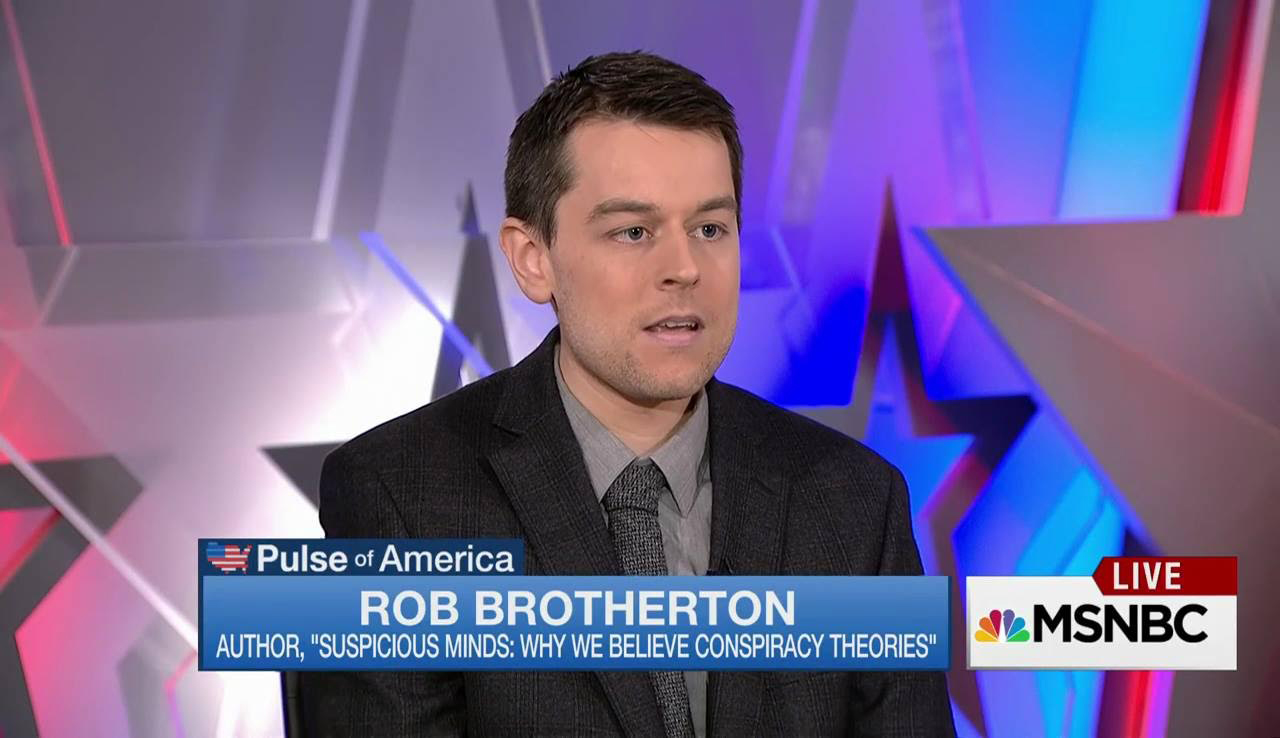 Rob Brotherton is an author and professor at Barnard College in New York City. He has a PhD from Goldsmiths University of London; his thesis was on the psychology of conspiracy theories. He will be speaking at CSICon on Saturday, October 28 at 2:30 p.m. For more information about Rob, find it here https://conspiracypsychology.com/.

Susan Gerbic: Rob, so nice to meet you. I see you are interviewed all over the media from MSNBC to Breitbart. Conspiracy theories seem to be a hot topic these days. Your 2015 book Suspicious Minds – Why we Believe Conspiracy Theories https://conspiracypsychology.com/2015/11/02/suspicious-minds-why-we-believe-conspiracy-theories/ is pretty timely. When you wrote this, you had no idea that the president of the United States would be someone who would spout this rhetoric. What a wild and crazy world we find ourselves in right now.

Rob Brotherton: Right. The Breitbart thing still tickles me. I’d written about the history of the Illuminati, how it became connected with hip hop for the Daily Beast, and Breitbart put up an article about it wildly misconstruing what I wrote—basically implying that I’d revealed Kanye West to be part of the Illuminati. Breitbart publishes misleading, clickbait stories—who knew?

Gerbic: You mean Kanye West isn’t a part of the illuminati? Can you tell readers a bit more about yourself? Why is the topic conspiracy theories your area?

Gerbic: It’s possible that people think that a belief in conspiracy theories is harmless; I’m thinking of the moon landing and lizard people in the government. Obviously, these aren’t exactly harmless as they fuel a mistrust of society around them. But they appear to be harmless compared to the false flag Sandy Hook theory (one of the fathers, Lenny Pozner, was a believer in conspiracy theories right up until the moment his son became a victim; he even was listening to Alex Jones the morning he dropped his son off at Sandy Hook) and Timothy McVeigh who believed the government instigated the Waco siege; his mistrust in the government eventually led him to bomb the FBI building in Oklahoma City.

Brotherton: Yes, there are those two reasons for concern. There are the rare but startling instances in which individuals are driven to extreme acts seemingly in large part thanks to their belief in a conspiracy. There was McVeigh, as you mentioned, or more recently Edgar Welch, the guy who went to investigate the Pizzagate conspiracy theory with an automatic rifle, though thankfully he didn’t hurt anyone. And then there are the broader but less tangible consequences, like choosing not to vaccinate your kids, take action against climate change, participate in the political process, or being generally distrustful. As far as the psychological research goes, studies do find that exposure to conspiracy theories can breed alienation. But it’s also likely that it goes in the other direction, too—that conspiracy theories resonate most with people who are alienated to begin with. So it’s likely a vicious cycle where alienation promotes conspiracism, which reinforces alienation, which promotes conspiracism, and so on.

Gerbic: Conspiracy theories have been with us for years, I remember reading that people didn’t believe that John Wilkes Booth assassinated Lincoln. I naively believed that when people had access to better information in a timely manner they would be less likely to believe in conspiracy theories. Is there any hope for our society? Is this just something we are going to have to learn to deal with?

Gerbic: You will be speaking at CSICon in Vegas this year. Can you give us a glimpse into what you will be talking about?

Brotherton: The talk will be a whistle-stop tour of the highlights of the last decade or so of research into the psychology of conspiracy theories. I’ll focus on how some of the biases and shortcuts our brains use to make sense of the world that can make conspiracy theories seem appealing.

Gerbic: You spoke in 2011 at a conference in London called “Conspiracy Theory Day” and again in London in 2013 at the “Nine Worlds GeekFest.” CSICon sounds like it will fit right in; what would you say if someone said you are just speaking to the choir?

Gerbic: Okay, so now I need to know, what’s your favorite conspiracy theory?

Brotherton: I love the idea that the Illuminati is manipulating us via pop culture—I do an entire talk on references to the Illuminati in hip hop, if anyone is interested! But my favorite has to be David Icke, the British conspiracy theorist who weaves absolutely everything into a grand conspiracy narrative. I mean everything. I’ve been to a couple of his talks, and they last all day, eleven or twelve hours. He explains how the rings of Saturn are a radio transmitter and the moon is a hollow amplifier, beaming mind control rays down to Earth so that the evil Archons—his famous interdimensional shapeshifting lizards—can keep us trapped in their holographic reality. It’s great sci-fi. The only difference is that David Icke says it’s true, but I’m not convinced.

Gerbic: What’s next for Rob Brotherton? It seems that there is so much to work to do to educate about conspiracy theories that its almost overwhelming.

Brotherton: No kidding. I’m still researching conspiracy theories from different angles. My book was really the start of a conversation, not the end. I thought it was time to collect the early findings together in one place and get the message out that this is an interesting and important thing to study. But the research that’s been done so far is just the tip of the iceberg. There’s still a lot of work to be done.

Gerbic: Folks, please join us at CSICon this year held at the Excalibur Hotel & Casino October 26–30, 2017. Join the Facebook page to get updates on where people are hanging out and what outside activities are happening. This isn’t only about attending interesting lectures but about meeting and interacting with like-minded people. Go for the speakers; return for the people. Trust me on this.