“Science is nearly never accurately represented when reported on by the news… This movie sets out to illustrate how and why the media gets science so horribly wrong.”

If you are attending CSICon 2019 but plan on leaving Vegas early—on Saturday night or early Sunday—not only will you miss the annual Sunday Papers session, but this year there is one additional very special event you’ll miss out on as well. If you haven’t made your return travel plans yet, you seriously might want to take this into account. Immediately following the last, official event of CSICon, there will be a private screening (it’s free, but reservations are required) of the eagerly anticipated, crowd-funded, Skeptoid Media documentary Science Friction, produced by Brian Dunning and directed by Emery Emery.

What is this film about? In short, it’s about scientists and skeptics being misrepresented by the media. This issue strongly resonates with me, because just a year ago I had the personal experience of being misquoted in a national magazine article. My efforts to have the error corrected fell on deaf ears. My speculation is they just didn’t care to get it right or were just too busy to be bothered; I don’t believe there was any nefarious intent. But whatever the reason, something that I did not say is now a permanent part of the public record. Ironically, this happened in an article that was about the importance of getting the facts right!

If this type of thing can happen when there is no motive to purposely distort the truth, can you imagine what level of misrepresentation of people and facts occurs when there is a strong motive? Can you imagine what it’s like to be a scientist who participates in a fringe documentary, providing a counterpoint to a nutty idea, only to see their words edited out of context in the released version, making it look like they actually support the very nonsense they were attempting to counter?

I, for one, am looking forward to Science Friction shining a white-hot spotlight on this type of egregious, intentional misrepresentation of the truth concerning subjects that skeptics hold dear.

Rob Palmer: Please explain what your Science Friction documentary is all about.

Emery Emery: Science is nearly never accurately represented when reported on by the news. This problem has led to the anti-vaccination movement, flat-earth movement, moon landing deniers, and climate change deniers. And the list goes on and on. This movie sets out to illustrate how and why the media gets science so horribly wrong.

Palmer: I always appreciate cleverly named titles … So, who gets credit for this film’s name?

Emery: As odd as it sounds, that’s not an easy question to answer. The answer is a bit complex. I actually came up with the name for the movie because I was losing my mind over the fact that Brian Dunning had decided that the film should be titled Dark Discoveries. That title was making me crazy, and rather than just complain, I decided to come up with a title that Dunning just couldn’t reject.

So, being of relatively sound mind, Dunning agreed that my title was many times better than his, and so we decided to go with Science Friction. After we had the website nailed down, a logo, and everything else you have to do to prepare for a new title, someone pointed out that there was a book written by Michael Shermer also titled Science Friction. Well hell!

Palmer: What was the genesis of doing a documentary on this subject?

Emery: I don’t know if it was Adam or Eve who came up with the idea originally, but I suspect the snake put the idea in Eve’s head, who then passed it on to one of her children, who then passed it on to one of their children, and so on until it eventually made its way into Brian Dunning’s mind. I don’t have any proof of this unbroken lineage, but if you could just take it on faith that I didn’t completely make this story up, I’d really appreciate it.

Palmer: Hmmm … seems you took the use of “genesis” in my question literally. Okay, can you tell me how many cases of false attribution, disingenuous editing, and the like will be covered?

Emery: This is a hard question to answer as we aren’t finished with filming yet, but I suspect we will be in the neighborhood of eight to a dozen.

Palmer: One of the most egregious cases of this sort I know about—and which I hope gets covered in your film—concerns actress Kate Mulgrew (Capt. Janeway of Star Trek Voyager) being used to narrate a 2014 documentary, The Principle, which proposes that the old geocentric model of the universe is correct. Apparently, Mulgrew’s narration script did not reveal the film’s subject matter, and she was shocked when the documentary trailer was released revealing the full context of the film. I recall there was quite a bit of consternation on social media about this. But I understand that efforts to have Mulgrew participate in your project were unsuccessful. Will this case be covered anyway?

Emery: You are correct in that we were unsuccessful in our attempts to land an interview with Ms. Mulgrew. To date, we don’t have anyone speaking specifically about her experience, but that doesn’t mean we won’t find someone. We will just have to leave this one as a hopeful cliffhanger in your article.

Emery: I approached a producer who very much wanted to be interviewed but did not want to risk doing damage to his/her/their career. So, I pitched the idea of shooting him/her/them in silhouette much in the same way you see interviews with mob bosses or mob rats. This idea appealed to him/her/them, so if I can get that interview, I will. It’s still not in the can, but plans to do so are in the works. Fingers crossed. (Crossing fingers in hopes of changing the outcome has no basis in science, and therefore should not be expected to play a role in the potential outcome of that interview.)

Palmer: On the flip side, did anyone who was misrepresented contact you folks and ask to be included?

Emery: Absolutely! I can’t give away who fits into this category for a number of complex reasons, but suffice it to say that we had a number of interviewees who were very eager to talk to us.

Palmer: Emery, so what is your film and skeptical background, and how did you get involved in this project?

Emery: I’ve been in film production since editing The Aristocrats. Dunning knew of my most recent work, Gamblers Ballad: The Legend of Johnny Thompson, and he also knew I was the host of Skeptically Yours, a podcast I did with Heather Henderson for many years.

Palmer: Brian, can you compare the difficulty of completing this project to the other two Skeptoid Media films, Here Be Dragons and Principles of Curiosity?

Brian Dunning: All very different projects. Here Be Dragons was just something I made on my own in iMovie before Skeptoid Media even existed. Even though Science Friction is a full feature documentary and Principles of Curiosity was a much shorter (forty minute) educational film, Curiosity was the bigger project. A much larger crew, more locations, crazy logistics, directed by Ryan C. Johnson who also collaborated with me on The Skeptologists pilot. The biggest difference is that since Science Friction is interview based; we don’t have a script to work from and we don’t know where the story leads until we’ve interviewed everyone. Unlike the dishonest practices our film calls out, we didn’t go into it with a predetermined conclusion. This type of environment is where Emery really shines.

Palmer: I know that this is a crowdfunded project. Please tell me a bit about that aspect of things.

Dunning: All our projects are funded by private-grants and donations from people who believe in the importance of our work and want to make sure it’s available to anyone. As an educational nonprofit, our promise is that everything we do will make it to classrooms. It’s critical that regardless of whatever commercial distribution we get for the film, the educational rights will remain ours to share with our audience forever. So, we did not seek investor capital, but instead followed our mission.

Palmer: Tell me about the premiere scheduled for the last day of CSICon 2019, including how this showing came about, and what people need to do to register to attend. Will the film be completed by that time?

Dunning: It’s not a premiere so much as a private-screening limited to CSICon attendees and our donors. It remains to be seen how close the rough-cut will be to completion, but there will be more than enough to really blow your hair back. The practices we uncovered surprised even us. Emery and most of the producers should be there for some Q&A and conversation. You will need to RSVP as seating is limited, and you can do so at skeptoid.org/events.

Palmer: I understand that one individual (can you say who that was?) paid the entire cost of the Flamingo room-rental once the screening was announced, so the entry fee has been covered for everyone wanting to see the film. How did that happen?

Dunning: Yes, one of our producers, Daniel Murphy, was awesome enough to sponsor the screening. Without his help, we would have had to charge something just to cover the cost of the room! And we didn’t feel that was fair to people who had already dug deep to make the film happen. Murphy plans to be there, as well, to talk about that. 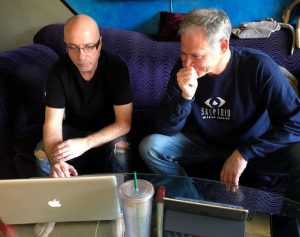 Palmer: What is the film’s distribution plan, including the education angle?

Emery: It’s far too early to answer this question. Obviously, we are hoping to get some sort of distribution deal, but we don’t have anything lined up at the moment. We will start that process sometime around October when we have a rough-cut ready.

Palmer: And finally, what is the next Skeptoid Media project?

Dunning: Always something! The most interesting project we’re considering is a series for PBS. Skeptoid Media is lucky to be located in the Pacific Northwest, home of OPB [Oregon Public Broadcasting], the nation’s second largest producer of public broadcasting content. We’re still looking at concepts that meet the requirements of PBS audiences and that keep our central mission of critical thinking at the core. But I also have another forty-minute film outlined that I love to death. We’ll just have to see which one gets to the starting line first!

All photos are courtesy of Skeptoid Media except as noted.

Other Articles from The Well-Known Skeptic