Brazil is considered a developing country with substantial levels of poverty, yet São Paulo, the largest city in South America, is a sophisticated modern metropolis and home to the largest university in South America. Because citizens are guaranteed healthcare as a constitutional right, Brazil operates the largest national healthcare system in the world, and Brazilian mothers receive four months of paid maternity leave. As a result, although Brazil faces many daunting social and economic challenges, Brazilians can be proud of much more than just soccer and samba.

When it comes to knowledge and acceptance of science, the message is similarly mixed. For example, according to a recent national survey (see Figure 1; Orsi 2019), Brazilians have a very high regard for the importance of vaccination, and fully 87 percent believe that global warming is caused by humans and produces severe effects. But other areas are more concerning. For example, 83 percent of Brazilians believe that alternative medicine methods are a “good option to treat disease”; 73 percent believe genetically modified organisms are harmful; and 66 percent believe spiritual energy can heal. Although it is less of an issue from a policy point of view, 31 percent believe aliens have visited ancient civilizations on earth.

Homeopathy is a particularly urgent concern because it is offered by doctors through the national healthcare system. To make matters worse, medical ethics rules in Brazil make it very difficult for one physician to publicly criticize another one without potentially losing their license to practice medicine. Norms of “professional courtesy” may be construed as impeding the criticism of another doctor’s legally recognized specialty, even if that specialty is homeopathy. As a result, many doctors in the national healthcare system prescribe homeopathic medicines free of any pushback from fellow physicians who support evidence-based methods. Fully twenty-nine unsupported alternative medicine techniques are allowed and paid for by the national healthcare system. To make matters worse, government science funding in Brazil has been cut in half in recent years (Mega 2019).

But all is not lost. Recently, a vigorous group of Brazilian scientists and science communicators have formed an organization aimed at bringing the light of science and reason to bear on the kinds of pseudoscience and superstition found in their part of the world. On November 22, 2018, the Instituto Questão de Ciência (IQC; Question of Science Institute) launched in São Paulo, and in less than a year they have conducted a dizzying schedule of activities, launched the journal Revista Questão de Ciência, and established a formidable response to all manner of Brazilian pseudoscience.

The Question of Science Institute is led by its president, Natalia Taschen Pasternak, a research fellow at the Institute of Biological Sciences at the University of São Paulo and one of the most energetic people I have ever met. Prior to starting IQC, in 2015 Pasternak cofounded the Brazilian version of the Pint of Science, and by 2019, eighty-nine Brazilian cities were participating. She has established many connections with journalists in Brazil and does frequent public events, speaking on behalf of science in discussions of homeopathy and other unfounded beliefs. The other members of the board of directors of IQC are:

In addition to this core group, IQC has an eleven-member advisory committee with representation from medicine, physicists, chemistry, biology, and philosophy and has a large number of active members. Finally, IQC is represented on all the most important social media platforms, including Twitter (1,700 followers), Instagram (7,000 followers), and Facebook (18,000 followers), and in less than a year, their content has garnered over five million views.

Throughout their first year, the IQC has maintained a rigorous schedule of events. For their launch in 2018, IQC invited renowned expert on homeopathy and alternative medicine Edzard Ernst to give a public lecture, but that was just the beginning. A selection of some of their other events includes:

In August 2019, I was honored to be invited by IQC to give a series of talks in São Paulo. Before I arrived, IQC published Portuguese translations of a few of my Skeptical Inquirer articles on the institute’s website, and drawing upon her many contacts with science journalists, Pasternak had arranged for me to do a number of interviews the first day I arrived. These resulted in articles in several newspapers, including Scientific American Brazil and Folha de S.Paulo, the largest newspaper in São Paulo.

On my second day in Brazil, I visited the University of São Paulo (USP), to give the first in a series of lectures on the topic, “The Epistemology of Ignorance,” cosponsored by IQC and the university’s Institute of Advanced Studies. My talk was titled “Why People Believe What They Believe,” and it was attended by scientists and scholars from a wide range of disciplines. (A video of my talk can be found here.)

On my third day, I returned to USP to give a three-hour workshop for psychology graduate students and faculty on the relationship between science and clinical psychology. My lecture covered some of the material I have reported in this column on the use of the discredited therapy facilitated communication. (A video of the workshop can be seen here; however, due to a technical problem, there is no audio for the first half hour of the workshop.) 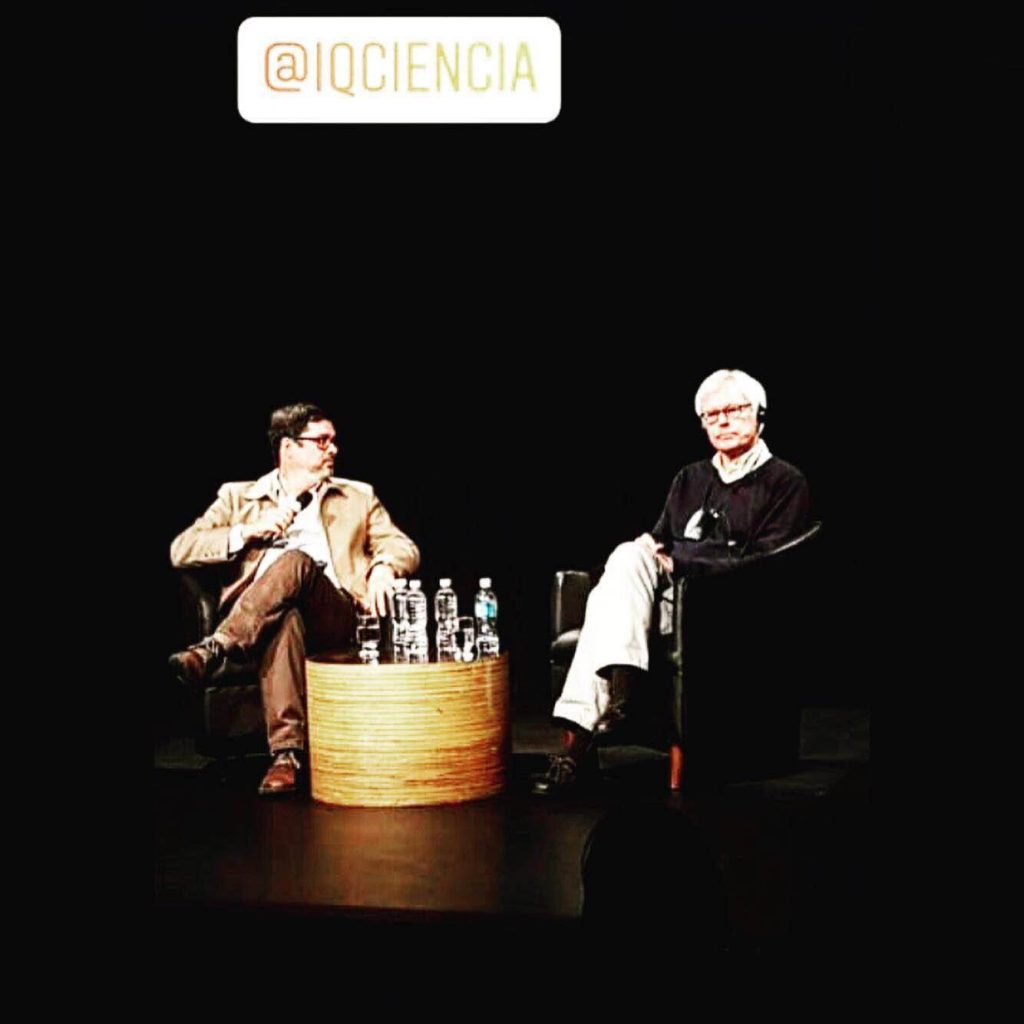 The question and answer period of a talk by the author in the auditorium of a downtown São Paulo bookstore. Carlos Orsi (left), the communications director of IQC, served as emcee.

Finally, on a Saturday morning I gave a public talk on the psychology of superstition in an auditorium inside a large bookstore in downtown São Paulo. This event was entirely organized by the IQC, who arranged for simultaneous translation for anyone whose English was not adequate to understand me. During the question and answer session that followed, I heard a second translator in my headset, turning the questions that had been submitted by the audience in Portuguese into English that I could understand. It was a wonderful event attended by a large crowd.

I came away from the experience incredibly impressed with what Pasternak and her band of science advocates have established in such a short time. In addition to the public events they have created or participated in, IQC produces a remarkable stream of written material through their online magazine and website. Many of these articles are written by Carlos Orsi, but IQC also recirculates useful science-based publications from other sources. Of course, all of this content is widely disseminated through social media to maximize its impact. Finally, although IQC is based in Brazil, Pasternak has made numerous connections with skeptics all over the world, including Barry Karr and Susan Gerbic of the Center for Inquiry.

Brazil is a very large country that poses many challenges for those who champion science and reason, but if it is possible to make a difference, I am confident the intrepid Natalia Pasternak, the brilliant Carlos Orsi, and the other members of IQC’s band of science advocates are the ones who can do it. Whenever skepticism blooms it is a joy to see, but the emergence of IQC in Brazil is a particularly exciting development. Viva a ciência e a razão no Brasil!