In continental Europe and particularly in Brazil, a branch of Spiritualism called Spiritism is developing and evolving into a new religion.

We have all seen old Victorian illustrations of ghosts as white sheets of cloth and poorly faked photos of spirits created by double exposure, mainly resulting from the Spiritualist movement in Britain and the United States. The movement saw its peak at the end of the nineteenth century, and it’s mostly recognized as a fad today, almost a century later.

In some other countries, however, especially in continental Europe and particularly in Brazil, a branch of Spiritualism called Spiritism is still very relevant and evolving, making it a fascinating example of the development of a new religion. Followers will be quick to emphasize the distinction between the more widely known Spiritualism and Spiritism, which was founded by a Frenchman named Hypolite Rivail (1804–1869) under the pseudonym “Allan Kardec.” This fad, or fallacy, is being promoted in the name of science.

According to the Brazilian Institute for Geography and Statistics (IBGE), which conducts the official census, Brazil has the largest number of Spiritists in the world: over 2.3 million followers, around 1.3 percent of the total population and the third largest religious group, behind Catholics and Evangelicals[1].

All three groups are Christian; the Brazilian Spiritists give special relevance to “The Gospel According to Spiritism.” The most important leader of this movement in Brazil, Francisco “Chico” Xavier (1910–2002), is our main focus of interest here because he epitomizes Brazilian Spiritism.

Chico Xavier is said to have been a medium. His main form of mediumship, however, was “psychography,” that is automatic writing by which he claimed to contact the dead in the form of letters from the deceased and also new books by deceased famous authors.

By selling these “psychographed” books, of which Xavier is said to have authored nearly 400, the movement has been able to flourish and to promote charity works in a self-reinforcing loop where each chain reinforces the other with Xavier at the top. He was clearly not a “Sexy Sadie,” however; even in life Xavier, who lived modestly and never married, was already worshipped as a kind of ascetic saint. There is no evidence that the image of him upheld by his followers is not true. Nearly a decade after his death, and in the centenary of his birth, his life is being dramatized and promoted in major feature movies,[2] and it’s almost unthinkable to question Xavier’s public persona.

But a critical analysis of Chico Xavier’s paranormal claims quickly reveals their utmost frailty. I was myself surprised. Until I got a better look, I had always assumed Xavier’s claims had a kernel of truth. If they were not authentic paranormal phenomena, I thought they would at least prove unsolved and intriguing. On the contrary, that turned out not to be the case.

A close friend of mine, Vitor Moura Visoni[3], managed to get one of Xavier’s biggest and closest associates, Waldo Vieira, to clearly state that Xavier promoted hoaxes. Vieira should know because he was there.

“Workers from the Spiritist Center went to the line [of followers] to get details from the deceased. Or they used stories told by relatives in the letters where they asked for a meeting. The messages from Chico had this information,” Vieira revealed. That would explain his “psychographed” letters with details that “only the deceased had known.” More than cold reading, this was just plain hoaxing. There were other hoaxes, according to Vieira.

“I saw that [Xavier] was conducting some séances of which I was not part of … where they sometimes told of Scheila’s [the spirit] perfumes…. [Then] one day … he went to post something in the mail, … I went to his closet that had the door open and I intended to close it. When I got there, I saw a bag full of flasks…. He used the perfumes … it was of roses…. [I confronted him and] then Chico started to cry in front [of me].”

The use of scents allegedly of a supernatural origin was a common Spiritualistic trick. That the Spiritist leader and foremost “medium” in Brazil used them, according to one of his closest associates, is very revealing.

But nothing beats the case of Otília Diogo. 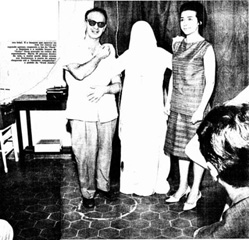 Just look at this photograph. Is that part of a comedy show? It may be funny, but not intentionally so. The photo was captured in 1964, and the man smiling in sunglasses is Chico Xavier himself. The person covered in white sheets is the medium Otília Diogo, or as Spitirists believe, the “materialization” of the spirit of sister Josefa in ectoplasm. Thanks to the mediumship of Otília Diogo, of course.

Other photos clearly show the medium behind the veil, and in fact, the veil had a rectangular semi-transparent part to allow Diogo to see. The alleged ectoplasmic materialization could be touched and also hold a heavy Bible. That’s very material indeed. And even believers noticed how the medium, Diogo, had a remarkable similarity to the face of the spirit.

And yet, they believed it. They still believe it. Xavier was there and he emphatically claimed the materializations were real and authentic. But the case would soon turn into turmoil.

The photos here were taken by Cruzeiro magazine, which had the utmost priority of selling more magazines. First promoting then exposing the hoax served them well. After first publishing an article where they left whether the “Uberaba materializations” were real open to interpretation, they then proceeded to expose the hoax they helped to promote.

And expose they did. With clear photos it’s obvious that the “materialization” is simply the medium Diogo in sheets. Believers even claimed the spirit went through solid steel bars, but the photos show that it was simply some sheets thrown to the other side, while the very solid (and alive) medium was behind them.

Cruzeiro couldn’t have had better news when in 1970, Otília Diogo was finally caught red-handed. She wanted to have her wrinkles removed with plastic surgery, and as a payment for the surgery, she offered to conduct materialization séances in the house of the doctor, a believer. But the doctor was not that gullible and was suspicious of the small briefcase she always had with her. When he and his family managed to open it while Diogo was sleeping, they found all the “ectoplasm,” that is, all the very material garments and veils she used to portray different spirits.

Her tools even included some perfume used “to reinforce the presence of the spirit.” Just like Xavier, according to Vieira.

Finally exposed in her fraud, what would Diogo say? “I lost my mediumship in 1965, but I thought I should keep performing materializations. I didn’t want anyone to notice.”

And people believe it. Most Spiritists in Brazil, when informed about Chico Xavier’s involvement with the case of Otília Diogo, firmly believe that although she was definitely a hoaxer, she only started to hoax shortly after the phenomena was witnessed and authenticated by Xavier. That’s an amazing example of cognitive dissonance.

Even though the photos taken during those 1964 séances clearly show a person using veils and are obvious evidence of the hoax, many still believe that ectoplasm works in mysterious ways—including looking exactly like a common veil. We skeptics are still arguing with believers who staunchly defend the case with elaborate arguments—all of which have been refuted—but the first and obvious impression that one gets from the photos is quite right. Those are quite simply ridiculous hoaxes.

Now, Waldo Vieira was also a witness during those séances, and he revealed that from the beginning they had their suspicions about Diogo. But he also claims that Diogo was also an authentic psychic, just as Xavier. Although a hoaxer at times, she also had extraordinary paranormal powers. The cognitive dissonance is complete.

Even if one accepts that these alleged mediums were hoaxers, the believer will convince himself that some of the phenomena must have been authentic. Paraphrasing the old quirky philosophical question, if a hoaxer is not caught hoaxing in the middle of the forest, did he hoax? To the believer, the answer is clear. The most elaborate and unthinkable arguments are presented to argue that those ridiculous hoaxes could, or even must, have been authentic.

Time and again one can find such examples, and the story of Otília Diogo, so famous in Brazilian Spiritism, is almost identical to the story of Florence Cook’s materializations of Katie King, which occurred almost a century earlier at the height if Victorian Spiritualism. She only started to hoax after the examination by William Crookes, the believers will argue. The Swiss contactee Billy Meier may have hoaxed some photos, but he must have started it after he had some authentic contacts with aliens from the Pleiades.

There’s much more in the story of Chico Xavier, certainly, since we didn’t even approach in any detail his main paranormal claim of 400 “psychographed” books. That’s for another opportunity.

But, as famous as he was for his moral guidance and spiritual messages published in hundreds of books, let’s end with a particularly interesting snippet: “The truth that hurts is worse than the lie that comforts…. Those who can will understand this.”

[2] Many members of the Brazilian upper classes, including the entertainment elite, are Spiritists. It’s considered more refined than traditional Catholicism.

[3] The work by Visoni is freely available in Portuguese at http://obraspsicografadas.haaan.com/.

Kentaro Mori is a Brazilian skeptic with his own website, Forgetomori.