Someone is always trying to tell us what to eat. It’s like religions: they can’t all be right, and they might all be wrong. One of the most pervasive food myths is the idea of “superfoods,” the belief that certain foods are particularly good for us.

Obviously some foods have more of certain nutrients than others, but the idea of “superfoods” is just silly. No food is a perfect source of all nutrients. Yes, spirulina (blue-green algae) has an impressive array of nutrients; but spinach has even more.

In the past, eggs and milk have been touted as “perfect foods.” Eggs are low in calories and are a good source of high-quality protein and a whole list of other nutrients, but they contain no fiber or vitamin C. Breast milk is the perfect food for newborn infants, but it becomes inadequate in later infancy. It is lacking in iron, zinc, manganese, and vitamins A, C, D, and E. Breastfed babies need supplemental iron to prevent anemia. Milk is certainly not the perfect food for adults, especially those with lactose intolerance! 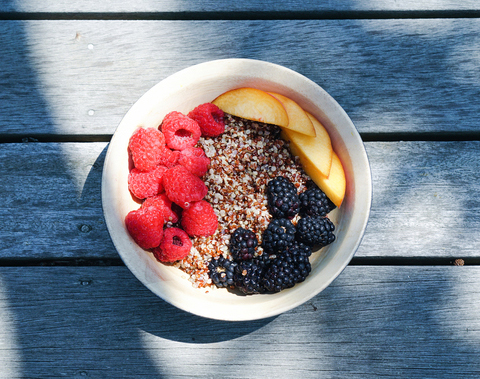 Gayelord Hauser claimed that five wonder foods would add years to life: skim milk, brewer’s yeast, wheat germ, yogurt, and blackstrap molasses. Cider vinegar has been promoted as a cure-all that keeps the body in balance, thins the blood, and aids digestion. Wheat grass is said to cleanse the body, neutralize toxins, slow the aging process, prevent cancer, and supplement body enzymes with plant enzymes. I’ve never tried it, but it looks putrid and I’ve been told it tastes even worse than it looks. “Anti-inflammatory” foods like kelp, blueberries, shiitake mushrooms, and wild Alaska salmon supposedly counteract heart disease, Alzheimer’s, Parkinson’s, cancer, and autoimmune diseases like rheumatoid arthritis. The scientific evidence doesn’t support any of those claims.

Açaí has been hyped as the number one superfood in the world. The claims: weight loss, increased energy, better digestion, improved sleep, enhanced mental health, stronger immune system, healthier skin, youthful appearance, detoxification benefits, improved circulation, and healthier heart. The evidence: zero. In fact, its antioxidant content is less than that of strawberries and grapes.

Açaí is only one of the many tropical and exotic fruits that are marketed as “superfruits.” Others include baobab, maqui, mangosteen, goji, sea buckthorn, jujube, cupuacus, pitayas, pomegranates, guava, dragonfruit, kiwi, lychee berries, and yumberries. At frequent intervals, yet another entrepreneur identifies yet another unfamiliar tropical fruit that can be imported and sold to gullible health nuts at exorbitant prices. I wonder what the next fad will be.

It started with superfruits but went on to include other superfoods. Here are three published lists of superfoods:

The third list is from the infamous Dr. Oz. Notice that there is very little overlap between these lists, and the only item that’s on all three lists is beans. All these foods are good sources of various nutrients, but there’s nothing special about them. Oranges are famous as a source of vitamin C, but a cup of chopped red bell pepper contains nearly three times as much vitamin C as a medium orange.

You may have noticed that most of the claims of health benefits for foods are rather vague. Unless a product has been approved by the FDA as a medicine, it is prohibited by law from making claims that it can cure, treat, or prevent any disease. One company falsely advertised that its elderberry juice could cure, treat, or prevent various disease conditions including AIDS, diabetes, and the flu. Its products were seized by the FDA.

Superfood lists disagree with each other and can include as many as 200 foods. If these were all superfoods, almost all foods would be superfoods, making the concept meaningless. So many healthy foods are left off the lists that you could eat a healthy diet while avoiding everything on the lists. Believe it or not, raw meat contains every essential nutrient, even vitamin C, which is destroyed when meat is cooked. For obvious reasons, I wouldn’t recommend a raw meat diet.

There’s no advantage to eating special, expensive, or exotic foods high in certain nutrients if you can easily get the same nutrients from other foods that are cheaper and easier to find. If you are eating a varied diet with an emphasis on plant foods, you are probably already getting all the nutrients you need, and there is no advantage to ingesting more. Excess amounts beyond what the body can use will just be excreted. Superfoods are silly, but Mom was right: eat your vegetables!