I'm taking a step beyond sciencey with the following topic. What happens when science doesn't cooperate with your subject area? Researchers of
unexplained events may get frustrated and disenchanted with the scientific process when the eyewitness accounts they collect are too weird to explain
via conventional means. They go unconventional. 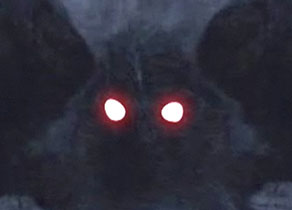 Captain Jean-Baptiste Duhamel led the hunt for a beast that was attacking and devouring victims in the Gevaudan, France, in 1794. He had
a problem. He could not catch and kill the man-eating monster. Being a proud man, he had to justify why he could not conquer this particular foe. Since the
option that he was an inadequate huntsman was not acceptable, the creature must be supernatural in its abilities to escape his capture. The
characteristics of the beast were exaggerated—it was huge, cunning, and not just an ordinary wolf. Captain Duhamel left defeated by what must truly be an
extraordinary beast.

The cognitive dissonance experienced by the French captain is reflected today by those who can't capture Bigfoot. When normal processes and causes fail to
satisfactorily explain events or answers to questions, then the reasoning slips beyond nature, into super nature, beyond the testable claims of science.

I call this "supernatural creep." Although, I swear I'm not the first one to name it as such. I searched to find where I have seen this referenced before.
(If anyone knows, please email me so I can give the originator due credit.) Once I noticed this kind of reasoning, I saw it frequently. Wherever I
come across this concept, it reveals a bit about human nature:

The effect of supernatural creep can be seen with UFOs, anomalous natural phenomena (Fortean topics), and in bizarre stories categorized as "high
strangeness" (which I'll explain a bit further on in this piece). A perfect example is that of "black dogs" whose appearance is spectral or demonic and
is associated with either protection from or nearness of bad spirits. Could it be just a big black dog? Witnesses perceive that it's more than that. When
the circumstances feel uncanny, we slip into thoughts of the supernatural. An enjoyable book that illustrates supernatural creep quite nicely is Three Men Seeking Monsters by Nick Redfern. Fun stuff.

With phantom black dogs, there is a connection to local legends and ghost stories. A modern example of the dispute about supernatural creep is evident in
the Bigfoot/Sasquatch community.

Bigfoot proponents generally fall into two camps: those who search for a real animal that functions as nature intended (called 'apers') and those who
entertain the option that the entity is not natural (paranormalists).

In their 2006 book, The Yowie: In Search of Australia's Bigfoot, authors Tony Healy and Paul Cropper appear to have a parting of the ways when
trying to explain all the Yowie accounts at face value—some of which, like our American Bigfoot are pretty bizarre. What is up with an animal that is
sometimes described as having three toes, sometimes four or five? And, after all this time, why can't we trap one or find a body? The creature has a
stupendous ability to escape human grasp by eluding our cameras and leaving only tenuous, dubious traces of its corporeal existence. It can run
outrageously fast and may be able to see infrared light. With the Yowie, we can't think of a way to get a wild man on the island continent. It seems so
implausible. But as Healy and Cropper note, it's uncomfortable to explain the Yowie as a paranormal entity, perhaps as a psychic phenomenon, because it
results in replacing one mystery with another. 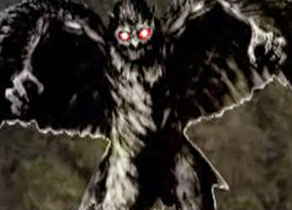 Characteristics of hairy hominids or other unidentified cryptids may be just marginally odd—avoiding detection for decades among people, expert at hiding
in plain sight, unusually developed senses of hearing or sight, fantastic strength or incredible speed. Or, they may get a bit spooky—glowing eyes,
inability to be photographed, immunity to bullets, seen everywhere but found nowhere. They get to the point where it's beyond natural—telepathy,
shape-shifting, apporting or dis-apporting, signaling illness or death. In
the case of some monster sightings, they are associated with UFO sightings, sychronicities, and time loss or distortion.

In order to hang on to the literal interpretation of eyewitness accounts, researchers may take tiny steps away from a purely natural explanation of their
quarry. If the animal is shot at close range, why is it not injured or killed? Instead of questioning the story (or the marksmanship of the gunman), the
assumption is that the thing must have some extra quality like bullet-proof skin, or perhaps it is impervious to bullets. If these stories are regarded as
valid, and more like it come along, instead of doubting the witness, the researcher concludes there must be something paranormal going on to
explain it.

The slip down the supernatural slope is really apparent when there are accounts of "high strangeness"—mind-boggling stories that have absurd elements. This
term was originally used by Dr. J. Allen Hynek to describe extremely peculiar UFO cases that appeared to be associated with dream-like details, such as
mysterious phone calls, electronic glitches, and Men in Black visits. If a report is one of "high strangeness," it's more than the typical "I saw a UFO" or
"I saw a Bigfoot" story. It turns into a "I saw a Bigfoot go into a UFO" story—a whole other level of weirdness that now strains a natural explanation, if
true.

And so it goes with Bigfooters. I recently read a blog post about a person who was rejected from the
Bigfoot Field Research Organization (BRFO) because he dared mention a telepathic experience related to a Bigfoot encounter. There are Bigfoot researchers
who discard reports that involve any paranormal or supernatural element because it sounds less credible to admit such ideas if they wish their work to be
taken seriously. (This is a bit weird for the BFRO, I thought, since Matt Moneymaker ascribes some incredibly bizarre, paranormal talents to Bigfoot like
the ability to "stun" people and immobilize them. I can't take his speculations seriously.)

In my last Sounds Sciencey post,
I noted that it appeared that the ghost investigation field seemed to be moving away from the sciencey focus and more into the supernatural, dealing with
demons, angels, and religious qualities of hauntings. Science is failing them, as well. In order to retain that important core that ghosts, or whatever
X-file, is real, the natural explanations are no longer suitable as explanations; it must be something beyond human understanding. The
cryptozoological community is sliding down a similar path
at the behest of authors like Redfern who think that the field should expand to include "zooform" phenomena—entities, not actual animals, that appear in
animal form. This would constitute a shift from scientific inquiry to a completely experienced-based view. How convenient. You gain great flexibility when
you discount natural laws.

You may be able to see the immediate problem with an experience-based view and accounts of high strangeness. Since many skeptical paranormal researchers
are very aware of the problems with eyewitness accounts, we notice the mistake certain non-skeptical researchers make when reading popular accounts of
local tales or Charles Fort’s collection of books. The writers take every detail of the witness at face value! We know, however, that
people mess up observations. We know that our memories are flawed, and we know that stories change over time, often becoming very
different from the original account. Stories are poor evidence. To build a conclusion on just these story elements means that you must reject the
foundation of knowledge we already have about how the world works (which is pretty well tested) and accept that there are visitors from other dimensions
harassing our rural population or that we are able to conjure up monsters just with our collective mind power. That’s absurd. I’ll need more than a few
good stories to accept that.

Supernatural creep is the way researchers hold onto their cherished ideas that a mysterious phenomenon, as they perceive it, is really out there.
Being too invested in the idea to let it go, they reinvent reality instead.

By the way, the Beast of the Gevaudan? It was wolves. They were only unusual in that they were really hungry and good at catching people and not getting
caught themselves. They were eventually dispatched. But the legend remains of the monsters of the Gevaudan. It's too good of a story to give up.

Smith, Jay M. 2011. Monsters of the Gevaudan: The Making of a Beast. Harvard University Press.