I recently discovered a disturbing fact: my home office is in the northwest corner of my house, which is very bad. Furthermore, I often sit in my home office facing northwest, which is also very bad. So said Los Angeles feng shui expert Carol Assa in a New York Times article published last year (Eng 2019). Assa said I might be able to improve the feng shui of my home by placing six feng shui coins tied with red string in the southwest corner of my house. While writing this column, I did buy six feng shui coins tied with red string, but I have no intention of putting them in the southwest corner of my home. I just thought they looked pretty. However, despite all these foreboding signs, I can take comfort from the fact that feng shui is an ancient Chinese pseudoscience with no evidence to support it (Matthews 2018). Maybe I won’t have to move my home office after all. 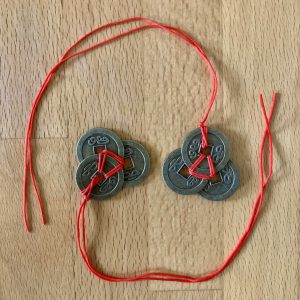 Feng shui is a belief system based on concept of chi (or qi), the life force that is a foundational concept in Chinese traditional medicine and purported to be present in humans and all nature. Feng shui is a form of geomancy that, when applied to residential houses, as well as to commercial and public buildings, suggests that the design of the building and its placement in the surrounding landscape will affect the fortunes and wellbeing of its inhabitants (Matthews 2018). In 1949, when the communists rose to power in mainland China, feng shui was labelled an unscientific, anti-Marxist superstition and outlawed. The crackdown intensified during the Cultural Revolution of 1966–1976. But feng shui remained popular in Hong Kong, Taiwan, and among Chinese populations outside of China. As the Chinese economy has opened up in recent decades, feng shui has regained popularity in the People’s Republic of China, particularly among the wealthy (Coonan 2011). Today there are several different schools of feng shui, and feng shui advisors offer their services throughout Asia but also in Europe and the United States. In addition to making recommendations about the setting and landscaping of a home, many feng shui consultants advise home owners on interior design in an effort to harmonize dwellings with the local flow of chi.

The remarkable rise of the Chinese economy has stimulated increased interest in consumer research on Chinese superstitions—particularly as they might be employed to increase profits. For example, red is a color associated with good luck in Chinese culture. Wedding dresses are often red, as are many other objects. Researchers Thomas Kramer and Lauren Block (2007) have shown that if a rice cooker were to fail, customers would give a red cooker a higher satisfaction rating than a neutral green cooker.

A brief aside about 8. The number eight is remarkably pervasive in Chinese society due to its association with good luck. The opening ceremonies of the 29th Summer Olympics in Beijing started at 8:08 p.m. on August (the eighth month) 8, 2008 (Kramer and Block 2007). Similarly, in 2003, Sichuan Airlines bought the phone number 8888-8888 (eight eights) at auction for the equivalent of $280,000 (Vyse 2019). They intended to use it as their customer service number.

It is clear that retailers are conscious of the superstitious implications of their product pricing. One study recorded the prices of products advertised in several newspapers from Shanghai, Taiwan, and Hong Kong. Sampling a total of 499 items, the researchers found that advertised prices ended in eight significantly more than any other digit—on 39.9 percent of items. Prices ending in the number four were the least likely, occurring on 1.4 percent of items, a rate significantly lower than the ten percent expected by chance (Simmons and Schindler 2003). Finally, a recent study of transactions on the Hong Kong Stock Exchange showed that traders were particularly attracted to stock trades with lot numbers ending in eight, despite the fact that lot numbers are assigned arbitrarily (Chen et al. 2019).

Buying a home is one of the most important financial decisions a person can make, and subscribing to Chinese superstitions can make it even more costly. A number of studies have attempted to identify the variables that are important in the Chinese housing market. Hong Kong has been an excellent laboratory for this research for two reasons: (1) it is a hotbed of traditional Chinese superstitions and (2) much of the housing is in high-rise apartments. This last point makes it easy to look at the effect of lucky and unlucky floors on the price of Hong Kong apartments. According to tradition, apartments on floors 4, 14, 24, 34, etc., would be considered bad luck, and apartments on floors 8, 18, 28, etc., would be good luck. It appears that floor number is an important variable in Hong Kong real estate, but the research findings have been somewhat inconsistent. For example, a study published in 2001 (Chau et al. 2001) showed that, in housing boom periods, home buyers were willing to pay 2.8 percent more for an apartment on a floor ending in eight. They found no effect of unlucky floor numbers. In contrast, a study published six years later found no effect of lucky floor numbers but significant negative effect on price of floor numbers ending in four (Choy et al. 2007). Go figure.

A more recent study using houses, rather than apartments, appears to show a much clearer effect of lucky numbers in real estate market for Chinese customers. The researchers used data on approximately 117,000 house transactions combined with census data for several neighborhoods in the Vancouver area, which is home to a large number of Chinese immigrants (Fortin et al. 2014). The researchers found that, even without controlling for the number of Chinese residents in the area, houses with addresses ending in four were 3.1 percent lower in price than average and those ending in an eight were 3.4 percent more expensive. Furthermore, for each additional percentage of Chinese residents in a neighborhood, the superstitious effect of fours increased by 5.5 percent and of eights by 6.4 percent. In non-Chinese neighborhoods, there was no effect of either of these numbers on housing prices.

A 2012 study conducted in Taiwan examined six features of a home that are thought to bring bad feng shui (Lin et al. 2012):

Bad Feng Shui Features 1. Lu-chun, which means the house is at the end of a street facing directly down the street.

2. The house is on a dead-end road. It is thought that because the street lacks a free flow, it may acquire stagnant chi.

3. Near a viaduct. A house near a viaduct will appear to be cut by the viaduct, making the people inside uncomfortable (Lin et al. 2012, 334).

4. Near a cemetery or funeral parlor. The house may acquire yin-chi, a bad form of chi that accumulates around the dead.

5. Near a temple or shrine. Chinese people burn money printed on joss paper—a coarse paper typically made from bamboo—in the temple as an offering to ancestors. It is thought that this activity can pollute the nearby air.

6. On the fourth floor. Four is an unlucky number.

The researchers found that out of these six variables, five had statistically significant negative effects on home prices in Taiwan. The prices for homes with lu-chun were lower than those without lu-chun, but the effect was not significant. In addition, the researchers found that, in general, the effects of feng shui on real estate prices were larger on more expensive homes, a finding that is consistent with past results.

A brief video of a Taiwanese family burning joss paper “ghost money” at a temple.

It is clear that feng shui is deeply imbedded in Chinese culture and has a powerful effect on Chinese customers in the real estate market. If you were a shrewd non-superstitious buyer, you could get a bargain on a 44th floor apartment in Hong Kong, but if you are at all concerned about resale value, you might want to think twice. As the number of wealthy Chinese has grown, many are buying real estate in the U.S., and as a result, the principles of feng shui are playing a larger role in the market here. A 2015 New York Times article reported that when a Dallas real estate broker made videos of his properties to send to China, he brought a compass with him so that he could prove that a house had the north-south orientation required for good feng shui (Searcey and Bradsher 2015). Other real estate offices employ feng shui consultants to assist their customers.

For those who would like to see less superstition in the world, feng shui and other Chinese superstitions appear unlikely to disappear any time soon because they so completely saturate the economic environment. In European culture people fear black cats, the number thirteen, and walking under ladders, but Western traditional superstitions are rarely harnessed for financial gain. In contrast, the color red, lucky and unlucky numbers, and the principles of feng shui are everywhere in Chinese culture, and they have powerful financial implications. In the immortal words of Groucho Marx, “Love flies out the door when money comes innuendo.” The same could be said for science and reason. Superstition is very difficult to combat when it is supported by the profit motive.

As for my office in the northwest corner of my home, the recommendations Carol Assa, the LA feng shui expert, made were for 2019 (Eng 2019), which happened to be a remarkably good year for me and particularly good for the things I produced in my home office. Assa may have different recommendations for 2020, but I don’t think I’ll bother to consult her.